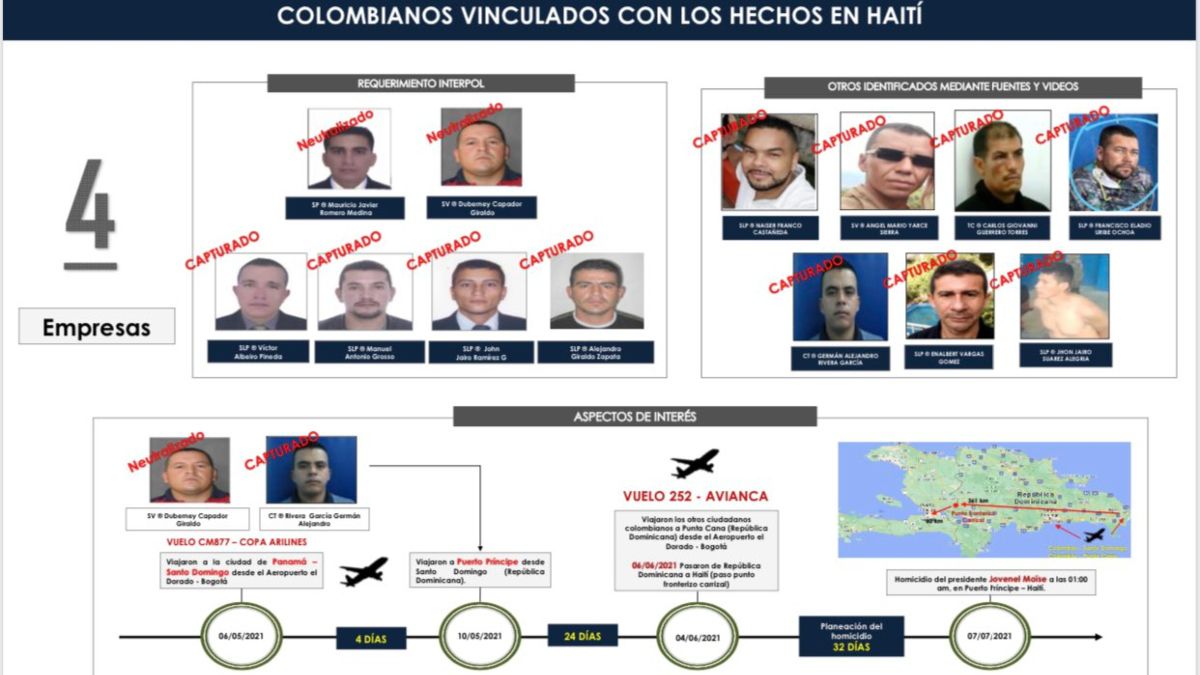 The assassination of Jovenel Moise, the president of Haiti, was perpetrated by a command of 28 people, of which 26 are Colombian nationals.

The Colombian authorities are investigating four companies that allegedly recruited the perpetrators of the assassination of the president of Haiti, Jovenel Moise, and confirmed the identity of the mercenaries, of whom at least 13 are retired military personnel.

The director of the Police, General Jorge Luis Vargas, assured this Friday in a press conference that they are investigating four companies, "if they exist" and that they would have done "the recruitment, the grouping of these people" and organized the trips of the mercenaries to the Dominican Republic, from where they reached Port-au-Prince.

The official said that the names of the companies cannot be revealed because "we are in verification" and "this is precisely part of the clarification."

The Haitian police reported that the assassination of Moise was perpetrated on Wednesday by a command of 28 people, of which 26 are of Colombian nationality and another two are Americans of Haitian origin.

"What we are doing here is clarifying the facts. So far (...) we have no motivations," he said.

At the moment, 17 people have been arrested for their alleged direct participation in the attack, including 15 Colombians already identified by the Andean country's authorities and the two Americans.

Three other Colombian citizens died during shootings with the security forces, according to the first official balance in which the nationality of the alleged mercenaries was revealed.

Both General Vargas and the commander of the Military Forces, General Luis Fernando Navarro, explained that there are at least 13 retired Colombian soldiers involved in the assassination.

"The verifications that we have made in their resumes are that their withdrawals occurred between 2018 and 2020, that is what has been recorded. The motivations in the mercenary market (...) are around purely economic issues, we presume us and that is what we have been able to verify so far, "the officer explained.

Along these lines, he stated that one of those arrested in Port-au-Prince was appearing before the Special Jurisdiction for Peace (JEP), created by the agreement signed by the Government and the FARC in 2016, and although he did not specify for which crimes he was responding, versions of The press indicates that he did them for the executions of civilians known as "false positives".

On the other hand, General Vargas revealed that the retired soldiers Duberney Capador Giraldo and Germán Alejandro Rivera García, the first killed and the second detained, entered Haiti on May 10 by air after having spent four days in the Dominican Republic.

The rest of the Colombian mercenaries, according to information from the Police, arrived in Punta Cana (Dominican Republic) on June 4 and on the 7th of the same month they moved to Haiti through the Carrizal border crossing.

The murder of Moise has caused an international commotion and has prompted the Haitian government to declare a state of siege for a period of 15 days.