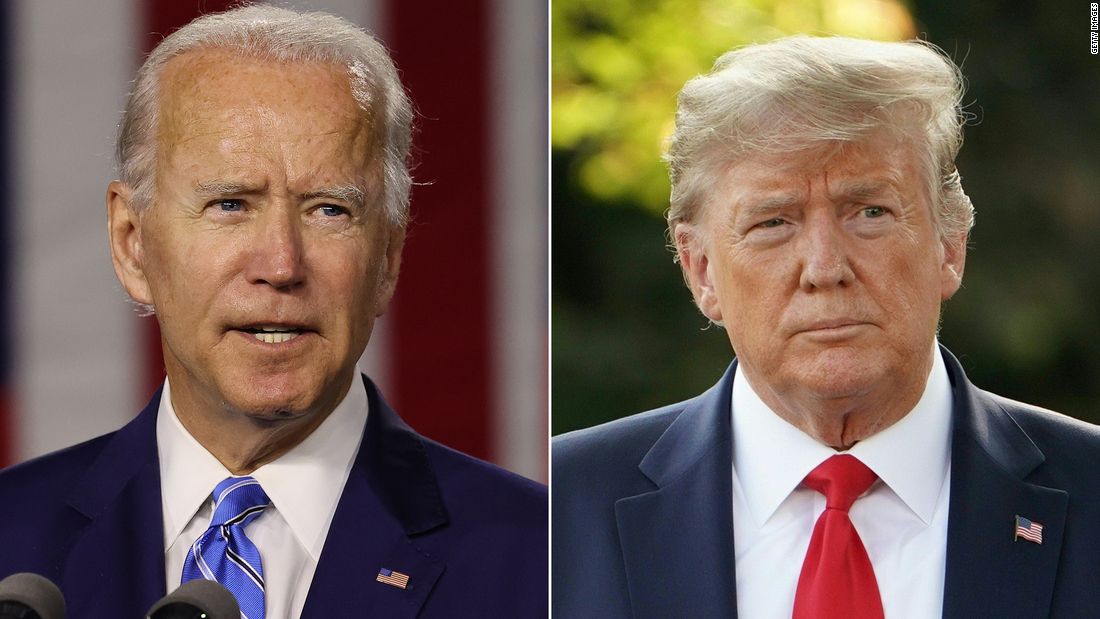 With the race for the presidency approaching its end amid a raging pandemic, Democratic nominee Joe Biden maintains a substantial lead over President Donald Trump nationwide, according to a new CNN Poll conducted by SSRS.
Among likely voters, 54% back Biden and 42% Trump. Biden has held a lead in every CNN poll on the matchup since 2019, and he has held a statistically significant advantage in every high-quality national poll since the spring.

Although the election will ultimately be decided by the statewide results, which drive the Electoral College, Biden's lead nationally is wider than any presidential candidate has held in more than two decades in the final days of the campaign.

The poll offers no indication that Trump's four-year-long campaign for reelection has managed to garner him substantial new supporters since his narrow win in the 2016 election.

Barring major changes in the landscape in the final days of the race, Trump's chances for closing the gap are deeply dependent on Election Day turnout. The poll finds that among those who have already voted (64% Biden to 34% Trump) or who plan to vote early but had not yet done so at the time they were interviewed (63% Biden to 33% Trump), Biden holds nearly two-thirds support. Trump leads 59% to 36%, though, among those who say they plan to vote on Election Day.

The demographic chasms that have defined the nation's politics in the last four years remain in place. Women break sharply for Biden, 61% to 37%. Among men, it's a near-even split, 48% for Trump and 47% for Biden. Voters of color support the Democrat by a nearly 50-point margin, 71% to 24%, while White voters split 50% for Trump to 48% for Biden.

Those near-even numbers among men and among White voters mask significant divides by education among Whites and by race across genders. Women of color (77% Biden to 21% Trump) and White women (54% Biden to 45% Trump) both break for Biden, as do men of color (64% Biden to 28% Trump). White men, however, favor Trump by 56% to 41%.

And seniors, who shifted in the Democrats' direction in the 2018 election, are solidly in Biden's corner in this poll. Overall, 55% of likely voters age 65 or older back the Democrat, 44% Trump.

Biden also leads by a broad margin among voters under age 35 (68% Biden to 30% Trump), while voters between the ages of 35 and 64 are split about evenly between the two candidates (48% back each candidate).

The numbers have scarcely budged in the last year, with the approval number ranging between 40% and 45% in all but one of the 12 polls CNN has conducted since October 2019. The numbers now are also hardly different from Trump's first approval rating in CNN polling in 2017, when 44% approved and 53% disapproved.

All of the data point to an election that is a referendum on an unpopular President, and a sizable share of both candidates' supporters are making their decisions based on their feelings about Trump.

Among Biden's supporters, 48% say their vote is more against Trump than for Biden, while 48% say it is for Biden rather than against the President. Though that is still a large anti-Trump vote, that's a shift in favor of a pro-Biden vote compared with polling earlier in the cycle. On the other side, almost 8 in 10 Trump supporters (79%) say that their votes are in support of the President rather than against Biden (17%).

Yet, the Trump campaign's messaging in the final weeks of the campaign has been relentlessly negative about Biden. The poll suggests it is making little difference in perceptions of the former vice president.

In 2016, voters who held unfavorable views of both Trump and Democratic nominee Hillary Clinton broke sharply in Trump's favor, according to exit polls.

Biden maintains advantages over Trump as the candidate more likely to unite the country (60% Biden to 34% Trump), who is more honest and trustworthy (54% to 37%), who cares about people like you (54% to 40%) and who will keep Americans safe from harm (52% to 45%). Likely voters are divided, though, over which candidate has the stamina and sharpness to be president (47% say Trump does, 46% Biden), a point of focus for Trump, who has hit Biden over his age throughout the campaign.

Likely voters are more likely to consider a candidate's positions on the issues important to their vote than they are the candidate's leadership and personal qualities. But the subset that is focused on personal qualities breaks sharply to Biden (71% support Biden, 27% Trump), while those who say issues are more critical favor Trump (54% Trump to 43% Biden).

More generally, a majority of likely voters see Biden's policy proposals as likely to move the country in the right direction (53%), while most say Trump's proposals point in the wrong direction (53%).

And all of this plays out against the backdrop of a spiking coronavirus pandemic. Eight months after much of the country shut down to slow the spread of the virus, 50% of Americans say the worst of that outbreak is still yet to come. Only half say they are comfortable returning to their regular routines. Additionally, 40% say the economy is still in a downturn due to the virus, while just 29% say the economy is starting to recover.

On all of these measures of where the country stands in the fight against coronavirus, Biden voters and Trump voters hold completely opposite views.

The CNN Poll was conducted by SSRS October 23 through 26 among a random national sample of 1,005 adults reached on landlines or cellphones by a live interviewer, including 886 likely voters. Results for the full sample have a margin of sampling error of plus or minus 3.6 percentage points; it is plus or minus 3.8 points for results among likely voters.
#Donald Trump  #Joe Biden  #Coronavirus
Add Comment