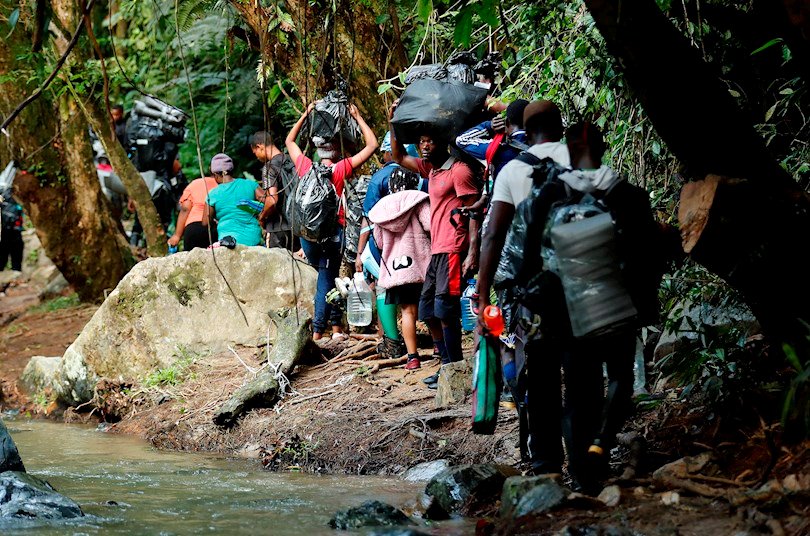 Each migrant must pay about 400 dollars to this criminal group to be transferred to Panama. If they do not have the money, they can transport between 2 or 3 kilos of cocaine to introduce it into the country.
The Colombian police discovered that the Clan del Golfo It is not only dedicated to drug trafficking, it also develops operations for the illegal trafficking of migrants to Panama, according to the report of newsrcn.com.

It was learned that the clan controls the smuggling of migrants from Urabá.

According to the information, each migrant must pay about 400 dollars to this criminal group to be transported to Panamain a journey of about 5 days.

Then each illegal migrant will cost you another 50 dollars to be transported from Necocli, to Acandí, through boats The journey is approximately 1 hour.

After arriving at the place They are taken by motorcycle to a village called La Teca. That transfer adds another 50 dollars more per migrant.

According to a witness, about 160 migrants, mainly Africans, Venezuelans and Asians They cross the route daily.

The route that is followed after arriving at La Teca is done on foot for a period of about two and a half days, according to the report of the Colombian television station. Once in Panama, migrants are charged between 200 and 300 dollars.

The Colombian Police have recorded the departure of nearly de 4,682 illegal migrants through Urabá Antioquia, which has generated income for the Clan del Golfo for more than 1.5 million dollars.

The mode of operation of Clan del Golfo also allows migrants to act as transport mules for between 2 and 3 kilos of cocaineif you do not have enough money to pay for the $400 that transportation represents.

The DDirector of the Colombian Police, Jorge Luis Vargas, identified two criminals – alias “Rayo” and “El Negro Perea” as the leaders who handle the illegal smuggling of migrants to Panama.

Under the command of “Rayo” there would be 61 armed men who would operate in Necocli, Antioquía, and with “Negro Perea” he would work with 60 men in the community of Acanlí in Chocó.
Add Comment