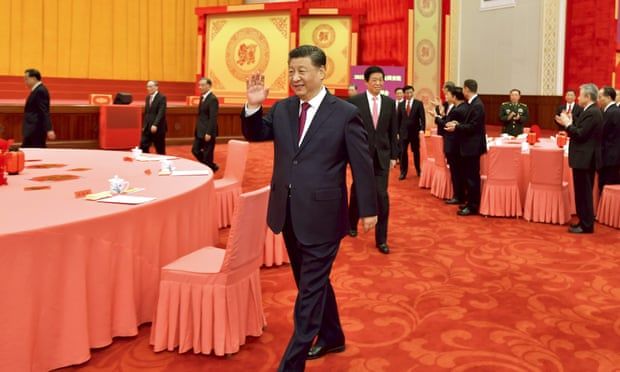 China more ‘brazen and damaging’ than ever, says FBI director

The threat to the west from the Chinese government is “more brazen, more damaging” than ever before, FBI director Christopher Wray has said, accusing Beijing of stealing American ideas and innovation and launching massive hacking operations.

The speech at the Reagan Presidential Library in California on Monday amounted to a stinging rebuke of the Chinese government just days before Beijing is set to occupy the global stage by hosting the Winter Olympics.

In another salvo from the US towards China on Monday, billionaire George Soros said Chinese president Xi Jinping was the “greatest threat” to open society throughout the world. However, he added in his speech that the crisis engulfing China’s “unsustainable” property market could be the downfall of Xi, along with other mounting problems such as containing Omicron, the pursuit of total social control, and a plummeting birthrate.

Wray’s remarks made clear that even as American foreign policy remains consumed by Russia-Ukraine tensions, the US continues to regard China as its biggest threat to long-term economic security.

“When we tally up what we see in our investigations, over 2,000 of which are focused on the Chinese government trying to steal our information or technology, there’s just no country that presents a broader threat to our ideas, innovation, and economic security than China,” Wray said, according to a copy of the speech provided by the FBI.

The bureau is opening new cases to counter Chinese intelligence operations every 12 hours or so, Wray said, with Chinese government hackers pilfering more personal and corporate data than all other countries combined

“The harm from the Chinese government’s economic espionage isn’t just that its companies pull ahead based on illegally gotten technology. While they pull ahead, they push our companies and workers behind,” Wray said. “That harm – company failures, job losses – has been building for a decade to the crush we feel today. It’s harm felt across the country, by workers in a whole range of industries.”

Chinese government officials have repeatedly rejected accusations from the US government, with the spokesperson for the embassy in Washington saying in July last year that Americans have made “groundless attacks” and malicious smears about Chinese cyber-attacks. The statement described China as a “staunch defender of cybersecurity”.

The threat from China is hardly new, but it has also not abated over the past decade.
“I’ve spoken a lot about this threat since I became director” in 2017, Wray said. “But I want to focus on it here tonight because it’s reached a new level – more brazen, more damaging, than ever before, and it’s vital, vital that all of us focus on that threat together.”

‘The system is built on credit’

Speaking at a Hoover Institution panel on China, Soros said the victory of open societies “can’t be taken for granted” in a world teetering on the edge of military aggression in Ukraine and Taiwan.

However, Xi Jinping’s attempt to impose “total control” on China through a strategy of city-wide lockdowns, could jeopardise his chances of staying in power, Soros claimed, because they are “unlikely to work against a variant as infectious as Omicron”.

Despite Xi’s firm control over the military and his tools of repression and surveillance, Soros said that it should not be assumed, given strong internal opposition, that the president will stay in power. He rules by “intimidation” and “nobody dares to tell him what he doesn’t want to hear”, he said.

The Soros comments appeared timed to coincide with the run-up to the Winter Olympics, although several countries – including the US and UK – will not be sending any diplomats in protest at human rights abuses in Xinjiang and elsewhere.

Soros also argued that the world’s second-biggest economy has become too dependent on using “unsustainable” property development to power growth since Xi took power in 2013.

The sector that accounts for about 30% ofChinese economic output was faltering with high-profile failures such as Evergrande spreading throughout the industry, leaving “people’s confidence shaken” and the economy struggling, he said.

Add in the disruption caused by trying to stamp out every case of the Covid-19, and a falling population that will lead to labour shortages, and China’s economic growth could not be taken for granted.

“The model on which the real estate boom is based is unsustainable. People buying apartments have to start paying for them even before they are built. So, the system is built on credit. Local governments derive most of their revenues from selling land at ever-rising prices.

The fall in prices already under way in many parts of China “will turn many of those who invested the bulk of their savings in real estate against Xi”, Soros claimed.