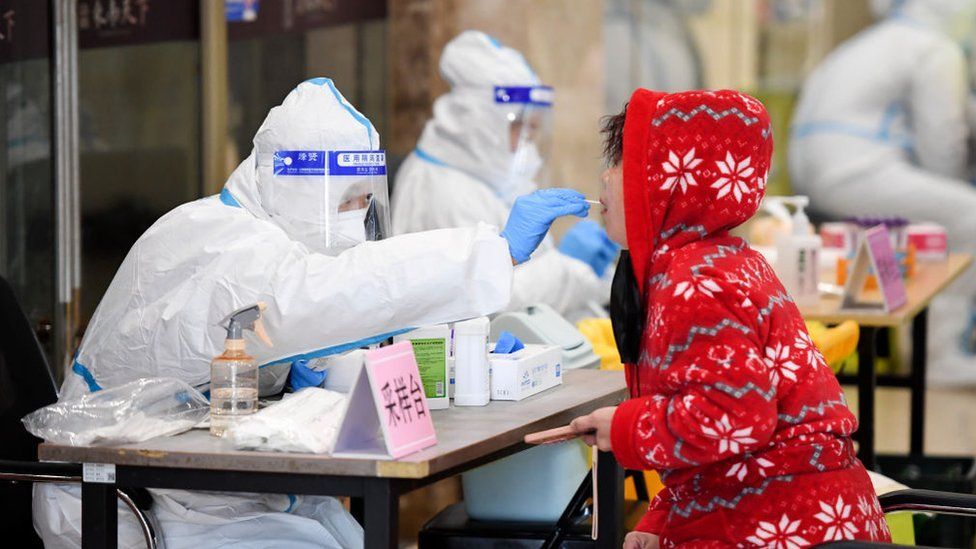 Multinational companies have halted some operations as China widens its Covid lockdowns - among its biggest since the start of the pandemic.

Tens of millions of people across the country face restrictions, including the entire Jilin province and technology hub Shenzhen, as authorities report record numbers of cases.

Toyota, Volkswagen and Apple supplier Foxconn are among the firms affected.

The lockdowns have raised concerns that crucial supply chains may be disrupted.

China on Tuesday reported a record high of more than 5,000 cases, most of it in Jilin.

All 24 million residents of the north-eastern province were placed under quarantine orders on Monday. It is the first time China has restricted an entire province since the Wuhan and Hebei lockdown at the beginning of the pandemic.

Jilin residents have been banned from moving around, and anyone wanting to leave the province must apply for police permission.

It came a day after a five-day lockdown was placed on the 12.5 million residents of the southern city of Shenzhen, with all buses and subway services suspended.

On Tuesday authorities in Langfang city which borders the capital Beijing, as well as Dongguan in the southern province of Guangdong, also imposed immediate lockdowns.

Businesses in many of the affected regions have been told to close or have their employees work from home, unless they supplied essential services like food, utilities or other necessities.

Foxconn, which manufactures iPhones for Apple, stopped its operations in Shenzhen on Monday, saying the date of resumption would "be advised by the local government".

But it has several production sites in China and told the BBC it had "adjusted the production line to minimise the potential impact". Its plant in Zhengzhou - the world's largest iPhone factory - remains open, as the city was not hit by the restrictions.

Toyota, which shut its factory in Changchun city in Jilin province, did not give a timeline for when business would resume. The Japanese carmaker told the BBC that the move was made to consider the "impact of supplier operation", and the "safety and security of employees and related parties".

German carmaker Volkswagen also shuttered operations in Changchun, saying production of Volkswagen and Audi cars and their components was "affected", but that it hoped to reopen its factory on Thursday.

On Tuesday the Shanghai Composite lost 5% and the Hang Seng index, where several Chinese technology giants are listed, fell more than 6%.

Analysts believe that firms would be able to manage the disruptions. "Such lockdowns have happened before, and [cities] have re-opened within a short period of time once the number of Covid cases were within control," Yeang Cheng Ling, senior investment strategist at Singapore's DBS Bank, told the BBC.

UBS analyst Grace Chen said Shenzhen was not a "major" production site for suppliers, but it would be worrying if the lockdowns extended to Shanghai and surrounding areas as the region is a key manufacturing hub for notebooks, servers and smart devices.

It feels like China has gone backwards. Two years backwards. To the early days of the outbreak that first emerged here.

Drastic measures are being imposed - again - on a large scale, to try to contain the virus. An entire province has been sealed off.

The lockdown of Jilin is similar in so many ways to Hubei in early 2020; the area of China where it all began.

Shenzhen, the globally important tech hub (where your iPad was most likely made) is also a city in lockdown.

Shanghai - where I am writing this - home to 24 million people, is a nervous place. All schools are closed, children are learning online, increasingly people are working from home.

Some compounds where people live are enforcing strict rules on who can come in. Deliveries are being sprayed with disinfectant again at the gates.

It's all part of the ongoing effort to maintain/retain/regain China's "dynamic zero-Covid" strategy - a goal that has been boosted by the mass roll-out of China's homemade vaccines, and that has been helped hugely by effectively shutting China's borders.

But now that goal is being significantly undermined by the Omicron variant.

China has seen relatively fewer cases of Covid due to its strict zero-Covid policy, where it resorts to rapid lockdowns, mass testing and travel restrictions whenever clusters have emerged.

However the rapid transmissibility of the Omicron variant has made sticking to that approach increasingly challenging.

Since the start of the year, China has reported more domestically transmitted cases than in the entire 2021.

Top Chinese infectious disease expert Zhang Wenhong has called the recent outbreaks "the most difficult period in the last two years of battling Covid" and that they were still in "the early stage of an exponential rise", in an online post widely circulated on social media.

But he added that while it was necessary for China to maintain its zero Covid strategy to control the outbreaks for now, "this does not necessarily mean we will continue implementing the strategy of lockdowns and mass testing forever".