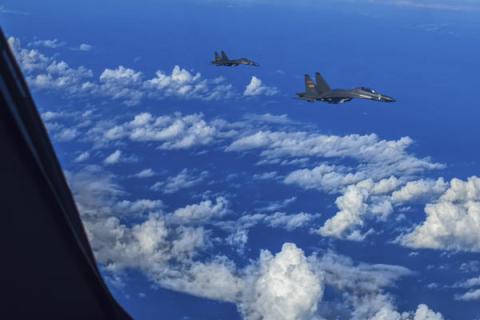 China Blasts US Defense Bill While Taiwan Welcomes It

China blasted an annual US defense spending bill for hyping up the “China threat" while Taiwan welcomed the legislation, saying it demonstrated US support for the self-governing island that China says must come under its rule.
“China deplores and firmly opposes this US move,” the Foreign Ministry said in a statement posted online Saturday, calling the new law a serious political provocation that blatantly interferes in China's internal affairs.

President Joe Biden signed the $858 billion defense bill into law in Washington on Friday. It includes about $45 billion more than Biden had requested as lawmakers look to offset inflation and boost the nation’s military competitiveness with China and Russia, The Associated Press said.

The bill also repealed a COVID-19 vaccination requirement for US troops.

In the Indo-Pacific region, the legislation authorizes increased security cooperation with Taiwan and requires expanded cooperation with India on emerging defense technologies, readiness and logistics.

A Taiwan Foreign Ministry statement thanked the US Congress “for showing the great importance it attaches to Taiwan-US relations and strengthening Taiwan’s security.”

China objects to US support for Taiwan, an island of 23 million people off its east coast. The two split during the civil war that brought the communists to power in China in 1949.

The Chinese Foreign Ministry statement said the US defense bill “severely affects peace and stability across the Taiwan Strait."