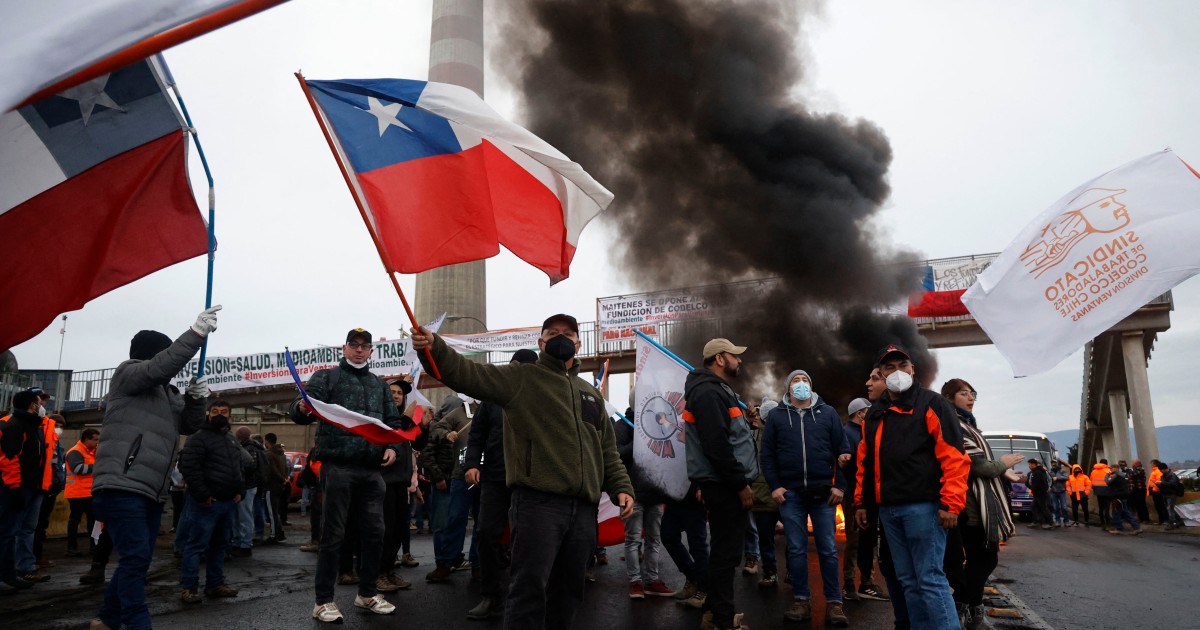 The strike follows government decision to close a foundry to curtail pollution in community.

Workers at Chile’s state mining company Codelco – the largest producer of copper in the world – have launched an open-ended strike in protest of the government’s closing of a foundry to curtail pollution.

At least 18 people were arrested after the strike began on Wednesday. Workers gathered at six mining facilities around the country, blocking the entrances and setting tyres on fire. Among the facilities targeted was the Ventanas foundry, which the government announced last week that it would shut down after a series of sulphur dioxide poisonings were reported in the area.

Union officials have described the closure of the foundry, located about 140 kilometres (87 miles) west of the capital Santiago, as “arbitrary,” and are demanding the government invest $54m to bring the plant up to the highest environmental standards.

Union leaders said the strike had paralysed Codelco, although Finance Minister Mario Marcel minimised the effect, saying it had “altered” production but not shut down operations.

“There is no stoppage of mining sites,” Marcel said at a news conference, hours after the strike started. “Therefore, the impact on financial income is basically zero.”

The Federation of Copper Workers (FTC), an umbrella group of Codelco’s unions, said 50,000 workers were expected to strike, including staff and contractors after the Ventanas smelter was shuttered despite calls for investment to keep it open.

“We already have all divisions stopped today,” Amador Pantoja, the union’s president told Reuters. “We’re going to wait calmly in the morning to see if there’s a chance to talk.”

The FTC has said the strike will cost Codelco – which produces approximately 8 percent of the world’s copper amounting to 10-15 percent of Chile’s gross domestic product (GDP) – $20m a day. Marcel also contested that figure.

The decision to close the Ventanas foundry followed an incident on June 9 when 115 people, mostly school children, suffered sulphur dioxide poisoning, forcing the closure of schools in the area. It was the second such incident in three days.

Greenpeace described the area around the Ventanas plant as “Chile’s Chernobyl” following a serious incident in 2018 when about 600 people in the city of Quintero and the town of Puchuncavi received medical treatment for symptoms including vomiting blood, headaches, dizziness, paralysis of their extremities and strange red marks on children’s skin.

The area, home to about 50,000 people, has suffered high pollution since the government in 1958 moved to convert it into an industrial centre that now hosts four coal-fired power stations and oil and copper refineries.

“We don’t want any more areas of [environmental] sacrifice,” he said.

“There are now hundreds of thousands of people who live in our country exposed to severe degradation of the environment that we have provoked or allowed and, as a Chilean, that makes me feel ashamed.”

On Wednesday, Government spokeswoman Camila Vallejo said Santiago remains open to dialogue but that it was focused on “a more sustainable model of development.”

“Our standards are very low and if we truly want to meet our environmental commitments we have to be guided by” World Health Organization (WHO) standards, she said.