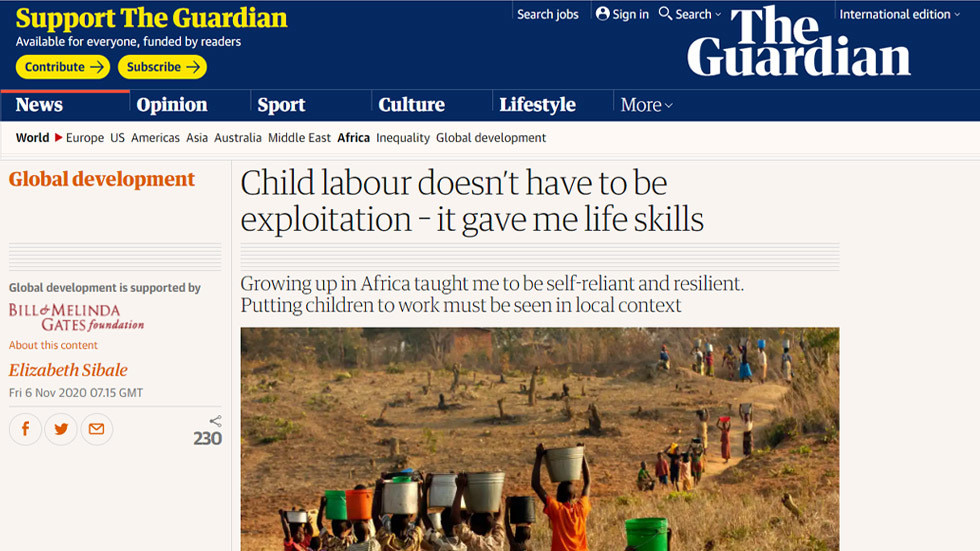 Child labor may be good, Bill Gates-funded article in The Guardian bizarrely argues

Doing chores for your family is a form of child labor, so not all child labor is actually bad, says an article in The Guardian, published on Friday in a section sponsored by the Bill and Melinda Gates Foundation.

The provocative piece was penned by Elizabeth Sibale, a Malawi-born woman working for the international consultancy firm Palladium. In it she touts her childhood experience doing hard work for her family – carrying water, preparing food and babysitting her younger sister – as an example of work that helped her acquire skills vital for adult life and to build character.

“Where do you draw the line between what is internationally deemed a crime and a natural process of transferring skills?” Sibale wrote. “With the exception of large organisations putting children to work, local context is everything.”

The opinion piece was apparently built on discussions at a seminar held last month by Palladium. The point that cultures have different norms on what work should be considered appropriate for a child is hardly debatable.

The International Labor Organization (ILO) says work done by a minor is a form of child labor only if it is hazardous or interferes with getting education. The crux of the issue is how to treat dirt-poor parents, who keep their kids out of classrooms because they are needed to support the household. Sibale and her colleagues argue that westerners should mind their cultural biases when looking at domestic chores.

The article’s headline as well as the logo of the Bill and Melinda Gates Foundation, which funds the Guardian’s “Global development” section in which it was printed, have not helped foster a nuanced debate, however. For many readers, it apparently looked a lot like Western billionaires paying a newspaper to whitewash exploitation of poor African nations.

billionaire-funded ‘child labor is good’ takes has to be a new stage of capitalist dystopia pic.twitter.com/yfXOe6A1gJ

FAO has a very clear guidelines on child labour in agriculture and helping on a family farm. Don't conflate the two! pic.twitter.com/eriKUBy5As

Needless to say, bringing rural communities relying on primitive farming out of poverty and into a state where their children can be spared hard work is a monumentally hard task. The ILO considers schooling a crucial part of resolving the problem, because unschooled kids tend to grow up to be unskilled adults, with little hope of turning their lives for the better, economically speaking.

Sibale, according to her interview with the Malawi publication The Nation, is a living testament to the merits of education. The seventh child of eight, her family could afford to send her to college and obtain a degree. It opened for her a path to a career in the national ministry of agriculture, a PhD in the US and awards from the World Bank and the International Monetary Fund.