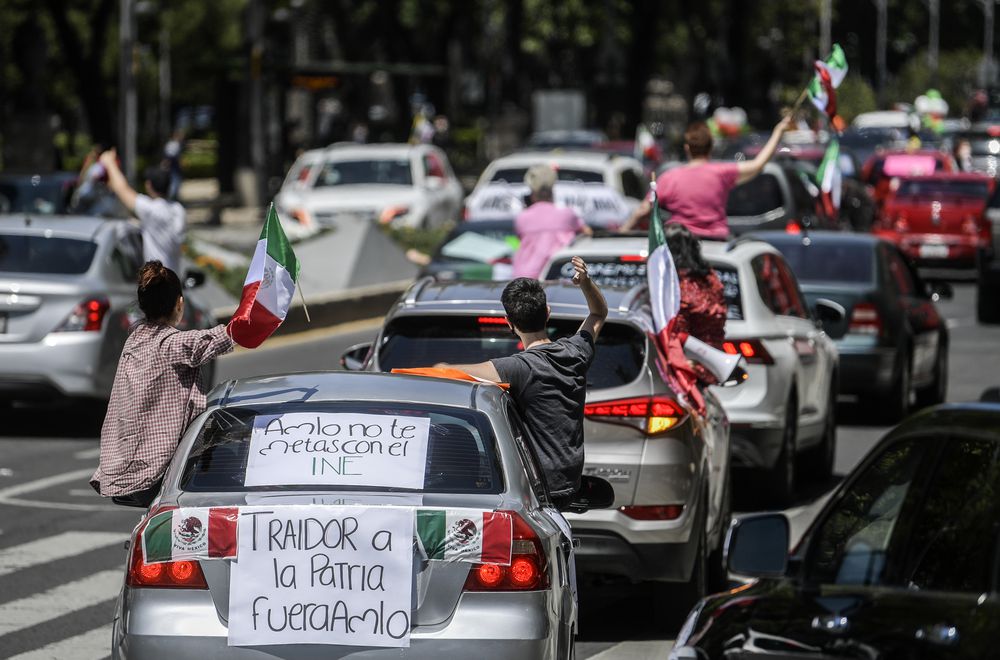 Hundreds of cars toured Mexico City this Sunday to demand the resignation of President Andrés Manuel López Obrador, in a new call for opposition groups that reject his policies and his management of the coronavirus pandemic .
At least 300 cars and some thirty motorcycles and bicycles formed the noisy convoy that traveled the Reforma Avenue, in a call by the National AntiAMLO Front (Frena) and other opposition groups, which for the third consecutive week showed their disagreement with the government policies of the Leftist president, in power since December 2018.

"We want him (López Obrador) to resign because he destroyed the country, one of the richest in the world! There is no more deadline," Guillermo García, a 59-year-old employee and participant in the protest, told AFP.

The caravan sought to express its repudiation to AMLO - an acronym by which the Mexican president is known - whom they accuse of putting "the sovereignty, integrity and independence" of the country at risk during the health emergency.

The organizers said that the rolling protest was also called in cities such as Puebla, Cuernavaca, Querétaro, Acapulco, Monterrey, Guadalajara, Chihuahua, Cancún and Mérida, among others.

In Mexico City, the caravan left at 11.00 (16.00 GMT) from the emblematic Angel of Independence, and advanced through the central Paseo de la Reforma until reaching the Palacio de Bellas Artes, the most important cultural venue in the country.

The convoy advanced to the sound of the noise of the horns and dotted with Mexican flags and banners that read "AMLO, Out", "AMLO VetaYa" and "#AMLOseva".

"We have never had a president as ignorant and corrupt as this, who only looks for his political career," said Dolores Alcántara, 62, retired.

The protest was held a day before the partial reopening of restaurants, hotels, shopping malls and outdoor sports venues in Mexico City, after authorities reduced the level of alertness in epidemiological surveillance for the pandemic.

Mexico, with 127 million inhabitants, registered until this Saturday 212,802 positive cases of coronavirus and 26,381 deaths, according to the official balance.
#Coronavirus
Add Comment