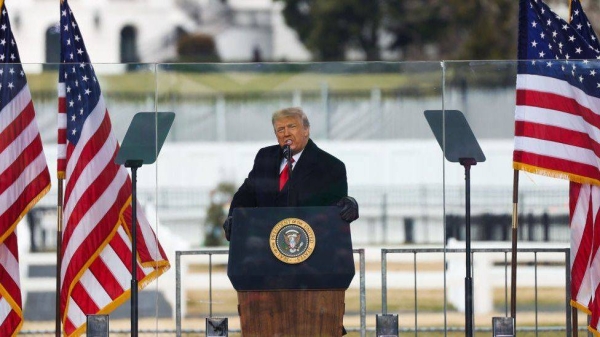 The US Justice Department is examining Donald Trump's actions in connection with efforts to overturn the results of the 2020 election, say US media.
Federal prosecutors have reportedly asked witnesses directly about the behavior of the former US president.

So far, they have chosen not to open a formal criminal investigation into Trump himself.

Rioters stormed the US Capitol on 6 January 2021 in an effort to overturn the president's election defeat.

No former US president has ever been indicted for criminal conduct.

Trump has publicly praised those who attacked the building, but denies any personal wrongdoing.

The Justice Department already has a criminal investigation into what happened on 6 January. The reports that witnesses are being questioned about Trump's role does not mean that federal prosecutors will decide to pursue criminal charges against him.

The investigation is separate to the high-profile, televised Congressional hearings that have taken place over the past few weeks on the same subject - which Trump has characterised as a political witch hunt.

According to a report in the Washington Post, federal prosecutors questioned witnesses before a grand jury about their conversations with Mr Trump and his inner circle in the months leading up to the 6 January riot.

The witnesses were reportedly asked about instructions given by Trump in connection to any attempts to prevent President Joe Biden's election victory from being certified by Congress.

Until now the Justice Department has refused to say whether or not it would weigh charges against Mr Trump for any alleged role in trying to overturn his defeat in the 2020 presidential election.

When the department's top official, Attorney General Merrick Garland, was asked on Tuesday whether he was concerned about indicting a former president - he simply responded that he intends to hold "everyone" accountable.

Federal officials would prosecute anyone "criminally responsible for interfering with the peaceful transfer of power from one administration to another," Garland told NBC News.

The Justice Department's probe into what happened on 6 January 2021, he said, is the "most wide-ranging investigation its history".

Any decision by federal prosecutors to bring charges against a former president - and potential candidate in the 2024 election - would have significant constitutional and political consequences.

In addition to federal prosecutors, a powerful US congressional committee has also been holding its own separate investigation into the armed storming of the Capitol building.

The congressional committee, made up of five Democrats and two Republicans, called dozens of witnesses last week in an attempt to build a case that Trump launched an illegal bid to overturn his defeat by Mr Biden in the 2020 presidential election - culminating in the riot.

Some of the most explosive testimony delivered at the televised hearings came from Cassidy Hutchinson, a former top aide to White House Chief of Staff Mark Meadows.

Appearing as a surprise witness during the sixth hearings, Ms Hutchinson said Trump personally knew that members of the crowd at his morning rally near the White House were armed because they were being turned away by Secret Service officers.

"I don't [expletive] care that they have weapons. They're not here to hurt me," Ms Hutchinson said she heard the president say. "Let my people in. They can march to the Capitol from here."

Her testimony offered the committee something they had been seeking to establish from the very beginning of proceedings - that Trump allegedly knew there was a very real threat of violence and did nothing to stop it.

Its panel of members of Congress has suggested there might be enough evidence to bring criminal charges against Trump, but it does not itself have the power to do that.

Any suggestion that the Justice Department could be looking into the former president's personal role is therefore significant.
#Donald Trump  #Joe Biden
Add Comment