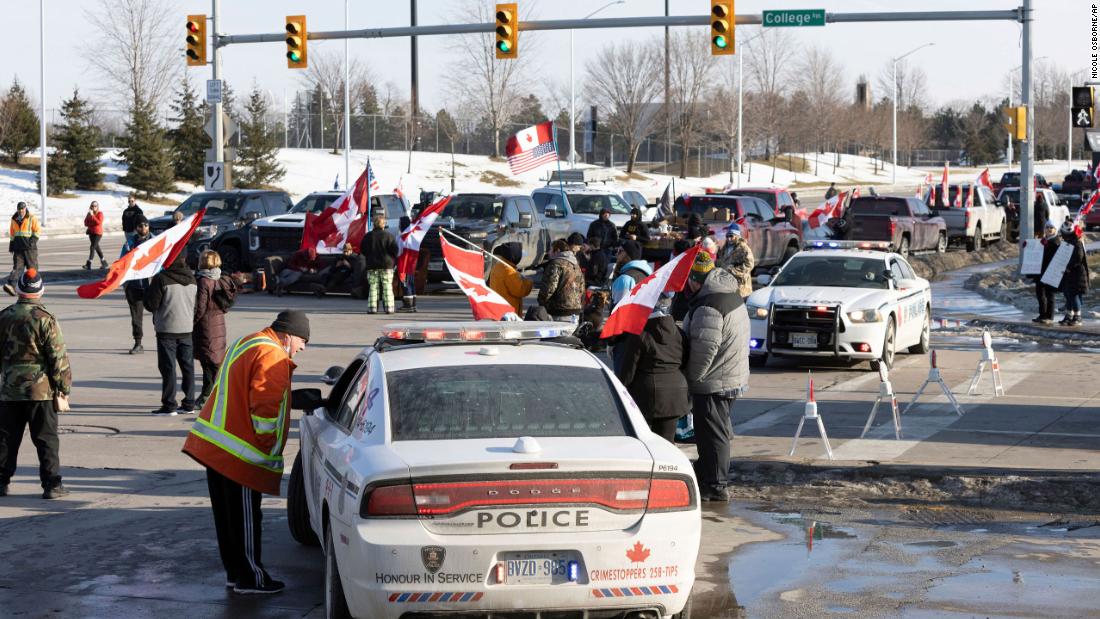 A Canadian mayor asked a court Friday for more authority to remove truckers from the busiest international crossing in North America as weekslong, nationwide Covid-19 protests have disrupted the supply chain and triggered a state of emergency in the country's most populous province.

The Ambassador Bridge stalemate, now in its fifth day, is hurting families, workers and economies on both sides of the border, Prime Minister Justin Trudeau has said, adding in a Friday news conference that "everything is on the table because this unlawful activity has to end."

"If you joined the protests because you're tired of Covid, you now need to understand that you are breaking laws. The consequences are becoming more and more severe," Trudeau said. "You don't want to end up losing your license, end up with a criminal record."

Trudeau added that he spoke with Windsor, Ontario, Mayor Drew Dilkens about the impasse at the access point to Detroit, "to offer the full and continued support of the federal government." The injunction Windsor's mayor is seeking would expand police's authority to respond to the protesters.

Dilkens told CNN's Alisyn Camerota on Friday afternoon that the court was hearing submissions from both sides and that if it decides to grant the city an injunction, police will then ask protesters to leave by court order.

"If they refuse to leave, then ... one by one we'll start towing the cars if required," Dilkens said. "All of us respect that the hallmark of our respective democracies is that we have the right to express ourselves, to protest and to demonstrate, that's okay. What's not okay is deciding to choke off the busiest commercial border crossing between our two nations."

The blockades have slowed the movement of goods and caused production problems at car manufacturing plants along the border. Ford, General Motors and Stellantis have all announced production issues. 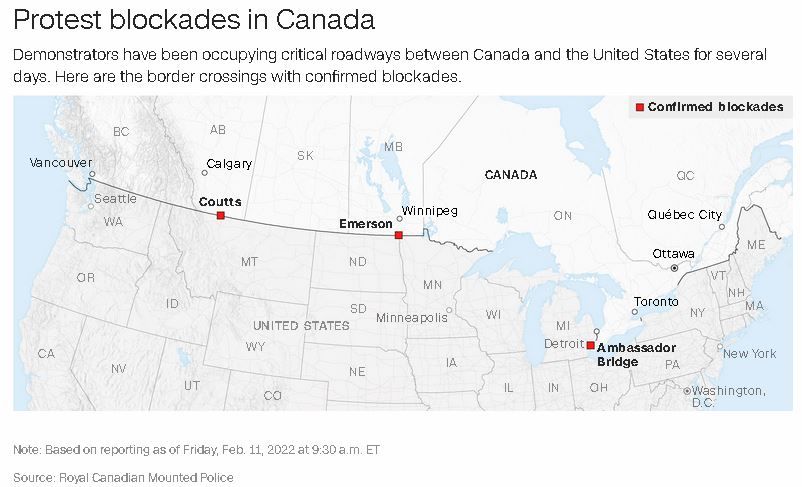 Protesters in recent days have used semi-trailers and sometimes farm equipment to block key Canadian-US access points at Emerson, Manitoba, and Pembina, North Dakota, as well as at the Coutts access point between Alberta and Montana. And for two weeks, they've blockaded the downtown core of Ottawa, Canada's capital -- including at its main airport -- prompting a judge there to rule they must stop honking.

The protests were sparked by truckers who oppose Canada's new rule that requires them to be fully vaccinated when crossing the Canadian-US border or face a two-week quarantine. Their "Freedom Convoy" has since drawn supporters resisting other Covid-19 preventative measures, including mask mandates, lockdowns and restrictions on gatherings.

The prime minister said Friday that many of the protesters who are part of these blockades do not represent the roughly 90% of truckers who the Canadian government says have been vaccinated against Covid-19. And while much of the country may be tired of Covid-19 restrictions, Trudeau said, the pandemic is not over and "we are going to continue to follow the science and do what is necessary to keep Canadians safe."

Ontario's premier on Friday declared a state of emergency and promised "severe" consequences for those who are taking part in blockades.

"I will convene Cabinet to use legal authorities to urgently enact orders that will make crystal​ clear it is illegal and punishable to block and impede the movement of goods, people and services along critical infrastructure," Doug Ford said.

Noncompliance could bring a year in prison and a $100,000 fine, he said. "We will also provide additional authority to consider taking away the personal and commercial licenses of anyone who doesn't comply with these orders," Ford said.

Concerns about similar protests in US

Similar protests soon could erupt in the United States, including around Sunday's Super Bowl in Southern California, American officials warn. Right-wing media outlets have raised the prospect of like-minded rallies in the US and offered positive coverage of those in Canada.

The protests already are "incredibly damaging" to many across the US Midwest, Michigan Gov. Gretchen Whitmer told CNN's "New Day" on Friday.

"It's never been just a Canada issue," she said. "It's been hurting us in Michigan since Day 1."

"We are at an economic crisis because of this illegal blockade," which is becoming a homeland security issue, Whitmer said.

The Canadian government has to do "whatever it takes" to end the stalemate, she said. "We're going to do whatever we can to prevent that from happening in the first place" in Michigan.

Trudeau said Friday he had a direct call with US President Joe Biden, during which they discussed "the American and indeed global influences on the protests ... the presence of US citizens in the blockades and the impact of foreign money to fund this illegal activity."

"President Biden and I both agree that for the security of people and the economy, these blockades cannot continue," Trudeau said.

Possible solutions include persuading protesters to disburse voluntarily; the government giving into demands; and police removing the protesters. Military force is considered highly unlikely as Canada's armed forces are not a police force and they "are not involved in law enforcement in this situation," Defense Minister Anita Anand told CNN.

"Our top priority is to make sure that these illegal blockades end," he said.

How officials are responding

Resolving the standoff is a delicate operation, Dilkens acknowledged. Forcibly removing the truckers could cause even more problems.

"It's very frustrating because people just want us to go in and flush everyone out, and there's a real threat of violence here. We've seen protesters come out with tire irons when the police attempted to tow a car. It could escalate very, very quickly," he said.

"At the same time, going in and moving out 100 or 200 protesters -- well, we could probably do that. What we don't want to see happen is have 300 more show up tomorrow to replace the ones that were moved out. So, police are trying to negotiate."

In Ottawa, there have been 25 arrests since protests began about two weeks ago and more than 1,500 tickets have been issued for traffic, noise and other violations, police said on their website.

A company that could move the trucks also has been threatened, said the city's police chief, Peter Sloly.

"At least one of the major tow trucks (company) that would have been able to supply us with the logistics to tow illegal vehicles and to a significant degree reduce the size of the demonstrations has been threatened themselves," he said. "They have been threatened through some sophisticated online activities and direct threats to harm to their employees and their business."

Authorities might try other options, Sloly added. "We are considering other methods that may allow us to not need to use tow trucks to the extent we initially thought," he said. "All options are on the table."

A criminal investigation into the threats is underway, Sloly said.

The protesting truckers represent a vocal minority among their profession and fellow citizens.

Dylan Friesen, a protester in Ottawa, was let go from a job at a transport company in Ontario for not taking the Covid-19 vaccine, he told CNN.

"That's not right for companies be able to decide that and take away our right to earn money and support our livelihood," Friesen said.

Samuel Gauthier, who supports the demonstrators, is unvaccinated, which has prevented him accessing certain businesses in his home province of Quebec, he told CNN.

"I would call them a leaderless group, and frankly, the requests that these folks have, they are not unified," he said. "There are folks here protesting government, like you'd see at a G-7 or G-20 protest. There are folks that are protesting climate change initiatives, and there are some folks who protesting vaccine mandates."

"I've said consistently, we welcome the freedom of people to protest lawfully and peaceful, but this is not a lawful protest," Alberta Premier Jason Kenney said during a news conference this week.