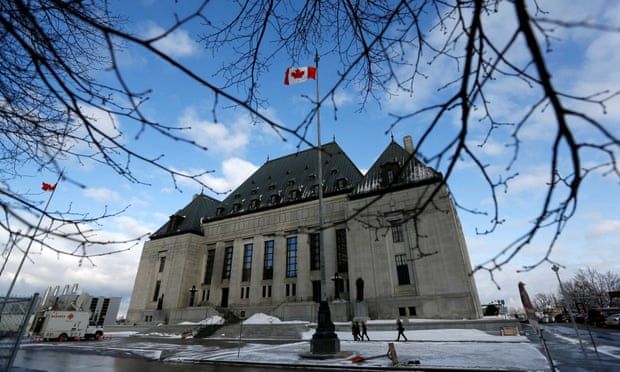 Canada’s supreme court has ruled that life sentences without the chance of parole are both “cruel” and unconstitutional, in a landmark decision that could give more than dozen mass killers who committed “inherently despicable acts” the faint hope of release in the future.

The court unanimously determined on Friday that sentencing killers to lengthy prison terms with little hope of freedom risked bringing the “administration of justice into disrepute”.

The closely watched case centred on the fate of Alexandre Bissonnette, the gunman who killed six worshippers at a mosque in Québec City in 2017, but the court’s decision will possibly have consequences for at least 18 others who are serving multiple life sentences.

In Canada, those serving a life sentence for first-degree murder are eligible to apply for parole at 25 years. But in 2011, the Conservative government gave justices the ability to hand out consecutive sentences, rather than concurrent blocks of 25 years.

In the case of Bissonnette, the 27-year-old pleaded guilty to six counts of first-degree murder and six counts of attempted murder in 2018, after he entered the Islamic Cultural Centre in Québec City with a semi-automatic rifle and pistol, opening fire on worshippers. The prime minister, Justin Trudeau, called the act a “terrorist attack”.

Drawing on the 2011 provision, Crown prosecutors asked a judge to impose a parole ineligibility period of 150 years, the harshest sentence ever handed down in Canada since the abolition of the death penalty. Prosecutors said Bissonnette should serve 25 consecutive years for each of the six people he murdered.

Bissonnette, now 32, will be eligible to apply for parole in his 50s.

The ruling of the court applies retroactively to 2011 and could affect at least 18 others whose parole eligibility exceeds 25 years, even those who have exhausted their appeals. In some cases, people have been handed a 75-year wait period before being able to apply for parole.

Friday’s ruling will also affect Alek Minassian, the man who killed 10 people Toronto in 2018 when he ploughed a rental van on to a crowded sidewalk. The judge overseeing his case has held off sentencing him ahead of the supreme court decision, but will now be obliged to set his chance of parole at 25 years.

Acknowledging the heinous crimes of those serving multiple life sentences, Chief Justice Richard Wagner wrote that the ruling “must not be seen as devaluing the life” of innocent victims.

“This appeal is not about the value of each human life, but rather about the limits on the state’s power to punish offenders, which, in a society founded on the rule of law, must be exercised in a manner consistent with the Constitution.”