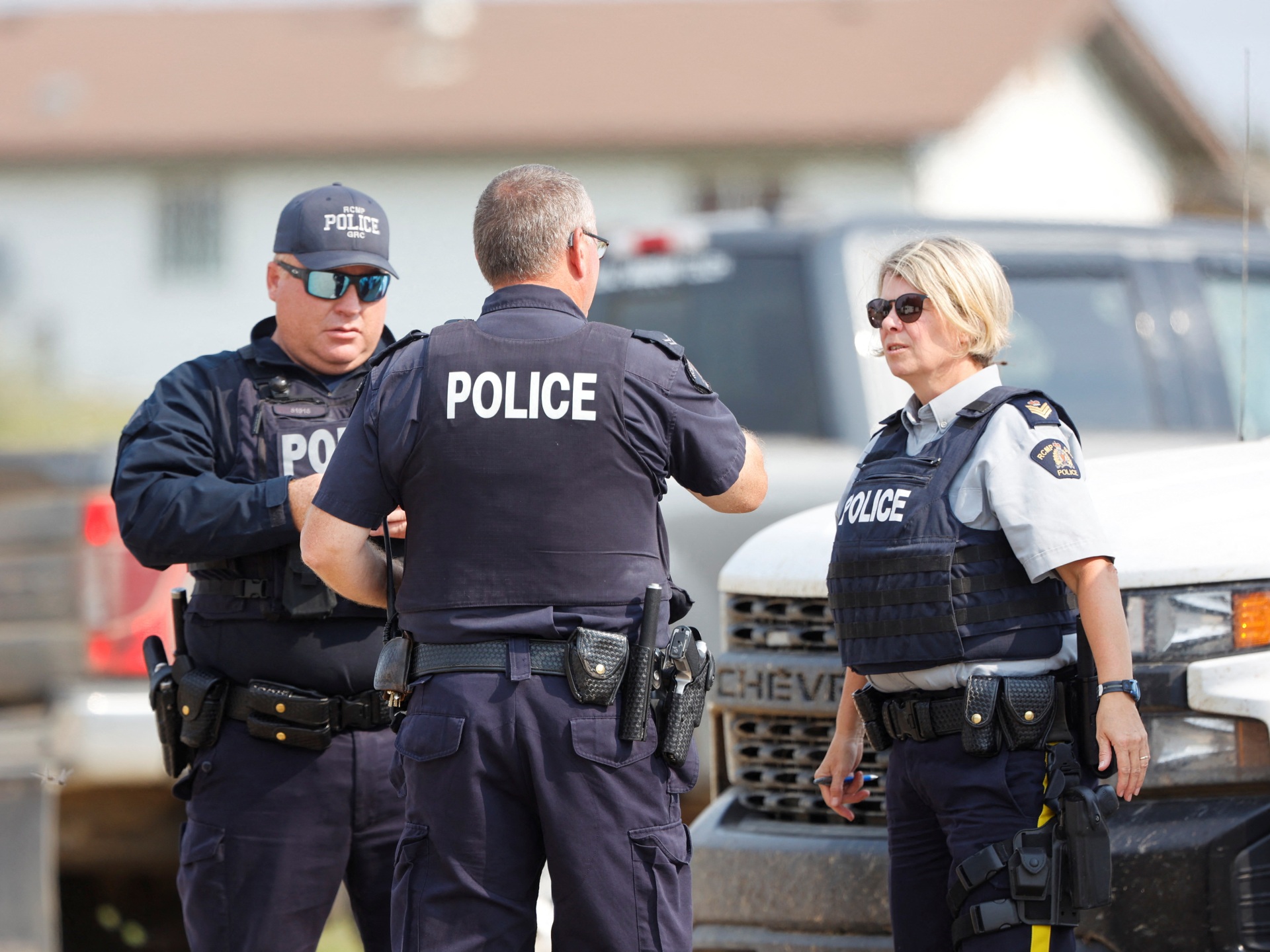 One of two suspects wanted in relation to a deadly stabbing rampage in central Canada has been found dead, police said, while an extensive search continues for the second suspect.

During a news conference on Monday evening, Royal Canadian Mounted Police (RCMP) officials in the province of Saskatchewan said Damien Sanderson, 31, was found dead with wounds that did not appear to be self-inflicted.

Sanderson and his brother, 30-year-old Myles Sanderson, were earlier charged with first-degree murder over Sunday’s attacks, which left 10 people dead and injured 18 others in James Smith Cree Nation and the nearby village of Weldon.

Rhonda Blackmore, commanding officer of the Saskatchewan RCMP, told reporters that police are still looking for Myles Sanderson, who they believe “has sustained some injuries”.

“Myles Sanderson is still at large. We still are advocating for people to be vigilant … he is considered dangerous,” said Blackmore, adding that authorities have yet to establish a motive for the violence.

The fatal stabbing spree in the Indigenous community of James Smith Cree Nation and neighbouring Weldon, approximately 320km (200 miles) north of Saskatchewan’s capital, Regina, marks one of the deadliest incidents of mass violence in Canadian history.

“Yesterday’s attacks in Saskatchewan are shocking and heartbreaking. My thoughts and the thoughts of all Canadians are with those who have lost loved ones, and with those who were injured,” Prime Minister Justin Trudeau told reporters on Monday afternoon.

He said the flag that flies above Canada’s parliament buildings in Ottawa would be flown at half-mast throughout the day and on Tuesday in memory of the victims and in solidarity with all those affected by the violence.

Saskatchewan RCMP announced earlier that warrants had been issued for the two men and some charges had been laid.

Police earlier told reporters that they believed some of the victims were targeted, while others were attacked randomly.

The deadly violence has sent shockwaves across Canada and spurred a nationwide outpouring of grief and support for the communities involved.

James Smith Cree Nation counts approximately 1,900 people who live on the Indigenous reserve, while Weldon is home to about 200 people.

The Federation of Sovereign Indigenous Nations (FSIN), which represents 74 First Nations in Saskatchewan, expressed solidarity with residents after the acts of “unspeakable violence that claimed the lives of innocent people”.

“Our hearts break for all those impacted. This is the destruction we face when harmful illegal drugs invade our communities,” Chief Bobby Cameron said in a statement late on Sunday.

The communities that make up James Smith Cree Nation have declared a state of emergency and said two response centres had been set up to help provide health support to residents.

“My deepest condolences to the many families affected by today’s tragedy in James Smith Cree Nation,” said RoseAnne Archibald, national chief of the Assembly of First Nations.

Meanwhile, residents have started to identify some of the victims.

People in Weldon, a village of approximately 200 people, said one of the victims was Wes Petterson, the Saskatoon Star Phoenix newspaper reported. “I collapsed and hit the ground. I’ve known him since I was just a little girl,” said resident Ruby Works, of the moment she found out the 77-year-old widower had been killed.

“He didn’t do anything. He didn’t deserve this. He was a good, kind-hearted man,” Works told the newspaper.

The Aboriginal Peoples Television Network (APTN) also reported that Lana Head, a mother of two, was among those fatally stabbed in James Smith Cree Nation.

Ivor Burns and Darryl Burns from James Smith Cree Nation also told the Reuters news agency that their sister, Gloria, was among the dead. “We have 10 people dead, including my sister. She was butchered … with her friend and a 14-year-old boy, all three of them,” Ivor Burns said.