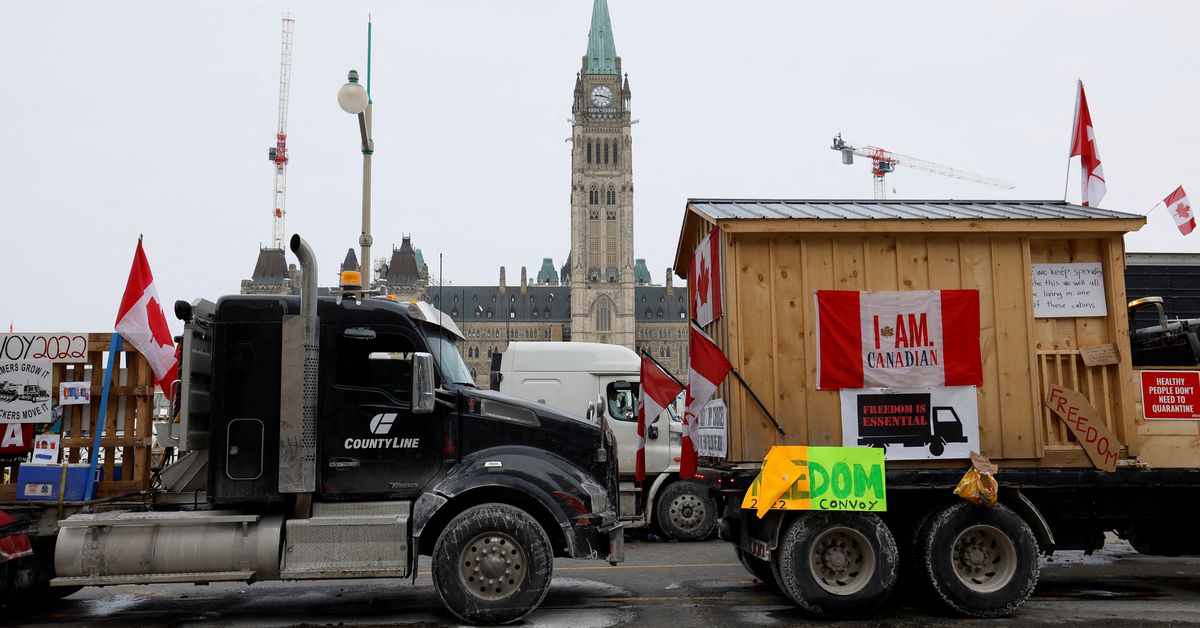 Prime Minister Justin Trudeau on Monday said Canadians were disgusted by the behavior of some people protesting against COVID-19 vaccine mandates in Ottawa and said he would not be intimidated.

Dozens of trucks and other vehicles have jammed up the city center since Friday. Thousands descended upon Parliament Hill to complain about Trudeau, COVID-19 vaccine mandates and masking requirements but by mid-Monday afternoon, many had left.

Police said most demonstrators have been peaceful but local residents complained about blaring truck horns and some demonstrators using the streets as a toilet. Some also harassed a homeless shelter and demanded staff give them food - the shelter said on Twitter - while others flew Nazi flags.

"We are not intimated by those who hurl abuse at small business workers and steal food from the homeless," Trudeau told a news conference.

"We won't cave to those who engage in vandalism ... There is no place in our country for threats, violence, or hatred."

Trudeau said Conservative leader Erin O'Toole should "reflect very carefully on how he's walking a path that supports these people who do not represent truckers."

But the Conservatives say Trudeau is ignoring the pain of thousands fighting for their livelihoods.

"(Canada) is a raw nerve and the prime minister is jumping up and down on it again and again with his inflammatory rhetoric," finance spokesman Pierre Poilievre told the House of Commons.

Trudeau earlier announced he had contracted COVID-19 but felt fine and would work remotely. For security reasons he was moved to an unspecified location on Saturday.

'AS LONG AS IT TAKES'

Ottawa police chief Peter Sloly told reporters the number of protestors had fallen significantly from Sunday and said negotiations with organizers were continuing to ensure the rest left as soon as possible.

"All options are on the table, (from) negotiation through to enforcement ... we are making real progress," he said.

One of the groups involved said it wanted people to go into a mall and shop without masks. The Rideau Centre, a large nearby mall, said it would be shut for a second day on Monday.

The demonstration started as a protest against a vaccine requirement for cross-border drivers, but then developed into a demonstration against Trudeau and COVID-19 policies in general.

Trucking executives say around 90% of drivers have been inoculated. The Conservatives argue the vaccine mandate is causing shortages of food imported from the United States.

Transport Minister Omar Alghabra told reporters that "this mandate has not had a measurable impact on the volume of traffic crossing our borders."

Truck driver Marian Tudor said he could no longer haul goods across the border because he is unvaccinated.

Tudor, 61, said he was willing to stay "as long as it takes, until we get these mandates removed for everybody." He accused the government of using "fake science."