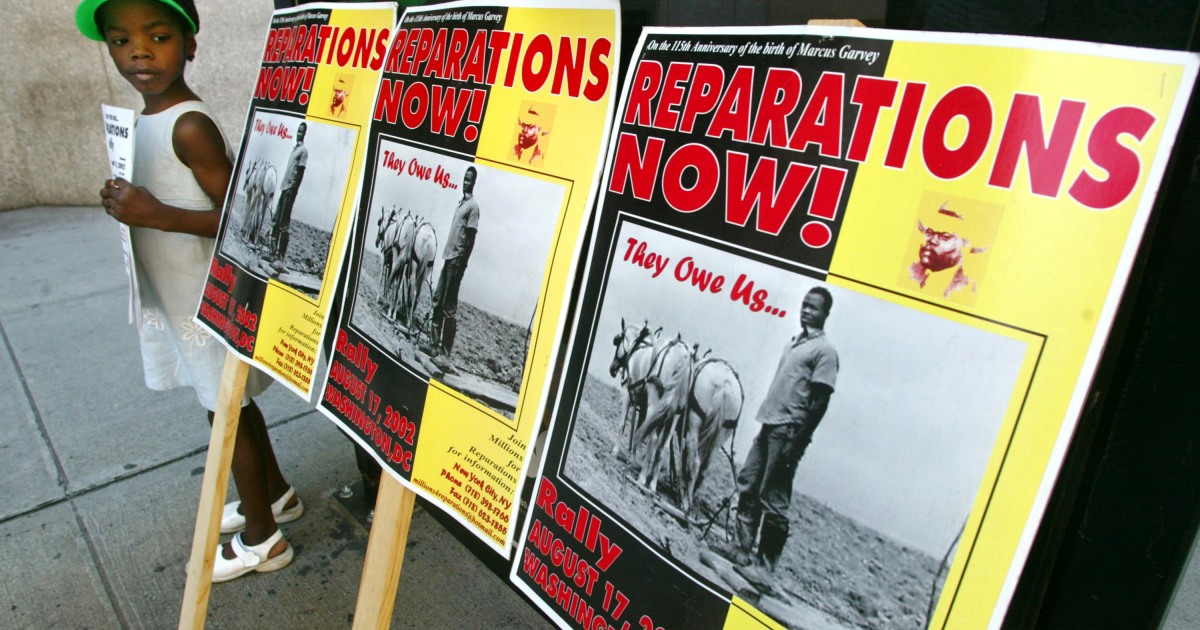 Canada approved reparations – the US can be next

The American case for reparations can draw encouragement and examples from Canada.
The federal government just set aside a huge sum – $40bn – to compensate the victims and relatives of a system of cruel racial exploitation that existed for much of the country’s history. This news is not about the United States, where debate over reparations for slavery have been stalled in Congress for decades. No, this news comes from the US’s neighbour to the north, Canada.

The national government of Canada has agreed to set aside this sum, the equivalent of $31bn, for Indigenous Canadians who were harmed by the country’s child welfare system. The huge sum will go towards compensating Indigenous children who were unnecessarily removed from their families in the last three decades, and fixing the discriminatory system itself. The decision is the latest step in Canada’s efforts to provide redress for historic wrongs against Indigenous Canadians and especially Indigenous children.

For years, Indigenous Canadians were subjected to Canadian “boarding schools.” These institutions, generally operated by the Catholic Church and other religious institutions, forcibly removed First Nations, Inuit and Métis children from their parents and communities and systematically stripped them of their cultural identities while imposing upon them English and French, Christian religious practices, and white Canadian culture.

This programme of state-sanctioned kidnapping and indoctrination officially ran from 1883 until the last school was closed in 1996, despite a long and well-known record of abuse. The stories that have emerged over the decades concerning these schools are horrific. Sexual abuse of children was common, and many of the schools had horrific mortality rates, as children died from tuberculosis and other communicable diseases, malnutrition, violence and even infanticide. The recent revelations of hundreds of newly-discovered unmarked graves on the sites of the now-closed boarding schools has created public outrage across Canada in recent months. These public scandals, combined with a ruling from a 2016 tribunal that surviving victims should be compensated, as well as a pair of pending lawsuits concerning more recent cases of discrimination, finally prompted the Canadian government to act.

In contrast, the debate about reparations continues to ebb and flow in the US without any resolution. Legislation in the House of Representatives to create a national commission to explore the issue, symbolically titled House Resolution 40 (HR 40) after the famous “Forty Acres and a Mule” promise to compensate freed slaves after the American Civil War, has been introduced by Black legislators every year since 1989, to no avail. The racial reckoning that occurred after the deaths of George Floyd and others in 2020 seemed to produce newfound momentum for the reparations conversation. HR 40 moved out of committee for the first time in 2021 but has yet to be put up to a full vote.

Unlike Canada, where the revelation of the graveyards of Indigenous children helped spur moral outrage and governmental action, the evils of American slavery have been extremely well-documented in academic and popular discourse for some time. And attempts like the 1619 Project to highlight the centrality of slavery and its aftermath to American history have led to backlash and laws designed to specifically downplay and obscure the magnitude and horror of American slavery and racial oppression. Such laws portend a renewed opposition to calls for reparations. And so attempts to appeal to moral outrage are likely to be counterproductive in the face of defensive conservatives and state policies designed to whitewash history.

Despite these setbacks in the United States, the American case for reparations can draw encouragement and examples from Canada. The multibillion-dollar sum allocated in Canada comes after years of increasingly large awards and settlements across the country. An earlier settlement reached in 2006 obligated the federal government and the Catholic Church to pay compensation to victims of the residential schools’ system. In recent years, the provinces of Quebec, Nova Scotia, and New Brunswick have agreed to settlements with specific First Nations worth tens or hundreds of millions of dollars each, based on improper allocation of lands based on treaties that are decades or even centuries old. An Ontario court recently ruled that the government had been significantly under-compensating members of various First Nations under the terms of an 1850 treaty, requiring potential billions in back pay.

The first lesson to draw from these Canadian examples is that localised action can have significant effect. This is encouraging for the US where, absent federal legislation, local jurisdictions have taken up the task of reparations. Evanston, Illinois recently became the first US city to implement a policy of reparations for its African American residents. The city has inspired other municipalities to look into similar programmes; main cities such as Detroit and Boston have taken steps towards implementing reparations. Evanston even recently hosted a meeting of the National African American Reparations Commission, which seeks to “create a national network among advocates working on reparations at the local level.” California, the country’s most populous state, created a task force in 2020 that has been investigating the details of how to implement reparations across the state. Even private institutions have begun implementing programmes to benefit descendants of American slaves, including Georgetown University and several other colleges and universities with histories of profiting from slavery.

Furthermore, reparations have been made or considered for more specific cities and statewide programmes that victimised Black people. North Carolina has been paying out millions to victims of forced sterilisation during a statewide eugenics programme that operated until 1976. The city of Chicago has been paying millions of dollars to compensate victims of police torture under now-deceased Police Commander Jon Burge. The city government of Tulsa, Oklahoma has begun deliberations over compensating any survivors as well as descendants of those victimised by the 1921 Tulsa Massacre, which rose into popular consciousness over the 100th anniversary of the ethnic cleansing against the city’s Black residents.

In each of these examples, at least some of the recipients of compensation are living survivors of the policies in question, as is the case for the Canadian programme as well. However, these programmes have also established that families of direct victims are eligible for compensation. Furthermore, while slavery in the United States ended far too long ago for any of its direct victims to still be alive, there is a strong case that slavery represented just one phase in an unbroken chain of anti-Black policies that include Jim Crow segregation, “redlining” policies that discriminated against Black homeowners, and biased policing and criminal justice systems, all of which continue to affect Black people today. Indeed, scholar and prominent reparations advocate Ta-Nehisi Coates has made just such an argument, including in his landmark 2014 essay: The Case for Reparations.

If the Canadian example is to be followed, focusing on these specific and localised cases – redlining in American cities, the Tulsa Massacre, police torture in Chicago, reparations in specific cities or states – can lay the groundwork for larger and more general plans for compensation for the larger system of racial oppression. This type of bottom-up approach to reparations can actually support and complement the top-down approach that has been pursued in Congress through HR 40.

The final lesson coming from Canada is that, until legislation is passed to recognise and compensate past injustices, the court system can be an effective avenue for gaining redress. The United States has seen the judiciary move ahead of the legislature in other areas, from desegregation in the 1950s with Brown vs Board of Education to LGBTQ rights in the recent cases of Obergefell vs Hodges and Bostock vs Clayton County. One such lawsuit for reparations in the US was dismissed in 2004 “without prejudice,” meaning that it can be revived. As local, state and corporate efforts for reparations become more widespread, such changes could add momentum for a renewed legal case for reparations. A legal victory, or simply a strong court case, may in turn spur legislators to finally move on HR 40, seeking legislative redress for the evils of slavery and subsequent racial oppression.

The Canadian process for redressing the wrongs that continue to be inflicted upon Indigenous people has a long way to go. As the head of the First Nations advocacy organisation behind one the recent lawsuits notes candidly, no final agreement has been reached for the $40bn set aside by the Canadian government and “promises actually don’t end the discrimination for kids if they’re not implemented.” The US case for reparations has even further to go, having yet to even revive the “40 Acre” promise of 1865. But the progress made in select US localities, and the recent advancements in Canada, offer new hope and new strategies for finally achieving a measure of racial justice and repairing some of the damage that has accumulated over generations and centuries.
Add Comment