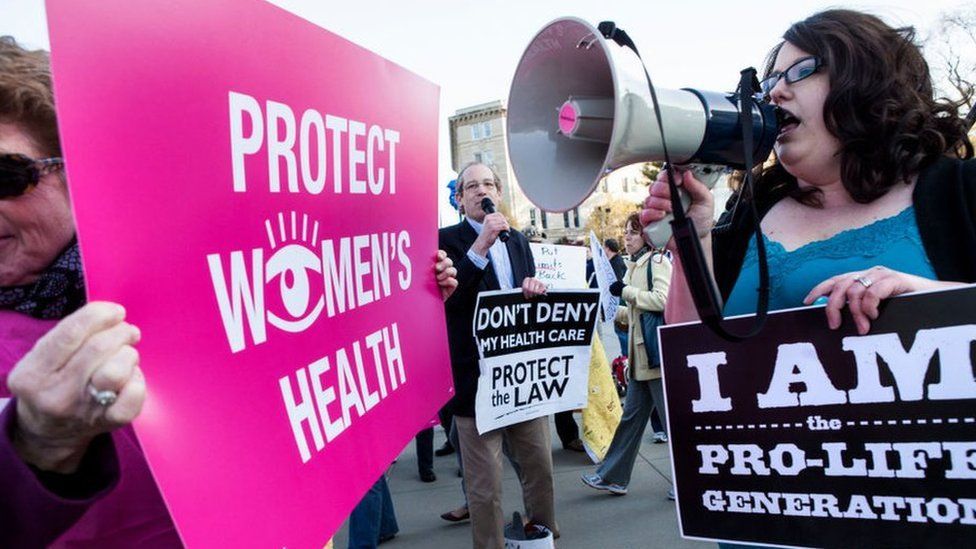 The leak of the draft opinion striking down Roe v Wade's abortion protections crashed on the American political world like a thunderbolt on Monday night.

Politicians and activists on the left and right had been bracing for the possibility of such a sweeping ruling, but the left hoped and the right feared that the court's nine justices might opt for a more limited shift on abortion jurisprudence.

At the very least, most court-watchers expected the final decision to come - as is tradition with most high-profile cases - in the final days of the court's formal session in June. No one imagined that for the first time in modern American history the actual text of a court's draft majority opinion would be leaked in advance.

As the dust starts to settle after the initial shock of the leak, here are some ways the political landscape in the US may have been altered.

The congressional mid-term election cycle is gearing up, with political parties across the US just starting to hold primaries to select their candidates for the Senate, House of Representatives and governorships and state legislative chambers.

Up until now, issues like the economy, immigration and crime have been the top concerns of voters. The prospect that the US Supreme Court will tear down Roe and leave the fight over the legality of abortion in the hands of politicians, however, instantly changes the electoral dynamic.

Candidates for office previously offered their views on abortion on a more theoretical plan. If they were in the Senate, they could talk about what kind of judges they would want on the courts. They could support or oppose policies that affected abortion on the margins of the constitutional rights afforded by Roe. They could speculate on what they might do if Roe were struck down. 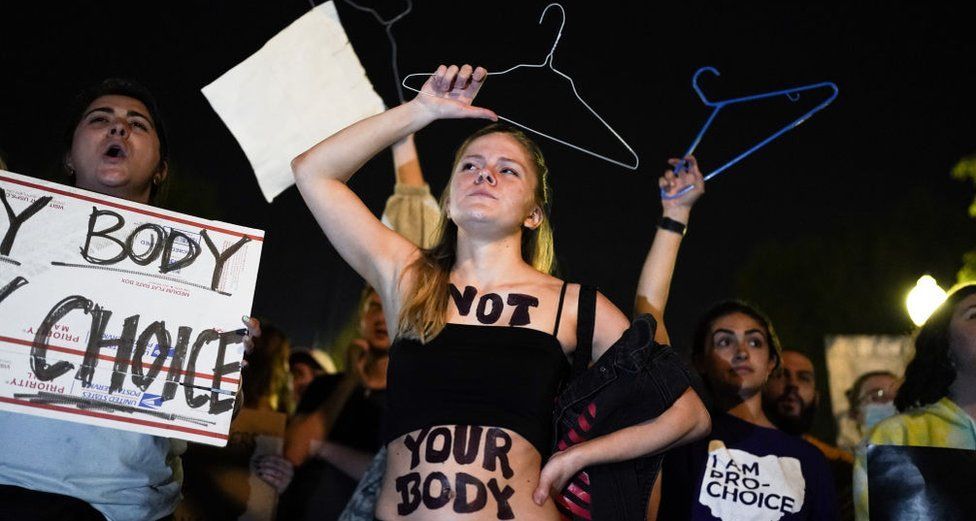 Crowds gathered outside the Supreme Court as news broke about the leaked draft.

In more than half the US states, the political landscape is such that the right to abortion will be all but guaranteed or doomed. But in others - like Pennsylvania and Wisconsin - the fate of the procedure will depend on whether pro-choice Democratic governors win re-election or are defeated.

In other states, control of the legislature often swings between the parties from one year to the next. The side that prevails in November could have a blank slate for determining the fate of abortion for their citizens.

This is now poised to be the "abortion mid-terms" - and the candidates and politicians will have to adjust to this new landscape.

If Roe falls, the US Congress could pass a law that does essentially what the Supreme Court has mandated for the last 50 years - make abortion legal in every US state.

The path to getting there, however, would be a difficult one for pro-choice advocates.

Last year, the House of Representatives, controlled by the Democratic Party, voted to approve legislation that would secure - and, in some cases expand - the right to abortion afforded by the Roe decision. The vote was 218 in favour and 211 against. 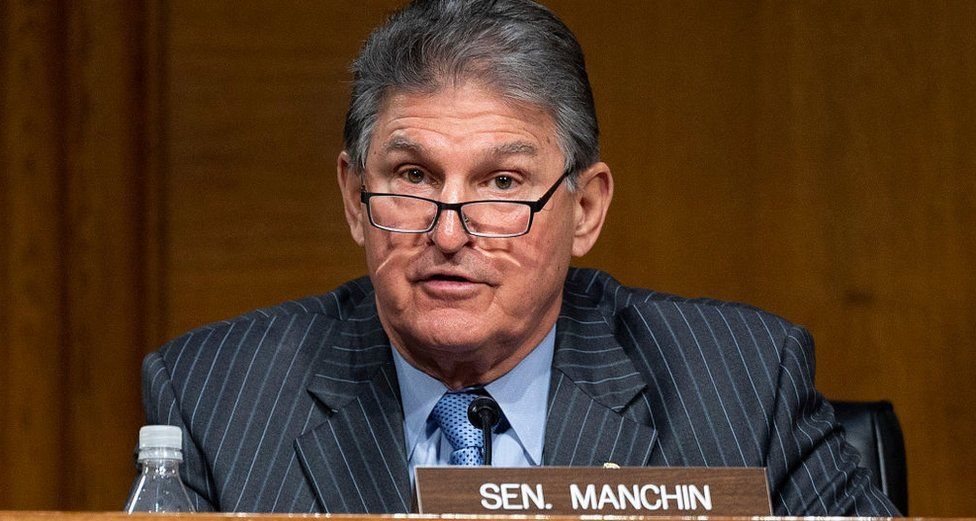 The bill then moved to the evenly-divided Senate, where one Democrat - Joe Manchin of West Virginia - joined the Republicans in voting it down. Because of Senate rules that several Democrats (including Mr Manchin) are adamantly against altering, passage would have required 60 votes out of the 100 senators - a mark the abortion bill did not approach.

With the draft opinion leak, Democrats will renew their efforts to pass legal abortion protections that would stop the dozens of states poised to ban the procedure.

Leaders in the House could scale back the scope of their proposal in an attempt to woo Senate Republicans sympathetic to abortion rights, such as Susan Collins of Maine and Lisa Murkowski of Alaska. They could again try to change Senate rules to allow a simple majority vote to approve legislation - an effort that was unsuccessful during a voting-rights fight last year.

They could also move forward with proposals to add new (presumably liberal) justices to an expanded Supreme Court or try to impeach and remove Donald Trump-appointed Supreme Court justices - like Brett Kavanaugh - who noted the significance of Roe's 50-year precedent and now are at least entertaining the notion of striking the decision down.

The chances of success on such measures range from slim to remote in the extreme - that puts even more pressure on Democrats to win congressional elections in the autumn. And, if Republicans take back at least partial control of Congress instead, the door will firmly shut on Democratic hopes of a national legislative response to Roe's demise.

Are gay marriage and contraception next?

It is difficult to overstate how much the 1973 Roe decision has shaped US history over the last half century.

It led to the rise of the evangelical movement within the Republican Party, as Christian conservatives formed a political identity around abortion - and other social and cultural issues - and worked to influence Republican policies through their activism.

Both parties shifted and became increasingly polarised as a result of Roe. In the first few decades after the decision, it was common to have pro-choice Republicans and anti-abortion Democrats. Over the decades, both parties slowly purged themselves of these outliers, as they became increasingly aligned on cultural and (as a consequence) geographic boundaries.

The maps of where abortion will be banned or greatly limited that are circulating in the media bear a striking resemblance to the red-state, blue-state maps that are familiar to anyone who follows US presidential elections.

The nation, with a few exceptions, has divided into coastal and urban liberal enclaves and heartland and southern conservative strongholds. The abortion debate - and the cultural wars that followed - help explain why.

Few probably predicted the course American politics would take after the Roe decision. And the shape of political landscape - if the draft opinion striking down Roe becomes the law of the land - is equally uncertain. The abortion fight could simply shift from the courts to the state legislatures, keeping US politics much as they are today. The cultural wars driven by the debate could fade, as the nation settles into an uneasy balance of states with abortion guarantees or bans.

Or the battles could become hyper-charged by the prospective ruling and move to other hot-button social issues that, like abortion, rest on Supreme Court precedent.

The decision enshrining a national right to gay marriage is not nearly as old or as established as Roe. And Roe itself rested on a 1965 decision, Griswold v Connecticut, securing the nationwide right to birth control. 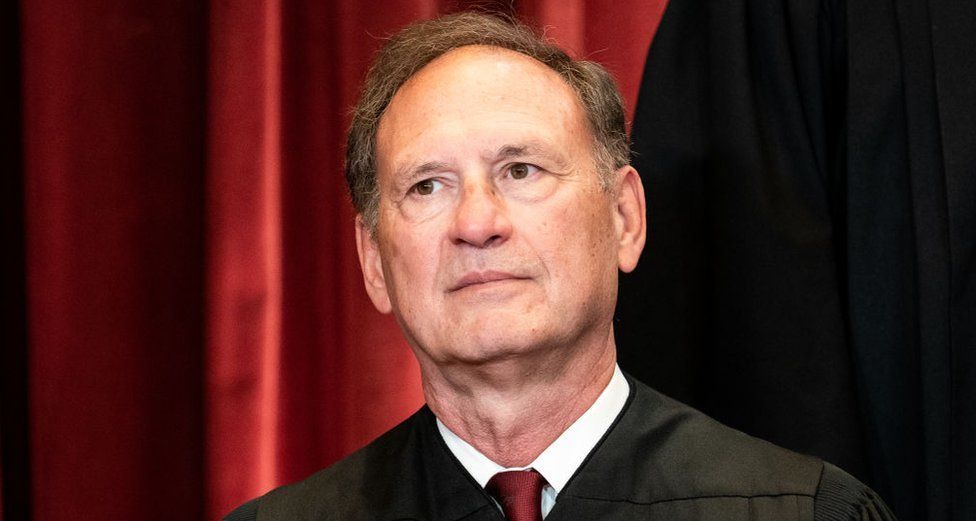 In his draft opinion, Justice Samuel Alito drew a distinction between rights spelled out in the Constitution - such as the Second Amendment right to bear arms - and the kind of "unenumerated rights" that the court in Roe said guaranteed access to abortion (and, although Alito did not mention it, also protect gay marriage and contraception).

The justice opined that the former were much more secure than the latter, which need to be strongly rooted in US history and tradition. It may not be long before opponents of gay marriage, or in vitro fertilisation or certain forms of contraception cite Alito's words to make the argument that there is nothing in the Constitution that prohibits bans on those practices either.

A Supreme Court in crisis

Never in modern US history has a draft Supreme Court opinion been leaked to the public. The court traditionally operates like Mt Olympus, with opinions handed down from high and the inner workings - the judicial horse-trading, debating and cajoling necessary to reach a majority - all taking place in cloistered chambers.

It is a practice that speaks to the court's unrivalled power to interpret, uphold or strike down any law Congress passes and establish or dismantle individual rights at the stroke of a pen. It is a power that was assumed by the court itself in the early 1800s - and one that is inherently undemocratic. The power has survived, and been respected, for as long as it has in part because protections and procedures that the court's champions have meticulously crafted over the centuries.

Only the nine judges and their handful of clerks - law school graduates selected for their achievements and intellect - are privy to the machinations of the Supreme Court's judicial process. Initial views are expressed in a non-binding vote shortly after a case is presented to the court, draft majority and dissenting opinions are circulated and changes are made. There are reports and accounts - from former justices and those familiar with the process - of how draft opinions can sometimes bear little resemblance to the final ruling of the court.

The leak of Justice Alito's draft majority opinion tearing up the Roe precedent root and branch short-circuits that process and could gravely wound the Supreme Court as an institution, sowing distrust among the justices and their clerks and fully exposing the judiciary to the sometimes harsh influence of American politics.

Accusations and conspiracy theories are already flying - that the leaker was a liberal making a last-ditch effort to prevent Roe's repeal, a conservative concerned that the sweeping Alito opinion was in danger of being discarded or watered down or a moderate who wants to make a final opinion paring back abortion protections seem less extreme.

Chief Justice John Roberts, in a statement, called the leak a "betrayal of the confidence of the court" and a "singular and egregious breach" of trust. He ordered an investigation into the origins of the leak - but the damage has been done.

The veil of secrecy that has protected the court, carefully maintained even around the most significant and controversial decisions, has been shredded.