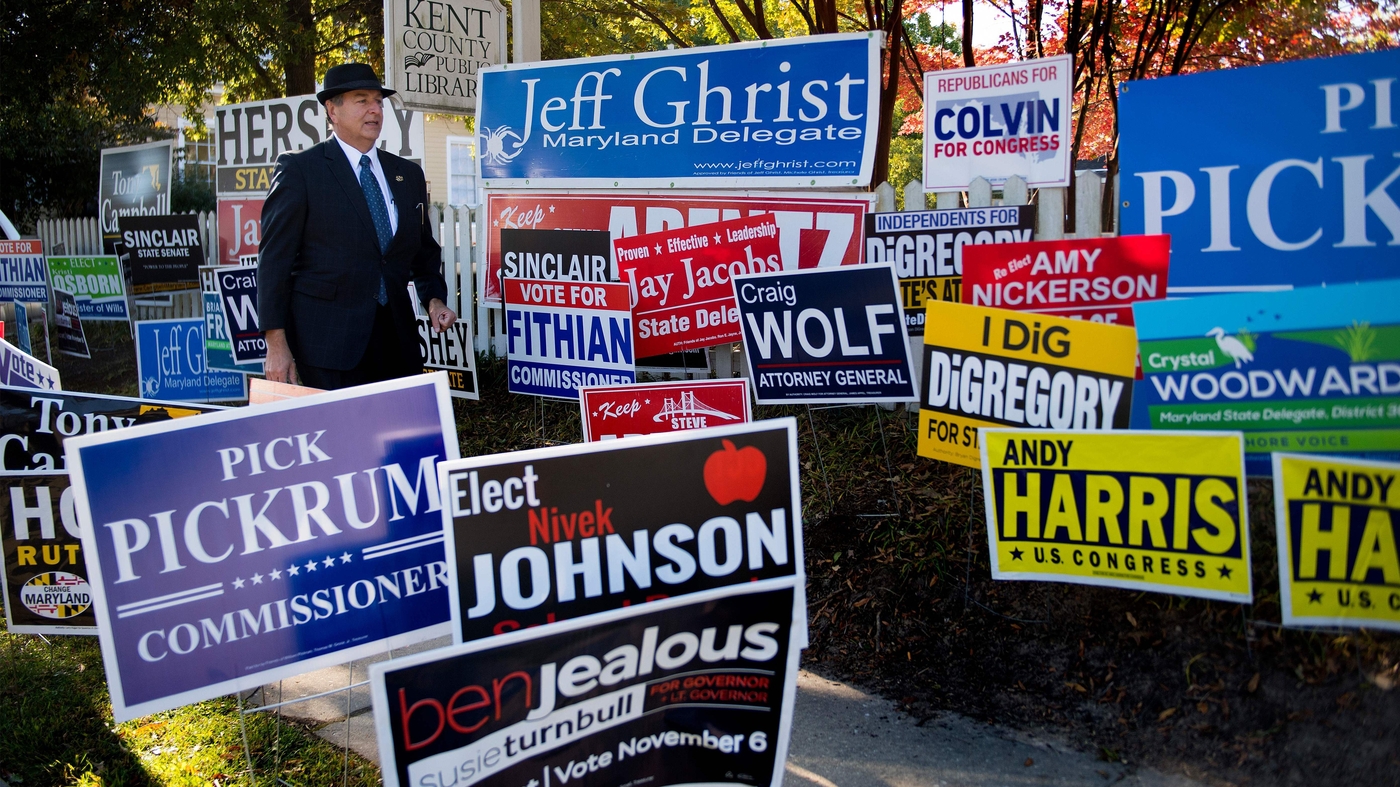 Campaign signs influence how we vote more than you might realize

With election season in full swing, seemingly every neighborhood and busy intersection is sprouting dozens of multicolored signs touting candidates for offices ranging from register of wills to U.S. Senate.

Often, these signs proclaim a candidate's name, but not much else. You might have wondered, how effective can they be as a campaign tool, especially in an age of radio, television and social media? Are they even a smart place to put campaign resources, particularly in local races, where funds are tight?

It turns out political scientists have tried to answer these questions.

A 2015 study led by Donald Green, a political science professor at Columbia University, found that political signs can in fact make a difference — "somewhere between 1 and 2 percentage points on average," Green says. "Hardly earth shattering, but not nothing, either." In races that are especially close, they might just be the deciding factor.

What's primarily at stake when it comes to signs is name recognition — especially for many local races that don't generate a lot of attention, according to Cindy Kam, a professor at Vanderbilt University who leads the Research on Individuals, Politics & Society Lab.

Kam co-authored a study in 2011 in which yard signs for a fictitious county council candidate — "Ben Griffin" — were planted on lawns on a well-trafficked street near a school. A survey was mailed out a few days later by the school's Parent Teacher Association asking respondents to list their choices for the county's at-large council seats. Five real candidates were listed along with the fictitious Ben Griffin and another made-up name.

Incredibly, nearly a quarter of respondents listed the fictional Ben Griffin among their top three picks. 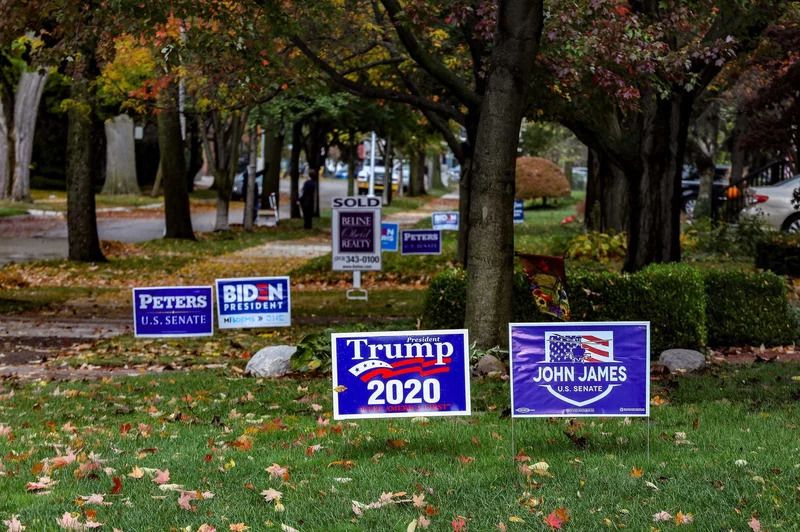 Neighbors display political yard signs in front of their homes in Grosse Pointe, Mich., in October 2020.

Kam concludes that in races where little information is available, "having some sense of name recognition, having seen a name, having seen multiple signs that convey a sense of viability [and] electability can be useful."

But Matt Compton, a senior vice president at Blue State, which helps to support progressive causes and campaigns, says his experience is that political signage can make a significant difference in higher-profile races as well.

Case in point: the 2008 presidential primaries, when both Republicans and Democrats had roughly 10 candidates each vying for their party's nomination.

"[It] was pretty crowded," says Compton, who previously worked in the White House's Office of Digital Strategy under then-President Barack Obama. "So, just finding a way to stand out and to be recognizable in a really crowded marketplace like that is an effective use of campaign time and dollars."

The simpler the message, the better

Keeping things simple seems to be key in increasing name recognition and there's evidence that a cluttered message can do more harm than good.

Brandon Lenoir, who studies political communication and campaigns at High Point University and worked with Green on the 2015 study, says they found that signs without partisan cues actually got the message across better than ones that identified a candidate's party affiliation.

"It seems that just putting your name out there and what you're running for is more effective than actually trying to make a plea for being a progressive or a conservative or a Republican or a Democrat," he says. 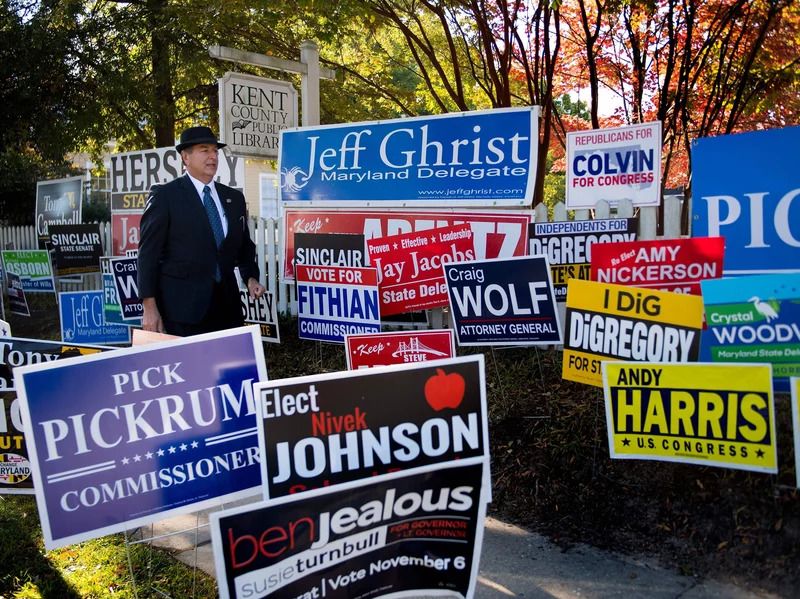 Mark Mumford, clerk of the Circuit Court for Kent County, Md., walks through a mass of political placards as he arrives to check on voter turnout in Maryland's early voting at the Kent County Public Library in Chestertown on Oct. 25, 2018.

More generally, that simplicity is something Christopher Nicholas, a veteran Republican political consultant, says he tries to impress on clients.

"The mistake people make is they want to cram it with too much information. I remind them that people are driving by these signs, not walking by the signs," Nicholas says.

Party affiliation, however, can be transmitted in more subtle ways, says Kenneth Worles Jr., president of Three(i) Creative Communications, which works with Democratic and progressive candidates.

Voters, he says, have begun to internalize the blue and red party colors that have become popular identifiers in recent years. "If a Republican is running in a Democratic city, I guarantee you that Republican is going to have a little more blue" in their sign, he says.

He recalls a campaign he worked on in the 1980s to reelect a Republican congressional candidate in Indiana. Otherwise loyal campaign volunteers complained that in the previous election, the candidate "didn't even have a yard sign," he says.

"People see these signs as part and parcel of what a campaign needs to be doing," Nicholas says. "Without them, things feel a little naked."

How vital, then, are signs to political campaigns? Vanderbilt's Kam thinks they could be more important than ever, given the current media landscape. Local news she argues, "is almost a dying breed" and political coverage has become "massively nationalized."

"I would say in some of these races, we do not have tons of information," she says. If candidates are wanting to get name recognition, "political signs that people see in their day-to-day lives" might be the best way to do it.