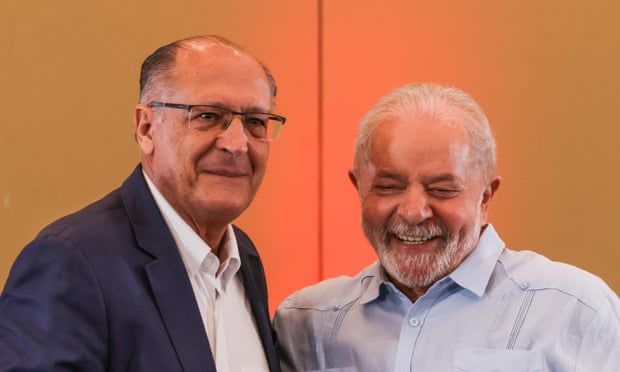 Veteran leftwinger and former president likens coming battle with Jair Bolsonaro to Liverpool v Man City FA Cup match
The former Brazilian president Luiz Inácio Lula da Silva has confirmed he will kickstart his campaign to reclaim the presidency from his right-wing adversary Jair Bolsonaro next month, comparing their rivalry to a clash of the titans between Liverpool and Manchester City.

Lula’s desire to secure a third term as the leader of Latin America’s largest democracy has been an open secret since he recovered his political rights last year when a series of corruption convictions against him were quashed.

But on Tuesday night the veteran leftist finally confirmed he would activate his political comeback on 7 May. He likened the coming battle with Bolsonaro to last weekend’s FA Cup match between Liverpool and Manchester City – in which the red team defeated the blue team 3-2.

After launching his candidacy Lula said he would begin touring the South American country, which appears to be emerging from one of the world’s most severe Covid outbreaks. “Brazil needs fixing,” Lula, a two-term president from 2003 to 2011, tweeted after his announcement.

With just under six months until the 2 October election, polls put Lula ahead of Bolsonaro, a Trump-style populist who critics blame for soaring Amazon deforestation, undermining democracy, and a disastrous response to a coronavirus epidemic that has killed more than 660,000 people.

“Lula’s the favourite, there’s no doubt about it … because in any poll you look at 60% of voters say they reject Bolsonaro,” said Thomas Traumann, a Rio-based political observer.

“This is a government that, objectively, is a failure. It didn’t bring economic growth, it didn’t improve people’s lives, it had 660,000 deaths during the pandemic,” Traumann added.

Yet despite those failures, Bolsonaro has risen in the polls in recent weeks – partly thanks to billions of pounds of welfare payments being doled out to the poor – suggesting the race may be far closer than many progressives had hoped.

“It won’t be easy. This isn’t a war that’s won. It’s a war that we can win,” Lula, 76, who has towered over Brazilian politics since first running for president in 1989, warned during a recent visit to Rio.

Hoping to attract centrist voters, Lula has chosen his one-time presidential rival Geraldo Alckmin, a centre-right former governor of São Paulo, as his vice-presidential running mate. “We’re going to join forces to rebuild our country,” Alckmin said after their once improbable partnership was unveiled.

Traumann called the alliance an important gesture but believed Lula needed to do more to attract voters from outside the left.

That would mean engaging with politicians who helped remove the Workers’ party (PT) from power with the highly controversial 2016 impeachment of Lula’s successor Dilma Rousseff. “The PT won’t beat Bolsonaro on its own,” Traumann said.
#Coronavirus  #Covid
Add Comment