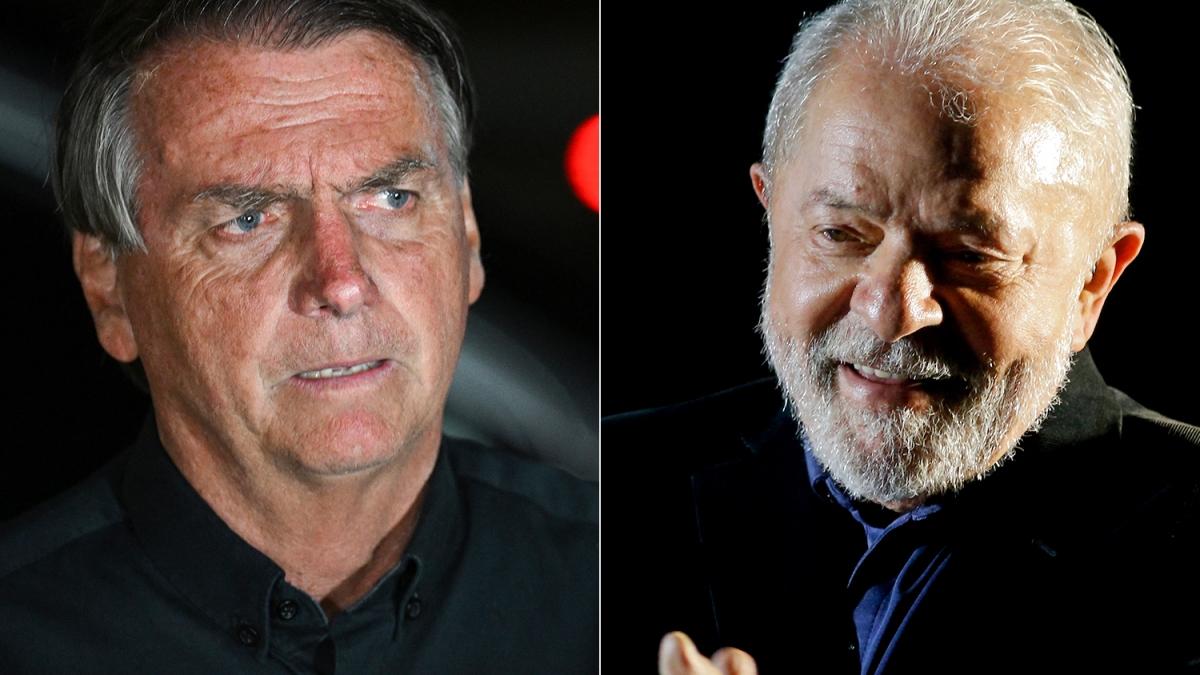 With 99.8 percent of voting machines counted, left-wing challenger Luiz Inacio Lula da Silva had 48.4 percent of valid votes, compared with 43.3 percent for Bolsonaro, according to the Superior Electoral Tribunal.

The second-round vote, extending what has been a tense and violent campaign by an additional four weeks, will take place on October 30.

On Sunday, there were long queues at polling stations that closed at 5pm local time (20:00 GMT).

About 156 million people were eligible to vote.

Da Silva, popularly known as Lula, went into election day the frontrunner, with recent opinion polls giving him a commanding lead and even a first-round victory. The strength of Bolsonaro’s support and the much tighter result dashed expectations of a quick resolution to the deep polarisation in the world’s fourth-largest democracy.

“He clearly outperformed, and that’s a big surprise, ” Eric Farnsworth, vice president of the Council of the Americas told Al Jazeera. “The polls proved to be incorrect in Brazil.” 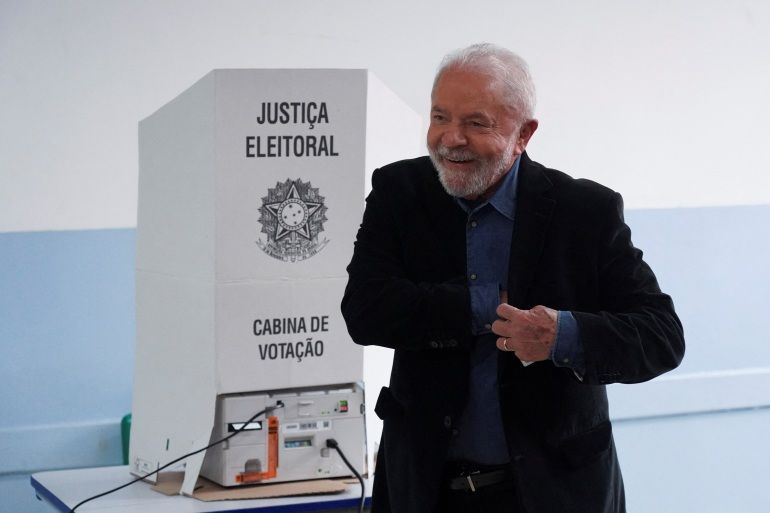 Bolsonaro had questioned polls that showed him losing to Lula in the first round, saying they did not capture the enthusiasm he saw on the campaign trail. The 67-year-old former army captain hailed the result as a win.

“We beat the lie today,” he told reporters, referring to the pre-vote polls.

“Now the campaign is ours… I’m completely confident. We have a lot of positive accomplishments to show.”

In races for the lower house, Senate and governorships, Brazil’s far-right also turned in strong performances.

In the key race for governor of Sao Paulo, Brazil’s most populous state and industrial capital, Bolsonaro’s former infrastructure minister Tarcisio de Freitas shattered forecasts to take 42.6 percent of the vote to 35.5 percent for Lula ally Fernando Haddad, whom he will face in a runoff.

“The extreme right is very strong across Brazil,” said Carlos Melo, a political scientist at the Insper business school in Sao Paulo. “Lula’s second-round victory is now less likely. Bolsonaro will arrive with a lot of strength for re-election.”

In Brasilia, Ricardo Almeida, 45, voted wearing the yellow-and-green colours of Brazil’s flag. “I voted for [Bolsonaro] because of his Christian faith, his defence of family values, and his conservative politics,” he said.

Outside Bolsonaro’s family home in Rio de Janeiro’s Barra da Tijuca neighbourhood, the scene of jubilant celebrations when Bolsonaro was first elected in 2018, the mood was increasingly upbeat.

Maria Lourdes de Noronha, 63, said only fraud could prevent a Bolsonaro victory, adding that “we will not accept it” if he loses. “The polls in our country, the media, and journalists, are liars, rascals, shameless,” she said.

As in several of its Latin American neighbours coping with high inflation and a vast number of people excluded from formal employment, Brazil is considering a shift to the political left.

Presidents Gustavo Petro of Colombia, Gabriel Boric of Chile and Pedro Castillo of Peru are among the left-leaning leaders in the region who have recently assumed power.

Lula, who is seeking a comeback after leading Brazil from 2003 to 2010, said he had been running for president “to get the country back to normal” after four years under Bolsonaro.

Speaking to a crowd of about 2,000 people after the results came in, he struck an upbeat note.

“During this whole campaign, I always thought we would win and we will win,” the 76-year-old said.

“This is just a pause. Things are not good and we need to recover this country on the world stage.”

Decked out in Lula stickers, Adriana Schneider was voting at a primary school in Rio de Janeiro. The university professor, 48, said Bolsonaro’s administration had been “catastrophic” for investment in culture, arts, science and education.

“We’re living under a barbaric government,” she said.

Lula rose from poverty to the presidency and is credited with building an extensive social welfare programme during his 2003-2010 tenure that helped lift tens of millions out of poverty.

But he is also remembered for his administration’s involvement in vast corruption scandals that entangled politicians and business executives.

Lula’s convictions for corruption and money laundering led to 19 months in prison that meant he could not run in the 2018 presidential race that polls indicated he led against Bolsonaro.

The Supreme Court later annulled Lula’s convictions on the grounds that the judge was biased and colluded with prosecutors.

Voting in São Bernardo do Campo on Sunday, Lula acknowledged the dramatic turnaround in his fortunes after a conviction he said was politically motivated.

“It’s an important day for me,” he said. “Four years ago, I couldn’t vote because I was the victim of a lie … I want to try to help my country to return to normal.” 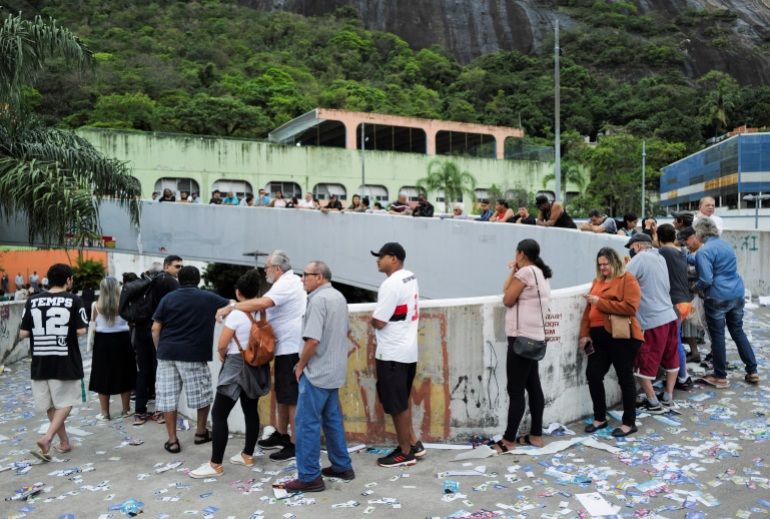 Bolsonaro grew up in a family of modest means before joining the army. He eventually turned to politics after being forced out of the military for openly pushing to raise soldiers’ salaries.

During his seven terms as a fringe legislator in the lower house of the National Congress of Brazil, he regularly expressed nostalgia for the country’s two-decade military dictatorship.

Promising to defend “God, country and family”, the president retains the die-hard backing of his base — Evangelical Christians, security hardliners and the powerful agribusiness sector.

However, the 67-year-old has lost moderate voters with his management of the weak economy, his vitriolic attacks on Congress, the courts and the press, a surge in destruction in the Amazon rainforest, and his failure to contain the devastation of COVID-19, which killed more than 685,000 people in Brazil.