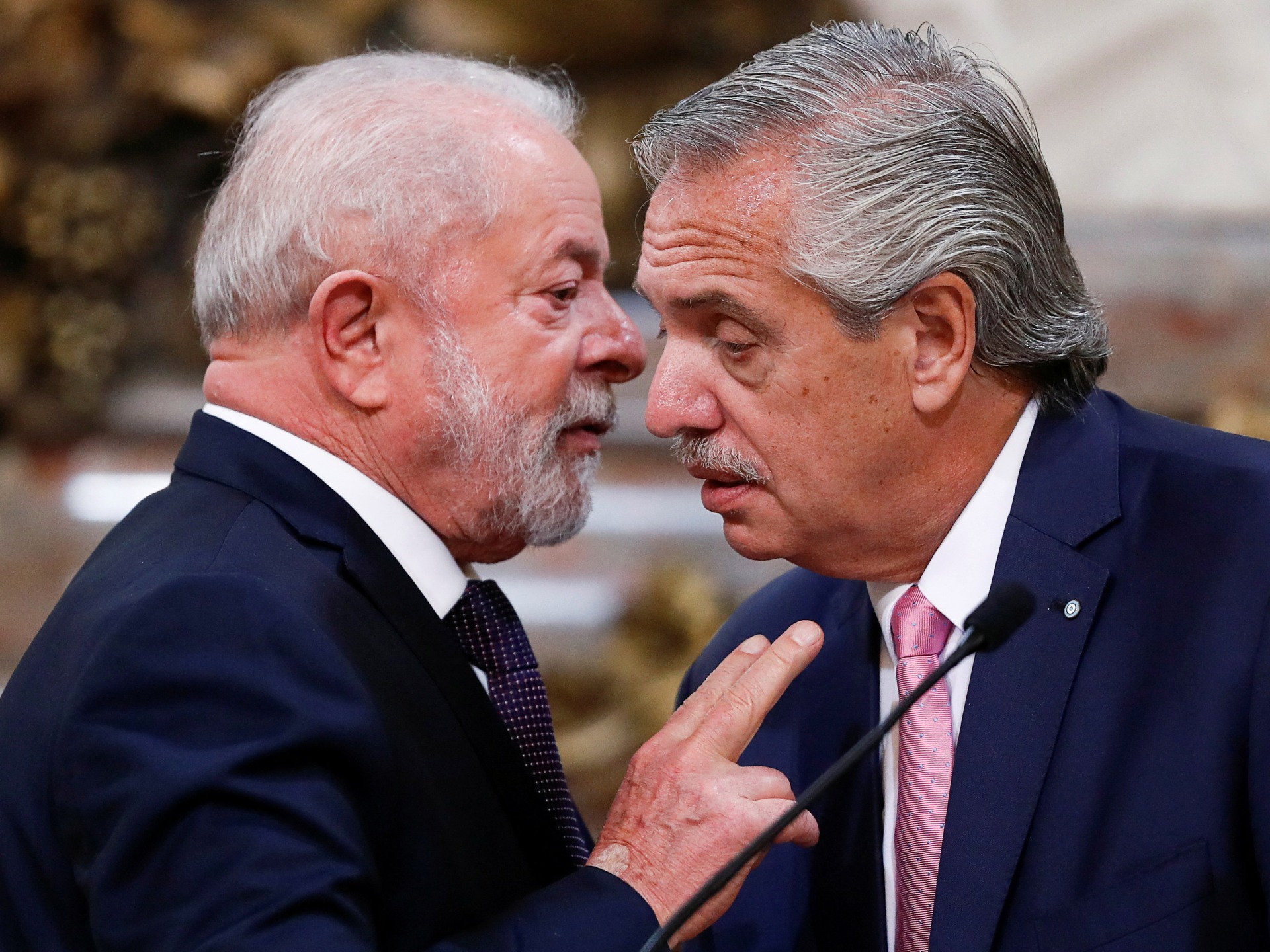 Brazilian President Lula da Silva and Argentinian counterpart Fernandez are looking into a common currency.
Brazil’s President Luiz Inacio Lula da Silva has arrived in Argentina for a summit where the two countries will work to foster stronger trade ties.

Brazilian Finance Minister Fernando Haddad played down the idea of a single shared currency between Argentina and Brazil, saying late on Sunday that the countries were looking at ways to stimulate bilateral trade but not extinguish their own currencies.

Haddad, who had floated the possibility of a common currency in an article last year, said removing trade barriers between the two largest economies in South America could involve using a single currency for commerce, given a lack of United States dollars in Argentina. But that does not spell the end of the Brazilian real, he said.

“Trade is really bad and the problem is precisely the foreign currency, right? So we are trying to find a solution, something in common that could make commerce grow,” Haddad told reporters as he arrived in Buenos Aires.

Haddad said Argentina’s trade with Brazil had suffered due to a lack of dollars in the southern neighbour, where an economic crisis has left the government battling to replenish foreign currency reserves, with an inflation rate of nearly 100 percent last year.

Haddad noted Argentina was an important buyer of Brazilian industrial goods and that “several possibilities” were being floated to circumvent its currency problems, though no decision had been made.

Asked if he could provide further details on the currency issue, Haddad confirmed he would clear the matter up in the coming days, “especially because some people are saying the real will end”.
Brazil is Argentina’s largest trade partner, according to official figures published last week by the INDEC national statistics institute.

Close to 20 percent of Argentina’s imports are from Brazil, worth just over $16bn last year.

“Argentina is the most important country in our diplomatic relations,” Feliciano de Sa Guimaraes, academic director for the Brazilian Center for Diplomatic Relations, told AFP.

Likewise, Fernandez’s government “depends a lot on Brazil”, not least in its negotiations with the International Monetary Fund (IMF), with whom Argentina has a $44bn debt.

Earlier on Sunday, Lula and Fernandez said in an article published on the Argentine website Perfil that they would “advance discussions on a common South American currency that can be used for both financial and commercial flows”.

The Financial Times had previously reported, citing Argentina’s Economy Minister Sergio Massa, that the neighbouring nations would announce this week they were starting preparatory work on a common currency.

Brazil and Argentina will sign a bilateral agreement creating a guarantee fund to stimulate Brazilian exports, a Brazilian government source told the Reuters news agency on Monday, as officials from both governments meet for a summit in Buenos Aires.

Under the deal, Argentina will have to provide a collateral guarantee for Brazil’s trade financing with international liquidity, the source said, adding that the two largest economies in South America will also establish a working group to study creating a single clearing account in the continent, Reuters reported.
Add Comment