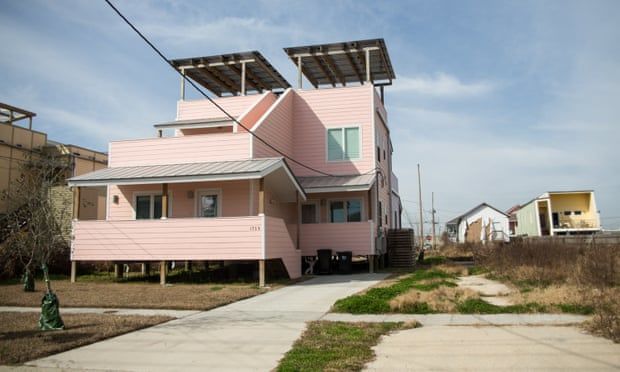 Lawsuit was brought by owners after Pitt’s supposedly sustainable, flood-proof homes were plagued by mold, leaks and rot
It sounded like a dream come true, complete with a handsome prince riding to the rescue: the construction of 109 new, sustainable, flood-proof and affordable homes in New Orleans’s Hurricane Katrina-ravaged Lower Ninth Ward, all thanks to movie star Brad Pitt.

But the homes that were eventually built fell far short of Pitt’s 2006 promises: they were plagued by mold, electrical fires and unclean water.

On Tuesday, 13 years after Hurricane Katrina victims started moving into the homes, a settlement was reached that will pay $20.5m on behalf of Pitt to homeowners whose properties began to deteriorate almost as soon as they bought them

The residents filed the lawsuit against Pitt and his charity, Make it Right, in 2018, after the now defunct charity ignored their complaints and then vanished as the houses continued to decay.

The settlement has led to “tears of joy” among the long-suffering flood victims, Ron Austin, the lead attorney in the class action lawsuit, told the Guardian. “You’re talking about a group of people who didn’t have an option to move and buy or rent a second home. This was their life savings and they were living in something that was deteriorating quickly around them. So they’re relieved and grateful.”

All the money in the settlement will go to the renovation and repair of the homes, Austin said. “There won’t be any windfalls in individuals’ pockets.”

Global Green, an environmental non-profit that was not named in the lawsuit, agreed to pay the $20.5m bill on behalf of the actor, according to Austin. The lawyer said he didn’t know if Pitt directed the non-profit to make the payment, but Pitt is named as one of Global Green’s celebrity advocates on its website. The proposed settlement was filed in the civil district court for the parish of Orleans and is awaiting judicial approval.

Representatives for Brad Pitt, Make It Right and Global Green could not be immediately reached for comment.

Pitt announced the Make It Right project to great fanfare in 2006. The plan was to hire a cast of famous architects to build flashy, environmentally-sustainable homes at the epicenter of Hurricane Katrina’s catastrophic flooding, and sell them to flood victims below cost – starting at $150,000. The Hollywood icon boasted that the houses were “a proof-of-concept for low-income green building nationally, maybe even worldwide”.

But that dream quickly fizzled. The eye-catching architecture was ill-suited to the torrential rainfalls of New Orleans: some of the houses had flat roofs and were missing basic features like rain gutters, overhangs, covered beams, and waterproof paint – causing mold, leaks and rot soon after they were built. While Pitt’s charity initially made repairs, residents say the firm forced them to sign non-disclosure agreements, before cutting off contact and disappearing altogether. That left the residents – many of them low-income first-time homeowners – trapped in their decaying homes yet unable to sell.

Pitt has long denied responsibility for the debacle. A source close to the actor told the Guardian in February that “Brad got involved at the beginning to help the people of the Lower Ninth Ward, and obviously it was upsetting to see what had happened once he had stepped back from the project and others took over”.

Austin said that despite years of anguish, many of the homeowners have never stopped admiring the actor.

“They were not happy that it seemed he was trying to get out of his obligations. Obviously, when someone makes you a promise and you believe in them, and when they try to walk away from that, you’re going to be disappointed,” he said. “But they were never not fans of Brad Pitt. He’s an icon of a guy.”
Add Comment