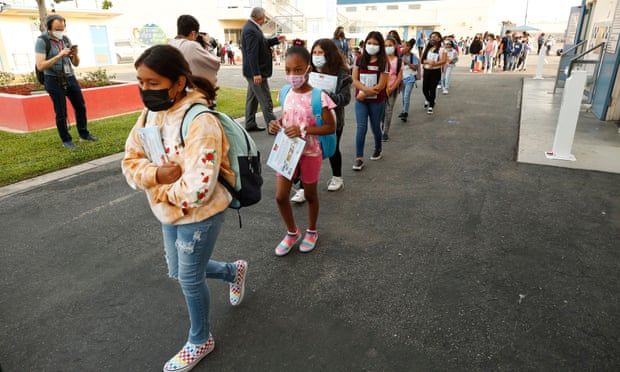 Los Angeles Unified, America’s second largest school district, is facing a civil rights lawsuit from a Black parent who says her daughter’s school taught students about slavery by having them pick cotton.

Rashunda Pitts sued the school district and staff members at Laurel Span school in response to the incident that, according to the lawsuit, humiliated her daughter and left the now 14-year-old with extreme emotional distress and anxiety.

The incident occurred in October 2017, according to the lawsuit, when Pitts spotted a cotton field at her daughter’s Hollywood school. She contacted school officials who informed her that her daughter’s class was reading the autobiography of Frederick Douglass and that the field had been planted to give the students “‘real life experience’ of what it was like to be a slave by ‘picking cotton’”, the lawsuit says.

After Pitts shared her concerns that the project was “culturally insensitive”, school officials agreed, according to the suit. School leaders said they would remove the field but that they couldn’t do so within 24 hours as Pitts had requested, and that they would aim to by the end of the week or the following.

But the school misrepresented that conversation in a statement to the press that contradicted what officials told Pitts, the lawsuit alleges, and sought to “cover up the discriminatory conduct”.

“We regret that an instructional activity in the garden at Laurel School was construed as culturally insensitive,” the school said, adding that “tending to the garden” with fruits and vegetables had been a longtime tradition and was not used for historical reenactments. “When school administrators became aware of a parent’s concern about the cotton plant, they responded immediately by removing the plant.”

Pitts’ daughter, who she says had become “quiet and reserved” in the weeks leading up to the incident, said she was afraid to tell her mother about the project because she feared her teachers would become upset and possibly “retaliate”, according to the suit.

Her teacher did not require her to pick cotton, she told her mother, but she watched other students do so and “discussion of the project in school terrified her and she [was] horrified at the idea of having to ‘pick cotton’”. The school failed to ask parents for permission for the project, the suit says, or inform them.

Pitts alleges the project, and the school’s response, amount to discrimination against her daughter on the basis of her race and sex. “She has uncontrollable anxiety attacks and has [experienced] bouts of depression when she thinks about the Cotton Picking Project,” the lawsuit states.

Similar projects around teaching slavery in schools have attracted widespread outrage. In New York earlier this year, officials announced they were investigating a white teacher who, during lessons on slavery, allegedly told his class of mostly Black seventh graders to pick seeds out of cotton and put on handcuffs.

In Indiana, Black parents said their daughter’s teacher instructed students to draw a black person picking cotton during Black History Month as part of an assignment on life in the 1800s.

Insensitive assignments about slavery can traumatize students, according to a report from USA Today, and show how the US has fallen short in adequately and appropriately teaching the complex topic.

“Unfortunately, (slavery is) addressed often in ways that are either marginalizing or it’s the only way that Black people … are brought into the curriculum,” said Keffrelyn Brown, a professor of cultural studies in education at the University of Texas-Austin.

“We can never re-create, nor should we want to re-create, enslavement,” Brown said. “It minimizes the trauma of the history itself.”

A Los Angeles Unified school district spokesperson said the district typically does not comment on pending or ongoing litigation.

R B 169 days ago
SNOWFLAKE - seriously, just ridiculous! Find a real reason for a lawsuit cause that isn't it.
View all comments (1)Add comment