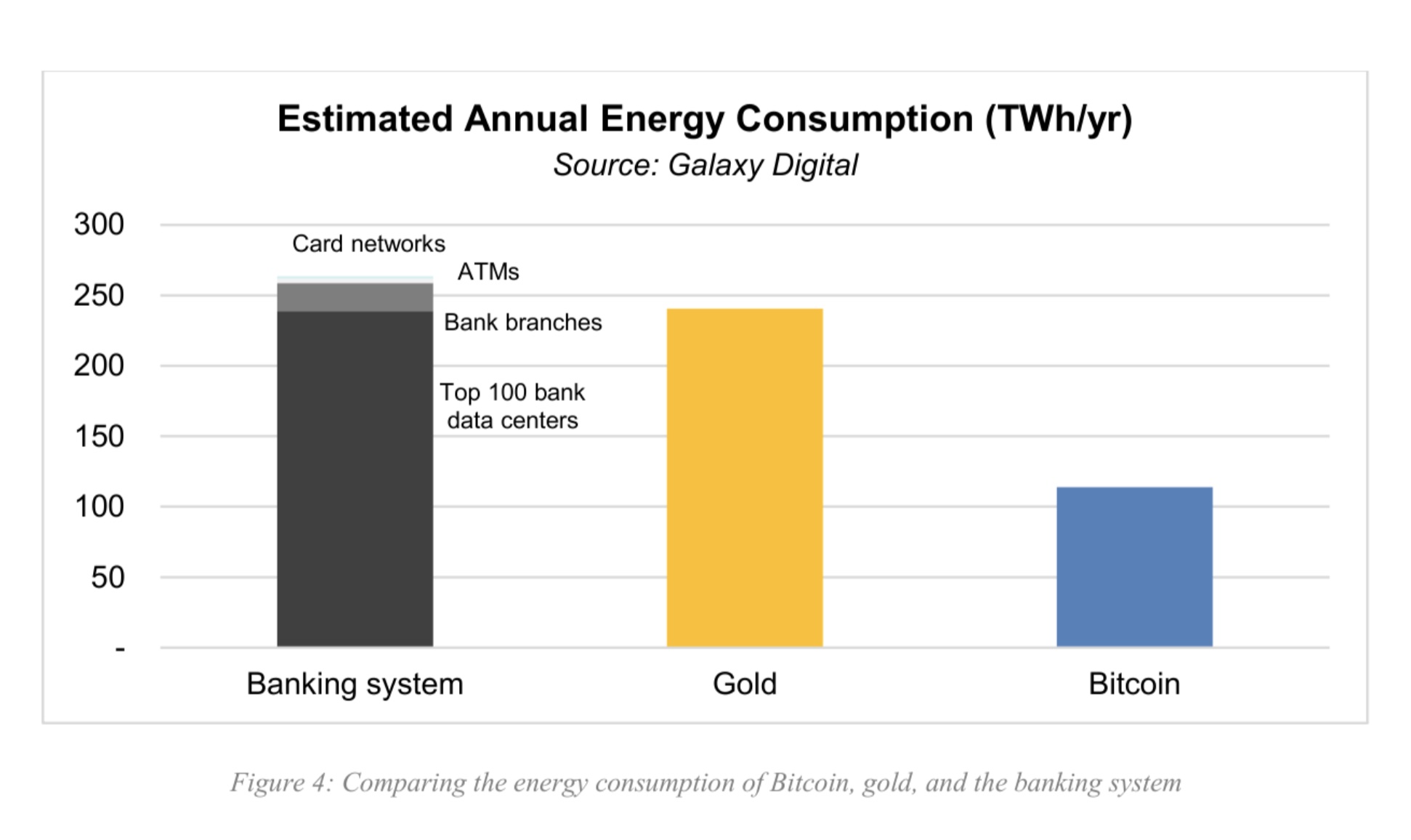 A recently released research report from Galaxy Digital has calculated the energy consumed by the Bitcoin network and then compared it to other industries, including the banking industry. It found that Bitcoin consumes 113.89 terawatt hours (TWh) per year, while the banking industry consumes 263.72 TWh per year.

“Bitcoin is a fundamentally novel technology that is not a precise substitute for any one legacy system,” according to the report. “Bitcoin is not solely a settlement layer, not solely a store of value, and not solely a medium of exchange. There is no denying that the Bitcoin network consumes a substantial amount of energy, but this energy consumption is what makes it so robust and secure.”

Galaxy Digital compared the Bitcoin network’s energy consumption with that of the banking system as well as the gold industry, since the largest cryptocurrency is often compared with the two. The report found that banking and gold consume around 263.72 TWh per year and 240.61 TWh per year, respectively, while Bitcoin consumes much less energy — 113.89 TWh per year.

After comparing different sectors’ energy consumption with that of Bitcoin, the report jumped into showing how vital energy is for the Bitcoin network and ways it can help the world reduce its pollution of the atmosphere.

“Critics often assume that the energy expended by miners is either stolen from more productive use cases, or results in increased energy consumption,” it reads. “But because of inefficiencies in the energy market, bitcoin miners are incentivized to utilize nonrival energy that may otherwise be wasted or underutilized, as this electricity tends to be the cheapest.”

Galaxy Digital also showed that a significant part of the world’s energy production is wasted — about 2,205 TWh per year which is 19.4 times that of the Bitcoin network.

“Though the revenue associated with mining varies, miners have the luxury of flexibility, with the option to switch their equipment on or off at any time,” according to the report. “This makes Bitcoin mining the ideal energy sink: anyone, anywhere, can monetize excess energy by plugging in equipment and switching it off at their convenience. One example of where Bitcoin mining acts as an energy sink is in oil fields, resulting in a direct reduction in methane emissions.”

According to the report, oil fields currently generate about 40 percent of the world’s energy. However, they also frequently produce methane as a byproduct, whose greenhouse effects are 25 times as environmentally damaging as those of an equivalent quantity of carbon dioxide.

“Bitcoin mining offers a solution,” the report suggested. “Companies like Great American Mining, Upstream Data, and Crusoe Energy Systems are building infrastructure to capture this methane at the wellhead and use the otherwise-wasted gas to mine bitcoin. This means that oil producers can ensure a 24x reduction in emissions compared to venting that methane into the atmosphere.”

Source: Bitcoin Consumes Less Than 50% the Energy of the Banking or Gold Industries, Research Reveals – Fintechs.fi

Sid 35 days ago
Yup sure, you bet, got it. Wink wink
View all comments (1)Add comment