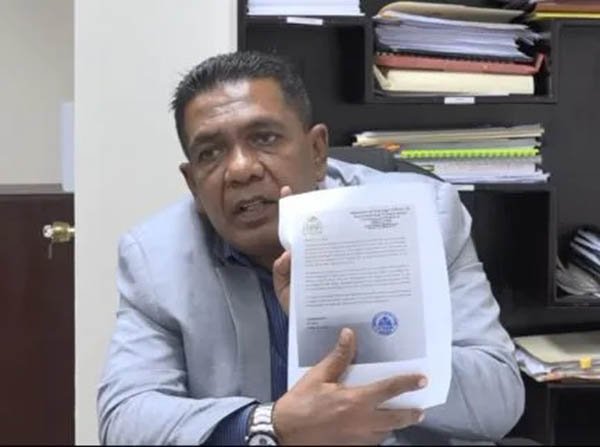 As over $1 billion owed by the Panamanian government to the Guyana Rice Development Board (GRDB) for rice sold to the country remains in limbo, a proposal

As over $1 billion owed by the Panamanian government to the Guyana Rice Development Board (GRDB) for rice sold to the country remains in limbo, a proposal is being put forward for consideration by the GRDB to offer a commission to millers.

The proposal is in its preliminary stages and no decision has been taken on the way forward, Rajendra Persaud of Nand Persaud Company on Friday related to this newspaper. His company is owed close to half a million US dollars from the deal.

During a meeting last week with the Guyana Rice Millers and Exporters Association, President Irfaan Ali informed millers that it has been difficult to get a commitment from the Panamanian government to honour their payment obligations. The President, according to Persaud, explained that the Panamanian government is currently investigating the deal and corruption in the country and as such, there is no clear indication when the country will be ready to honour its debts.

Persaud said it is now up to the GRDB, since it is that agency that facilitated the deal, to resolve the matter of payment.

Vice President of the Guyana Rice Producers Association, Lekha Rambrich, in a recent interview with this newspaper related that the delayed payments have hindered the operations of several small rice millers. He noted that all of the millers were impacted by the nonpayment but small millers were the ones who faced the brunt of the deal.

“All we keep getting is promises, promises, but nothing has been happening and millers continue to lose… this money being hold up has cause a lot of setback for not only millers but farmers also because they do not have enough money to invest,” Rambrich said pointing out that there is a trickle-down effect.

He noted that a few mills have gone into “inactive” status due to not being able to convert paddy into rice.

Rambrich added that if the GRDB had honoured the regulations outlined in the Act, this situation could have been avoided. He explained that the Act stipulates that a contractor must be paid within 42 days of the sale of rice, however the GRDB contract with Panama allows for payment within a year of the sale.

Medium-scale miller, Rahaman Bradshaw of R. Bradshaw and Sons Rice Mill from Leguan, related to Stabroek News that because of the non-payments, his company was forced to take out a loan to ensure operations stay afloat.

Speaking with this newspaper via phone he explained that some $56 million is owed to him from the deal.

“We had to take out loans but we are not the only ones affected, the farmers are more affected because they couldn’t plant and we couldn’t pay them enough,” the miller related.

He noted that while his operation continues, the past five years have been challenging and they were forced to seek new markets to export their produce.

“We honestly don’t know where this is going and if we will ever get paid but we have to remain hopeful because we always need money,” he stated.

Both ministers of Agriculture, Zulfikar Mustapha, and Foreign Affairs, Hugh Todd, were to seek an audience with the Panamanian government to sort out the issue.

In August last year, Mustapha told Stabroek News that he had spoken with the Panamanian Ministry of Agriculture, which acknowledged in writing that there is an outstanding amount and made commitments to pay it.

“It is a year ago since I gave my commitment and started to push for this payment. I have their word on paper that they will pay but we haven’t received any payments as yet,” the Agriculture Minister stressed.

Mustapha noted that if the APNU+AFC government had followed through and pressed for payments, rice millers could have been paid already.

Investigations have revealed a delay in payments of $1,184,198,400 owed by the Panamanian government.

During his first press conference that was held virtually, Mustapha highlighted that millers in turn, owed $353,925,513 in commission payments to the GRDB. These payments, he explained, could not be met until the millers received payment for the rice supplied.

In 2018, the governments of Guyana and Panama renewed their agreement for the supply of rice to the lucrative Panamanian market for 2019.

The value of that contract was US$5.2 million and saw the supply of 200,000 quintals (equivalent to 9,075 tonnes) of white rice being shipped.

In September 2018, 33 containers of parboiled rice instead of white rice was sent to Panama. The shipment was flagged by the Panamanian authorities and returned to Guyana.

The signing of the 2014 contracts to supply rice to Panama in a Government-to-Government arrangement ensured that Guyana’s rice market continued to expand, with production having risen significantly.

The Government of Guyana, through the Ministry of Agriculture and the GRDB, and in collaboration with the Rice Producers Association, had been working to expand the market for Guyana’s rice and paddy to overseas markets, the statement said.

Interested 264 days ago
5000 tonnes per month equals 1kg per Panamaian per month, every month. At the current commodity price of rice 14 USD per cwt, that's 714 payments missed. Why did the Guyana not stop sending rice after the initial late payment?
That smells of corruption and fraud.

Oh ya 265 days ago
Well good luck getting your money. Panama has to borrow money for everything they do. The other day a story about borrowing a few million to buy something. And they owe you a billion JAJAJA
View all comments (2)Add comment