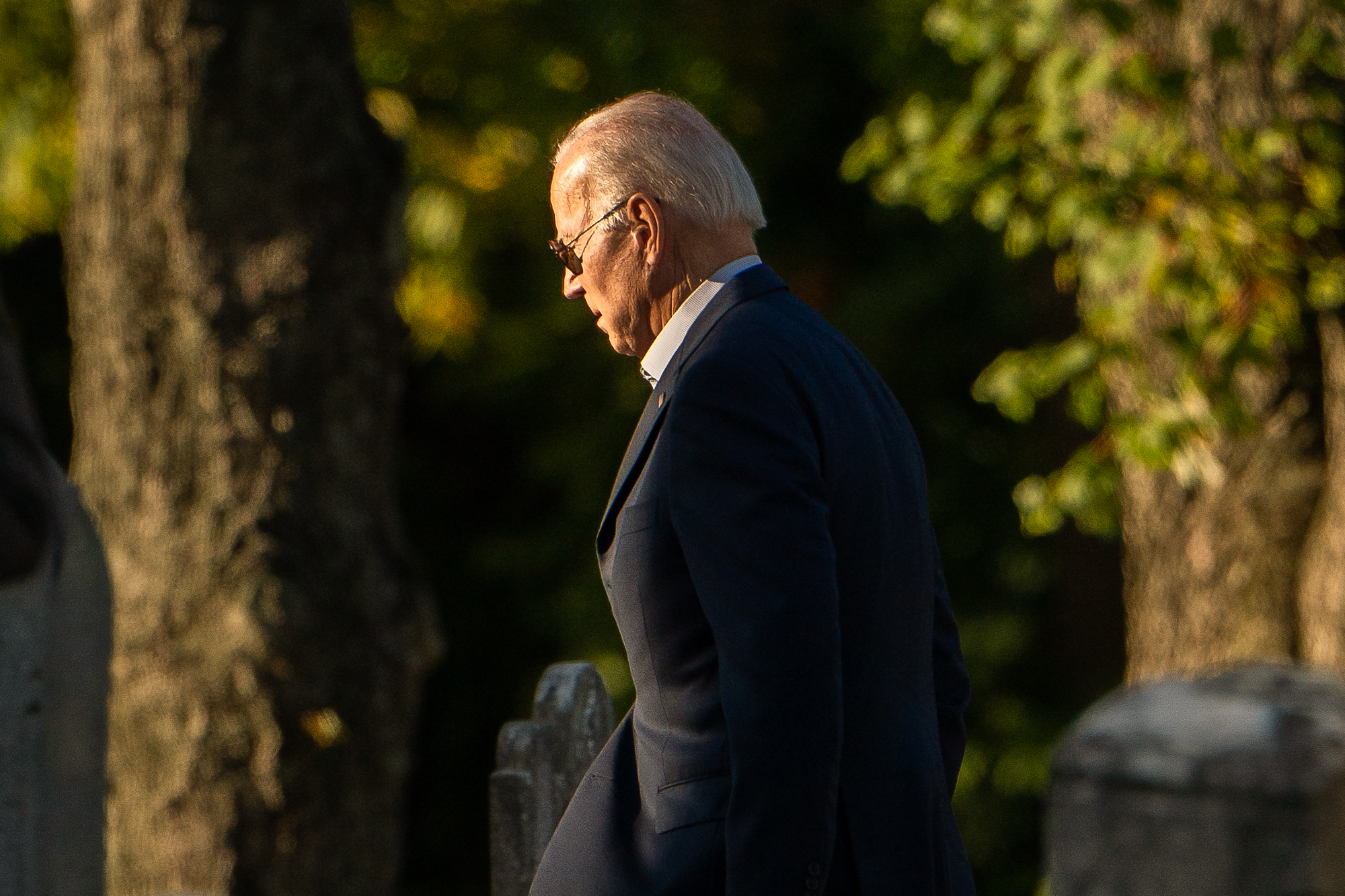 Biden’s about to turn 80. Don’t expect a blowout birthday bash.

The milestone is being met with some trepidation inside the West Wing.

It will be a birthday like no other in White House history. But those inside 1600 Pennsylvania Ave. are not keen on having a blow-out celebration.

President Joe Biden will turn 80 years old next month, becoming the first commander-in-chief to become an octogenarian while in office. The Nov. 20 birthday will come two weeks after the midterms and will likely intensify scrutiny of Biden’s health and speculation as to whether he will seek another term.

If he were to win again, Biden — who already holds the distinction of being the oldest president elected — would be 82 when he takes the oath of office a second time and 86 on his successor’s Inauguration Day. His age has always been a sensitive topic among his closest allies and planning is underway as to how to best navigate the occasion.

White House aides are keenly aware of the storylines surrounding his age and are bracing for the inevitable news cycle. The topic has been met with some trepidation in the West Wing and senior aides have called around to Biden world allies to seek advice on how to best handle the date that will surely draw significant attention from reporters and Republicans alike.


For now, the plan is likely to downplay the birthday and simply focus on the work, according to those familiar with the discussions.

“Like President Biden has said, anyone with questions about his age should just watch him: he has delivered record job creation, made NATO the strongest it has ever been, and amassed the most significant legislative record since LBJ in less than half of one term,” said Andrew Bates, White House spokesman. “I don’t have a comment about whether POLITICO is invited to his birthday.”

Biden is not the first president for which age has become a matter of politics. Famously, one of his predecessors, Dwight Eisenhower, declared that “no one should ever sit in this office over 70 years old, and that I know.”

Eisenhower left office in 1961 not long after he hit that age. But while attitudes toward aging have changed in the decades since, White House aides know Biden’s birthday will be inherently political — as a reminder of the choice voters could face about his fitness for office.

“We haven’t had an 80-year-old president before, but if any lesson emerges from modern history, it is that if a president seems vigorous and well and is doing the job, age has been less of a factor for voters,” said presidential historian Michael Beschloss. “When a president plans to run for reelection at an age the voters haven’t seen before, history suggests that the burden has been on the candidate to show that age will not be a problem.”

Although Biden makes a point of marking other important family days — including Thanksgiving and the anniversary of his son Beau’s death — he rarely does much for his birthday. That is unlikely to change this year, though no plans have been finalized, according to those close to him.

Biden tends to celebrate his birthday with his family. A year ago, he spent the day, a Saturday, at his Wilmington, Del., home except when he ventured out to church. This year, it will come as much of his family will already be in Washington to celebrate the White House wedding of his granddaughter Naomi the day before.

Chatter about Biden’s age has been pervasive throughout the Beltway ever since he signaled he was launching his third presidential campaign back in 2019. He had visibly aged since his time as vice president, growing thinner, with less hair. His stride had also shortened and slowed, not helped by the broken foot he suffered while playing with one of his dogs during the transition. 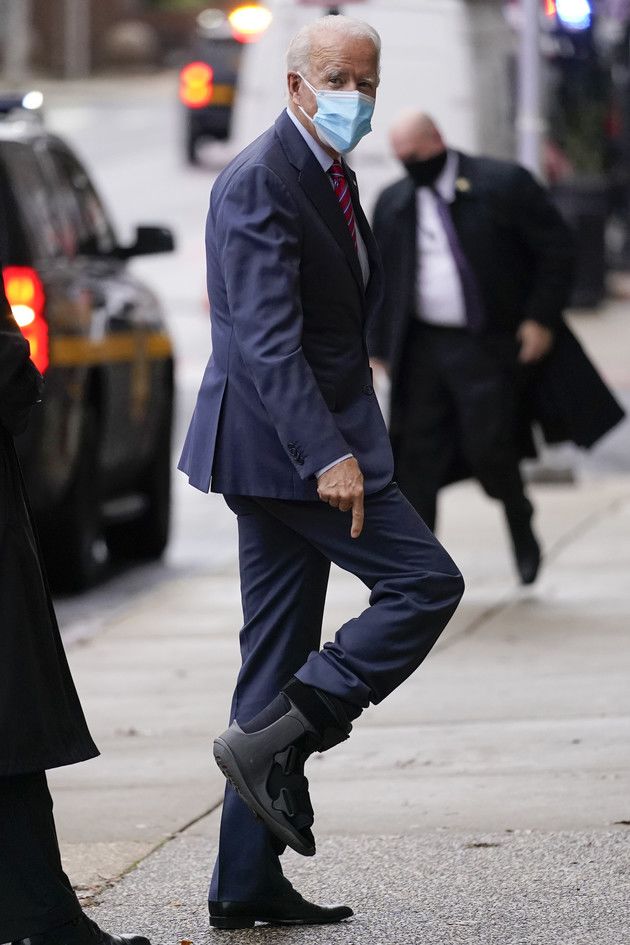 Then President-elect Joe Biden points to the boot on his foot he broke on Dec. 4, 2020, in Wilmington, Del.

The chatter has been fed by eyebrow-raising moments from Biden himself, such as when he spoke at a hunger insecurity conference and called out for an Indiana congresswoman who had died in a car crash months before.

“Jackie, are you here? Where’s Jackie? She must not be here,” Biden said, appearing to forget, or be unaware, that Rep. Jackie Walorski had died.

But White House aides dismissed the notion that such remarks — and other missteps — are a sign of age or a lack of mental acuity and note the extraordinary demands and pressures of the job. And Biden himself has long dubbed himself a “gaffe machine.”

Those close to Biden acknowledge that he tires more easily and, when he does, becomes more prone to such gaffes and sees his stutter become more pronounced. The president has scoffed at the notion that he is too old to run and has signaled that he intends to stand for re-election.

At times, however, he has also had fun with his age, joking to aides about how he is often the oldest in the room.

“The very first president to attend the White House Correspondents’ Dinner was Calvin Coolidge in 1924. I had just been elected to the United States Senate,” Biden joked at the April black-tie dinner. “I remember telling him, ‘Cal, just be yourself. Get up there and speak from the heart. You’re going to be great, kid.’”

Aides both inside and outside the White House have taken steps to prepare for another campaign. They’ve suggested that a campaign kickoff would likely come in the first few months of 2023, which would be commensurate to when other presidents signaled their re-election plans.

Those closest to the president say that family discussions about running, with first lady Jill Biden playing a leading role, could begin over the holidays with a final decision likely coming early in the new year. Some Democrats have quietly wondered if Biden is too old to run again but many close to the president suspect that he will — especially if Donald Trump does.

“The average voter doesn’t care about this. The average voter wants to know what Joe Biden is going to do to make their lives better,” said Jim Messina, who was President Barack Obama’s campaign manager for his 2012 re-election bid. “The White House’s job won’t be to talk about his age, they will sell all the stuff they have done. This guy has done historic things.”

Prior to Biden, the oldest man elected president was Ronald Reagan at the age of 69.

Though known for his own verbal missteps, Trump already tried to make Biden’s age an issue in their first matchup — dubbing his opponent “Sleepy Joe” and claiming he was no longer with it — to little impact. But Republican attacks have only continued, with a persistent drumbeat that Biden is not fit to hold office.

“I think we’re all concerned for President Biden’s mental health,” Sen. Roger Marshall (R-Kan.), a physician, said recently. Without any specific evidence, he added that he had seen a “deterioration” in the president.

But Biden advisers believe the 2020 race dealt with the current president’s age — “Americans already know how old the guy is,” one said recently — and that voters have grown more comfortable with older people in positions of power, whether in politics or business.

To that end, House Speaker Nancy Pelosi (D-Calif.), who is running for re-election this year, is 82. Senate Majority Leader Chuck Schumer (D-N.Y.) is 71. Sen. Chuck Grassley (R-Iowa) is 89.