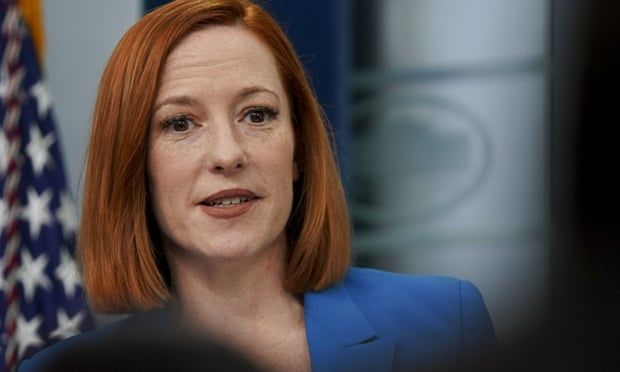 Axios first reported the move on Friday, citing anonymous sources “close to the matter”. Other outlets said they had confirmed the news, and reported that Psaki was expected to stay through the end of April.

Axios said Psaki, 43, had been “treading carefully on the ethics and legal aspects of her plans” and had not yet signed a deal, but was in line to host a show on the Peacock streaming service and feature as a commentator elsewhere.

The site also said Psaki would not replace Rachel Maddow, the liberal-leaning network’s biggest star, in its 9pm weekday slot, contrary to speculation.

MSNBC did not immediately comment. A White House official said: “Jen is here and working hard every day on behalf of the president to get you the answers to the questions that you have, and that’s where her focus is.”

At the daily White House briefing, Psaki told reporters: “You can’t get rid of me yet. I have nothing to confirm about my length of public service or planned service, or anything about consideration about next plans.”

Referring to her recent positive test for Covid-19, she said: “I’m very happy to be standing up here today after it felt like an endless time in my basement quarantining away from my family. Believe it or not, I missed you a lot.

“My focus every day continues to be speaking on behalf of the president, answering your questions, as tough as they may be … I hope that I meet my own bar of treating everybody with fairness and being equitable.”

Psaki was pressed about whether it was ethical to negotiate a move to an outlet to which she continues to speak on the president’s behalf.

“I have always gone over and above the stringent ethical and legal requirements of the Biden administration,” she said, adding that she had “taken steps to recuse myself from decisions as appropriate” and worked with the office of the White House counsel as required.

Psaki also said: “At whatever time I leave the White House, I can promise you the first thing I’m going to do is sleep and spend time with my three- and six-year-old, who are my most important audiences of all.”

Psaki worked for Barack Obama’s presidential campaign in 2008 and then in his White House press team. After a spell as spokesperson for the state department she became White House communications director.

With Donald Trump in office, Psaki became a commentator for CNN. On returning to the White House in January 2021, she indicated that she expected to work for Biden for not much more than a year.

After four chaotic years under Trump, Psaki returned White House press briefings to normal daily order. She became celebrated by some on the left, however, for sometimes caustic exchanges with reporters, prominently including Peter Doocy, a correspondent for Fox News.

Last month, Doocy asked Psaki if it was true she was leaving.

“I have more than enough on my plate here,” Psaki said. “So you can’t get rid of me quite yet. Sorry, Peter, for you on that.”

The path from Brady Briefing Room to TV studio has become well-trodden.

On the left, Symone Sanders, a former adviser to the vice-president, Kamala Harris, is scheduled to begin hosting for MSNBC and Peacock in May.

Psaki has contracted Covid-19 twice while working for Biden. In her most recent enforced absence, Jean-Pierre first stepped up to the podium. After Jean-Pierre tested positive, Bedingfield took a turn in the role.

In January 2021, Psaki told the New York Times: “I think there frankly needs to be diverse spaces and voices as communicators. Women, certainly, but beyond that.”

If she succeeds Psaki in the role, Jean-Pierre would be the first Black person to be White House press secretary.

This week, an unnamed Biden official told the Hill: “This administration really cares about showing diversity and representation, so breaking barriers is a big thing. It has felt like Karine has been groomed for this and it would backfire if she didn’t get it.”