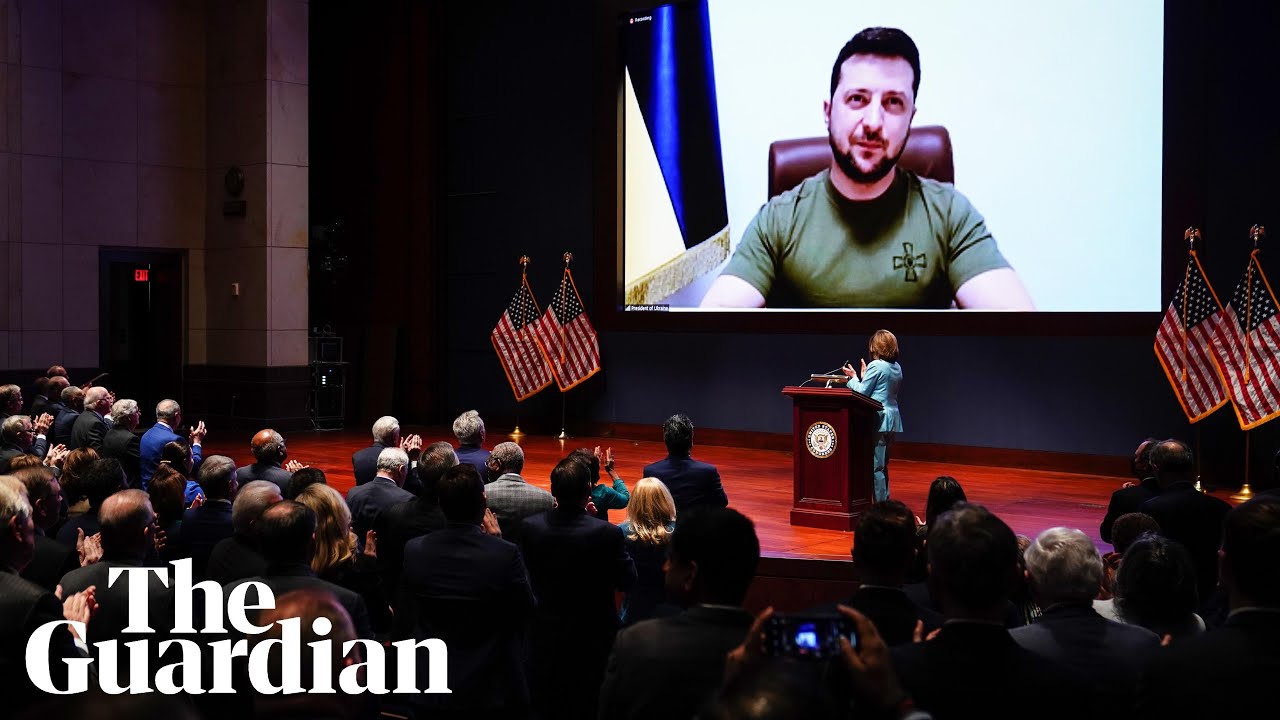 Joe Biden has denounced Vladimir Putin as a war criminal, delivering his sharpest rebuke yet of the Russian leader just hours after the Ukrainian president pleaded with Congress to provide more aid to his country.

“I think he is a war criminal,” Biden said of Putin on Wednesday.

The president’s comment marked a distinct rhetorical shift for the White House, which had deflected previous questions about whether Putin should be considered a war criminal for the Russian military’s attacks on Ukrainian civilians.

“There is a process, and we have stood up a process internally – an internal team – to assess and look at and evaluate evidence of what we’re seeing happen on the ground,” the White House press secretary, Jen Psaki, said earlier this month.

Biden’s comments came hours after the Ukrainian president, Volodymyr Zelenskiy, delivered an impassioned virtual address to the US Congress. From the besieged capital of Ukraine, Zelenskiy pleaded with lawmakers to do more to protect his nation against the brutal Russian invasion, in an emotional appeal that invoked the painful memories of Pearl Harbor and the September 11 terrorists attacks and echoed Martin Luther King’s call for a more peaceful future.

The remarks to members of both chambers of Congress came on day 21 of the battle for Ukraine’s survival that Zelenskiy cast as the frontline of a global fight to protect democratic values.

Wearing his army green T-shirt, with a Ukrainian flag draped behind him, Zelenskiy was direct: “I call on you to do more.

“The destiny of our country is being decided,” he told Congress. “We need you right now.”

Speaking hours after Zelenskiy’s address, Joe Biden announced the US would provide Ukraine with an additional $800m in security assistance. The aid will include 800 anti-aircraft systems, 9,000 anti-armor systems, 20 million rounds of ammunition and drones to help Ukraine fight back against Russian aggression.

Appearing by video link into the Capitol, Zelenskiy asked the US to send more military aid and to impose harsh new sanctions on Russian lawmakers. Borrowing King’s famous words from his “I have a dream” speech, Zelenskiy said Ukraine needed help protecting his air space: “Today, I can say ‘I have a need’: I need to protect our sky,” he said.

Acknowledging that a no-fly zone was a non-starter for the US, Zelenskiy asked the packed auditorium of lawmakers to consider an “alternative”, including more aircraft and better weaponry, to help Ukraine “close the skies”. Biden did not directly acknowledge Zelenskiy’s request in his own remarks, but his administration has so far flatly ruled out an option of the west imposing a no-fly zone over Ukraine.

The White House is determined to avoid direct combat between the US and Russian forces – a conflict the US president has said would lead to “world war three”.

In referencing Pearl Harbor and 9/11, attacks on the US that came from the sky, Zelenskiy asked members of Congress to imagine Ukraine’s experience: “Our country experiences this every day, right now, at this moment, every night for three weeks now.”

He also played a wrenching video that captured the brutal Russian onslaught, which has turned once-vibrant city streets into urban war zones. Silence fell over the auditorium as it played, displaying images of the bombs crushing city buildings and civilians, including children, bloodied and killed in the Russian assault.

Before and after he spoke, lawmakers gave Zelenskiy a standing ovation. He placed his hand over his heart in gratitude. He delivered most of his speech in Ukrainian, but made a final appeal in English.

“I see no sense in life if it cannot stop the deaths,” he said, appearing emotional as he spoke of the 100 children he said have died in the bombardment.

Lawmakers left the auditorium visibly moved by the remarks of the embattled Ukrainian leader, as he rallies his nation and the world from the frontline of what many believe is the most dangerous security threat to Europe since the end of the second world war.

Senator Ben Sasse, a Republican from Nebraska, implored the US to send more military assistance.

“They’re fighting for the free world,” he said. “We’re a superpower. We should act like it.”

Biden has said he speaks to the Ukrainian leader privately nearly every day. But on Wednesday, before the US president spoke, Zelenskiy challenged him publicly to do more to stop the bloodshed. 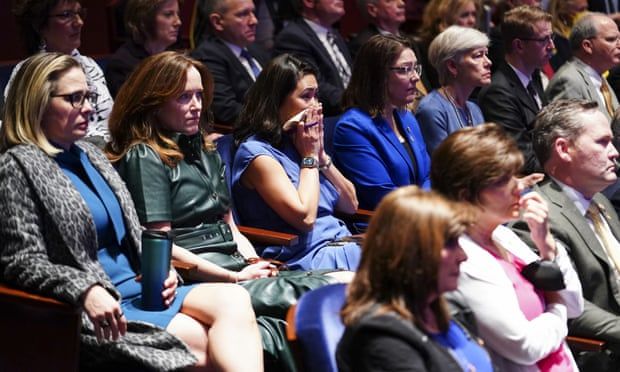 Members of Congress in the auditorium in Washington.

Announcing the additional security assistance to Ukraine, Biden pledged that America would stand with Zelenskiy and his people in the weeks and months to come.

“I want to he honest with you: this could be a long and difficult battle. But the American people will be steadfast in our support of the people of Ukraine in the face of Putin’s immoral, unethical attacks on civilian populations,” Biden said. “We’re going to continue to have their backs as they fight for their freedom, their democracy, their very survival.”

More than 3 million people have fled Ukraine since the invasion, causing the fastest-growing refugee crisis in Europe since the second world war.

Zelenskiy’s speech follows his similar addresses to the UK parliament, in which he invoked Shakespeare and echoed Winston Churchill’s famous wartime oration to the House of Commons about defiance in the face of an overwhelming aggressor.

On Tuesday, Zelenskiy had appealed to Canada’s parliament, and the nation’s large Ukrainian diaspora, to rally behind his country. That evening, the prime ministers of Nato allies and Russian neighbors Poland, the Czech Republic and Slovenia traveled by train to Kyiv, which was under a 35-hour curfew as Russian shells and missiles rained down on the capital, striking residential areas and civilian infrastructure.

“For years, we heard about the apparently open door, but have already also heard that we will not enter there, and these are truths and must be acknowledged,” the Ukrainian president said.

A growing chorus of lawmakers on Capitol Hill have been publicly pressuring Biden to increase military aid to Ukraine, including sending fighter jets and air defense systems. The calls come as the US and allies tighten their economic vice on Russia, apparently leading Moscow to turn to China for financial support.

Biden will travel to the Belgian capital, Brussels, next week for a meeting with Nato leaders to discuss the crisis in Ukraine and to reassure allies of the US’s commitment to the defense alliance.