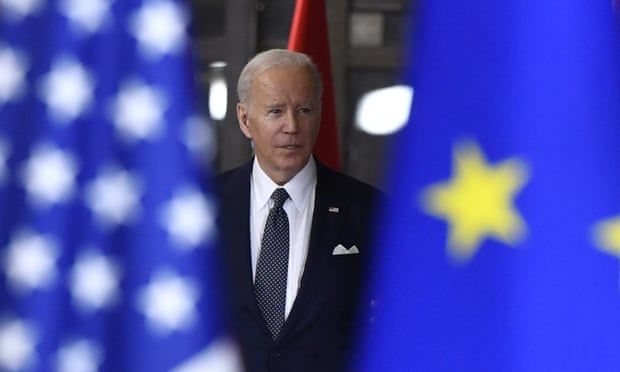 US increasing exports of seaborne liquefied natural gas to cut Europe’s dependence on Russia and starve war machine
Joe Biden has agreed a landmark energy supply deal with the EU under which the US will increase transatlantic gas deliveries, in the hope of weakening the power the Kremlin wields thanks to its natural resources.

Speaking in Brussels after the deal was agreed on Friday, the US president said Vladimir Putin exploited Russia’s status as Europe’s main supplier of gas to “coerce and manipulate his neighbours” and that the proceeds of gas and oil sales “drive his war machine” during the invasion of Ukraine.

He said the partnership with the EU would strip Putin of that weapon by ending Europe’s dependence on Russian energy before the end of the decade.

Russia supplied about 155 billion cubic metres (bcm) of gas to Europe last year and typically accounts for about 40% of the continent’s demand.

The EU has already said it hopes to cut Russian imports by two-thirds by the end of the year, by importing liquefied natural gas (LNG) from other countries, and bringing forward renewable projects and energy efficiency measures.

Under the deal with Biden, the US will assist in the short term by delivering increased shipments of LNG to Europe, with 15bcm added this year.

That implies 37bcm in deliveries, while Europe has committed to an eventual 50bcm a year in additional imports, as part of a plan to unhook itself from Russian gas supplies by the end of the decade.

Ursula von der Leyen, the president of the European Commission, said: “This amount is replacing one-third already of the Russian gas going to Europe today. So we are right on track now to diversify away from Russian gas and towards our friends and partners, reliable and trustworthy suppliers.”

At the same time, the EU will try to keep climate goals on track by powering gas infrastructure with clean energy and reducing methane leaks that could worsen global heating.

A combination of energy efficiency savings in homes and wind and solar projects could shave 20bcm off European gas demand.

Biden said such a step was not only “the right thing to do from a moral standpoint” but was “going to put us on a stronger strategic footing”.

Asked how the US would increase its supply of LNG, given that producers are already running at full steam, a senior White House official said the plan would involve “swaps” with international partners, particularly in Asia, to free up gas during Europe’s winter.

The initiative will require Europe to build new terminals for importing LNG, with current infrastructure unable to cope with a significant rise in imports. Germany, Europe’s largest economy, has no LNG terminals but said on Friday that it aimed to end its reliance on Russian gas by 2024.

New pipelines – future-proofed so that they can be retrofitted to transport hydrogen – will also be needed.

“We aim to reduce this dependence on Russian fossil fuels and get rid of it,” said Von Der Leyen.
#Joe Biden
Add Comment