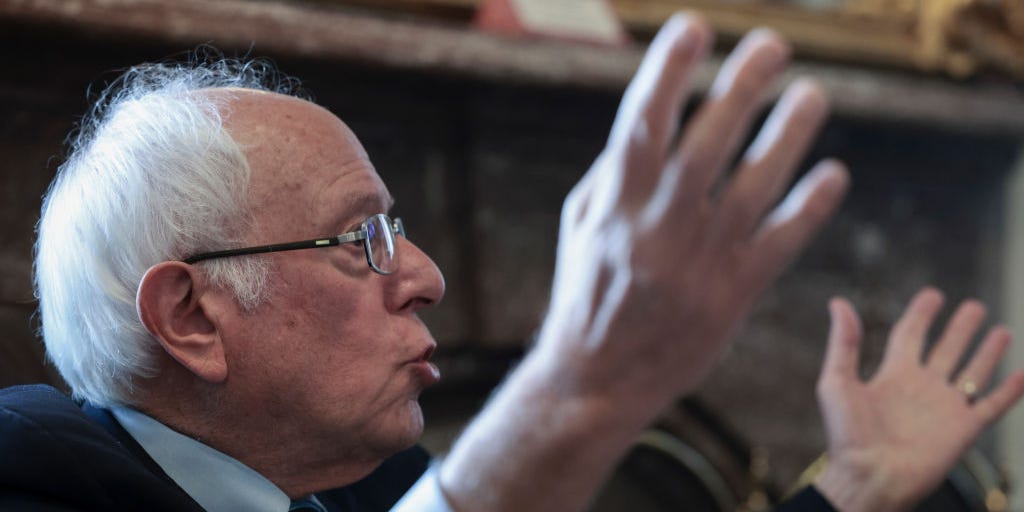 It's the war of loan forgiveness, as Republicans and Democrats continue to go back and forth over President Joe Biden's decision to relieve student debt.
Vermont Sen. Bernie Sanders weighed in on Friday with a typically fiery response.

"I hear Republicans complaining about $20,000 in student debt forgiveness. Funny, I didn't hear those complaints when Trump declared bankruptcy 6 times & had $287 million in loans forgiven by big banks," Sanders tweeted. "The GOP l-o-v-e-s socialism for the rich, rugged individualism for the rest."

On Wednesday, Biden announced up to $20,000 in student-loan forgiveness for Pell Grant recipients making under $125,000 a year, along with up to $10,000 in relief for other federal borrowers under the same income cap. As expected, Republican lawmakers were quick to slam the announcement, with many arguing the broad forgiveness is costly and unfair to taxpayers.

It's a criticism that Biden himself was quick to rebuke, questioning the fairness of taxpayers subsidizing tax breaks for multi-billion dollar companies and pointing out the GOP lawmakers who received business loan forgiveness during the pandemic.

The Washington Post reports that Hillary Clinton was correct to assert in 2016 that Donald Trump had "taken business bankruptcies six times." Trump had said it happened four times, and told the Post that he was tallying the first three bankruptcies as one. The New York Times found in a 2020 analysis of his tax returns that Trump had around $287 million in debt forgiven.

Sanders is not the first Democrat to scrutinize GOP pushback on Biden's relief. After Senate Minority Leader Mitch McConnell called the president's student-loan forgiveness "astonishingly unfair," Massachusetts Sen. Elizabeth Warren was quick to respond by noting that when McConnell graduated from University of Louisville, he only paid $330 in annual tuition.

"Senator McConnell graduated from a school that cost $330 a year," Warren wrote on Twitter on Thursday. "Today it costs over $12,000. McConnell has done nothing to fix it — and is irate that the President is stepping up to help millions of working Americans drowning in debt. He can spare us the lectures on fairness."

The White House itself has also taken to Twitter to call out some Republican lawmakers by name — those who have complained about Biden's relief while also having gotten their Paycheck Protection Program (PPP) loans forgiven. While GOP Sen. Marco Rubio wrote in a Friday op-ed that PPP loans and student loans are not comparable, National Economic Council Deputy Director Bharat Ramamurti said "we absolutely think it's a fair comparison."

The Education Department is set to announce further details on Biden's relief plans in the coming weeks, and an application for the loan forgiveness is set to become live in early October.
#Donald Trump  #Joe Biden
Add Comment