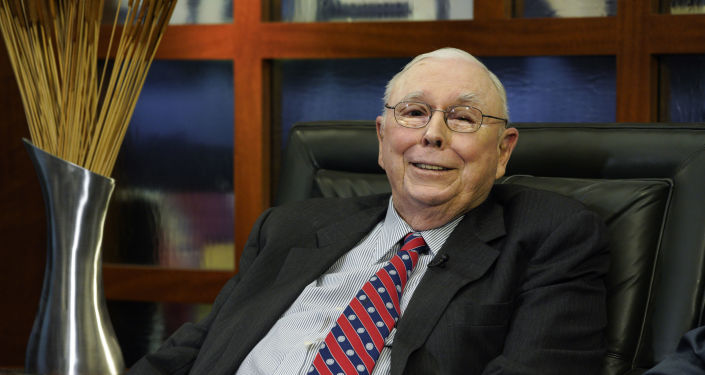 This year, the world's largest cryptocurrency experienced a meteoric rise, topping higher than $62,000 per coin in April, as companies ranging from Tesla to big Wall Street banks helped to introduce bitcoin to the mainstream, so now the famous crypto has a market capitalization of $1 trillion.

With bitcoin's record-breaking run over the last few months, Berkshire Hathaway Vice Chairman and worldwide known investor Charlie Munger's discontent for the digital asset has only grown, he said on Saturday at Berkshire’s annual shareholder meeting.

"Of course I hate the bitcoin success," the 97-year-old Munger said."I don’t welcome a currency that’s so useful to kidnappers and extortionists and so forth, nor do I like just shuffling out of your extra billions of billions of dollars to somebody who just invented a new financial product out of thin air."

He continued by saying that he thinks "that the whole damn development is disgusting and contrary to the interests of civilization," to put it "modestly."

Berkshire's CEO Warren Buffett, who had previously ignored the question about bitcoin, said in response to Munger's comment, "I'm alright on that one." The "Oracle of Omaha" said he didn't want to comment on the digital token specifically because he did not want to annoy anyone who is long.

Some businesses and government officials are turning to bitcoin as a reserve investment. Tesla recently placed a $1.5 billion bet on bitcoin and now recognizes it as a form of payment for its vehicles. Meanwhile, Goldman Sachs and Morgan Stanley are looking to provide bitcoin exposure to their high-net-worth clients.

The latest comments are not the first time Munger has slammed the much-hyped cryptocurrency, as he has long chastised bitcoin for its high volatility and lack of regulatory oversight. At the Daily Journal's annual shareholders meeting in February, Munger said that bitcoin is too risky to be used as a medium of exchange.

"It’s really kind of an artificial substitute for gold. And since I never buy any gold, I never buy any bitcoin," Munger said. "Bitcoin reminds me of what Oscar Wilde said about fox hunting. He said it was the pursuit of the uneatable by the unspeakable."

The world's most famous cryptocurrency operating on a blockchain has the benefit of avoiding the drawbacks of centralized currencies, such as inflation and financial crises, enthusiasts claim. The bitcoin digital currency has a 21 million-unit supply cap. Nearly 18.6 million blocks have already been mined, and experts predict that mining will continue for another 120 years as new blocks become more difficult to produce.