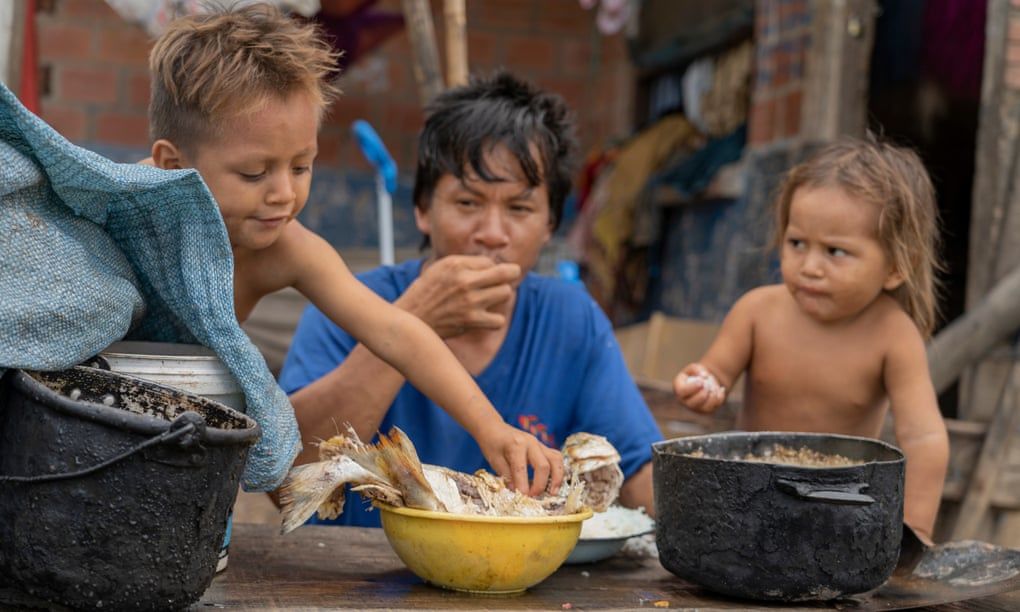 Outside a small brick house shared by four families, Daniela Prada, who is heavily pregnant, gathers guava leaves to make a tea for her two-year-old son.

“My baby gets sick a lot,” she says, boiling a pot of water in her outdoor kitchen. “He always has diarrhoea and last night he had a fever. Most of the time I give him natural medicine.”

In an identical house nearby, town leader Oscar Lurici says fevers are a part of life in Eyiyo Quibo village on the Beni River in northern Bolivia. People of all ages suffer from debilitating head and body aches, bouts of vomiting and diarrhoea, memory loss and tiredness. Some children show signs of cognitive development delays. 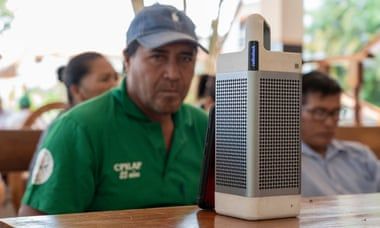 Esse Ejja leader Oscar Lurici listens to the UN special rapporteur on toxics and human rights at an online event.

“We do not know for sure what causes these sicknesses,” Lurici says. “We are starting to think this is all because of water contamination from the mercury found in the mining waste.”

Lurici’s 17-year-old son, also called Oscar, began suffering from exhaustion, aches and trembling in early 2019. Various doctors diagnosed ailments such as Parkinson’s disease and anaemia. One suggested the illness came from the contaminated river water. Before the year was out, Oscar had died.

Bolivia has long been criticised for using mercury in small-scale gold mining, and growing evidence shows that mercury contamination is causing illnesses in poor communities. Mercury is used across the country, in mining projects in the cordilleras of the Andes and on dredgers extracting gold from the sediment at the bottom of waterways. The uncontrolled disposal of mercury waste creates toxic flows in Bolivia’s river systems. 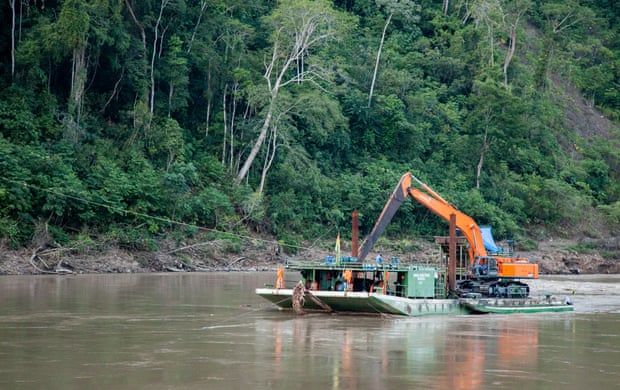 A dredger outside of Guanay, Bolivia, April 2019. During the pandemic, as global gold prices rose, mining activity increased.

Known as the “people of the river”, the Esse Ejjas survived as nomads for generations, hunting and fishing along the region’s waterways. After settling in Eyiyo Quibo, men and boys continued to fish, spending days travelling the river, camping on its banks and working in pairs to fill their long, narrow wooden boats with catfish and piranhas.

In cases around the world, including a study in the Brazilian Amazon published by the International Journal of Environmental Research and Public Health in 2020, researchers have found fish to be heavily contaminated with mercury, and believe fish-based diets in mining areas are causing increased mercury levels in indigenous people. This could explain some of the illnesses in Eyiyo Quibo.

In 2019, representatives of the Bolivian volunteer organisation Reacción Climática took hair samples from women at Euiyo Quibo, including Prada. In total, 64 samples were taken from Euiyo Quibo and Portachuelo, another Esse Ejja community 380km (235 miles) north, for a study by the International Pollutants Elimination Network (Ipen) to evaluate levels of mercury in people living near small mines in four Latin American countries: Brazil, Venezuela, Colombia and Bolivia. 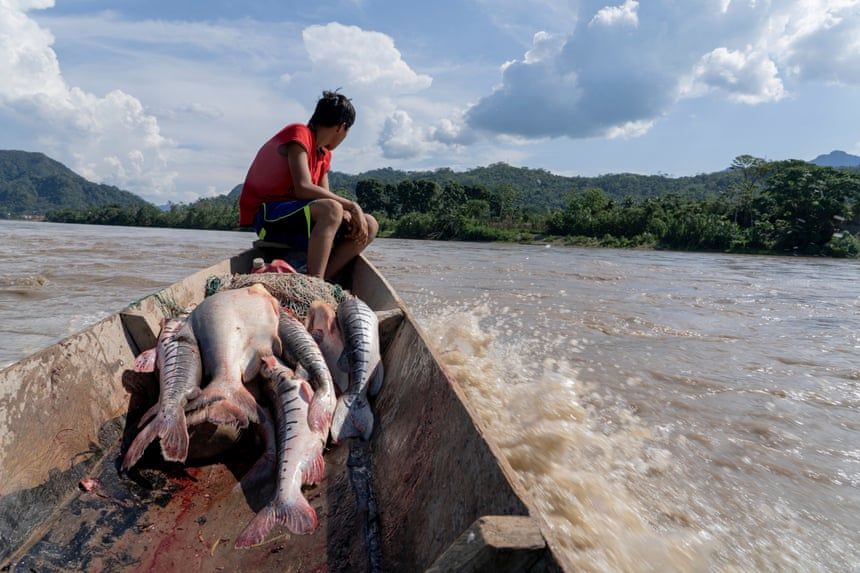 A young Esse Ejja boy takes his catch to a wholesaler outside of town.

Published in June 2021, the study found that women from the Esse Ejja communities, the only participants not living near a mine, had by far the highest levels of mercury – on average almost eight times the accepted threshold of one part per million (ppm), with one sample reaching 32.4ppm. The results suggested a correlation between mercury in the body and fish consumed.
A man puts his hands to his head in apparent despair as he looks at a strip of bare earth through the scrub forest
Rocky road: Paraguay’s new Chaco highway threatens rare forest and last of the Ayoreo people
Read more

The findings rang alarm bells internationally. In September, the UN special rapporteurs on toxics and human rights and on the rights of indigenous peoples, Dr Marcos Orellana and José Francisco Cali Tzay, submitted a letter to the Bolivian government calling out Bolivia’s inaction on the regulation, use, and trade of mercury, with a focus on small-scale gold mining. They gave Bolivia 60 days to respond.

In Eyiyo Quibo, where families eat river fish daily, fear is rising. “Sometimes babies here are born disfigured, or sick,” Prada says, sitting on the dirt floor of her kitchen. “Now I worry about the health of my children. I worry that they get sick, that they will die from the contaminated fish.”

On 8 December, on a hotel patio in Rurrenabaque, north Bolivia, a group of worried Esse Ejjas people huddled around a laptop to hear Orellana speaking at an online event hosted by Reacción Climática and the Bolivian Documentation and Information Centre (Cedib). 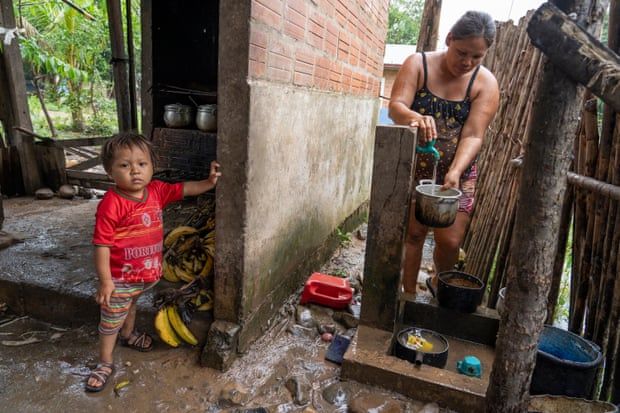 Daniela Parada, 28, a participant in the international hair study on mercury contamination in the community, prepares a tea for her sick son.

“Here is where a community lives their life according to their ancient traditions in close relation to their natural resources, including rivers, and they may have been contaminated by activities that are being carried out in other places and for the benefit of other people,” Orellana said. “That is a clear example of environmental injustice.”

Orellana’s main issue was the Bolivian government’s lack of engagement with the Minamata Convention on Mercury, an agreement of 128 countries to curb or eliminate almost all uses of mercury, including in small-scale gold mining, which came into force in 2017. Bolivia ratified the agreement in 2015, committing to develop and execute plans to reduce and control mercury markets and protect vulnerable populations from contamination.

Yet while neighbouring countries such as Peru have been curbing or eliminating mercury imports, a Cedib report from September 2020 showed that the mercury economy in Bolivia was larger than would be required for the country’s gold output, suggesting Bolivia was now the regional hub of illicit sales.

Two days after the online event, Orellana received a response from the attorney general of Bolivia. The letter highlighted state pilot programmes working with miners to promote new technologies to reduce mercury use, and reiterated the laws and Bolivian constitution that call for the protection of the rights and health of indigenous people. Importantly, the document referred to a two-year project to develop a national action plan to address mercury contamination under the Minamata agreement, and another to accelerate the meeting of the commitments of the convention through a multimillion-dollar regional project with its neighbours. 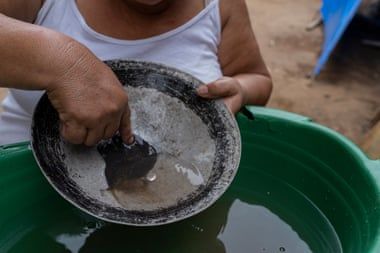 A gold prospector mixes liquid mercury with river sediment and water to create an alloy of mercury and gold particles.

The recent international attention has prompted regional and national mining cooperatives to ask the Bolivian government for alternatives to mercury to use in gold mining. “We do not intend to do more damage. On the contrary we want to do responsible mining,” Vicente Choque, president of the Federation of Gold Mining Cooperatives of the North of La Paz, said in a press conference after the government’s response. “We ask the mining authorities, the government and others to propose policies to solve these problems.”

For now, the importation, sale, use and re-exportation of mercury in Bolivia remains uncontrolled and the Beni River continues to be poisoned by gold mining activity, its waters reaching some of the world’s most biodiverse regions, where mining activity encroaches on the homes of an unmeasurable number of indigenous people, including the Esse Ejjas. 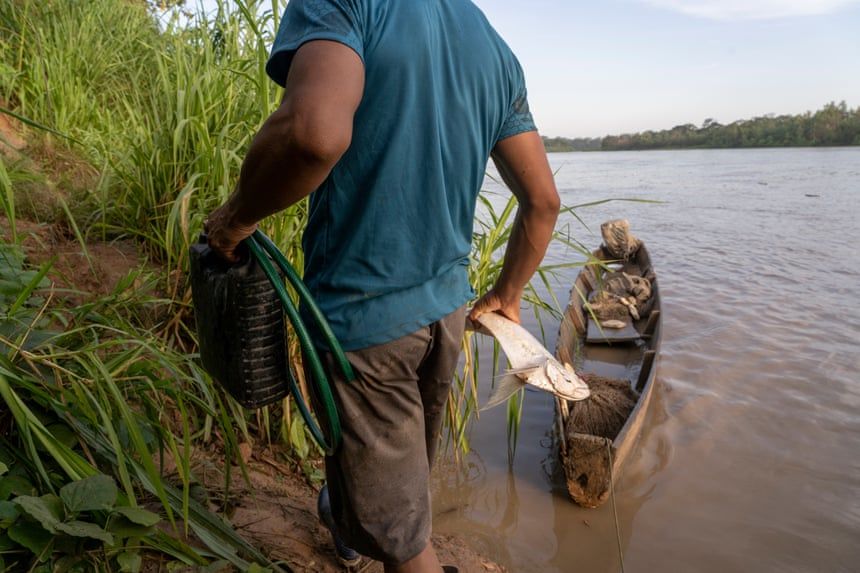 In Eyiyo Quipo, the fishers continue to bring in their catch for families who rely on the fish for food and income. Prada continues to pick medicinal plants to ease her son’s fevers and pains, and worries about what illnesses she may be passing on to her unborn child, due this month.

Orellana welcomes the goldminers’ statement as a positive step, but says the government needs to “establish a policy that allows it to decisively control and reduce the use of mercury in small-scale gold mining”.

Anna 8 days ago
Mercury is very dangerous and yes it is used to pick up gold and then burned off to recover the gold. But funny there is not mention of all the vaccines that also contain mercury. It is call Thermasol I believe on the vaccine insert.
View all comments (1)Add comment