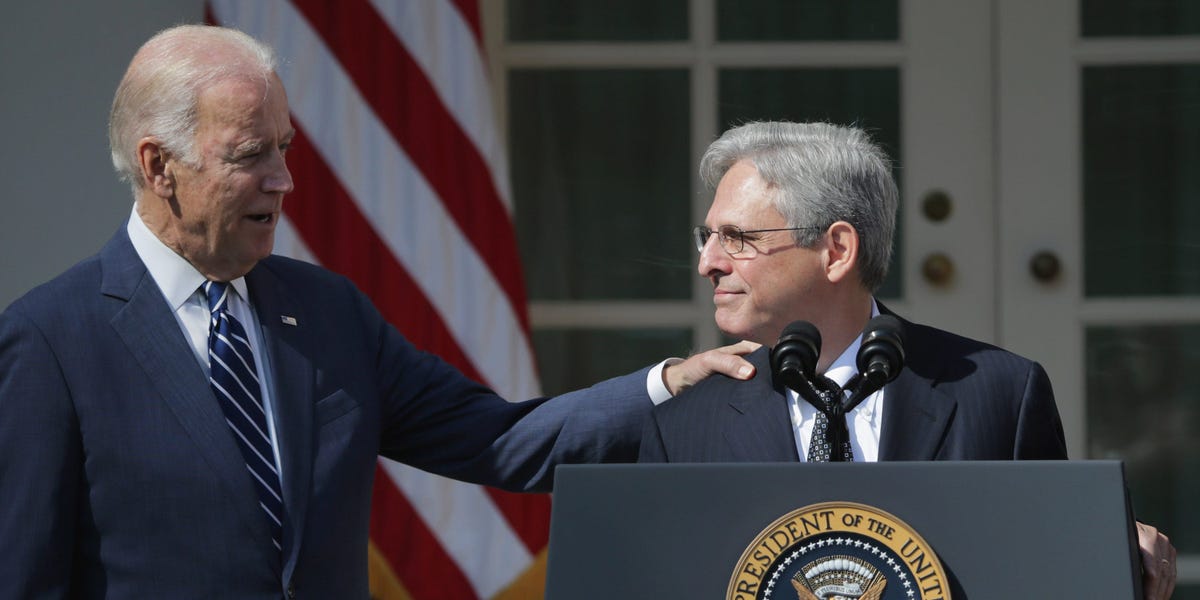 Two months after being named as President Joe Biden's pick for attorney general, Garland is still awaiting Senate confirmation. But Insider has learned the incoming top US law enforcer has been busy behind the scenes building out a team of top-tier advisers who will join him in the monumental task of restoring integrity and independence to a Justice Department that is emerging downtrodden and demoralized from the Donald Trump era.

Garland has drawn from his expansive, largely Ivy League-educated network of law clerks who have worked closely with him during his 24-year tenure as a federal appeals court judge, according to people familiar with his hiring. He's also turning to former Senate aides and a pair of federal prosecutors, the sources said.

The longtime judge and former federal prosecutor is expected to be confirmed with bipartisan support in the coming days. For the 68-year-old Chicago native, it will be a capstone moment carrying some measure of vindication after seeing his nomination to fill the late Justice Antonin Scalia's Supreme Court seat blocked by Senate Republicans in 2016.

In preparation for his imminent arrival as attorney general, Garland is turning to three former clerks to fill key adviser posts, including Kate Heinzelman, a former Obama White House lawyer and deputy general counsel at the Department of Health and Human Services.

Heinzelman clerked for Garland from 2009 to 2010. Like many of his clerks, she then made the jump to the Supreme Court. In the 2010-11 Supreme Court term, she clerked for Chief Justice John Roberts, an appointee of former President George W. Bush.

More recently, at the white-shoe law firm Sidley Austin, Heinzelman advised clients on privacy and cybersecurity issues, according to the firm's website. She will serve as Garland's chief counsel.

Two other past clerks of Garland's are also joining him in the attorney general's office: Maggie Goodlander, who served as counsel to the House Judiciary Committee in the first impeachment of then-President Donald Trump, and Brian Fletcher, a former Stanford Law School professor who previously served in the Justice Department office that handles Supreme Court arguments.

Before joining the solicitor general's office, Fletcher worked in the Supreme Court and appellate litigation practice of Wilmer, Cutler, Pickering, Hale and Dorr. The DC-based law firm has fed a number of top officials into the Biden administration, including Secretary of Homeland Security Alejandro Mayorkas and deputy White House counsel Danielle Conley.

At Stanford, Fletcher was co-director of the law school's Supreme Court clinic alongside Pam Karlan, who is now the acting head of the Justice Department's civil rights division. Karlan, a leading Supreme Court advocate known for championing progressive causes, praised Fletcher last year in an announcement that he was joining the Stanford faculty as an associate professor.

"Baseball scouts talk about five tool players, and Brian is the paradigmatic five-tool Supreme Court lawyer: He writes powerfully and quickly, has great judgment, gives the students exactly the right combination of guidance and ownership, and is wonderfully supportive of his colleagues and staff as well," Karlan said.

Fletcher clerked for the late Justice Ruth Bader Ginsburg after his year with Garland.

Goodlander, who is married to Biden national security adviser Jake Sullivan, worked as an advisor to former Sens. Joe Lieberman and John McCain before clerking for Garland from 2016 to 2017. She went on to clerk for Justice Stephen Breyer, further sealing Garland's reputation as a so-called "feeder" judge who springboards clerks to the Supreme Court.

Garland's clerks have landed in prominent roles elsewhere in the Justice Department and broader Biden administration. In January, Elizabeth Prelogar, a former Garland clerk who served as a legal adviser to Special Counsel Robert Mueller in the Russia investigation, was named the acting solicitor general.

Prelogar, who had previously served in the solicitor general's office, clerked for Ginsburg and then Justice Elena Kagan following her year in Garland's chambers.

Johnson, Visser and the three former clerks will work alongside Garland's chief of staff, Matt Klapper, who has shepherded the judge through his Senate confirmation process. Klapper was previously a longtime adviser to Sen. Cory Booker, a New Jersey Democrat who supported Garland in the 15-7 vote to advance his nomination out of the Senate Judiciary Committee.

Upon Garland's expected Senate confirmation, he will replace Monty Wilkinson, a longtime Justice Department official who has served as acting attorney general since Biden's inauguration on January 20.

Anthony Coley, a former communications director for the late Sen. Ted Kennedy, is also serving as the incoming attorney general's top spokesperson. In the Obama administration, Coley served at the Treasury Department as a deputy assistant secretary for public affairs.

In seeking out top aides with extensive political experience, Garland has demonstrated an understanding of what he may be lacking after nearly a quarter-century in the quasi-monastic life of a federal appeals court judge, former Justice Department officials said. While known as a skilled navigator of Washington, Garland garnered a reputation as a moderate judge who stayed clear of the political crucible.

"I will never make a decision in the department based on politics or partisanship," Garland said last month at his confirmation hearing.

"All I can ask you to do is trust that, based on the record of my 24 years as a judge, my entire career before that as a prosecutor and my life before that," he told Sen. Ted Cruz, in response to questioning about whether he would allow the former US attorney in Connecticut, John Durham, to continue his investigation as special counsel into the origins of the Russia investigation.

"That's my record of integrity, and that's what you have before you," Garland replied.

In interviews, Garland's former clerks described him as a warm-hearted but demanding judge who sweated word choice and remained active in their lives well after their year in his chambers. Exacting in his process, Garland's preferences gave rise to a manual passed down through generations of clerks with instructions on a range of tasks, including how to upload documents onto the judge's iPad.

But there was never a hint of politics or results-driven thinking within his chambers, Garland's former clerks said. At his Senate confirmation hearing last week, he pledged to protect the DOJ against any political interference following an era in which Trump appointees were often seen and documented as interfering in investigations and prosecutions to the benefit of the then-president's allies.

"He's a person of tremendous integrity and he rightly expects the same of people who work for him," said Previn Warren, a former Garland clerk who is now a partner at the law firm Jenner & Block.

"After turning 20 or 30 drafts of an opinion with the judge, you never see legal writing the same way," added Warren, who served as the top lawyer for Pete Buttigieg's 2020 presidential campaign. "You become sensitized to the importance and nuance of every word."