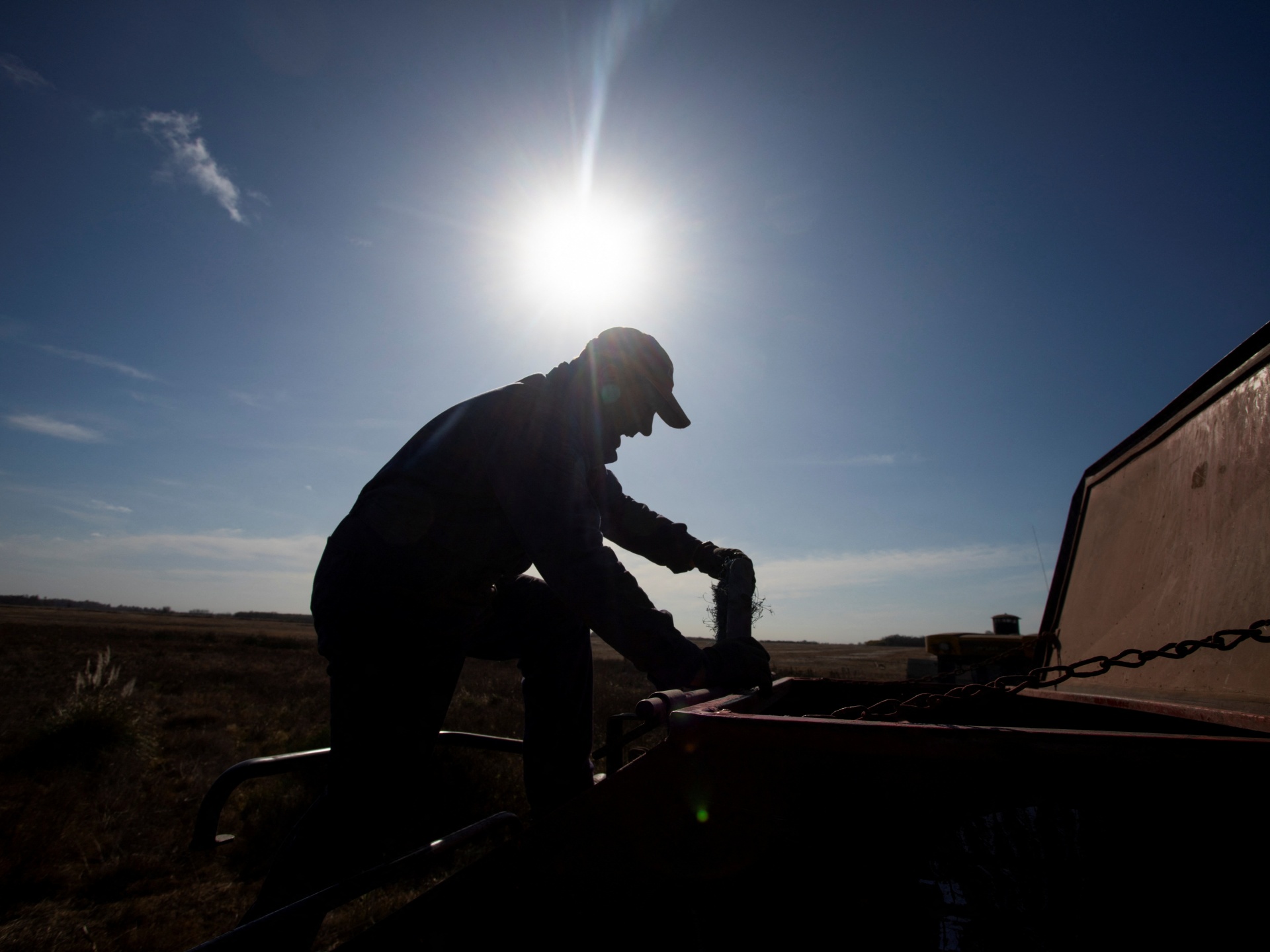 The government wants the agricultural sector to boost exports, but farmers say they are protecting themselves from the economic crisis.

Typically, what Walter Malfatto reaps, he sells. For the 59-year-old farmer who toils 700 hectares (1,730 acres) of farmland in the province of Buenos Aires, that consists mostly of soybeans, along with wheat and barley.

But this year, Malfatto estimates he has stored 60 to 70 percent of his harvest in silo bags – a method he says is intended to insulate him from an ongoing economic crisis that has eroded the Argentine peso.

“They’re going to have to devalue the currency soon,” Malfatto told Al Jazeera. “The agricultural sector won’t be able to sustain it otherwise.”

As a grain shortage fuelled by the war in Ukraine wreaks havoc in some parts of the world, Argentina, a breadbasket nation, is caught in its own standoff.

President Alberto Fernandez has accused the agricultural sector of hoarding $20bn worth of products as it speculates with a volatile economy and a currency devaluation he says is not coming. “They’re not going to twist my arm,” the president said in a public address last month that took aim at the “speculators”.

Inflation is expected to hit 90 percent this year in Argentina. The country is on its third economy minister in six weeks, and the Central Bank is pulling levers intended to build up its dwindling US dollar reserves.

One key place the government has looked to is the powerful agricultural sector.

Yet an attempt to incentivise more soy exports through a new arrangement that increases the amount of money farmers make has not yielded the desired results. The system, available until the end of August, gives producers more options to convert their earnings to US dollars, as well as a better exchange rate for a portion of the sales.

The government says it needs exports to increase so that more US dollars flow into its reserves in particular so that it can cover the cost of importing natural gas, which has gone up in both price and consumption during the country’s winter months.

Meanwhile, earlier this year, the government hiked export taxes on soy oil and flour by two percentage points, to 33 percent, in a bid to help stabilise domestic prices. Wheat and corn exports are taxed at a rate of 12 percent.

“I have to rent farmland and I rent it at the value of soybeans,” said Malfatto, president of the Argentine Agrarian Federation for the branch of the city of Bragado. “I don’t want to liquidate it because I want to make sure that I have enough to buy the materials that I need, and to live, as well.”

The agriculture sector is the country’s largest exporter. It generates two out of three dollars that enter the country, said Juan Manuel Uberti, a market analyst with Grassi SA, a grains broker based in the city of Rosario, Santa Fe province.

Although 2022 has been a strong harvest year and the war in Ukraine has driven prices up, the sale of soy, Argentina’s most important crop, is down, he noted. According to government statistics, Argentina’s farmers have sold 21.5 million tonnes of soybeans, compared with 26.7 million at the same time last year. That represents 49 percent of their estimated harvest, and about 9 percent less than one year ago.

“It really is the lowest number in the last 17 years,” Uberti told Al Jazeera of sales. “But the reality is that this is only for soy. Wheat and corn have been selling very well at accelerated rates and in similar amounts, or even more than last year.”

All told, Argentina shipped 6 percent more agro products, including grains, oils and other subproducts, in the first six months of this year, compared with last year, according to the Rosario Board of Trade. 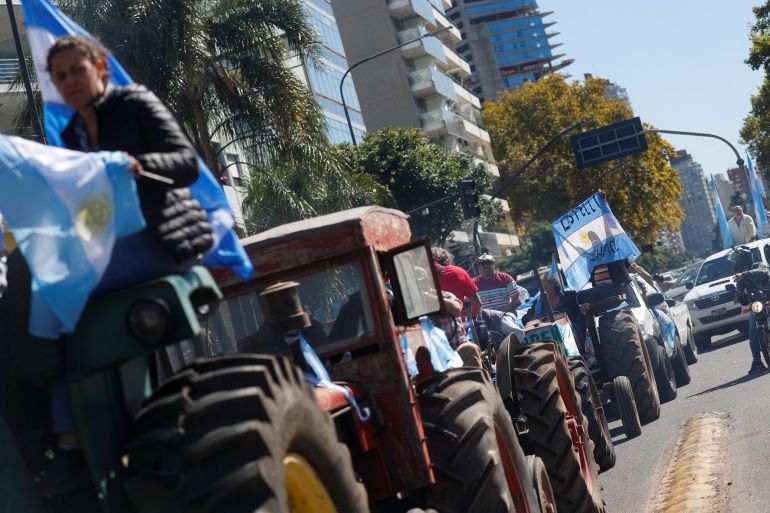 Farmers ride their vehicles to protest export taxes on farm goods, in Buenos Aires in April

Part of the challenge is the fact that the country effectively operates on a bi-monetary system with the Argentine peso and the US dollar. In times of crisis such as these, the local currency depreciates, and the price of the US dollar, at which imports and exports are pegged, goes up.

There are also several exchange rates: the official one, which is set by the Central Bank, and a series of parallel ones. Currency controls and a lack of confidence in the economy have widened the gap between the exchange rates.

“It just doesn’t add up,” said Hector Criado, who raises merino sheep and Hereford cows in the windswept fields of the southern province of Chubut.

“It’s like any activity that you have. You will sell it at the moment that you consider to be the right one.” 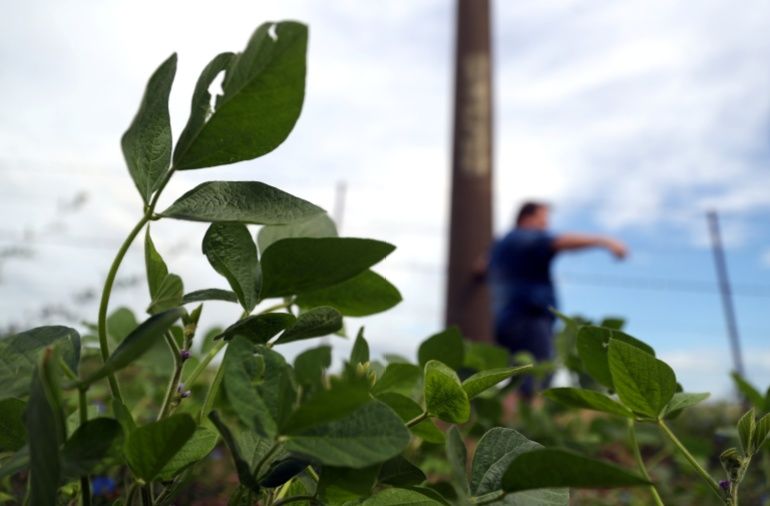 The sale of soy, Argentina’s most important crop, is down so far this year

‘Extorting all of society’

But social organisations that represent the lowest-income earners draw a direct line between the soybeans in silo bags and the poverty that is ravaging the country. Nearly 40 percent of the country lives below the poverty line, according to the latest government statistics, and inflation has eroded the average worker’s purchasing power.

Activist groups organised an open-air soup kitchen outside the National Congress last month to protest against the farming sector’s actions, which they contend are meant to force a currency devaluation.

“In the meantime, we have to put up with currency runs that will only further deteriorate the salaries of working people,” Daniel Menendez, a leader with the social group Somos Barrios de Pie, wrote in an open letter. “It’s not a standoff between the government and farmers. That’s totally divorced from reality. These speculative practices are extorting all of society.”

Devaluing the official currency benefits anyone who exports, said Argentinian economist Martin Kalos, of EpyCa Consultants, because that is the rate at which their exports are paid. But he said there is no guarantee that it will shrink the gap between official and unofficial exchange rates. And it is bound to have other consequences, such as more inflation in the short term.

“It’s not a game in which one person can win without hurting someone else,” he told Al Jazeera.

For Fabian Jauregui Lorda, who is an agricultural machinery dealer and raises cattle in the province of Buenos Aires, this is not about speculation. It is about protection, he says – and it is not new.

“The people who are saving soy in silo bags look like speculators, but the reality is that the agricultural producer sells a large part of their harvest because they have to pay [for] fuel, fertiliser, seeds, and if something is left over, depending on the yield from the harvest, the producer saves it in silo bags because that’s the currency exchange that they have,” he told Al Jazeera.

“The same way someone else buys dollars, the agricultural sector saves its harvest.”

Malfatto expects the harvest to be “thin” this year. In the area of Bragado, he said farmers planted 20 percent less because the price of fuel went up and the supply of fertiliser went down.

Even he admits that the problem is complex and that a devaluation will end up hurting some sectors of society. “If the president sets just one exchange rate, then I and all the producers will sell our harvest tomorrow.”