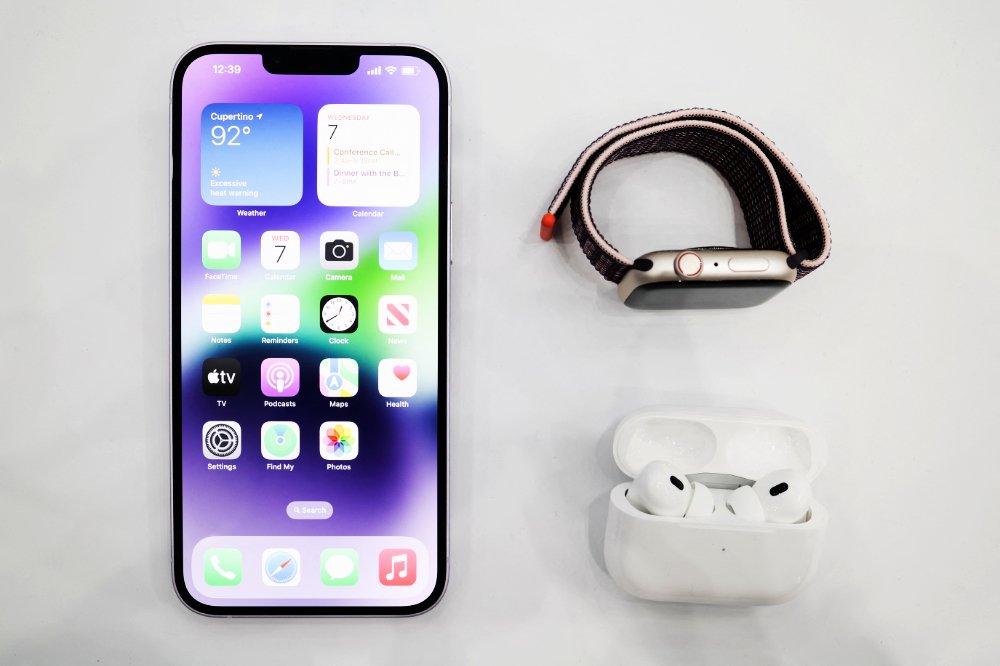 Apple Inc. introduced new iPhone 14 models capable of using satellites to send emergency messages and an adventure-focused Ultra Watch for sports like diving and triathlons.
The outdoor-focused products will test whether Apple’s relatively affluent customer base will keep spending in the face of rising inflation.

Prices of the high-end iPhone 14s are the same as last year’s iPhone 13 models. But Apple dropped its cheapest option, the iPhone mini, meaning the cheapest model now costs $100 more than last year.

“It’s interesting that they decided to essentially maintain pricing despite inflationary pressure,” said D.A. Davidson analyst Tom Forte. “The decision or the strategy is Apple believes that it can sustain margins by discontinuing a lower-priced device in the lineup.”

Apple said its satellite SOS will work with emergency responders. It also said that in some situations, users will be able to use its FindMy app to share their location via satellite when they have no other connectivity.

The service will be free for two years with the iPhone 14. Apple did not say what would happen after that period.

Shares in Globalstar Inc. jumped 20 percent on Wednesday after the satellite services firm announced it will be the satellite operator for Apple’s emergency SOS service.

Apple will pay for 95 percent of the approved capital expenditure for the new satellites that would be needed to support the service, but Globalstar said it will still need to raise additional debt to construct and deploy the satellites.

The stock had gained almost 70 percent from mid-June to Tuesday’s close, following speculation of working with Apple.

Other companies are working on similar functions. SpaceX founder Elon Musk said last month it is working with T-Mobile to use its Starlink satellites to connect phones directly to the Internet.

The Cupertino, California-based company also showed a trio of new Apple Watches, including a new Watch Ultra model aimed at extreme sports and diving and designed to challenge sportswatch specialists such as Garmin and Polar.

“Apple is competing for a consumer segment that already has high loyalty toward their existing products and vendors, and it will need to prove itself over time,” said Runar Bjorhovde, an analyst at Canalys.

The Ultra has a bigger battery to last through events like triathlons and better waterproofing and temperature resistance to operate in outdoor environments, as well as better GPS tracking for sports.

The new Watches include an upgraded budget model called the SE and a Series 8 Watch with crash detection and low-power mode for 36 hours of battery life.

Apple said the new Series 8 watch has a temperature sensor that will work in conjunction with its previously released cycle tracking app to retroactively detect ovulation. The company emphasized the privacy approach of its cycle tracking. Privacy and reproductive health data has become a focus for tech companies in the wake of a US Supreme Court decision that ended a constitutional right to abortion in the United States.

Apple said it does not have the key to decrypt health data such as cycle tracking.

Apple also touted that its second-generation AirPods Pro will double the amount of noise cancelation over the original version.

But while accessories like the Apple Watch have driven incremental sales from Apple’s existing user base, the iPhone remains the bedrock of its business with 52.4 percent of sales in its most recent fiscal year.

Apple’s stock was up 0.8 percent after the presentation, lagging the S&P 500’s gain of 1.8 percent for the session.

Apple did not give any hints or a preview of its mixed-reality headset on Wednesday. The device is expected to have cameras that pass-through view of the outside world to the wearer while overlaying digital objects on the physical world. Analysts do not expect the device to go on sale until next year at the earliest.

A rival headset called Project Cambria is in the works from Meta Platforms Inc, which is spending billions of dollars on the project.
#Elon Musk
Add Comment