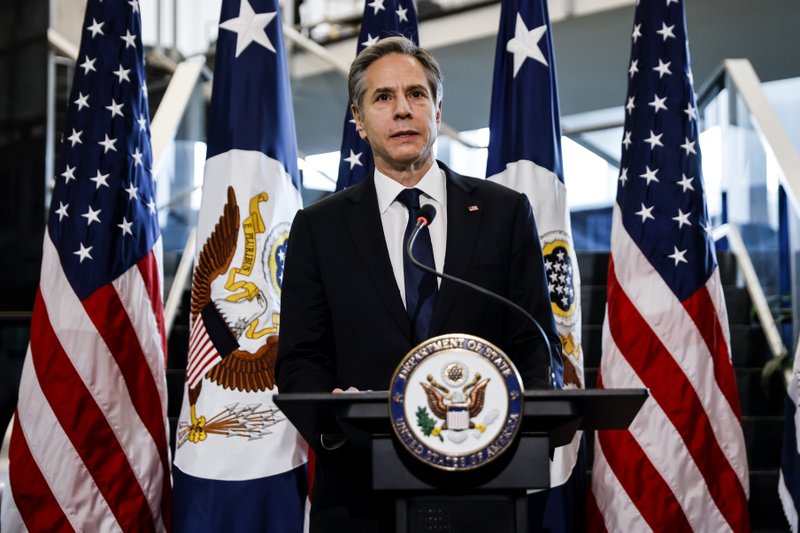 America’s new top diplomat took the helm of the State Department on Wednesday with a vow to rebuild the ranks of the foreign service and rely on its expertise as the Biden administration tries to restore U.S. global standing.
On his first full day in the job, Antony Blinken told a coronavirus-limited audience of employees in the department’s main lobby that he values their work and commitment. He also said that they have a hard road ahead with the world watching how they will pursue foreign policy after four years of former President Donald Trump’s “America First” doctrine.

President Joe Biden has vowed to reverse Trump’s approach, which alienated many traditional U.S. allies. Blinken said that after four years of atrophy the State Department will once again play a leading role in America’s relations with the world.

“The world is watching us intently right now,” Blinken said. “They want to know if we can heal our nation. They want to see whether we will lead with the power of our example and if we will put a premium on diplomacy with our allies and partners to meet the great challenges of our time –- like the pandemic, climate change, the economic crisis, threats to democracies, fights for racial justice and the danger to our security and global stability posed by our rivals and adversaries.”

Blinken, a 58-year-old longtime Biden confidant, was confirmed to be the 71st secretary of state by the Senate on Tuesday in a 78-22 vote. The position is the most senior Cabinet position, with the secretary fourth in the line of presidential succession. A former deputy secretary of state in the Obama administration, Blinken pledged that U.S. leadership is back.

“America’s leadership is needed around the world, and we will provide it, because the world is far more likely to solve problems and meet challenges when the United States is there,” he said. “America at its best still has a greater capacity than any other country on earth to mobilize others for the greater good.”

Shortly after being sworn in late Tuesday, Blinken hit the ground running, making his first series of calls to foreign minister counterparts in neighbors and allied countries: Canada, Mexico, Japan and South Korea.

Blinken inherited a deeply demoralized and depleted career workforce at the State Department. Neither of his two immediate predecessors under Trump, Rex Tillerson or Mike Pompeo, offered strong resistance to repeated attempts to gut the agency. Those were thwarted only by congressional intervention. Blinken said he would promote and protect the foreign service, which had been sidelined during the Trump years.

“The State Department will be central to all this work in the years ahead,” he said. “I know you’re ready. I am, too. We’re in the arena together, and what we do matters. Let’s meet this moment -- our moment -- with joy.”

Blinken also paid tribute to the skill and professionalism of American diplomats, many of whom chafed under the Trump administration’s distrust of the foreign service.

“One of the great attributes of our foreign and civil services through history has been your nonpartisanship,” he said. “You serve Democratic and Republican presidents alike, because you put country over party. All we ask is that you serve the United States, the Constitution and the president to the best of your ability. I know you will.”

Despite promising renewed American leadership and an emphasis on shoring up strained ties with allies in Europe and Asia, Blinken told lawmakers at his confirmation hearing that he agreed with many of Trump’s foreign policy initiatives. He backed the so-called Abraham Accords, which normalized relations between Israel and several Arab states, and a tough stance on China over human rights and its assertiveness in the South China Sea.

He did, however, signal that the Biden administration is interested in bringing Iran back into compliance with the 2015 nuclear deal from which Trump withdrew in 2018.

A graduate of Harvard University and Columbia Law School and a longtime Democratic foreign policy presence, Blinken has aligned himself with numerous former senior national security officials who have called for a major reinvestment in American diplomacy and renewed emphasis on global engagement.
#Donald Trump  #Joe Biden  #Coronavirus
Add Comment