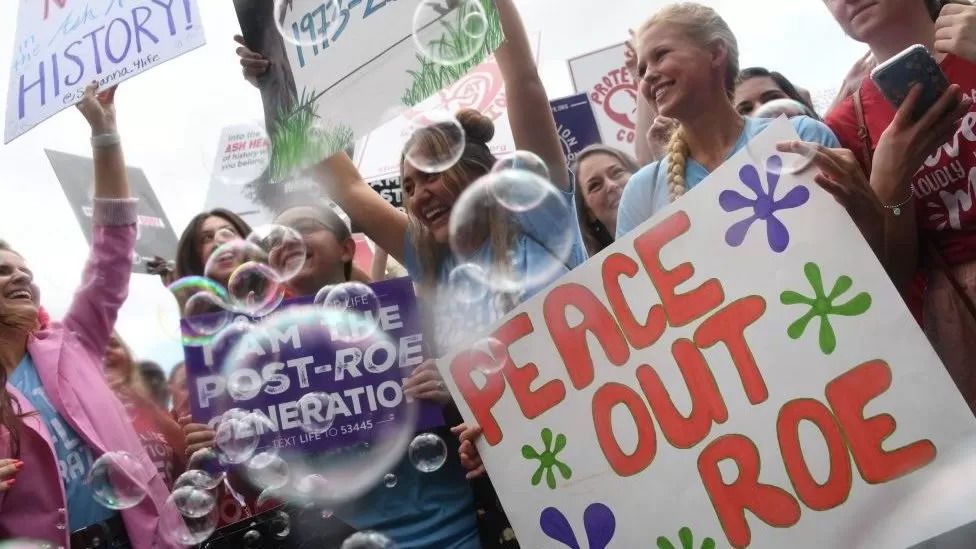 For a new wave of Generation Z anti-abortion activists, the battle to end abortion is as much about social justice as it is about faith.

Noah Slayter estimates he's been to the US Supreme Court almost 50 times in the last five years. The 20-year-old university student, along with his friends, had become something of a fixture on the courthouse steps. Often in matching t-shirts, with placards in hand, they had been united behind one cause: an end to the constitutional right to abortion in the United States.

When the Supreme Court announced it was overturning Roe v Wade, "everyone was hugging [and] I started crying my eyes out," he said, recalling the moment the news came. The ruling returns the decision over abortion rights to individual states.

"Even though it's only the first step, we truly had achieved something. We truly levelled the playing field and made it so that everyone has a voice in this country."

Mr Slayter is a member of Students for Life, a group with more than 120,000 young anti-abortion Americans who are fighting to end the practice once and for all.

Only a quarter of Americans under the age of 30 believe abortion should be illegal in all or most cases, according to a survey by Pew Research Center. Though that view may be in the minority, this vision is becoming reality in several US states.

Now, a "Post-Roe" generation of anti-abortion activists has vowed to keep fighting until the procedure is "not just illegal, but unthinkable" across the country.

As these young activists see it, outlawing abortion in the United States is not just about religion, but also about justice and part of a larger aim to extend equal rights to everyone - including the "pre-born," which is how the movement describes a foetus - not at odds with the broader activism of their generation.

Jess Meeth, who works for the campaign group Democrats for Life, considers herself "whole life" rather than "pro-life" because she supports life "from womb to tomb," she said.

"It really honestly wasn't until the year of 2020 that my eyes were opened," she said, referring to the murder of George Floyd by a police officer that set off a wave of anti-racism protests.

"With all these other social justice issues, I found myself being more left leaning and I realised that they all go hand in hand as, if we as a society respect life before birth, then we will respect life after birth," the 26-year-old said.

Such attitudes could even lead to people re-examining their views on gun violence and racism, she said. 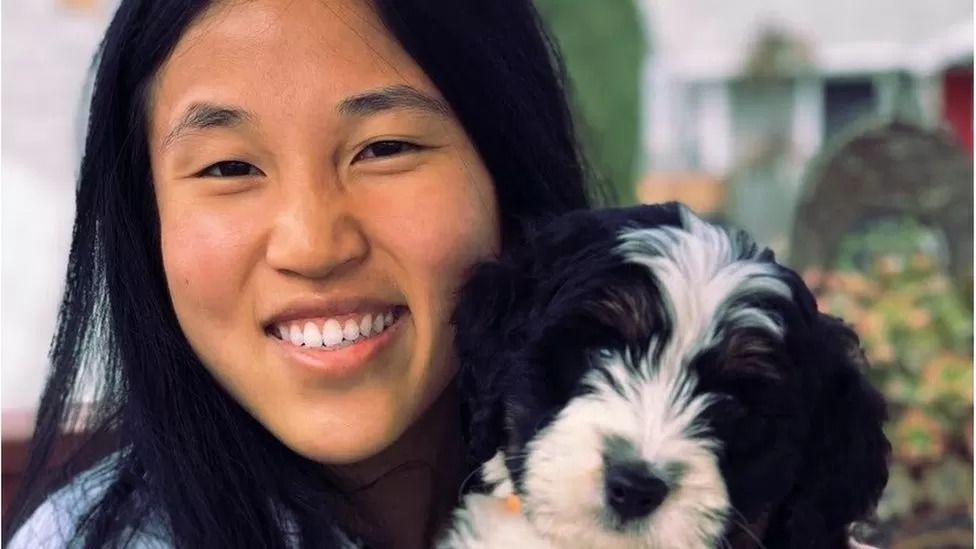 Many young activists in the anti-abortion movement say that even though they do not have children themselves, their worldview has been deeply shaped by their own personal experiences.

Ms Meeth was born in China under the country's one-child policy and adopted at about seven months by a white single mother from Pennsylvania. Her family is not religious, and her mother is pro-choice, but she later attended a Catholic high school.

Mr Slayter said his anti-abortion stance was solidified when his family began fostering and adopting children in need. He encourages other families to do the same, and says he's not swayed by arguments that restricting abortion access could increase the number of children born into poverty or experiencing trauma in the United States.

"I have had all those types of children in my house, sleeping across the hall from me," he said. "There are people who say it is better for them to have died than to live. That really bothers me."

In 2020, more than 407,000 children were in foster care, but just over 58,000 were adopted through a public child welfare agency, according to the Department of Health and Human Services.

Mr Slayter said he's keenly aware that outlawing abortion will require immense change to US social and health care policies to better support parents and families in the United States.

Pro-choice and anti-abortion young Americans often share one thing in common: they both view their movements as a fight for equality and justice. But they disagree on whose rights should matter more.

Victoria Hammett, deputy director of the political group GenZ for Change, said she views abortion as a part of reproductive healthcare and is dedicated to restoring access to the procedure in the United States.

"Fighting for social justice and being 'pro-life' are inherently contradictory because you are forcing people to give up their bodily autonomy," she said.

"I think advocating for the government to be able to force people to possibly die during child labour, or to carry other human beings inside of them against their will is by no means social justice."

Faith Elwonger disagrees. The 25-year-old biology graduate from Texas said she wants to see funding and awareness redirected from pro-choice organisations like Planned Parenthood towards pregnancy resource centres, which aim to help women carry a child to term.

These centres, many of which are religiously affiliated and privately funded through donations, offer people who may be considering abortion free tests, ultrasounds, and counselling. But pro-choice groups accuse them of spreading harmful misinformation about the safety of abortions in order to dissuade women from getting one.

While many pro-choice advocates say abortion bans are especially hurtful to minority women, Ms Elwonger, who is black, said that it's wrong to link racial justice to abortion.

"Abortion is the number one killer of the black community," she said, referring to the fact that black women account for nearly 40% of those getting abortions in America, even though they represent under 12% of women in the US.

Black women are three times more likely to die from pregnancy-related causes than white women, according to the Centers for Disease Control and Prevention, and many pro-choice advocates say they are worried that bans on abortions will negatively impact black women's health. But Ms Elwonger thinks advocating for abortion is not the answer to addressing these health disparities.

Julia DeLuce, who works at a pregnancy centre in Florida, said her support for the anti-abortion community grew after she was raped at aged 16. Anti-abortion advocates helped her seek counselling and press charges against her attacker.

"After surviving being raped, I was able to relate to defenceless humans in the womb as abortion is violence committed by an older, more developed human against a younger one," the 24-year-old said. 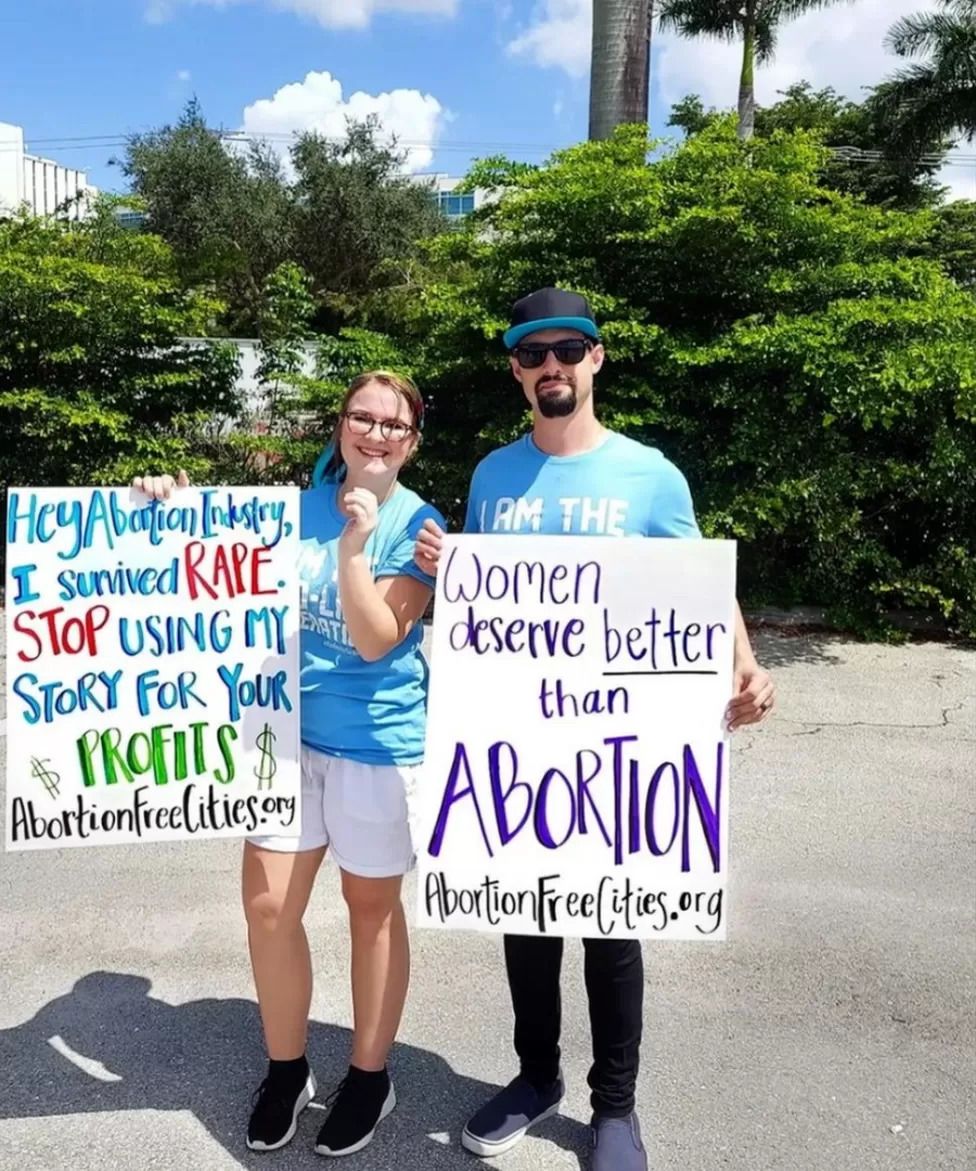 Julia DeLuce holds a sign with her anti-abortion message

Not everyone with ties to the anti-abortion movement stays committed to the cause. Jennifer Martin, a 34-year-old former evangelical Christian, once interned for anti-abortion group in high school and used to think of abortion as "murder". But she quit the movement after re-examining its views on relationships and becoming a mother herself.

"What really helped me change my mind was hearing from a lot of women who had had abortions and also becoming a mom myself, and just realising how complicated pregnancy and motherhood can be," she said.

"To me, as a mom, it would be so much more horrifying to think about somebody having a baby that they don't want to have." 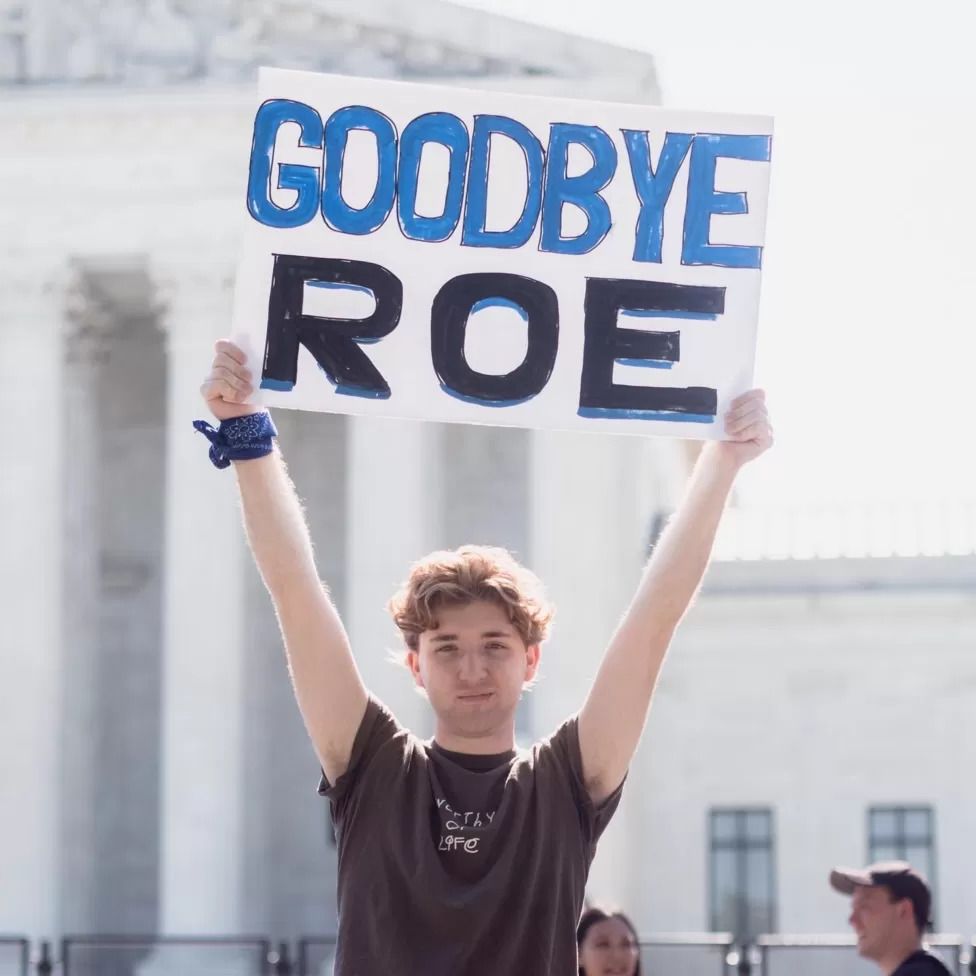 Since the Supreme Court has ruled that there is no constitutional right to abortion, the fight for reproductive choice has moved to the states. Mr Slayter of Students for Life said he is confident his 'Post-Roe' generation will deliver on its promise to prohibit abortion.

"Every person in Gen Z has an understanding of Black Lives Matter, or climate change - all of these movements are for social justice and they're focused on helping people," he said.

"The pro-life movement is just another aspect of that".