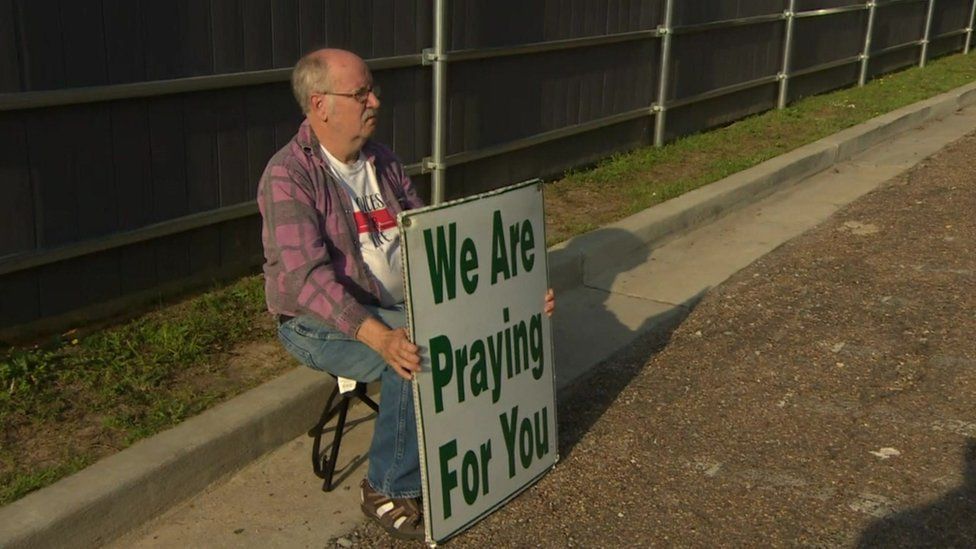 "That was the murderer, that was the abortionist." That's how a doctor arriving at the last abortion clinic in Mississippi was greeted when he arrived for work on Wednesday. 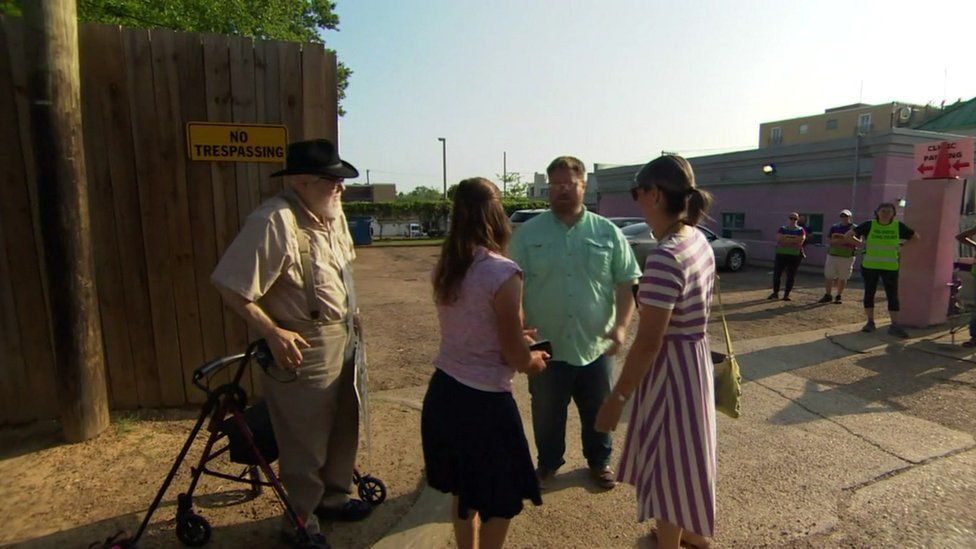 Protesters stand outside the abortion clinic as staff watch on

Angry protests are nothing new outside the Jackson Women's Health Organization, a clinic in a bright pink building that's on the front line of America's battle over abortion.

Some demonstrators follow patients, chant Christian prayers, and call for doctors and volunteers to repent. "Turn to Christ!" and "repent for your sins" shout others.

But events beyond Mississippi this week have transformed the national abortion debate.

The clinic is a defendant in the US Supreme Court case which may overturn the constitutional right to an abortion in the US. A final ruling is not expected until late June or July, but in a draft opinion sensationally leaked on Monday, a majority of the court supported such a move.

That would leave the so-called Pink House with a tough decision to make. Its director Shannon Brewer has said the clinic would probably be forced to close or move.

She told reporters that plans are being made to relocate to New Mexico, where abortion is expected to remain legal even if Roe v Wade - the landmark 1973 ruling that effectively legalised abortion - is struck down.

On Wednesday morning, several clinic volunteers waited by the gates to help those who have come to terminate pregnancies get past the protesters.

Kim Gibson, in her clearly identifiable rainbow jacket, was one of them. "No-one should have to put up with this abuse to take care of themselves," she says.

She believes that evangelical activists will move on to try to stop other things they oppose.

"This is the beginning, not the end. Abortion, contraception, gay marriage - they want to get rid of all these things, they'll tell you that themselves."

The leaked document does not represent the court's final opinion, but the draft written by the conservative Justice Samuel Alito refers to the ruling as "egregiously wrong from the start".

If Roe is indeed overturned, individual states will have the discretion to make their own abortion laws. Thirteen states - including Mississippi - have already passed so-called trigger laws, which would automatically ban abortions if Roe is overruled. More states are expected to follow suit.

Anti-abortion activists here say they will continue their fight until the procedure is banned in all 50 states.

"We'll take the fight elsewhere," says John Busby, who claims he has been outside the Pink House every day since it opened. "In our backyard it might go away, but our work is not finished until Christ comes."