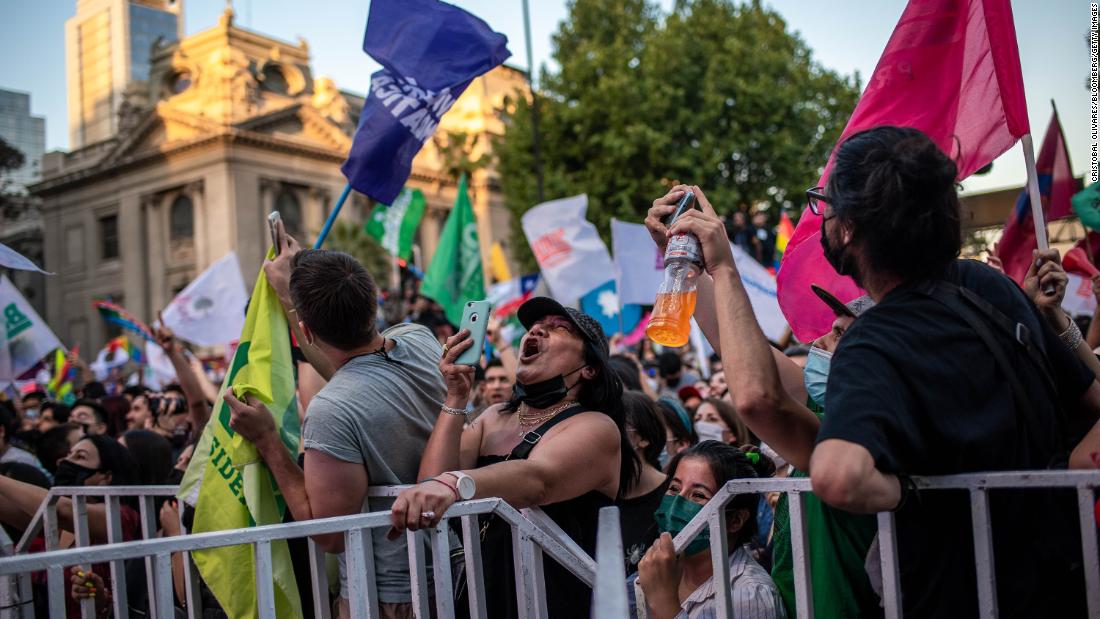 Analysis: Democracy had a tough year in Latin America. But it's not all doom and gloom

If you followed the biggest headlines in Latin America and the Caribbean in 2021, democracy's prospects across the region might have appeared quite grim.

Nicaragua, Cuba and Venezuela sit on the shortlist of nominees for anti-democratic state actors of the year.

In Nicaragua, in elections widely discredited as a sham, President Daniel Ortega secured a fourth consecutive term. In Cuba, a brief -- and rare -- spark of popular protest was brutally crushed in a fashion typical of the island's government. And in Venezuela, President Nicolas Maduro expelled European Union election observers who said there were some irregularities during November's elections.

Outside that notorious triumvirate, a number of runner-ups were also cause for concern.

The populist leaders of Brazil and Mexico are on the opposite ends of the political spectrum, but both have been accused of undermining democratic institutions.

"There is a threat of contagion, of diffusion, of these authoritarian trends," David Altman, a professor of political science at the Catholic University of Chile, told CNN. "It's a profound concern."

Only 43% of respondents across 22 countries in Latin America and the Caribbean were "satisfied" or "very satisfied" with how democracy was working in their country, according to the Latin America Public Opinion Project (LAPOP) at Vanderbilt University's 2021 Pulse of Democracy Survey.

Authoritarianism on the rise

Spontaneous protests in Cuba that ignited in July over a lack of food and medicine amid an economic crisis aggravated by the Covid-19 pandemic and US sanctions were met with an overwhelming crackdown from Cuban authorities.

Follow-up protests, set for November, were preemptively squashed, with authorities preventing some activists from leaving their homes.

This week, dozens of the July 11 protesters were handed decades-long sentences, according to the US State Department. 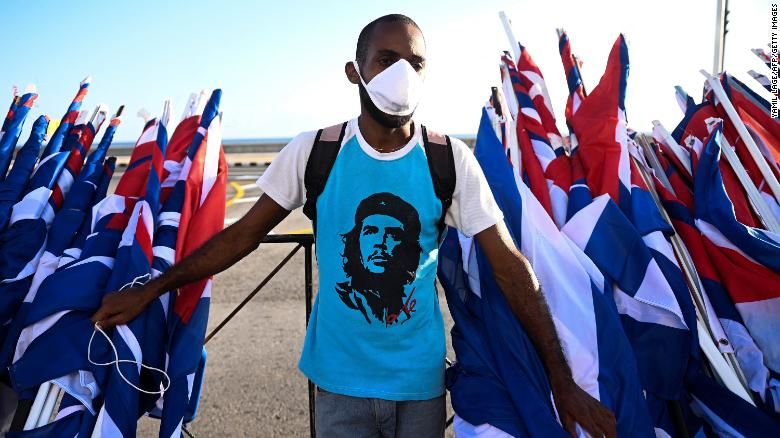 A man is seen with flags during an act of "revolutionary reaffirmation" led by former Cuban President Raul Castro and his successor, Miguel Diaz-Canel, in Havana, on July 17, 2021, six days after protests shook the country.

In Venezuela, Maduro's ruling party claimed victory over 20 of 23 governorships in November's elections, an overwhelming defeat that the opposition said was rigged from the start.

Election observers from the EU said the elections were held under better conditions than previous rounds, however, they refused to call the elections free or fair, citing irregularities including how certain candidates were arbitrarily banned from running, other parties' unequal access to media, and how the government monitored state workers' votes.

Maduro expelled them from the country and called them "spies" who were freely wandering the country "spying on the... social, economic and political life." 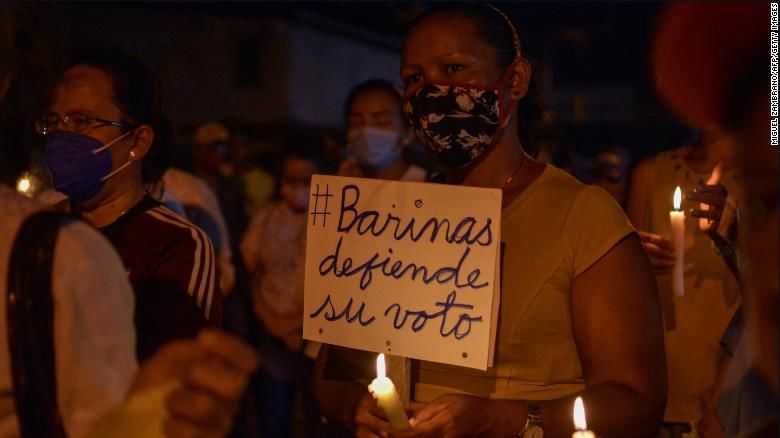 A woman holds a poster reading "Barinas defends its vote" during a demonstration in the city of Barinas, Venezuela, on November 28, 2021.

But the region's most stunning democratic collapse came from Nicaragua.

Ortega's regime has been trending toward authoritarianism for years; however, few predicted how quickly the country would transform into what many experts now call a true dictatorship.

An intense political crackdown began in June, when dozens of prominent opposition figures were arrested on vague national security charges. Many of those arrested were either candidates or potential candidates in Nicaragua's presidential elections.

One by one, the Ortega regime locked away any credible opposition, paving the way for elections in November that Ortega won by a landslide.

Meanwhile, in Brazil, President Jair Bolsonaro has launched a sustained attack on a number of his country's democratic institutions.

Earlier this year, he reminded many of his country's dark days of military dictatorship, after approving a military parade on the same day that lawmakers were voting on a controversial change to the country's voting laws.

While the law didn't pass, Bolsonaro has since suggested he won't respect next year's election results, first claiming (without evidence) that the country's electronic voting system is vulnerable to fraud.

"From what I see... I will not accept any election results that do not declare me the winner. My mind is made up," Bolsonaro said. 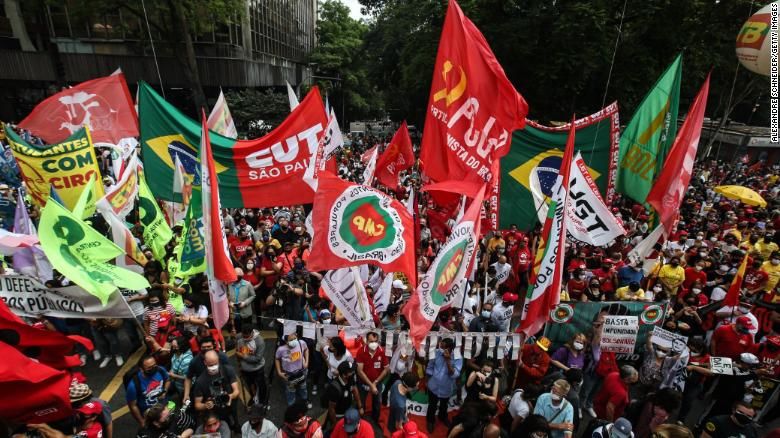 Demonstrators wave banners and flags against Brazilian President Jair Bolsonaro during a protest against his government on October 2, 2021 in Sao Paulo, Brazil.

In Mexico, that populist ethos is all too familiar.

The country calls Mexican President Ándres Manuel López Obrador AMLO for short -- and he encourages it as part of his folksy appeal championing the country's poor. His country's problems are so myriad, his argument goes, that only he can fix them.

To that end, AMLO has undertaken a campaign to undercut many of Mexico's democratic institutions in what some experts say amounts to a power grab in a zero-sum game.

To the south, in El Salvador, the emergence of the self-proclaimed "world's coolest dictator" has rattled many democracy proponents.

Nayib Bukele, the country's millennial president, might have been joking when he described himself that way on his Twitter page, but his attacks on democratic institutions and the opposition have some concerned that he could be Central America's next strongman.

"The speed... that's what really caught us all by surprise," Ryan Berg, senior fellow at the Center for Strategic and International Studies said. "What took [Nicaraguan President Daniel Ortega] a decade to achieve, with attacks on judicial independence and the packing of Supreme Court and the lifting of presidential term limits, Bukele has achieved that in a year." 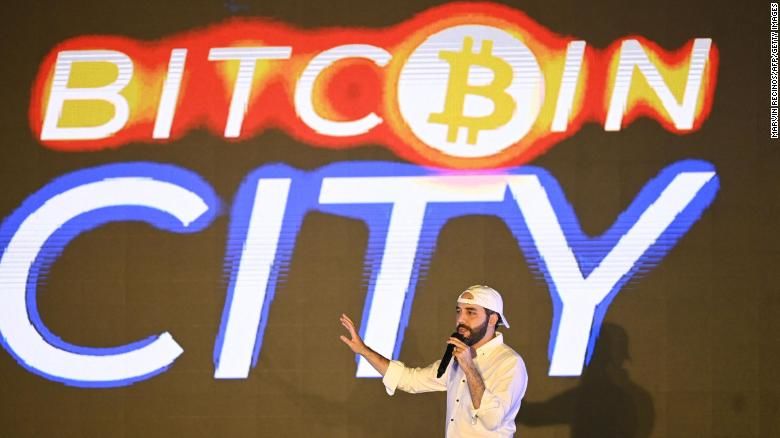 El Salvador's President Nayib Bukele gestures during his speech at the closing ceremony of the Latin Bitcoin conference at Mizata Beach, El Salvador, on November 20, 2021.

But it's not just leaders with an authoritarian bent who aren't big fans of democracy. Plenty of people across the region agree with them.

A survey conducted across 18 countries in Latin America and the Caribbean by Latinobarómetro, a private Chilean NGO, found that just under half (49%) of respondents believed that democracy was the best form of government.

The reason, say experts, is simple. Democracy is not working for the people.

"The governments, the elites... I mean... in Latin America have done a terrible job," said Marta Lagos, Latinobarómetro's director.

Long-term issues of violence, corruption and poverty that have plagued so many countries across the region have in many cases gotten worse during the Covid-19 pandemic, she said. Covid-19 slammed the region in an outsized way -- with many governments failing to keep the situation under control.

"You have public health systems that do not function, you also have until very recently -- a lack of availability of vaccines," Cynthia Arnson, director of the Latin American Program at the Wilson Center told CNN.

"Lockdown after lockdown kept coming as variants keep circulating -- and economic inequality is already very high," Arnson added, noting that all of those factors contributed to a population extremely unhappy with their governments.

The Lationbarómetro survey found that roughly seven in 10 respondents were dissatisfied with how their democracies were functioning.

Vanderbilt's LAPOP survey found similar results, with the report concluding "people's commitment to democracy seems to be waning because they have become disillusioned with elections and with the legitimacy of their elected representatives."

"If you consider (this in) the very short span, (in) the next four years, you might get very worried because things can get worse," said Lagos.

But things might not be nearly as bad as they look, according to the experts CNN spoke to for this article. Heading into 2022, democracy in the region might be better positioned than you might think.

"Where it's bad, it's bad," Berg said. "But I don't want to subscribe to the complete doom and gloom school of thought," he said. 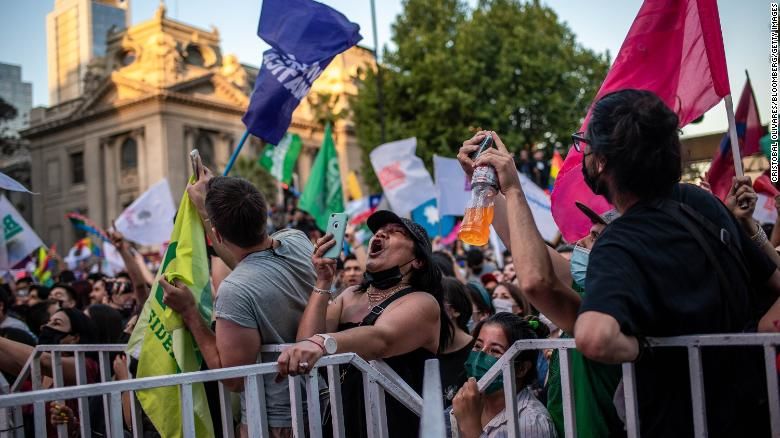 Hope on the horizon

Lagos argues that despite all the hardships that so many democracies have endured, the idea that at least 49% of people still support democracy as a system of government is telling.

"Why is it 49? I mean, it should be zero," she said, nodding to the socio-political and economic difficulties the region has faced.

Other experts agree, saying that they are largely surprised that the pandemic's effects on the region did not dampen public support for democracy, with the numbers in favor of the system largely holding steady year over year in both the LAPOP and Latinobarómetro surveys.

"I think what the polling shows is that people are not willing to throw out democracy per se. But they sure as hell are going to get rid of the bunch in power," said Arnson. 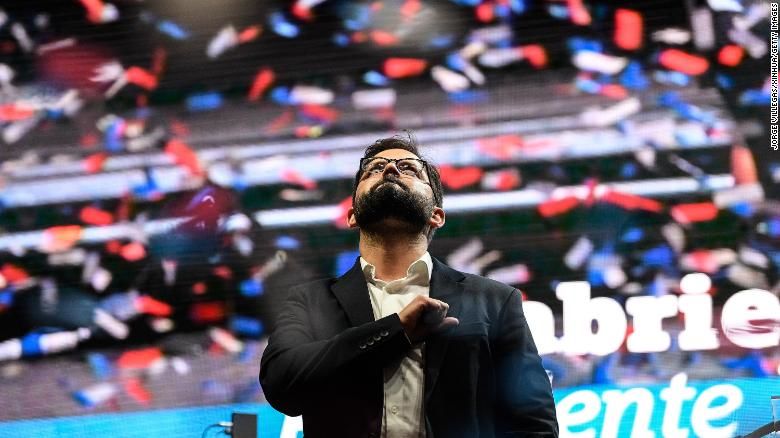 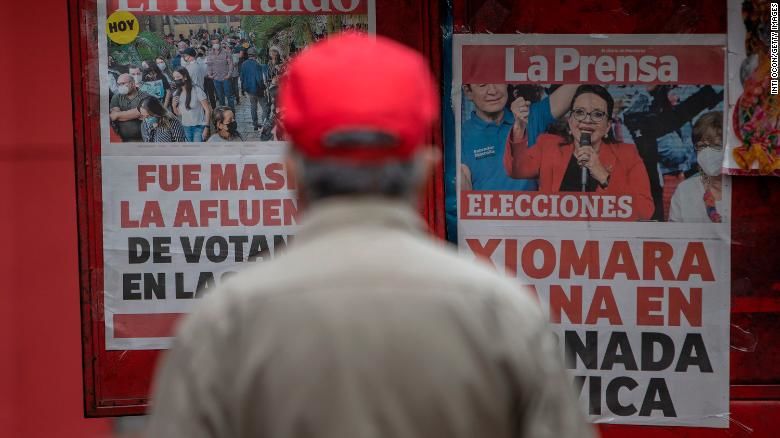 A man reads the covers of local newspapers that announce Xiomara Castro as winner of general elections on November 29, 2021 in Tegucigalpa, Honduras.

Countries like Chile and Honduras are doing just that.

And in Honduras, in November, Xiomara Castro secured a landslide win in the presidential election, celebrating the left's return to power 12 years after her husband was ousted in a coup.

"You see the democratic muscle working, you see that we have some sort of institutional support," said Altman. "I think that we should be optimistic. There are warning signs but at the same time, I think that Latin Americans have learned how to use democratic tools to defend ourselves."