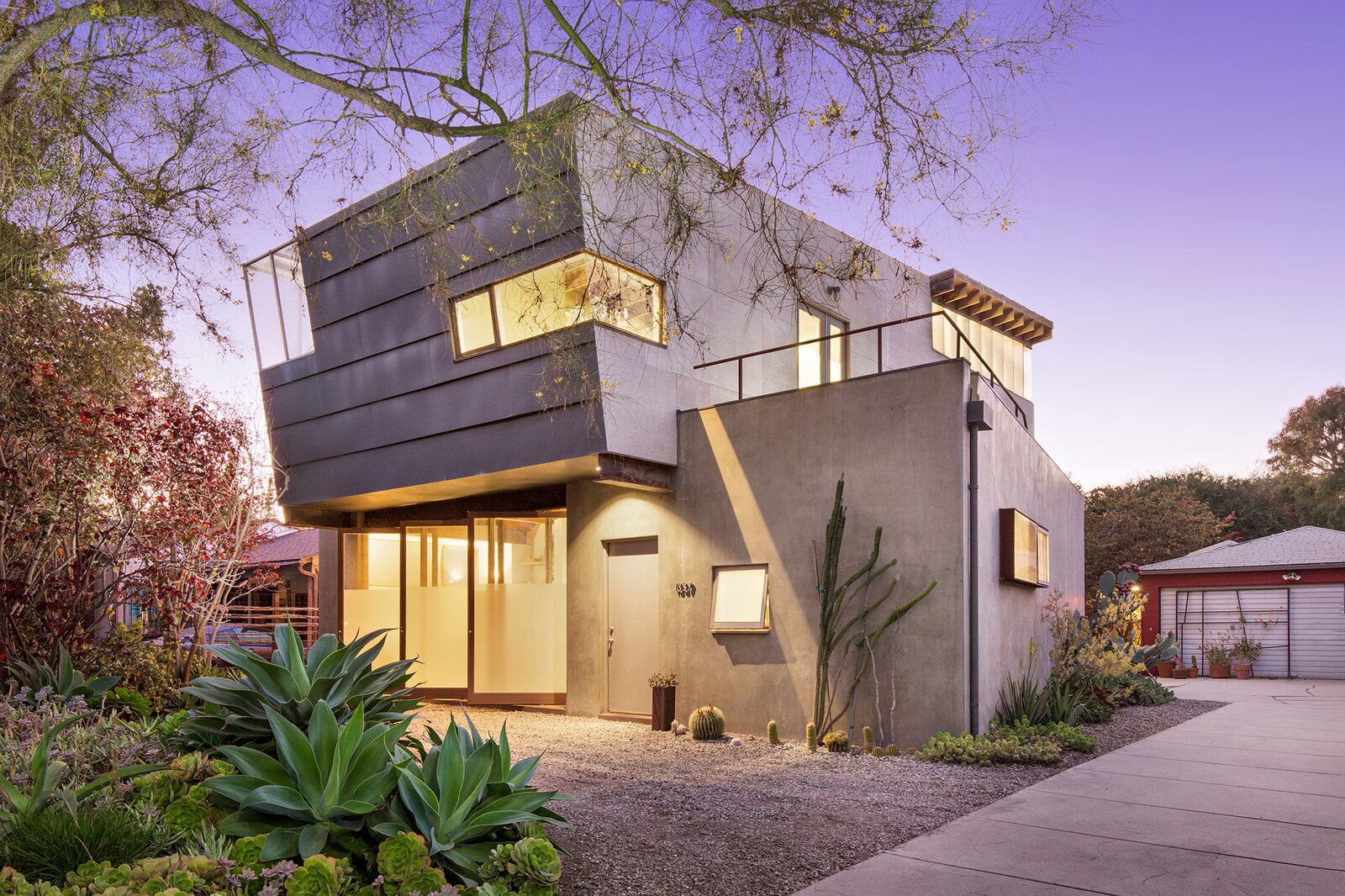 Packed with sustainable technologies, this creative compound consists of a two-level art studio and a one-bedroom house.

A couple commissioned Warren Wagner of W3 Architects to develop one of a series of large lots they owned in Venice, Los Angeles-and the architect was shocked by how much room was left after he laid out plans for a house and a large art studio. So, when the time came to find a lot for himself and his wife, textile artist Blue McRight, Warren knew exactly where to look.

"We got lucky, and we were able to find one of the large lots with a small house in the back," he says. "It was perfect for us, and we made the first offer!" 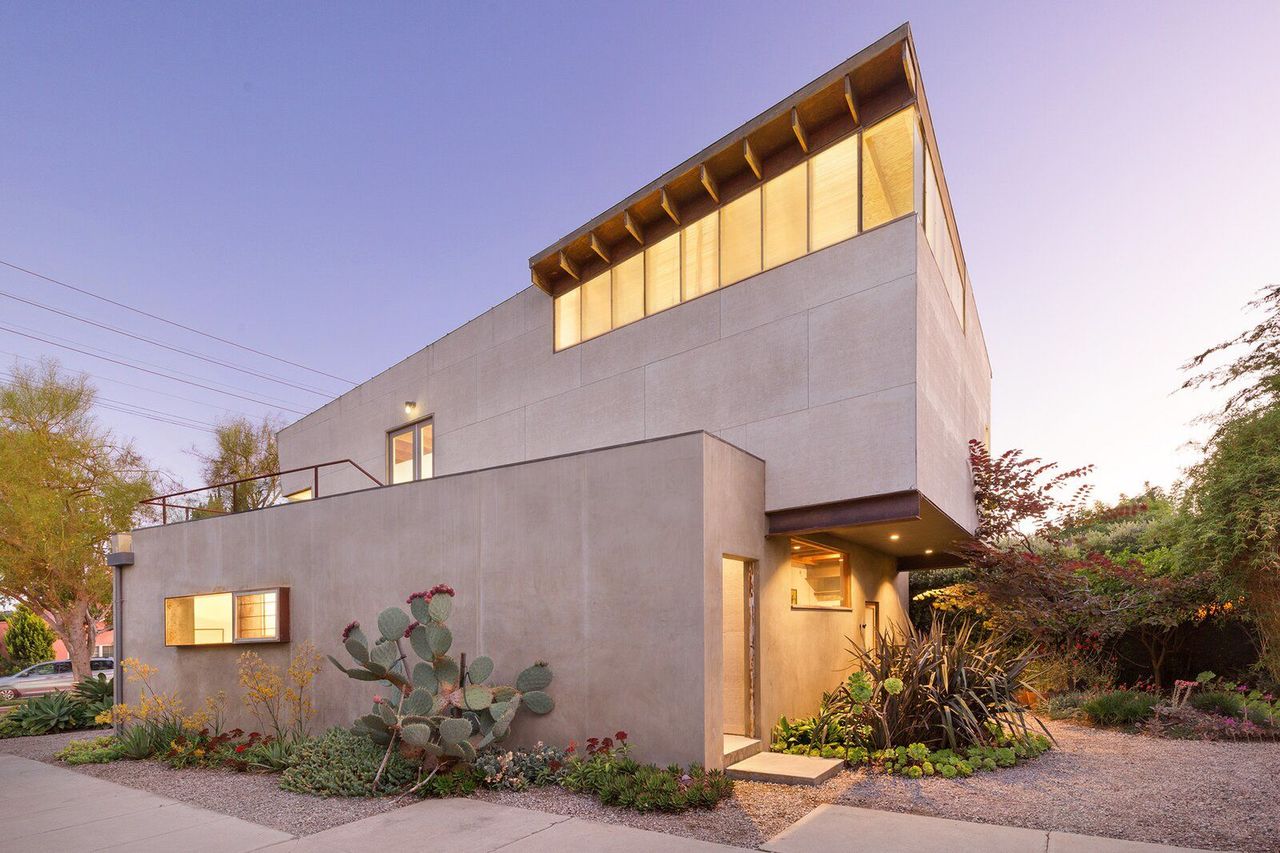 The ground level of the studio consists of a thermally massive eight-inch CMU block, while the second story is developed from a lighter engineered lumber with fiber cement paneling on the facade. 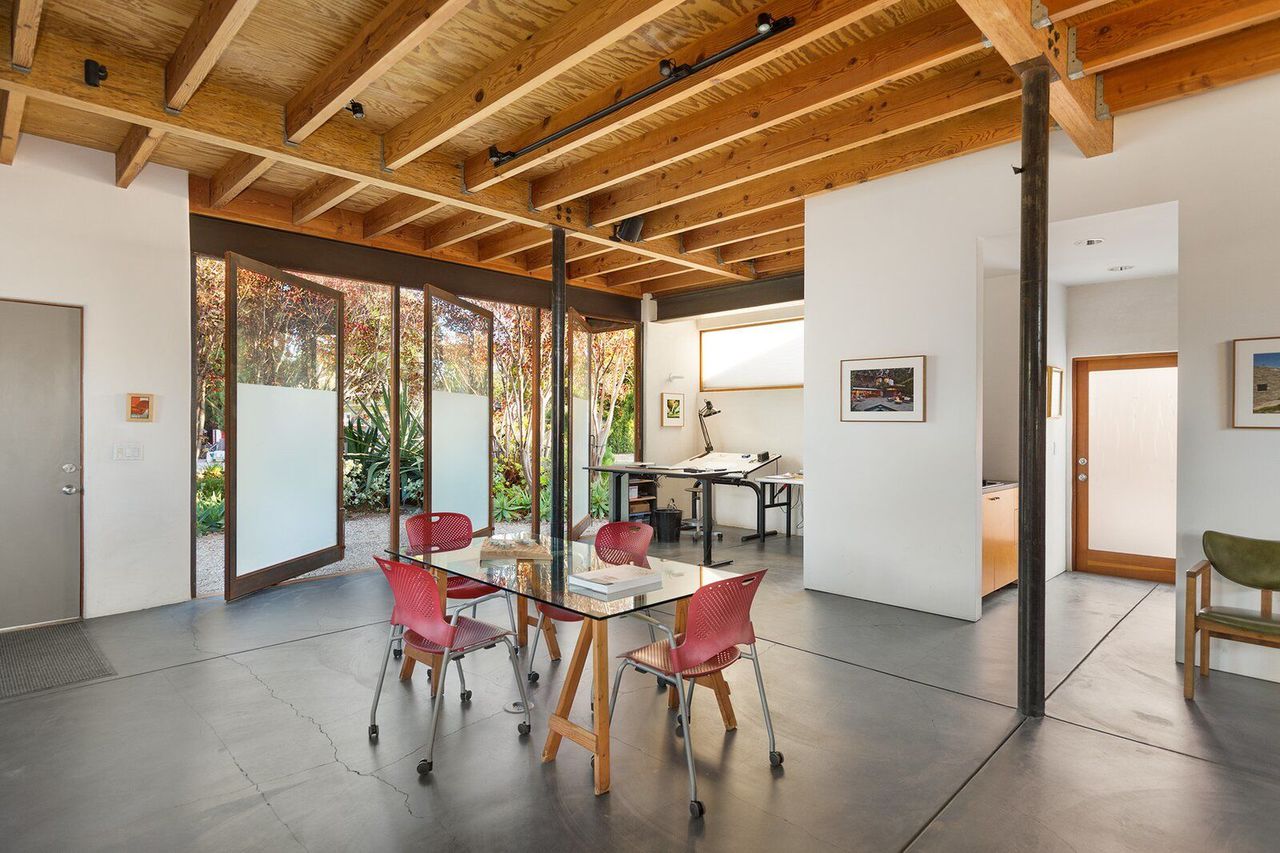 Contemporary flair exudes from the studio, which has thick block walls and polished concrete floors.

They purchased the quarter acre 21 years ago and then set about designing a creative workspace that could accommodate both of their studio needs while they lived in the existing house in the back.

"As an artist-architect team, we both needed to have our individual studios," says Warren. "We could use the existing house as it was, and design and build the studios exactly how we wanted. We are also huge gardeners, so along with studios we wanted to design and develop a large garden." 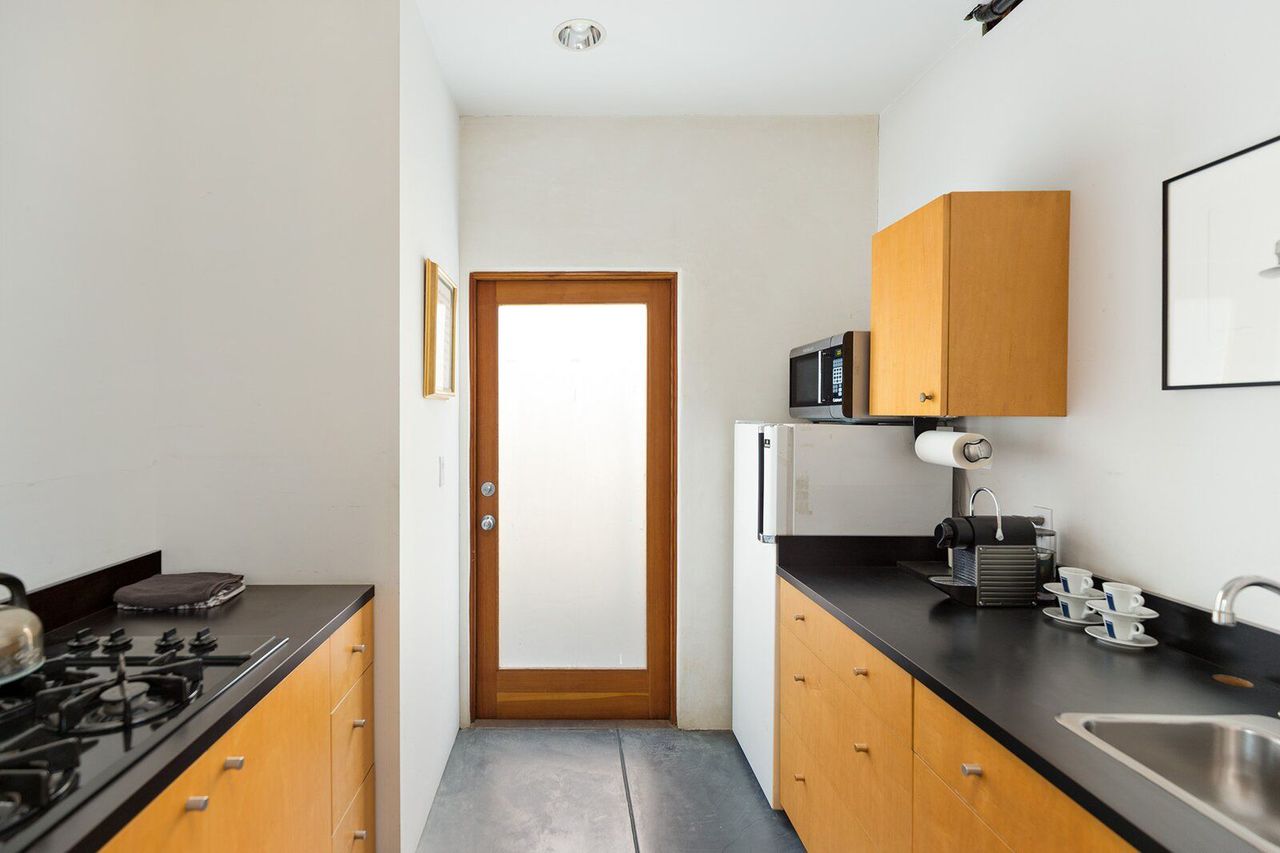 The kitchen has a sleek palette with frameless cabinets. 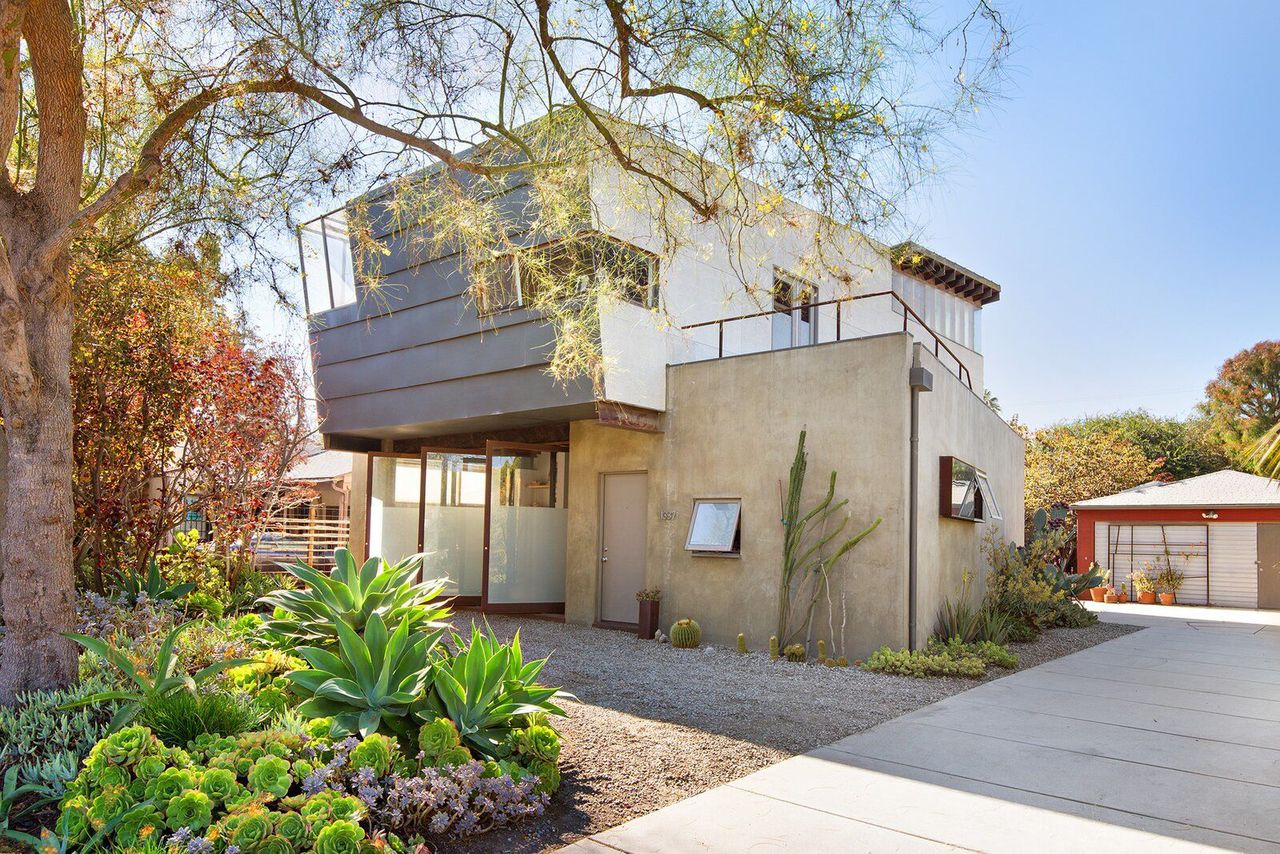 It was important for the studio to be separate from the house, and for Warren and Blue to have their own dedicated workspaces-they each have 1,100 square feet, affording them generous room to display their projects.

"Each of our spaces is quite different," he says. "My architectural office is a horizontal space with controlled daylight for working on both models and drawings, as well as dimmer areas for computers. It is also a showcase for many of the sustainable materials we were experimenting with then, and various custom steel elements." 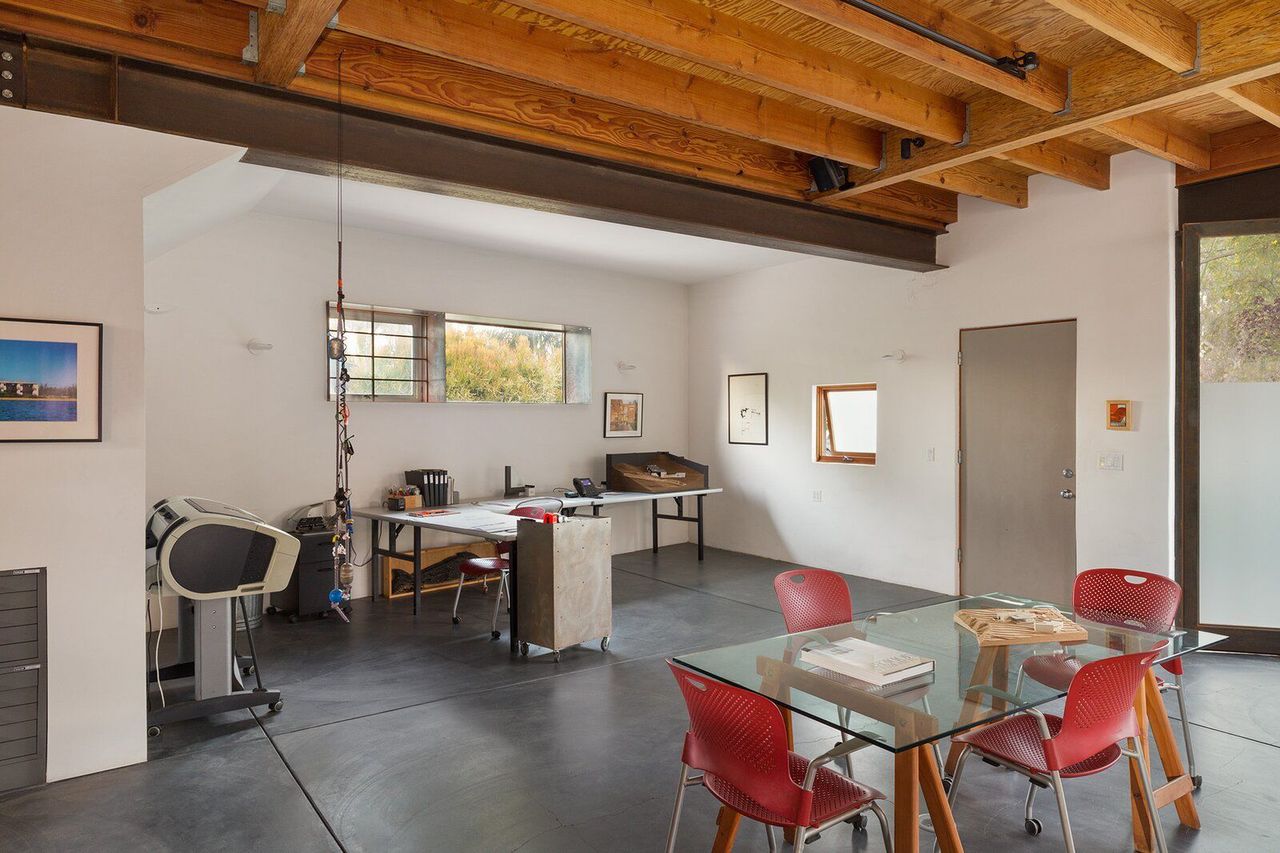 The bottom level of the studio holds Warren’s architecture office, with 1,100 square feet to plan projects. 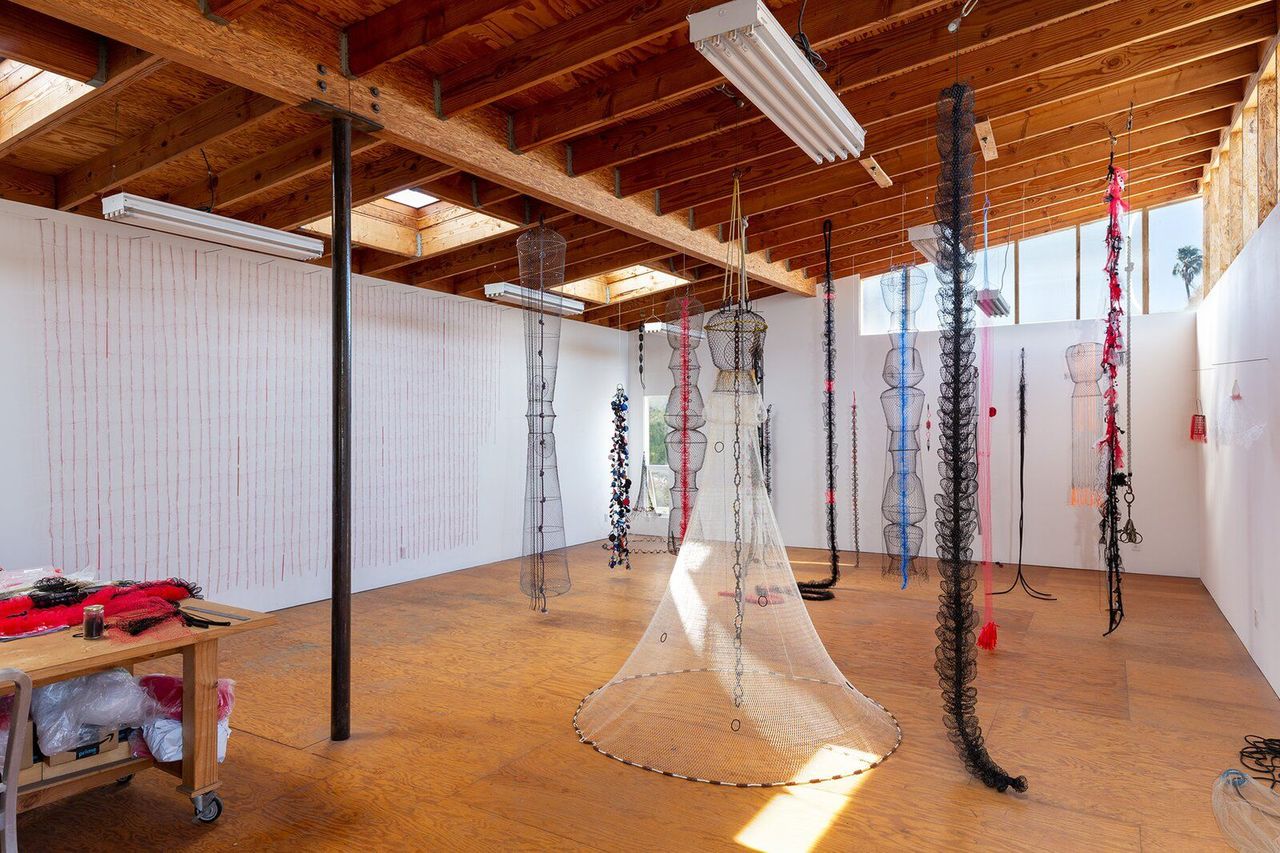 Artist Blue McWright’s works hang from the ceiling in the upper studio.

"Upstairs, Blue’s studio has a twisted roof that rises from 10 to 14 feet, creating a lofty, open, tall space. It has abundant northern light and ventilation from overhead operable skylights and clerestories. It’s perfect for making sculpture and paintings. We can each entertain clients or visitors without disturbing each other."

Sustainability was also top of mind, and the studio’s shape and orientation are informed primarily by passive solar design and performance objectives. Different building materials delineate the top and bottom studios, and the thermally massive building is self-heating and -cooling. 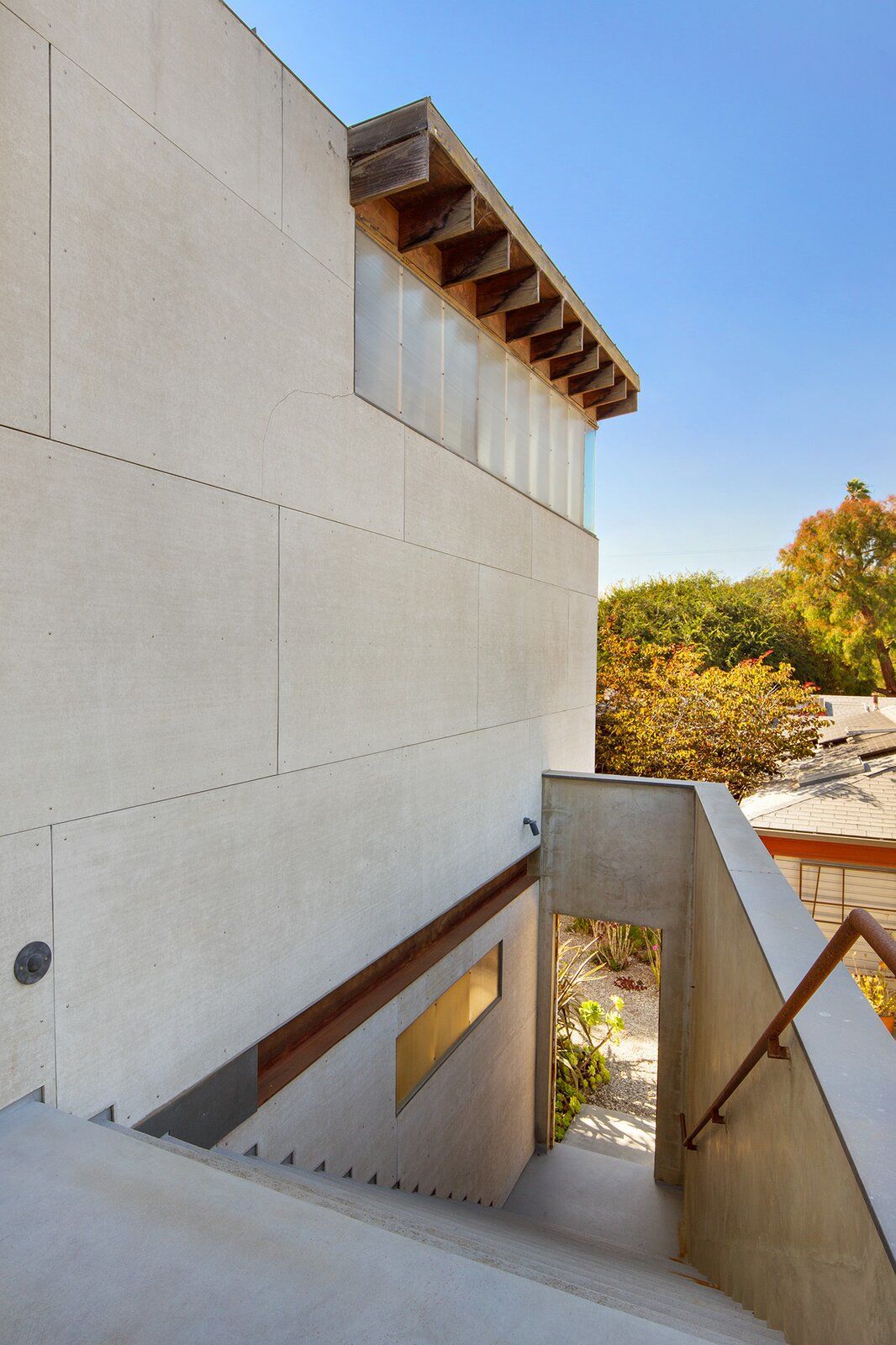 The two levels of the studio are developed from different materials-concrete block and Timberstrand engineered lumber. The sustainable nature of the studio led to the project receiving a citation award from the Los Angeles chapter of the American Institute of Architects in 2003. 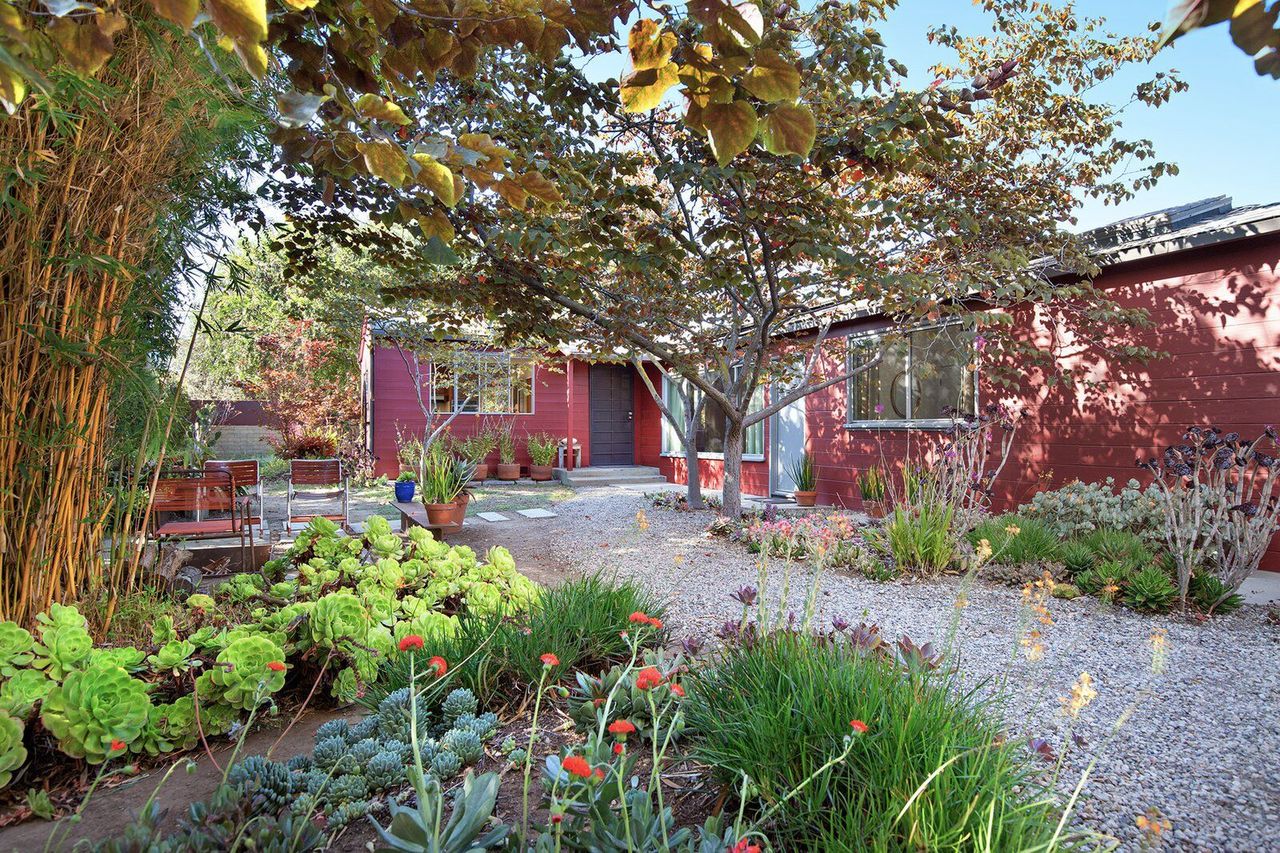 The studio and back house are separated by flora and fauna, as the couple are avid gardeners.

Concrete blocks lend thermal mass to the first floor, while the second floor makes use of lighter material-Timberstrand engineered lumber. The upper facade is covered in cement fiberboard designed to serve as noncombustible roof sheathing for modular housing projects.

"We used it because we wanted to understand how it could be used architecturally," says Warren. "It continues to be one of my favorite exterior materials-no maintenance!" 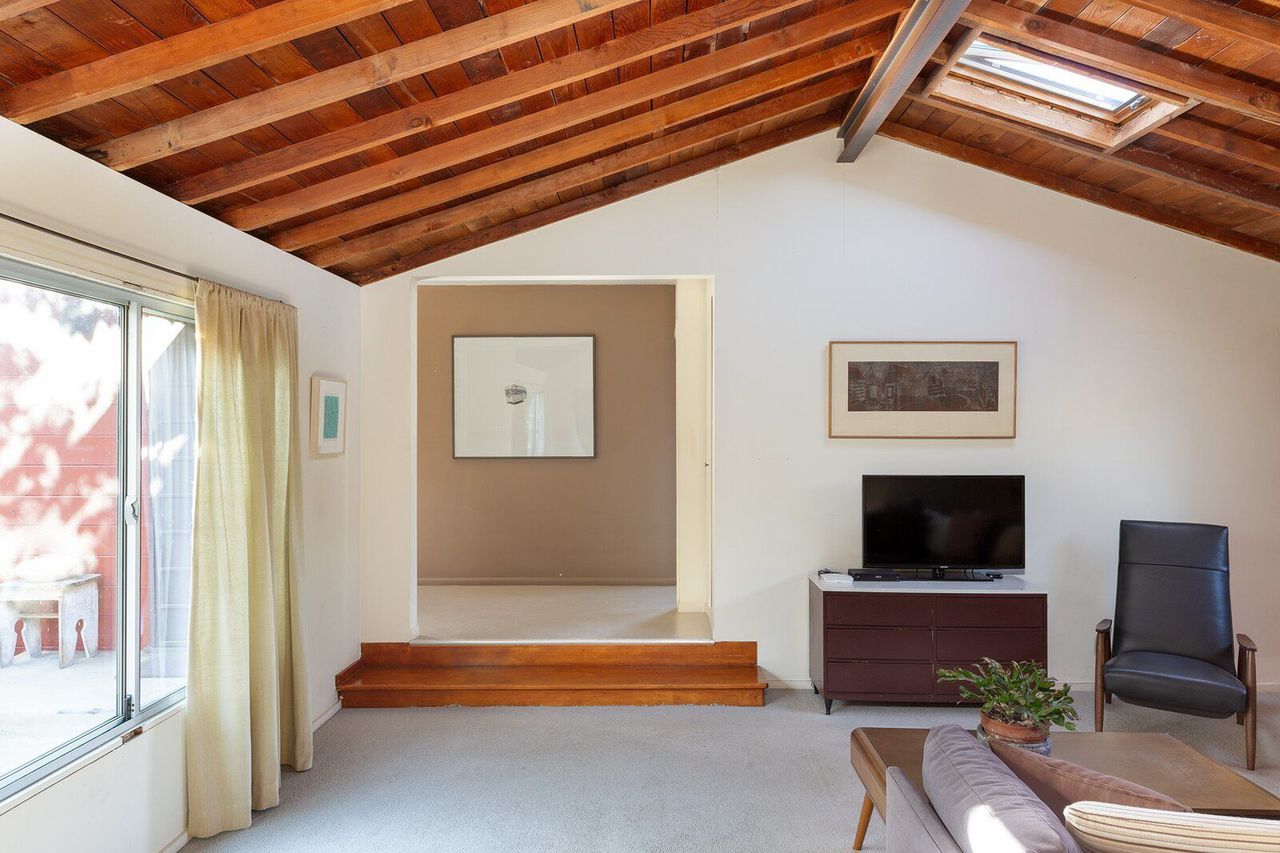 The living area is open and spacious, with a pitched roof and an abundance of natural light. 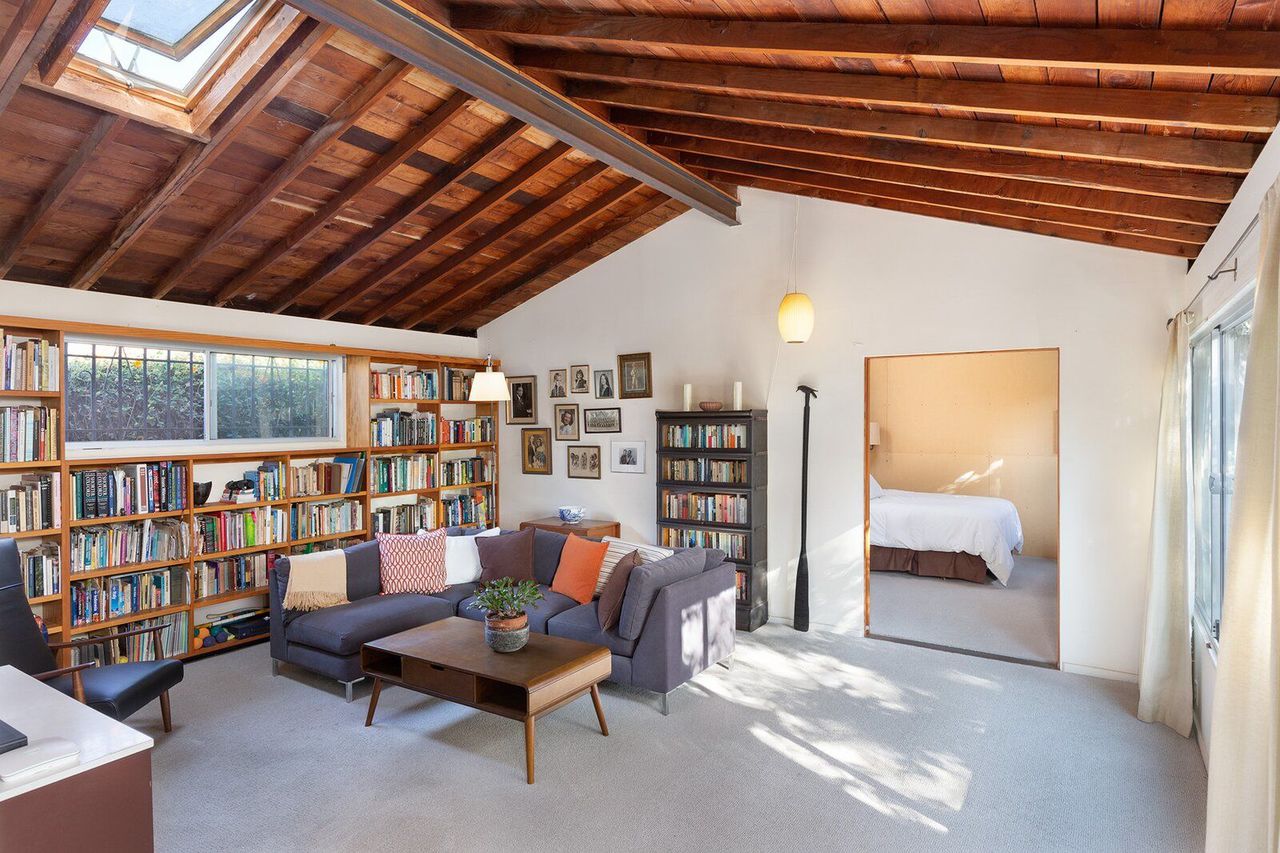 The couple built the studio from the ground up in 2000, and it has received no additions or modifications since then. The project’s range of sustainable building strategies earned it a citation award from the Los Angeles chapter of the American Institute of Architects in 2003. 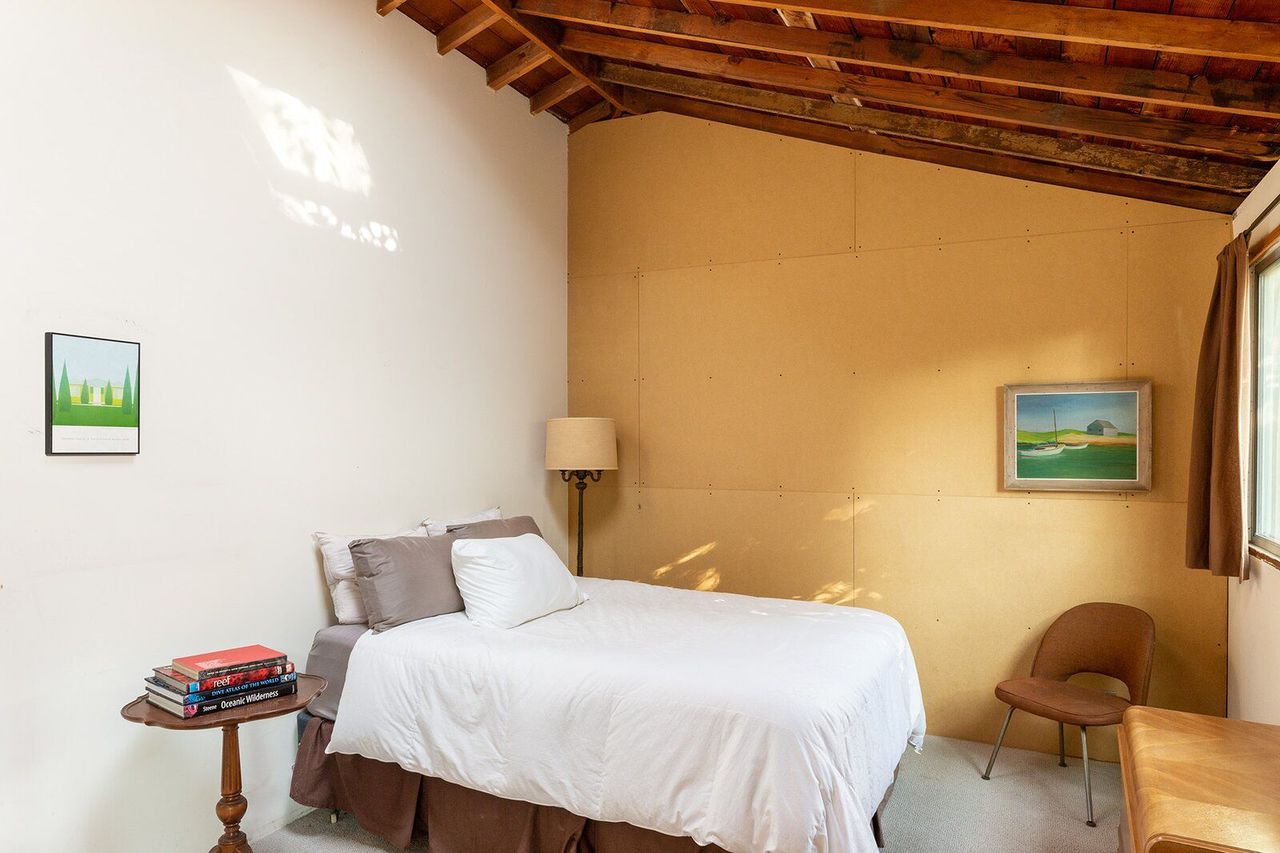 The bungalow, built in 1962, has been opened and expanded with modern accents, like this canary-hued wall under exposed wood framing. 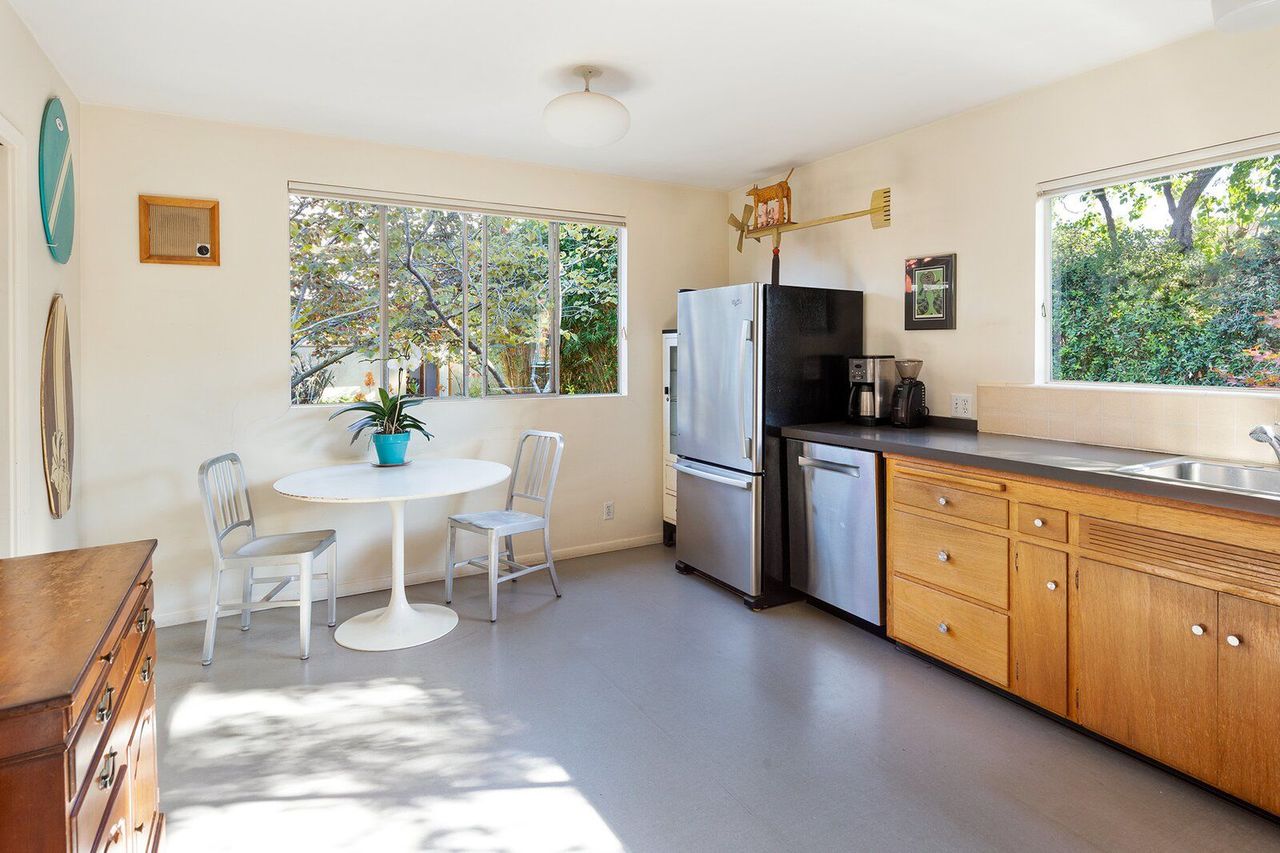 The open kitchen looks out to a verdant landscape.

Connecting the studio and main residence is an outdoor space with a dining area and fire pit. "Currently, the property is powered by a five-kilowatt solar electric system that runs the house, studios, my electric car, and our spa," says Warren. "All the custom steel work was done by talented Sci-Arc guys who were making detailed steelwork for RotO Architects and Morphosis at the time." 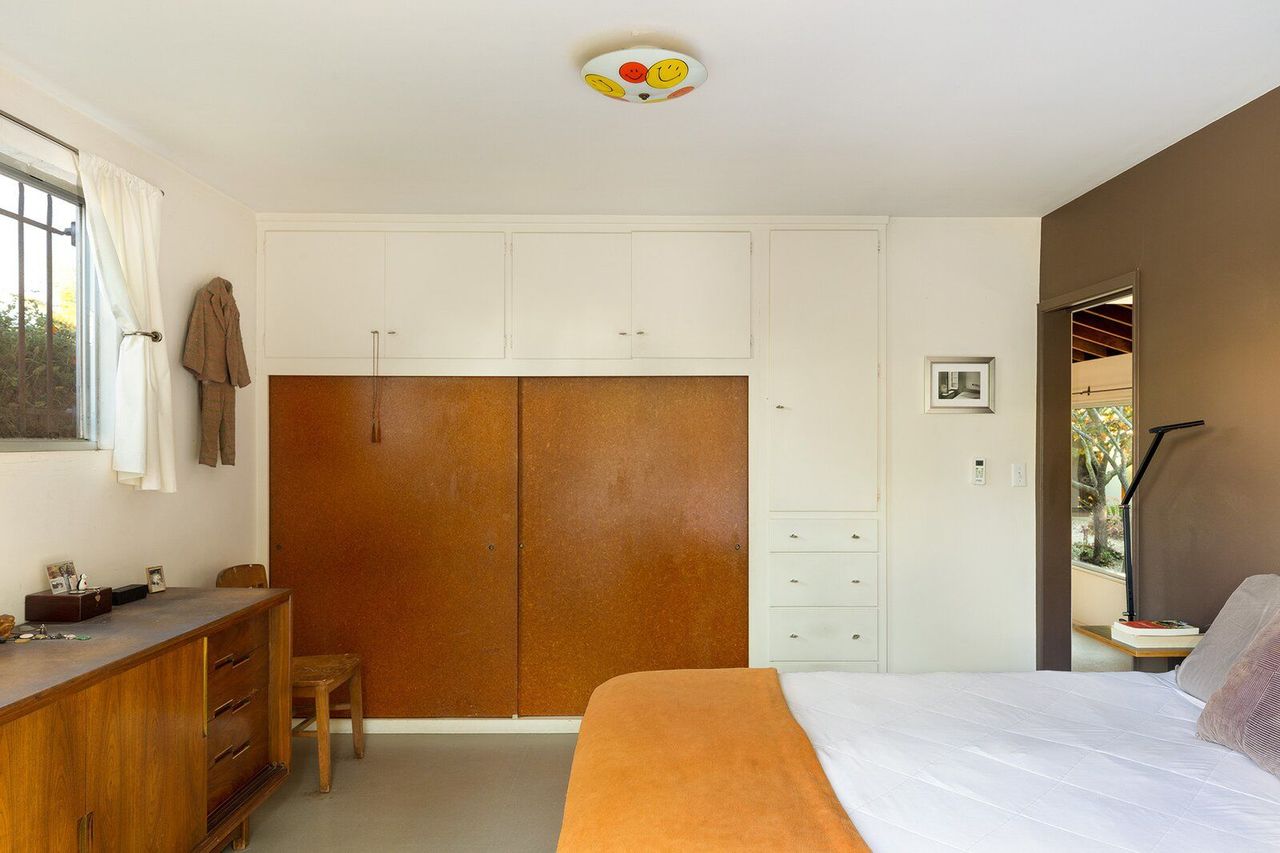 Built-in cabinets in the bedroom provide sleek storage without taking up floor space. 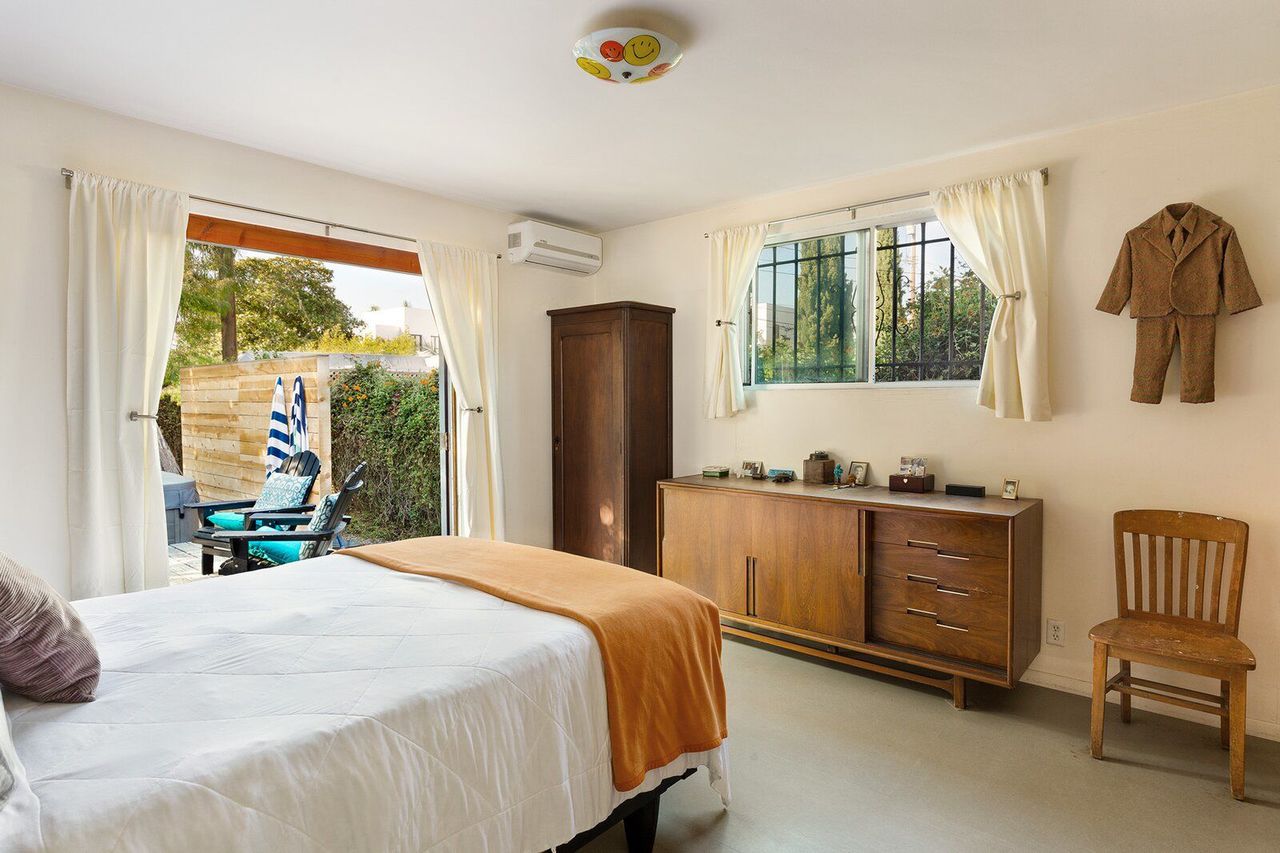 French doors in the bedroom open to a wooden deck with hot tub and a sunny backyard.

The couple also updated the original 1962 bungalow in back by raising the ceilings, exposing the wood framing, and installing large skylights that bring in an abundance of natural light. The one-bedroom home feels much larger than it is thanks to built-in shelving and cabinets, and French doors open to an outdoor deck with a hot tub and yard.

"The existing house and the new studios created a compound and garden environment that facilitated a great live/work lifestyle for us here in Venice," says Warren. "But at this time in our lives and careers, we are wanting a place to live that has easier access to nature. It is time to build the house for the next 20-year phase of our lives." 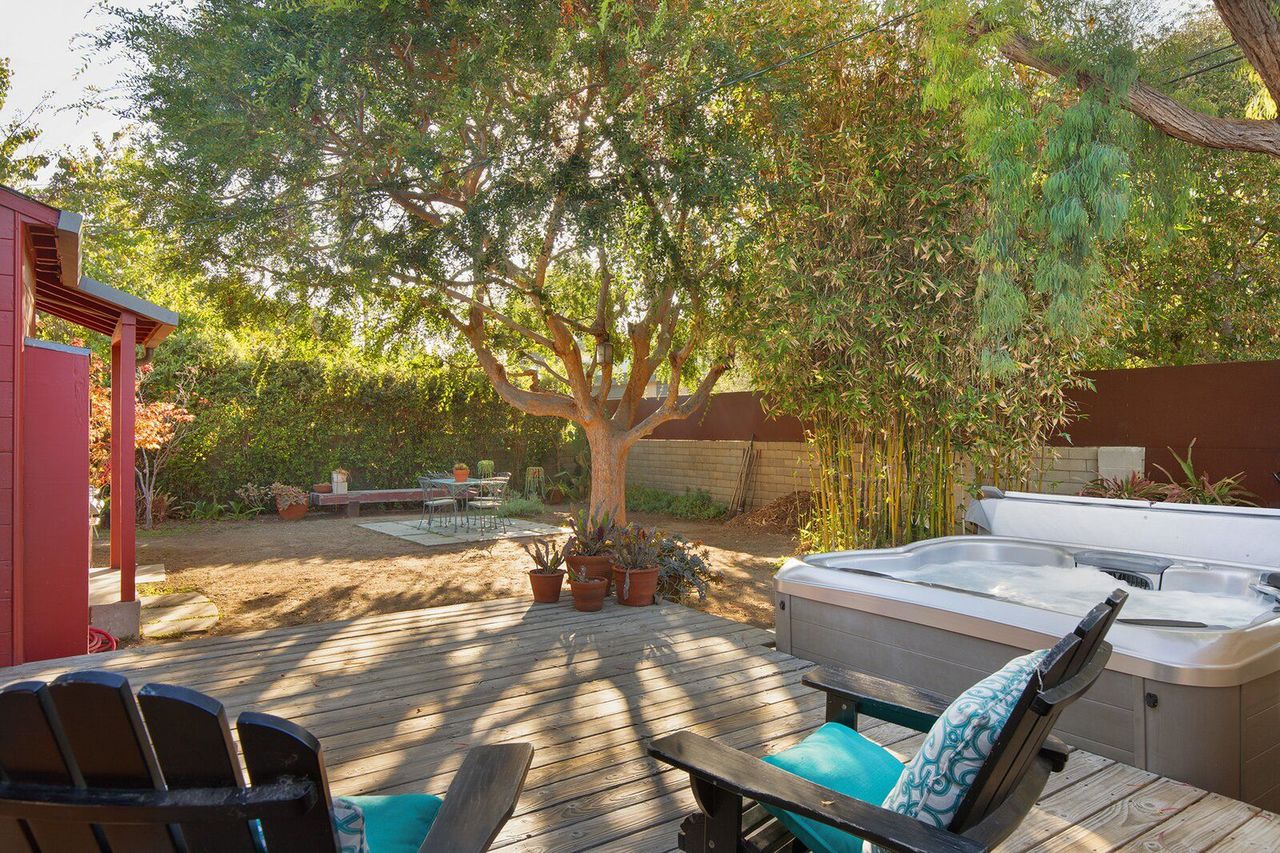 The spa, house, studios, and electric car is powered by a five-kilowatt photovoltaic system.