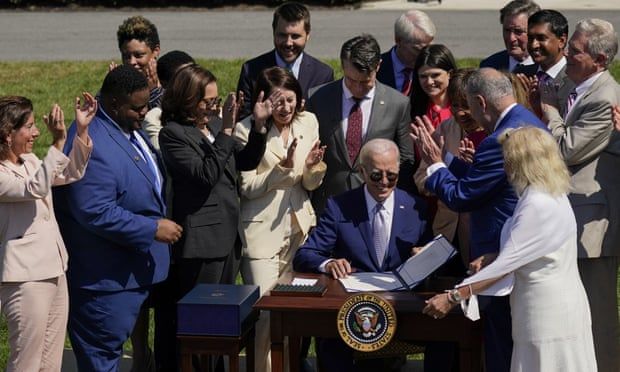 What’s to blame? The change in the balance of power between large corporations and the government

The Clean Air Act of 1970 authorized the government to regulate air pollution.

The Inflation Reduction Act, which Joe Biden signed into law this past week, allocates more than $300bn to energy and climate reform, including $30bn in subsidies for manufacturers of solar panels and wind turbines.

The Inflation Reduction Act is an important step toward slowing or reversing climate the crisis. It also illustrates the nation’s shift away from regulating businesses to subsidizing businesses.

From 1932 through the late 1970s, the government mainly regulated businesses. This was the era of the alphabet soup of regulatory agencies begun under Franklin D Roosevelt (the SEC, ICC, FCC, CAB, and so on) culminating in the EPA of 1970.

The government still regulates businesses, of course, but the biggest thing the federal government now does with businesses is subsidize them.

*  the Chips and Science Act (with $52bn of subsidies to semiconductor firms, plus another $24bn in manufacturing tax credits);

*  the Infrastructure Investment and Jobs Act ($550bn of new spending on railroads, broadband and the electric grid, among other things);

*  and now the Inflation Reduction Act (including the subsidies I noted).

This shift from regulation to subsidy has characterized every recent administration.

And Obama spent about $489bn bailing out the financial industry (and, notably, never fully restored financial regulations that previous administrations had repealed), as well as GM and Chrysler.

Before the 1980s, the US would have done all this differently. Instead of subsidizing broadband, semiconductors, energy companies, vaccine manufacturers, health care and pharmaceutical businesses, and the financial sector, we would have regulated them – requiring them to act in various ways.

If this regulatory alternative seems far-fetched today, that’s because of how far we’ve come from the regulatory state of the 1930s to the 1970s, to the subsidy state beginning in the 1980s.

Why the big shift? Because of the change in the balance of power between large corporations and the government.

Today it’s politically difficult, if not impossible, for government to demand that corporations (and their shareholders) bear the costs of public goods. Government must bribe them instead.

I saw this first-hand. Bill Clinton’s healthcare plan was blocked by the pharmaceutical and healthcare industries, which would have had to sacrifice some profits.

By contrast, Obama got the Affordable Care Act by paying off these industries – all but guaranteeing them larger profits from a massive inflow of newly subsidized customers.

This tidal wave of corporate money has occurred at the same time large American corporations have globalized, to the point where many are able to play off the United States against other nations – demanding government subsidies in return for creating jobs and doing their cutting-edge research in America.

The new Chips Act shows how powerful and highly profitable semiconductor manufacturers, such as US-based Intel, can extract billions of dollars in a global shakedown for where they’ll make semiconductor chips.

In the 1980s, yours truly was involved in a national debate over “industrial policy”. The question, put simply, was whether the government should subsidize certain industries that generate large social benefits in the form of new technologies.

I argued that the government was already engaged in a hidden industrial policy, disguised, for example, as grants to the aerospace and telecom industries by the Department of Defense and to the pharmaceutical industry by the National Institutes of Health. It would be far better to do industrial policy in the open, so that the public could assess what it was paying for and what it was getting in return.

Opponents, which included just about every Republican, were indignant at the very idea that government ought to be “intruding” on their blessed free market.

Today’s subsidies are far larger, and even supported by Republicans.

Republican senator John Cornyn, arguing for the Chips Act, said, “What we are doing is industrial policy unlike people of my free-market background have done before.”

In truth, the three decades-long shift in power to big corporations has transformed industrial policy into a system for bribing them to do the sorts of things government once demanded they do as the price for being part of the American system.