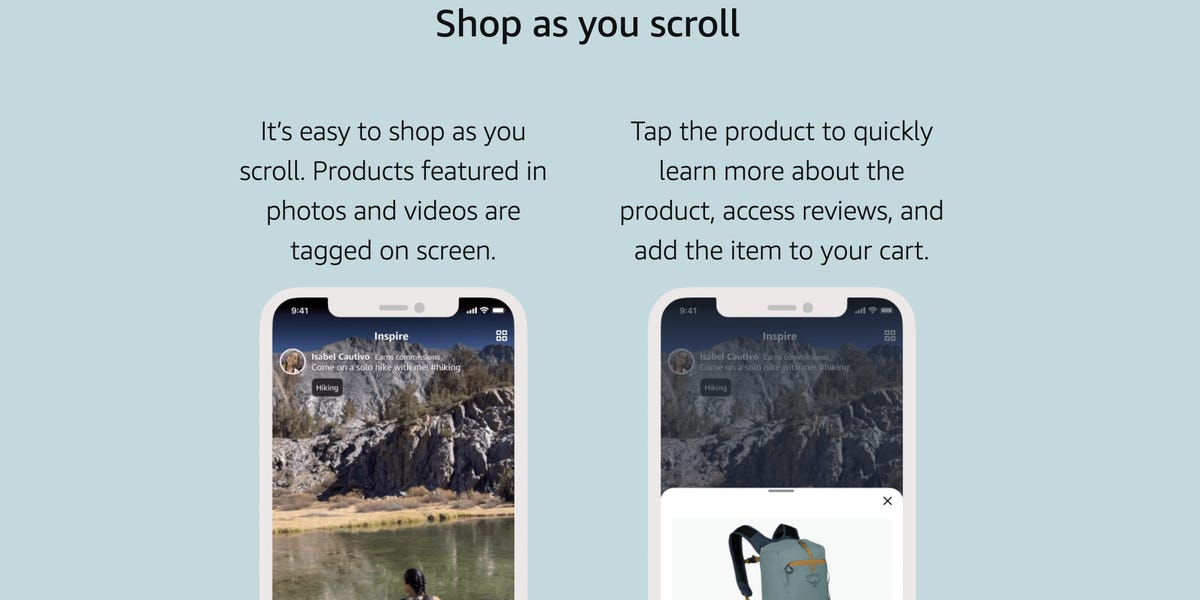 The e-commerce giant announced the new feature, titled Inspire, on Thursday, the Wall Street Journal first reported. An Amazon spokesperson told Insider the social feed is currently being rolled out to select US customers, and will be available to all users in the coming months.

The continuous feed will include short-form videos and photos featuring items available for purchase directly on Amazon. According to the company, Inspire is customized to the user and designed to eliminate the "need to search elsewhere or comment on a post to get more details for products featured online."

"In just a few taps, customers can discover new products or get inspiration on what to buy, all tailored to their interests, and then shop for those items on Amazon," Oliver Messenger, director of Amazon Shopping, said in a statement.

The Amazon spokesperson told Insider that Inspire is just the start of Amazon's venture into social shopping, noting the company plans to roll out "more shoppable features, in-app functionality, and content, building an even more immersive shopping experience for customers."

The move marks Amazon as the latest in a growing list of companies experimenting with social shopping feeds in the hopes of cashing in on the popularity of TikTok's business model. In September, Google announced a slate of new features aimed at young users who rely on TikTok as their preferred search engine.

When Meta's Instagram launched Reels in 2020, it was viewed as a copy of TikTok's video-sharing format. In July, Meta made changes to make Facebook and Instagram even more like TikTok by converting more short-form videos into Reels.

Over 33 billion TikTok videos include the #Amazonfinds tag, as users share their reviews, try-ons, and recommendations of products found on Amazon.
The Inspire feature will only be available on the Amazon Shopping app and feature content directly from eligible brands and creators a part of its influencer program, according to its site.
#Facebook
Add Comment