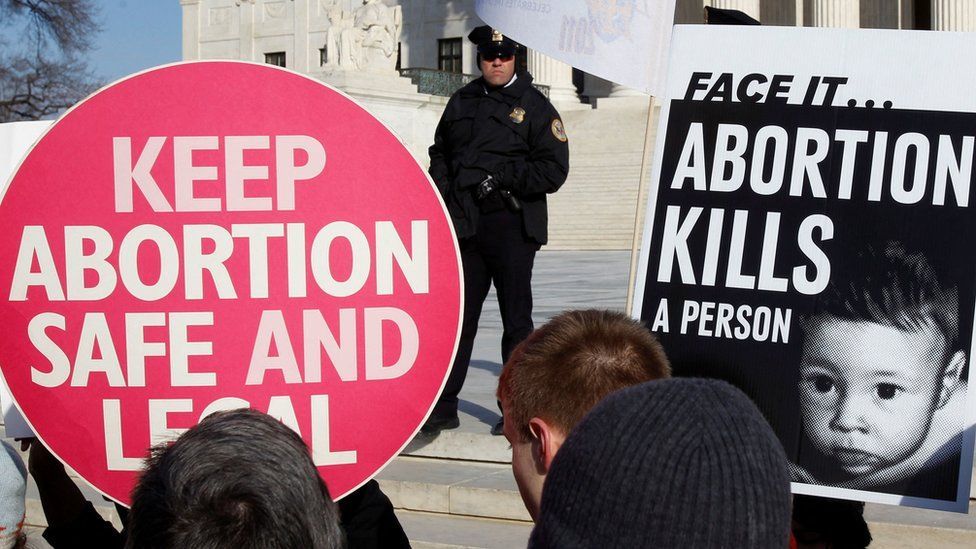 A leaked document suggesting millions of US women could lose the legal right to abortion is genuine, the Supreme Court's chief justice has confirmed.

But it does not represent the court's final decision, said John Roberts.

The leak has stirred expectations that the 1973 decision which legalised abortion in the US could be overturned, allowing individual states to ban it.

President Joe Biden has argued that the decision - if it goes ahead - could call other freedoms into question.

The leaked document - labelled "1st Draft" - appears to reflect the majority opinion of the court.

Written by Justice Samuel Alito, it calls the 1973 Roe v Wade ruling - which legalised abortion across the US - "egregiously wrong from the start".

The draft is not a final ruling, and opinions could change. But if Roe v Wade is overturned, around half of US states could ban abortion.

In a statement, Chief Justice Roberts described the leak of the draft - first published by US website Politico - as "a singular and egregious breach" and asked the Marshal of the Supreme Court to launch an investigation.

The work of the court would "not be affected in any way", he added.

The draft's release has caused a wave of reaction from both sides. Anti-abortion law firm Americans United for Life urged the court to disregard "the expectations of pro-abortion activists or proxy media allies".

Planned Parenthood - the largest provider of reproductive health services in the US - has said it would "continue to fight like hell to protect the right to access safe, legal abortion".

It says its research found that 36 million women could lose abortion access if Roe v Wade were struck down.

The ruling is in the court's sights because Mississippi is asking for it to be overturned, with a final decision expected in late June or early July.

Thirteen states have already passed so-called trigger laws that will automatically ban abortion if Roe is overruled this summer. A number of others would be likely to pass laws quickly.

On Tuesday, Oklahoma's governor signed into law an anti-abortion measure based on one passed in Texas last year. The law allows any private citizen to sue anyone who aids in an abortion after six weeks of gestation - before many women even know they are pregnant.

President Joe Biden warned that such a legal change - if the decision stays the same - would have far-reaching implications.

"It concerns me a great deal that we're going to, after 50 years, decide a woman does not have a right to choose," he said.

"But even more, equally profound is the rationale used. It would mean that every other decision relating to the notion of privacy is thrown into question."

"If it becomes the law, and if what is written remains, it goes far beyond the concern of whether or not there is the right to choose," he said.

BBC North America reporter Anthony Zurcher says the basis for this lies in distinctions drawn by Justice Samuel Alito in the leaked opinion, which he wrote.

Some rights are spelt out in the US Constitution, the judge wrote, while others, such as access to abortion, are mere "unenumerated rights".

Our reporter points out that the same argument could be used in the case of gay marriage, in vitro fertilisation or certain forms of contraception.