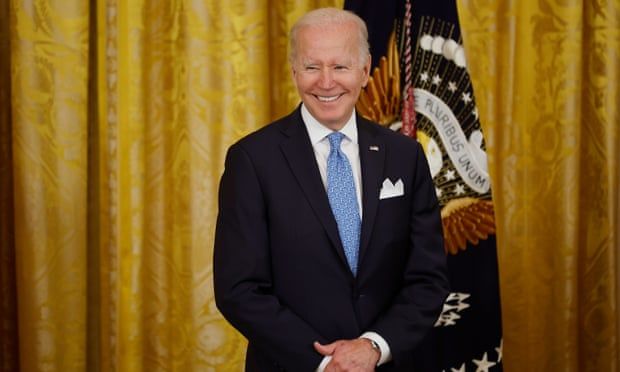 In moments like these, it would be helpful if we had a party with spine to vote for
The Democrats have no plan. On Wednesday, just over a week after Politico published a leaked draft of Justice Samuel Alito’s forthcoming majority opinion in Dobbs v Jackson, which will overrule Roe v Wade next month, the Senate did the only thing they could think to do: they voted on the Women’s Health Protection Act, a bill to codify a federal right to abortion.

The bill had already been brought to a vote this past February – before the leak of the opinion, but long after it became clear that the supreme court would end the abortion right – and it had already failed. On Wednesday, it failed again, by 49 votes to 51, on party lines: only one Democrat, Joe Manchin of West Virginia, sided with the unanimous Republicans in denying women a federally recognized right to make their own decisions for their health and lives. This was no surprise: bringing the act to a vote was a mere symbolic gesture. Democratic women senators and their staff had walked to the floor for the vote chanting “My body, my decision.” But ultimately, they weren’t powerful enough to get it passed. They didn’t have the votes.

What’s next in the Democrats’ fight to preserve abortion rights? Evidently, not much. After the WHPA failed, Vice-President Kamala Harris told ABC News that Americans’ best chance to protect their sovereignty over their own bodies was to vote more, and vote harder. “A priority for all who care about this issue should be to elect pro-choice leaders at the local, the state and the federal level.” It was a shrugging admission of defeat, and the administration has consistently passed the buck. “It will fall on voters to elect pro-choice officials in November,” Biden himself said in a Wednesday statement. The responsibility for securing this essential right, the administration seems to say, lies with voters – not with them.

And here lies a legitimate conundrum for the Democratic leadership: their voters are enraged and scared by the Dobbs opinion, and by the coming end of legal abortion in an estimated 26 to 28 states. But the party leadership insists they cannot intervene, claiming that there is relatively little that can be done to stop, slow or mitigate this coming legal and humanitarian disaster. It is part of the rot of our political system that, like the electoral college, our legislatures have been manipulated by gerrymandering and malapportionment to ensure that Republicans can get fewer votes from the people and yet control more seats in the Capitol – and Democrats must not just win the popular vote, but win it by impossibly large margins to have any power at all. Republican victories are increasingly inevitable, even as the majority of voters move away from the party’s rapid extremism, and Democratic victories are largely toothless even as they become more and more difficult to achieve. This is a real structural obstacle the Democrats face, and one that is incompatible with continuing American democracy. It threatens to enshrine permanent Republican minority rule.

And yet it is more than a little frustrating that the Democratic leadership, who after all do control both Congress and the White House, appear to be so wholly unprepared for the fall of Roe, and even surprised by the Alito opinion. “We will be ready when any ruling is issued,” Biden said in a statement after the opinion became public, perhaps accidentally betraying that he is decidedly not ready now. Reporting from the Washington Post shows the White House in an apparent state of confusion and chaos in the days since the draft leak, scrambling for ways to respond. “The leaked document caught the White House off guard,” the Post reports. Really?

It should not have. The reversal of Roe has been the decades-long, publicly stated, and passionately pursued goal of the Republican right. The conservative legal movement has spent years cultivating young jurists with the express purpose of deploying them to deny reproductive rights. Members of the supreme court have made it abundantly clear that they would consider ending women’s bodily sovereignty to be the pinnacle of their careers.

Feminist and abortion rights activists, not to mention women’s healthcare providers, have been sounding the alarm for just as long, pleading for help from Democratic officials as increasingly draconian and labyrinthine abortion restrictions have made the procedure harder and more expensive to access. At clinics across the country every Saturday for decades, protesters appear to scream at patients and providers alike that they are murderers. These anti-choice zealots have waged a years-long campaign of terrorism, stalking providers, putting photos of patients online and committing arsons, bombings, invasions and assassinations. Abortion has already been illegal after six weeks – and Roe effectively moot – in Texas since September of last year. And yet the White House says it was “caught off guard”? I know some abortion providers who would envy the luxury of that ignorance.

Not only has the problem long been obvious, but so have many of the solutions. For months, human rights activists and legal experts have been pleading with the Biden administration to take aggressive action to protect abortion within its own authority – for while the legislative avenue to codifying women’s rights seems foreclosed, the Democrats still control the expansive authority of the executive branch. Biden could instruct the FDA to loosen its uniquely onerous and medically unnecessary restrictions on abortion medication.

He could lease federal lands and buildings in red states to abortion providers, creating islands of access inside the vast stretches of the American landscape where abortion will soon be illegal. His administration can sue to block state restrictions on abortion medication that are more stringent than the FDA’s rules, citing federal supremacy. They could make a more aggressive push for Congress to end the Hyde Amendment, a budget rider that bans federal funds from covering abortion care. Or they could circumvent it, by paying for women’s transportation to legal-care states.

As abortion becomes not just illegal, but criminal, the administration can direct the Department of Health and Human Services to step in to protect patients from being reported to law enforcement and prosecuted. According to Emma Roth, an attorney with the advocacy group National Advocates for Pregnant Women, the HHS has this authority both under HIPAA’s privacy protections, and under section 1557, a federal regulation preventing sex discrimination in healthcare.

But the administration hasn’t done any of this. They don’t seem interested in trying. Maybe it’s because any move to secure abortion access will be challenged in hostile federal courts – though the possibility of lawsuits has never deterred the anti-choice side. Or maybe it’s because of embarrassment or disdain for abortion within the Democratic party, coupled with their historic unwillingness to prioritize feminist issues. After all, during the primaries, Biden was the only candidate who supported the Hyde Amendment. And while Democratic leaders admonish abortion supporters to vote, they are also backing Henry Cuellar, an anti-choice Texas Democrat, in his primary opposite the young pro-choice progressive Jessica Cisneros. After the draft opinion leaked, the White House had no strategy for abortion rights, but they did find time to scold frightened pro-choice voters who protested in ways that Biden apparently found indecorous. The administration isn’t wrong that those of us who support women’s human rights must vote. But it would be helpful if we had a party with spine to vote for.

Oh ya 44 days ago
10 people killed on a mass shooting and everyone says how terrible it is. 250 babies killed every single day by abortion and nobody says shit about it. Both are bad and both need ro stop, except if your a Democrat as they can never kill enough babies
View all comments (1)Add comment