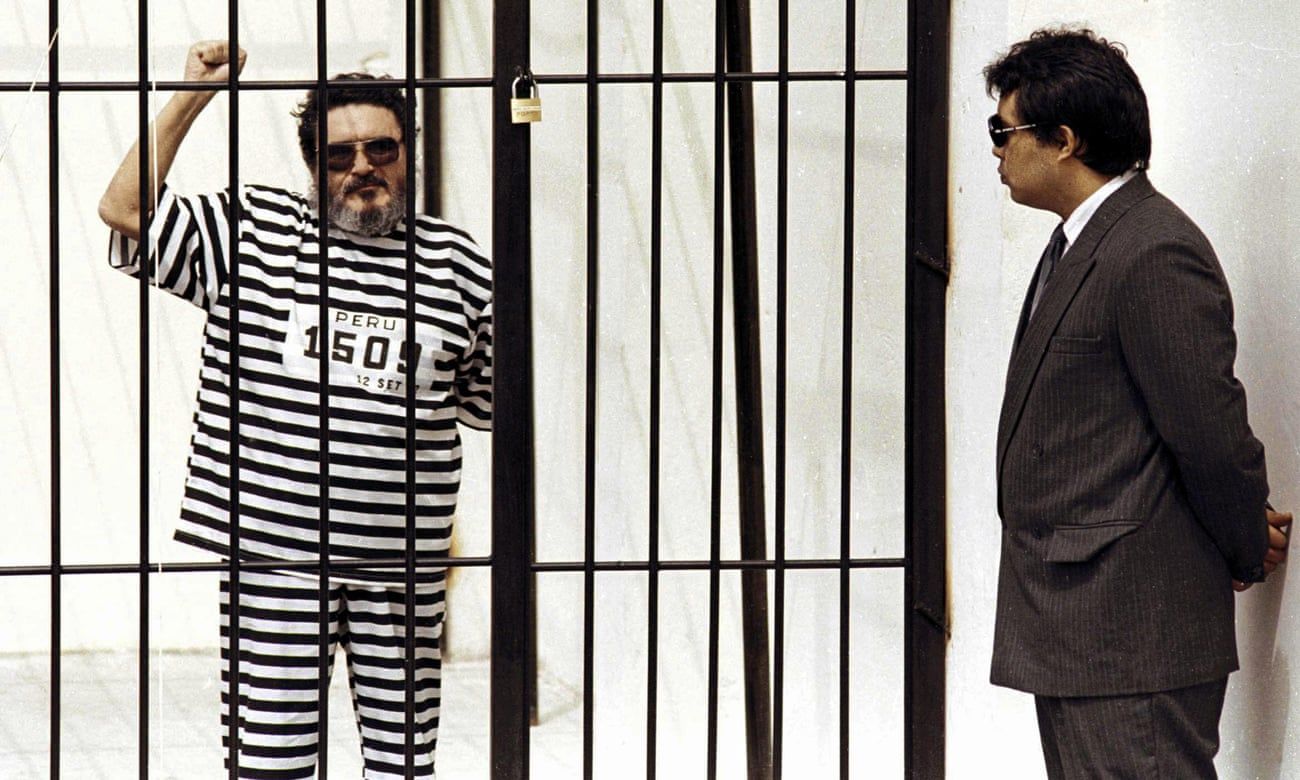 Abimael Guzman, Shining Path’s leader, died a year ago. The terror he unleashed on Peru lives on

The professor-turned-messianic figure’s terror group killed tens of thousands of people in 1980s and 1990s, ripping apart the country’s political and social fabric

A year has passed since Abimael Guzmán, the aging leader of the Shining Path terror group, died in prison, yet the trauma he inflicted on the Andean nation continues to haunt its people and his legacy still poisons Peru’s fraught politics.

The professor-turned-messianic leader, who died aged 86, unleashed an internecine conflict that killed tens of thousands of people in the 1980s and 1990s. Most victims were peasants trapped between fanatical fighters bent on creating a proletarian utopia and the Peruvian armed forces’ brutal counter-attack.

Between 1980 and 2000, nearly 70,000 people were killed in the intense conflict; Guzmán’s followers were responsible for about 54% of the deaths.

Since then, decades have passed, but for many thousands of Peruvians, the wounds are still open and bleeding.

Few, however, witnessed the horror and folly of the conflict as closely as Lurgio Gavilán, who was forcefully enlisted into the Shining Path aged 13, only to be captured by the military before rejoining the war as a soldier in the Peruvian army.

After a stint with the Catholic Franciscan Order, he is now neither a soldier nor a monk but an anthropology professor at the university where Guzmán once taught philosophy.

“Here, the people say [Guzmán] died for us a long time ago,” said Gavilán, 48. “Oblivion, being forgotten, is the worst punishment for us. We don’t remember him.”

Gavilán has lived many lives in half a century, but for him, the single most remarkable feat is that he survived to tell the tale. 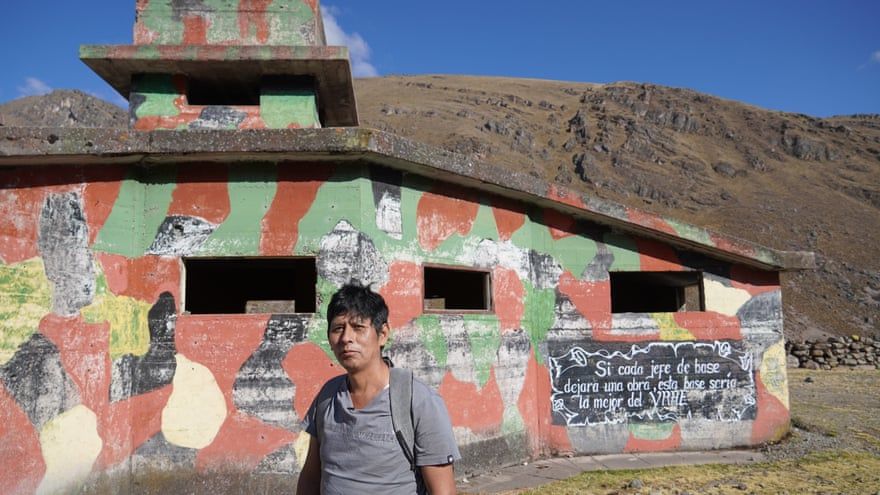 Lurgio Gavilán, 48, revisiting a deserted army base in Razahuillca, near Huanta, Ayacucho, where he was posted as a teenage soldier in the 1980s.

Growing up dirt poor in a mountain village in the Andean Ayacucho region, he remembers first hearing about “social justice” soon after May 1980, when the Shining Path first declared war on the Peruvian state, burning ballot boxes just as Peruvians were celebrating a return to democracy after military rule.

Soon afterwards, however, his elder brother went missing. “Someone told me where he was and I went to look for him. That’s how I came across the Shining Path,” he recalled. There was no way back.

“It wasn’t possible to escape. Every punishment was death. If a compañero wanted to escape they would kill him on the spot, to make an example of him,” he recalls, now narrating with clear-eyed distance. “Even if you managed to escape, the peasant vigilantes would butcher you, or the soldiers would disappear you.”

He soon found there was nothing glorious about Sendero’s struggle. His companions were a rag-tag band, mostly children. “We had some shotguns, and homemade dynamite which we packed into tin cans. We were very poor, we had no change of clothes. We all had fleas.”

To compensate for its lack of strength, Shining Path turned to terror as a strategy of war, slaughtering Quechua-speaking peasants, enslaving youngsters, assassinating officials and forcing thousands to flee. María Ruiz, 68, remembered how the arrival of rebels in rural Chungui district marked the end of her peaceful, happy life. 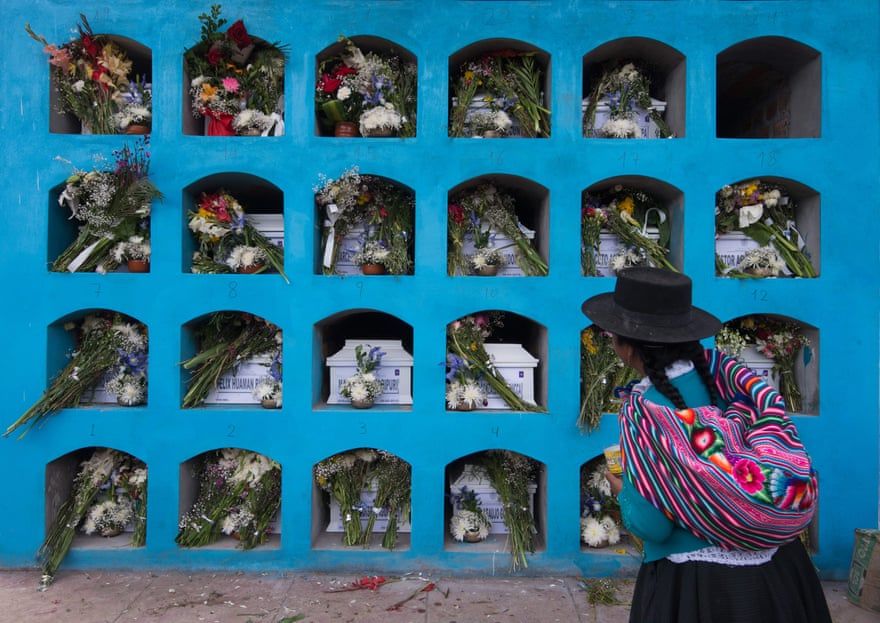 Residents of a village participate in the funeral of 23 of their relatives after their remains were recovered from a mass grave and identified via DNA testing in Huanta municipality, Ayacucho region, Peru.

She was forced to flee with her husband and four young children over the mountains into the Amazon cloudforest.

“We were like wild animals, hiding in caves, hiding in the bush, without food, trying to stay silent,” she recalled. When the state security forces arrived they became trapped between the two forces – each of which accused the locals of supporting their enemy.

“Instead of defending us, the military would kill us too. They would jail us, disappear us, rape us,” she recalled, weeping.

One day in 1985, her husband went to gather potatoes – and never returned. “The soldiers killed him.”

Nearly 40 years later, she lives in Huamanga, the regional capital of Ayacucho, where she scratches by a living for her children by selling food on the street and washing clothes.

“We can never forget what we have seen, it stays in our hearts,” she laments. “No one has asked for our forgiveness, no one.”

For Gavilán, thrust into a war, there was no choice: “We had to kill or we would be killed,” he recalled.

Gavilán’s deliverance from the rebels came in the shape of a military ambush in 1985.

After a decade in the army, he decided to continue his studies with the Franciscan Order in Huamanga. “I was tired of the war, tired of seeing so much death.”

Gavilán completed a doctorate in anthropology at Mexico’s Ibero-American University and now teaches at the San Cristóbal of Huamanga University, where Guzmán taught in the 1970s.

José Coronel Aguirre, 74, an anthropologist and professor at the same university, is one of few living academics who knew Guzmán. He remembers a dogmatic professor who used his position to recruit poor students from rural areas and brainwash them.

“He had no interest in peasant movements or workers’ unions … he preached only about the armed struggle,” said Coronel, who, as a student leader in the late 1960s and 70s, appeared at several events with Guzmán.

The man who considered himself the “Fourth Sword of Marxism” after Marx, Lenin and Mao, was captured by undercover police in a Lima safehouse in 1992. Peruvians saw their tormentor on their television screens, most for the first time, raging with his fist raised inside a cage, wearing a black-and-white striped prison uniform. 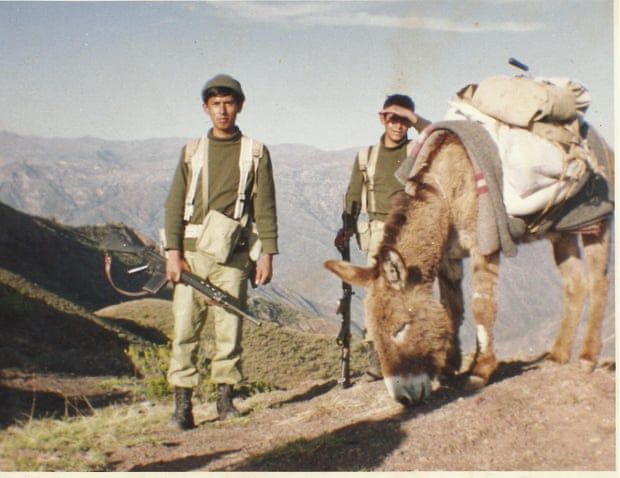 Gavilán as a teenaged soldier aged approximately 15 or 16.

“It’s difficult to talk about Guzmán’s ‘legacy’ because what he left was a reversal in Peru’s social and historical progress,” he said. “The left in Peru has been demonized because it appears unjustly associated with Sendero’s barbarity.

For Ruiz, the memories are still raw. “I can never forgive that man,” she said. “How many families have been left without a father or mother? How many orphans? How many women have died? How many men have been killed, tortured to death?,” she asked.

“We created this monster too, due to the [social] injustices,” reflected Gavilán, who says the root causes of the violence still simmer beneath the surface. “We still haven’t understood this conflict. It’s still with us.”