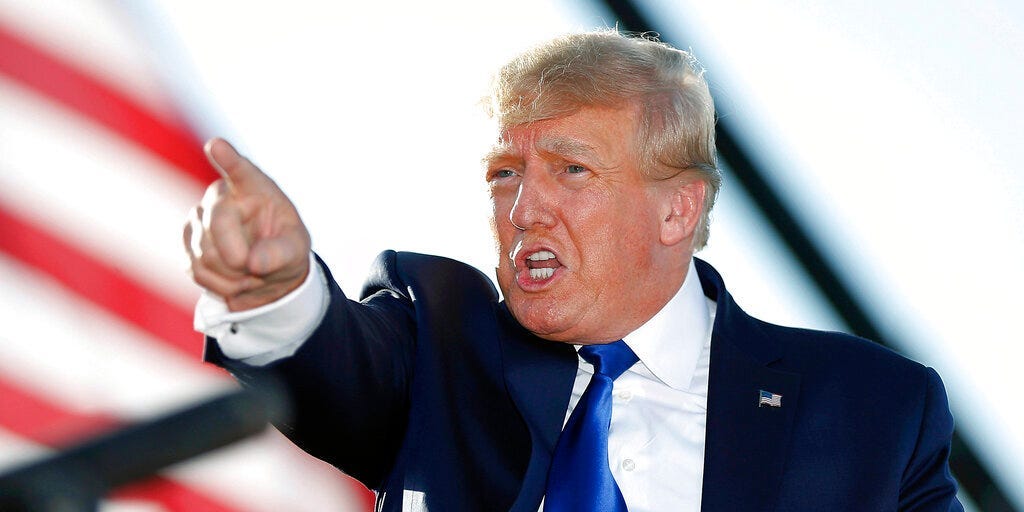 The FBI's search of Donald Trump's Mar-a-Lago residence in Florida follows months of allegations that the former president mishandled government records, including reports of him ripping up documents and photos of notes with handwriting resembling his that he reportedly tried to flush down the toilet.

Republicans have attacked the FBI for carrying out the warrant, with Trump calling it "political persecution" and allies in conservative media like Fox News promoting the idea that evidence was "planted."

The Justice Department is investigating whether he violated three federal laws, including the Espionage Act, when he took classified documents to the resort.

Here's a timeline of events:

The National Archives and Records Administration confirms a Washington Post report that Trump took several boxes of official White House records and memorabilia to Mar-a-Lago when they should have been turned over to NARA, an independent federal agency that preserves government and historical records.

The agency confirms arranging transport to recover 15 boxes of documents, and said Trump and his staff were "continuing to search for additional Presidential records that belong to the National Archives."

The items were said to include correspondence from North Korean dictator Kim Jong Un and a letter former President Barack Obama left Trump in 2017.

Under the Presidential Records Act, official White House records should be given to the agency when a president leaves office.

"We will do what we always do under these circumstances: look at the facts and the law and take it from there," he said.

In an email from the National Archives, Trump's lawyers learn that the FBI would soon review sensitive documents the former president turned over to the government three months earlier. A former deputy White House counsel, Pat Philbin, reviews the email and is later interviewed by FBI agents as part of the investigation into Trump's handling of government records.

The National Archives sends a letter to Trump's lawyer Evan Corcoran outlining weeks of resistance that followed the April email. The letter, which the National Archives released on August 23, documents how Trump sought to delay the FBI's review of records he'd turned over in January.

In the letter, acting Archivist Debra Steidel Wall stresses the urgency of the FBI's need to review the records, which included "100 documents with classification markings, comprising more than 700 pages," she wrote.

"It has now been four weeks since we first informed you of our intent to provide the FBI access to the boxes so that it and others in the Intelligence Community can conduct their reviews," Steidel Wall wrote. She noted that Trump's lawyers had asked for more time to consider whether the batch of documents included records they considered covered by executive privilege.

But Steidel Wall said government lawyers had concluded that executive privilege is held by the sitting president, not a former one, and that President Joe Biden had delegated to her the decision of whether to allow the FBI to review the records.

"I have therefore decided not to honor the former President's 'protective' claim of privilege," she wrote.

CNN reports that Trump's legal counsel received a letter from federal authorities requesting them to secure the room where the sensitive documents were stored. Trump's staff then attached a padlock to the room door to secure it, according to CNN.

Federal authorities issue a subpoena to the Trump Organization to receive surveillance footage of the Mar-a-Lago resort as a part of their investigation into Trump's handling of sensitive documents, CNN reports.

The world learns that the FBI carried out a search warrant at Trump's Mar-a-Lago home when he announced it, himself, in a statement, calling it an "unannounced raid" on his home.

Trump, who was not at his South Florida club at the time, confirmed the search after it was first reported by Florida Politics.

Also that day, The New York Times reporter Maggie Haberman shares photos with Insider that show notes in the bowls of two toilets with handwriting resembling Trump's. The images were also published Monday by the news outlet Axios.

Attorney General Merrick Garland says the Justice Department has filed a motion in court to unseal the Mar-a-Lago search warrant and property receipt.

"The Department filed the motion to make public the warrant and receipt in light of the former president's public confirmation of the search, the surrounding circumstances and the substantial public interest in this matter," Garland said. "Faithful adherence to the rule of law is the bedrock principle of the Justice Department and of our democracy. Upholding the rule of law means applying the law evenly without fear or favor. Under my watch, that is precisely what the Justice Department is doing."

Prior to Garland's remarks, the Justice Department publicly declined to comment on the matter.

A judge who signed off on the warrant orders the Justice Department to confer with Trump's legal counsel by 3 p.m. EST on Friday about whether he wants to fight the release of the documents.

Later in the day, Trump writes on his social media platform that he supports the "immediate release" of the search warrant.

Trump puts out another statement accusing former President Barack Obama of also holding on to classified documents after he left the Oval Office.

"President Barack Hussein Obama kept 33 million pages of documents, much of them classified. How many of them pertained to nuclear? Word is, lots!" he wrote.

The statement came hours after he responded to a Washington Post report that the FBI searched for classified documents that contained nuclear information, calling that a "hoax."

The Wall Street Journal also reported that the FBI took 11 sets of classified documents back with them after searching Mar-a-Lago.

Trump's legal team files a lawsuit requesting a judge to stop the Justice Department from reviewing the documents that were seized during the FBI's search of Mar-a-Lago.

The former president's lawyers also demanded that the court appoint a "special master" to review the records to "protect the integrity of privileged documents."

The Judge gave Trump's legal team until Friday to provide more details on their request.

The Justice Department releases a redacted version of the Mar-a-Lago affidavit, revealing more details about the classified documents kept at Trump's Florida resort.