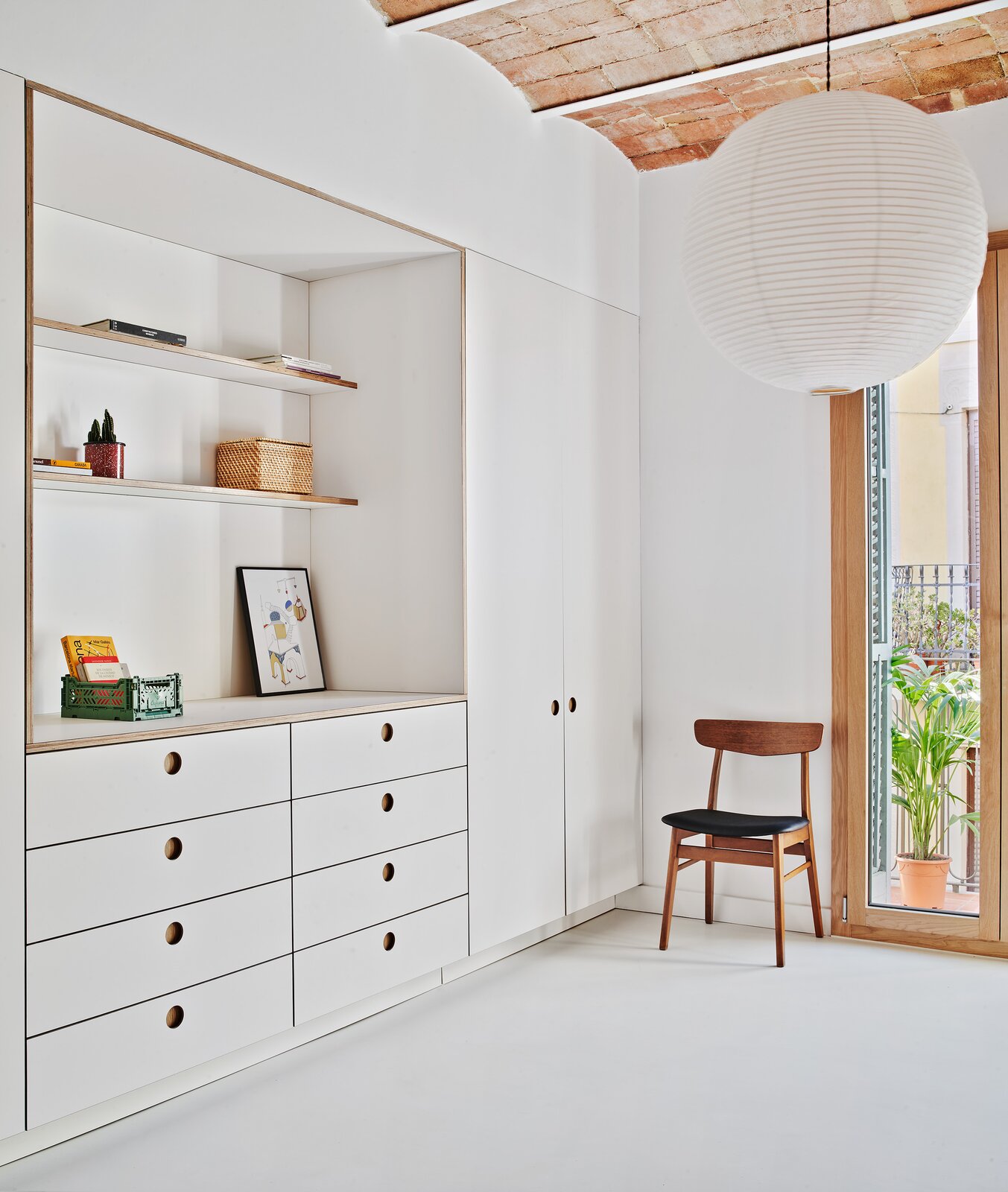 Well-traveled couple Lucia Marengo and Julian Kraan felt right at home when they discovered the Gràcia district in Barcelona. The village-esque neighborhood had great food, and with the city’s mediterranean climate, was the perfect place to ride bikes. "We sometimes wondered whether we accidentally went on holiday," says Julian. And while everything felt idyllic for the couple, the flat they bought there was far from perfect. 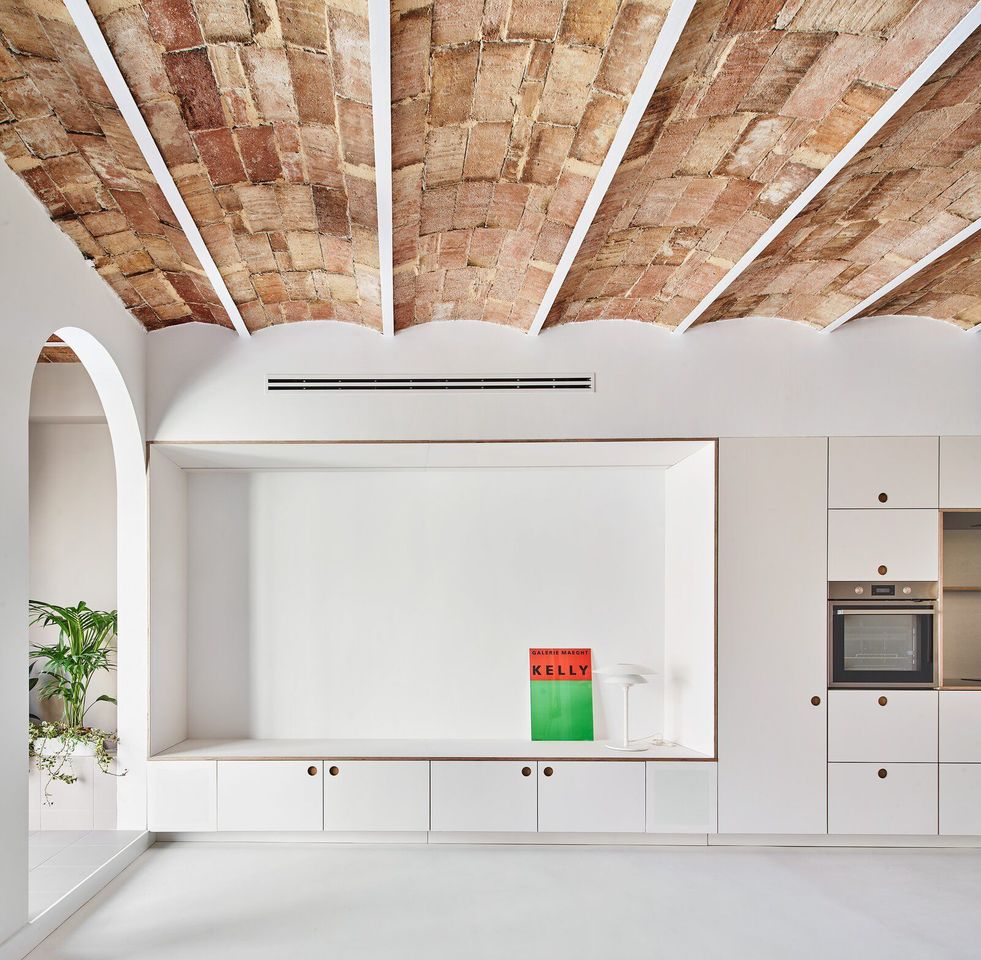 Chosen for the view it provided, and its location on a quiet and car-free street, the top-floor apartment they purchased had low-ceilings and felt cramped. With nine different rooms across a single floor of about 800 square feet, it wasn’t exactly the wide open space the couple had wanted. Architect Noelia de la Red of Allaround Lab soon stepped in, addressing that primary desire head on. "We literally threw out all the partitions," says de la Red.

For the new layout, Allaround organized the apartment with four distinct spaces that run lengthwise. Since Lucia loves to cook, and the couple loves to entertain, the kitchen was placed at the middle of the bar-shaped floor plan, and is open to an adjacent living and dining area. "[The kitchen] is right in front of you when you enter the apartment, and it’s in sight from all parts of the home," says Julian. On the other side is the laundry area and bathroom space, through which is the couple’s bedroom. On the opposite end of the home-next to the living area-is a small garden terrace. 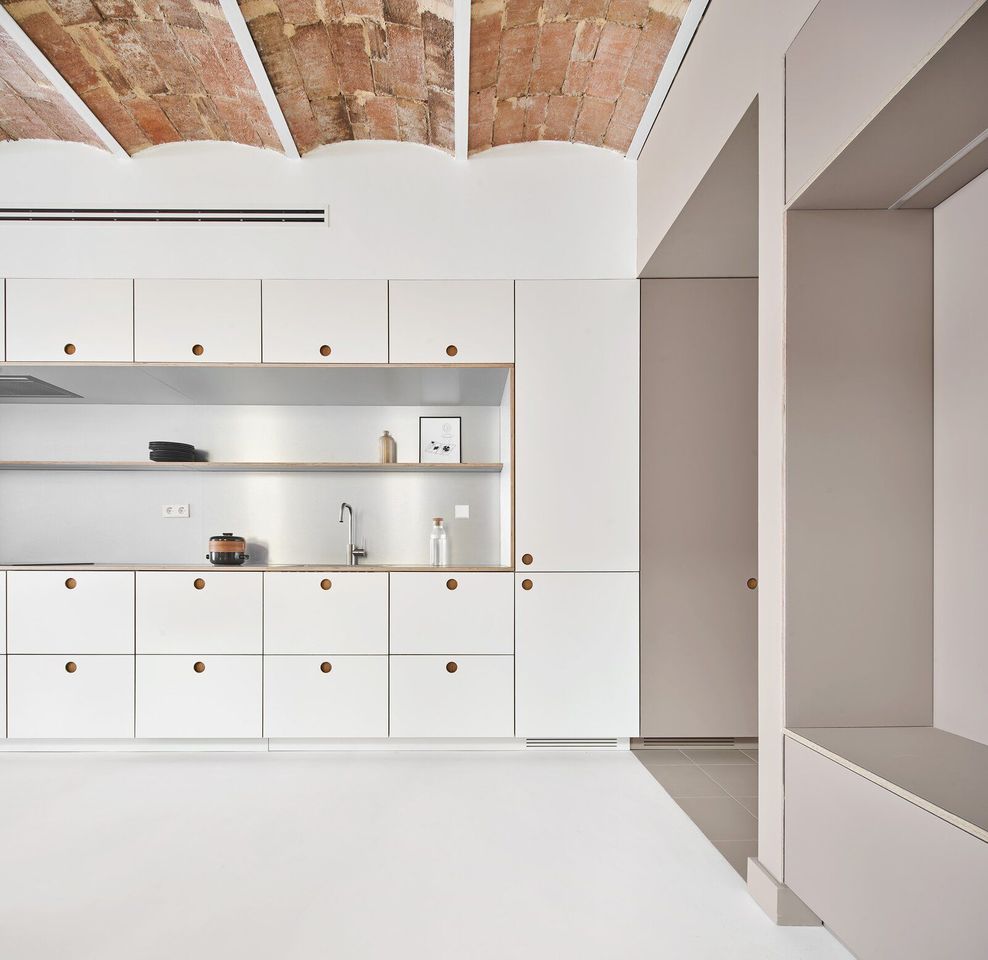 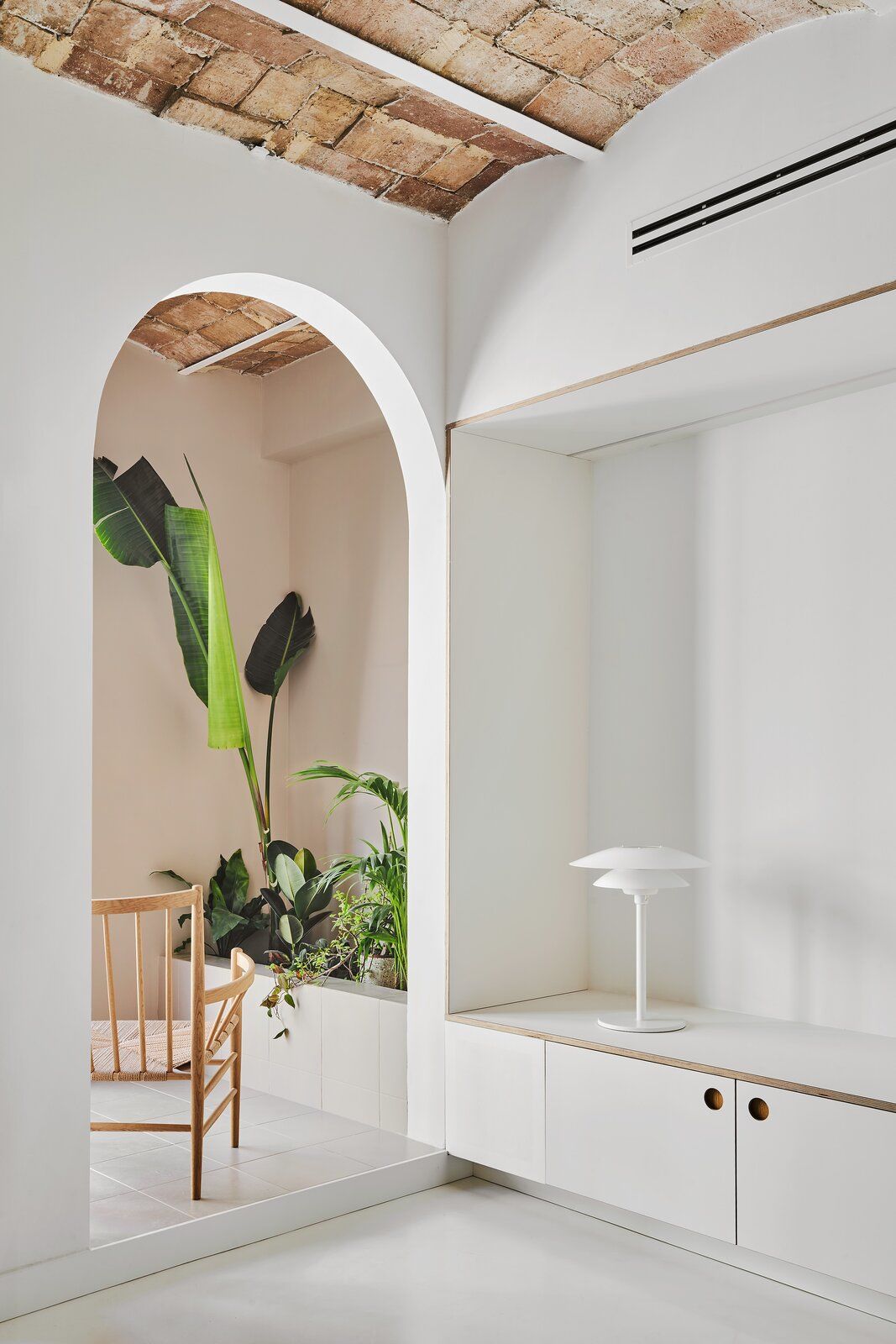 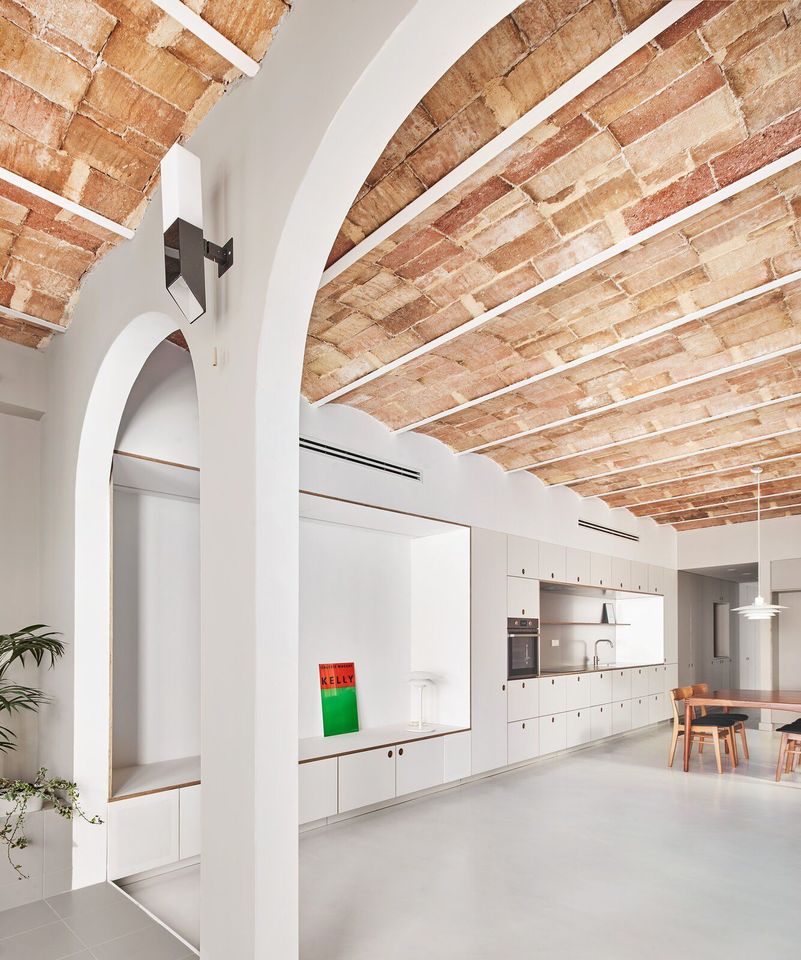 "It’s used as a winter garden," says de la Red, "an intermediate space between the interior and the exterior." Positioned for sun, the space helps collect heat for the home during colder months, and is used as a terrace in the warmer ones. The plants, carried over from Julian and Lucia’s previous flat, provide a welcome hit of green.

In gutting the flat, Allaround Lab discovered that the apartment’s unusually low ceilings masked an original barrel-vaulted brick and iron-beam ceiling. By exposing it, the firm not only added volume to the interiors, but also enhanced it visually. The cleaned and restored brick provides a warm, rosy tint and rough-hewn texture throughout the apartment. 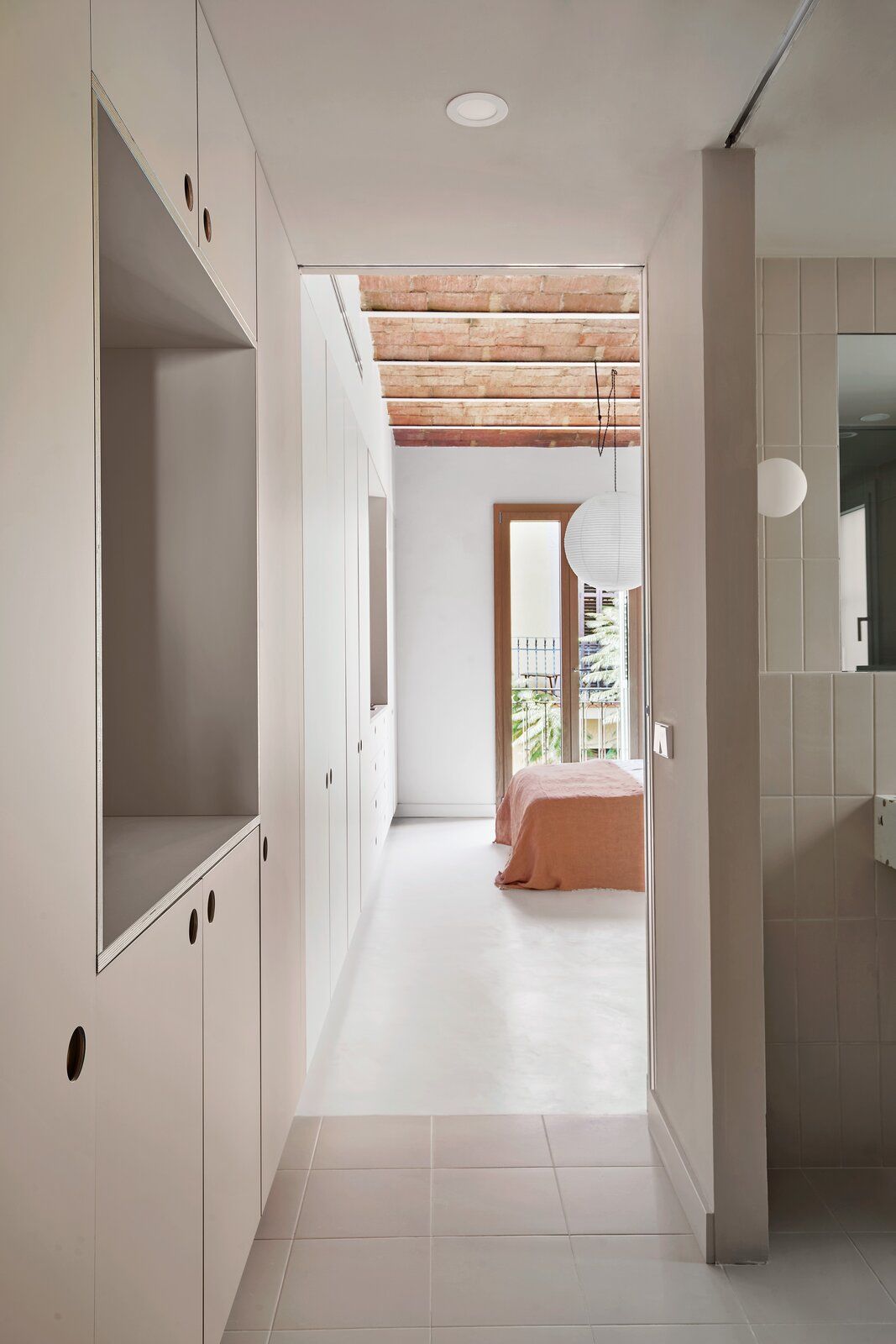 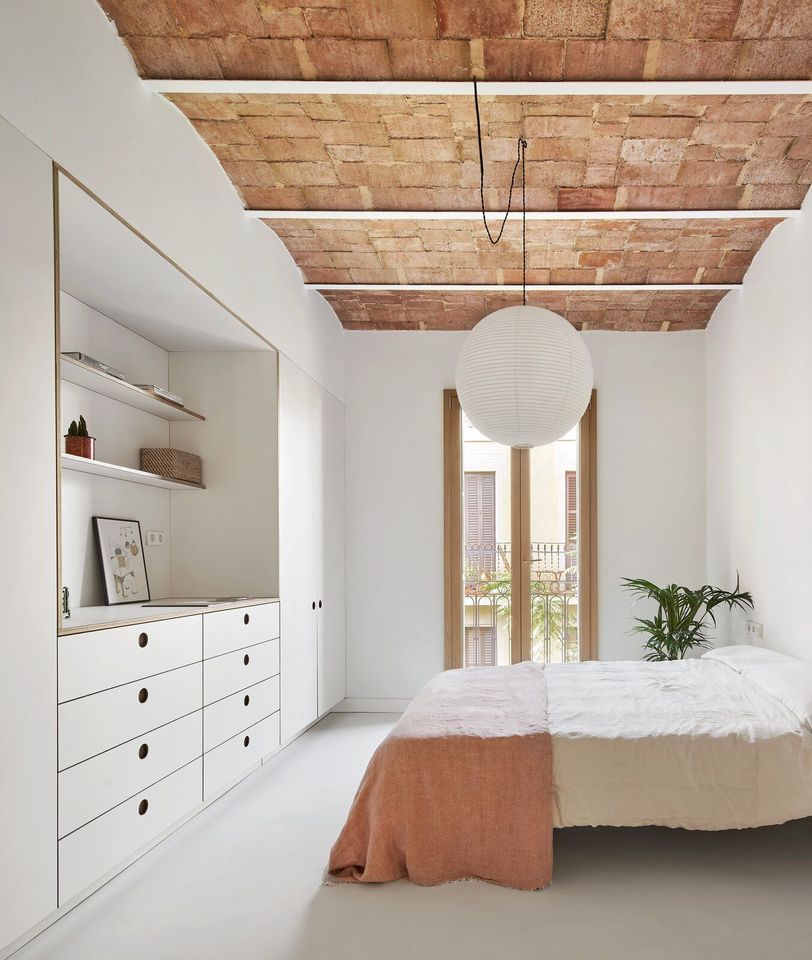 The rest of the home’s interior palette is neutral, with very slight variations to define each of the four distinct areas. The larger living and sleeping areas, both in white, feature micro-concrete floors and wood detailing; the garden area and the bathroom/laundry area, which divide the other spaces, are each colored in what de la Red calls a "pinkish" tone. Each features gray-tiled flooring and metal window frames.

For storage, Allaround installed a wall of built-in cabinetry from IKEA that runs the length of the apartment-"so that we can hide away our stuff," jokes Julian. The cabinetry, customized by Cubro, seamlessly integrates appliances like the refrigerator, dishwasher, and laundry machine into the home. In another custom touch, speakers are slotted into the benches in the living room. 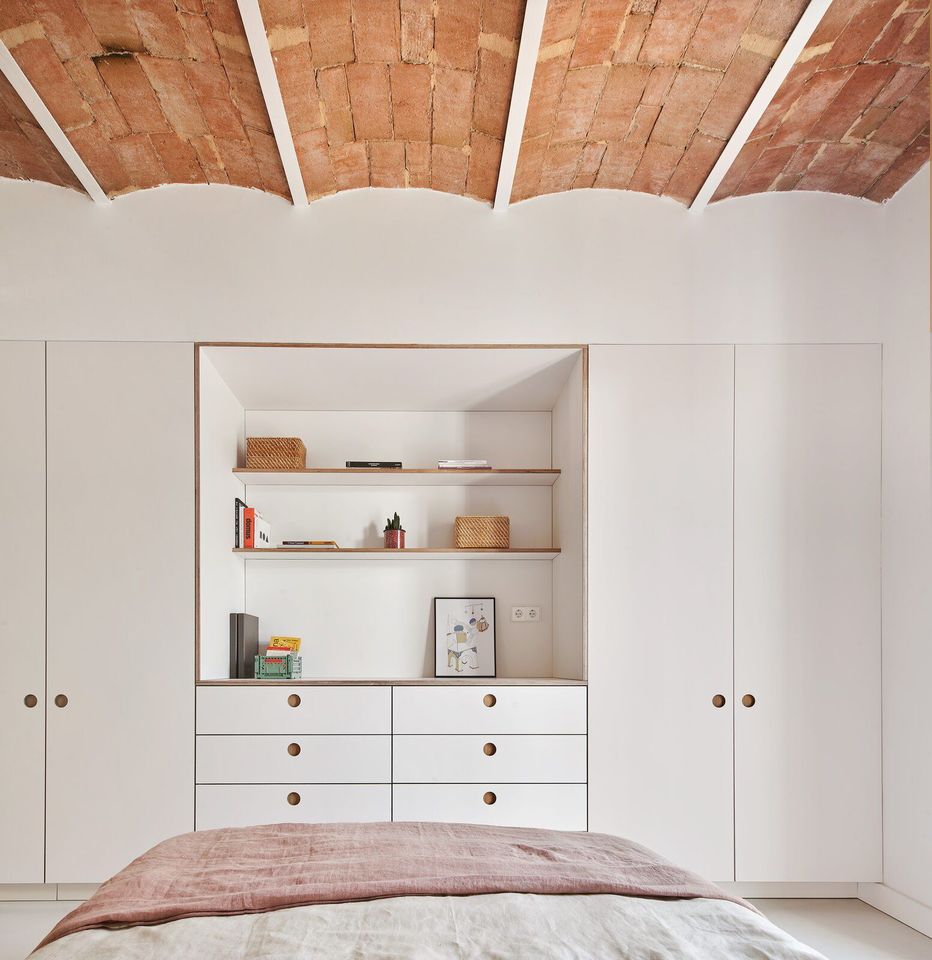 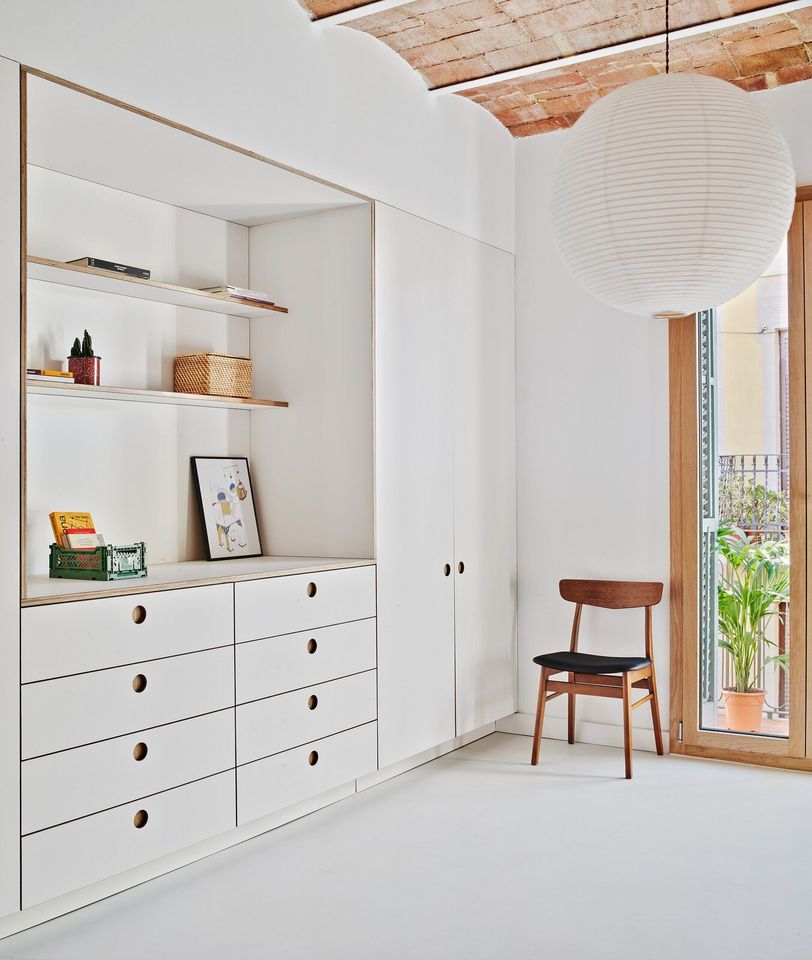 Each section of the long stretch of cabinets divides the flat aesthetically while also providing a secondary function to storage. The living room cabinets are lowered to double as seating for guests, while in the kitchen, the cabinet countertops feature a metal finish. In the bedroom, the open shelving provides space to display personal effects.

Julian, who’s a UX/UI designer, says he leans toward unfussy design. His slant matches nicely with Allaround’s motto of "simple solutions to complex problems," but the firm also has a penchant for playful elements. A good example is in the bathroom, where pale-rose subway tile provides a backdrop for a custom, floating terrazzo vanity from Huguet that resembles a thick slice of Turrón candy studded with jeweled fruit. 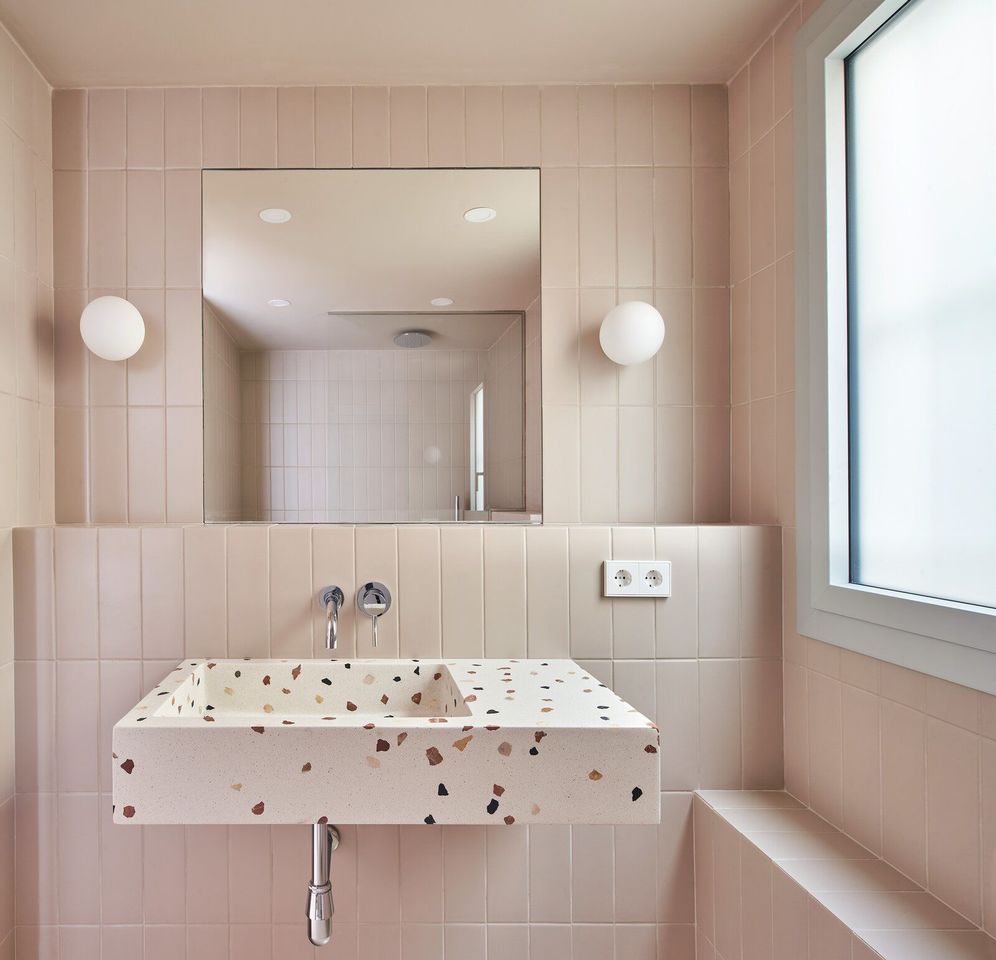 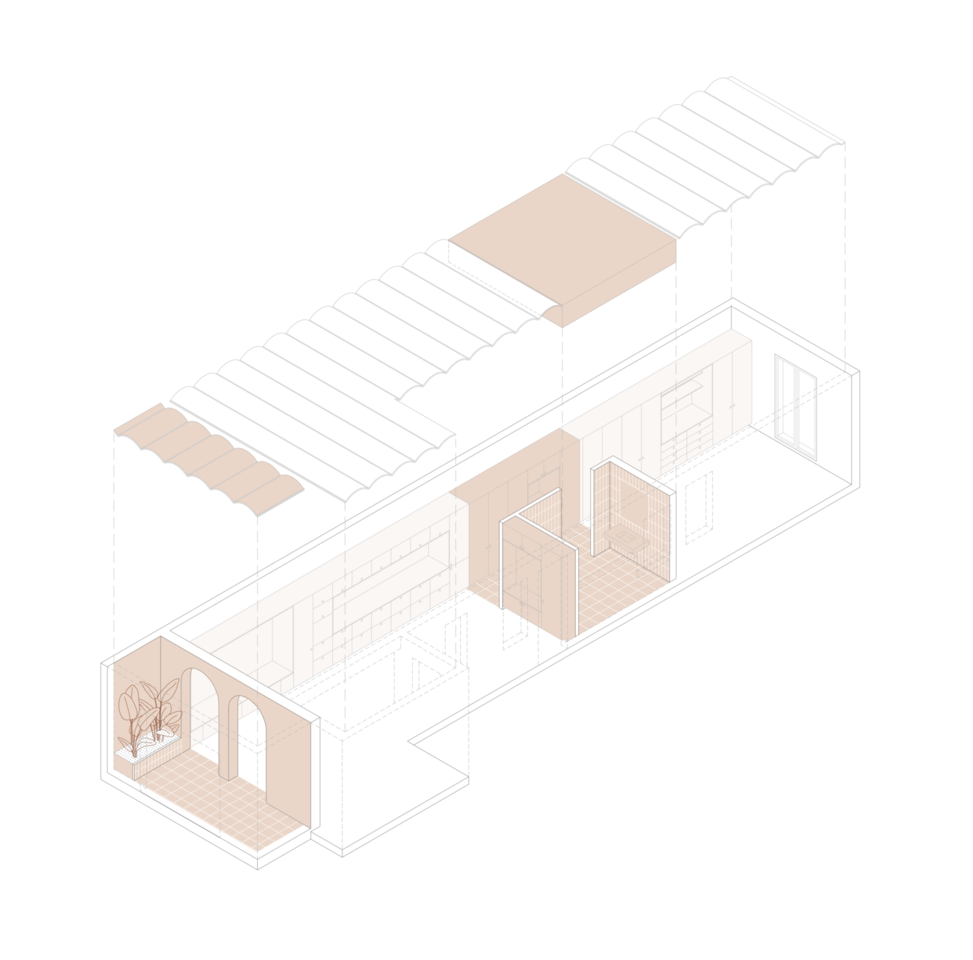 In another playful moment, the home’s entry doors close to blend seamlessly into the walls. The colors a perfect match, and the frame retreats into the built-in guide on the false ceiling. In contrast, the glass doors and windows at either end of the flat demand attention-especially, says Julian, "when the morning sun streams in through the gallery arches, and later, in the evening, when you can watch the sunset from the bedroom."