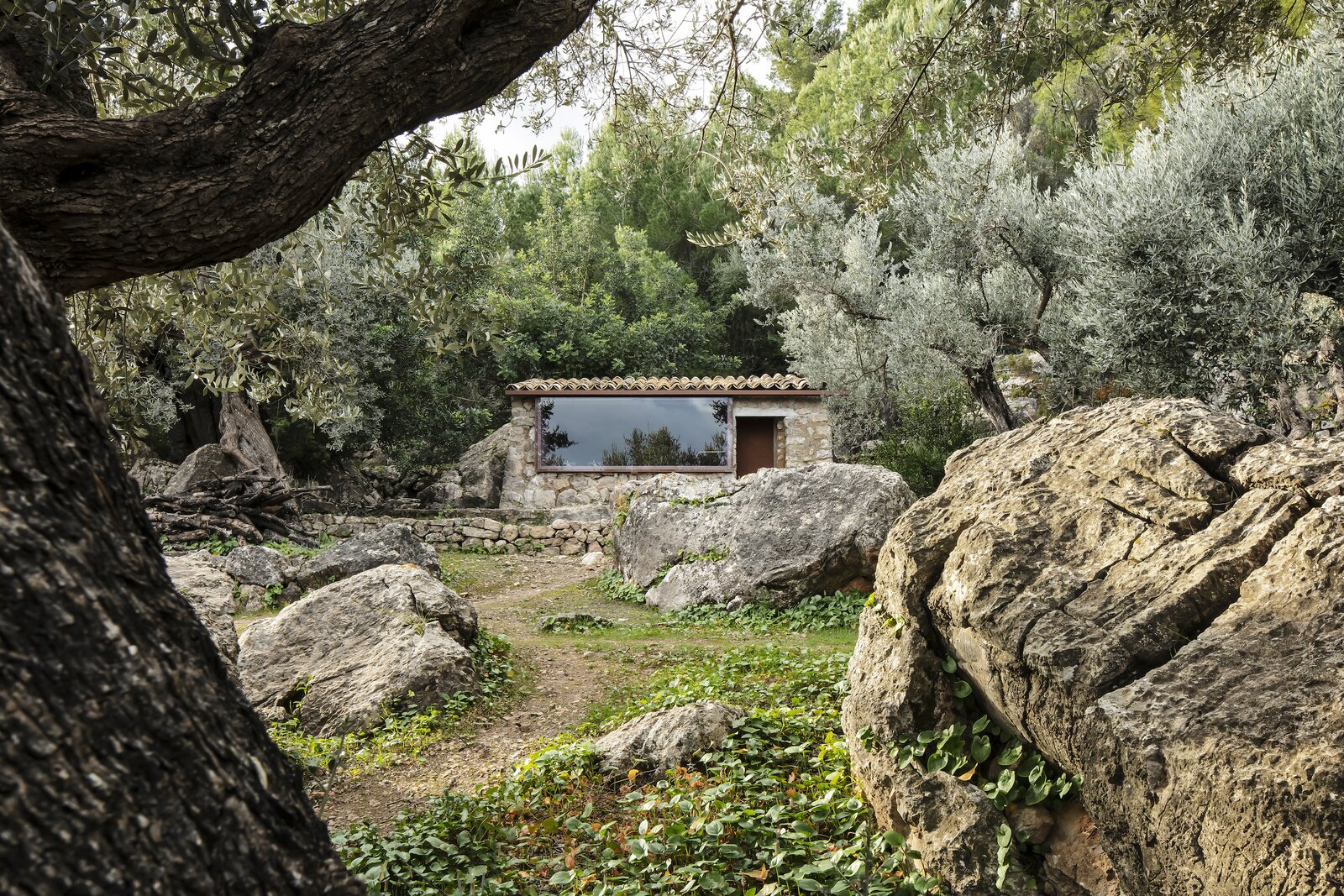 Mar Plus Ask designs two dreamy homes that take cues from the storied olive trees on the Spanish island of Mallorca.

For architects Mar Vicens Fuster and Ask Anker Aistrup of Mar Plus Ask, the natural and built landscape is the starting point for any design. "We like intimate spaces that have measured openings to the surroundings, that sculpt [and incorporate] natural light, and that use natural, sensorial materials," Aistrup says.

The architects consider the landscape and then make design choices to weave each building into its context, so that it appears to have always existed on the site. They use local, organic materials that reflect and absorb sunlight, facilitating shadow and light play. "Each piece of architecture will be different if your starting point is the context," Aistrup says. "We study the history, the placement, the vegetation, and the setting sun, so that a building can belong." 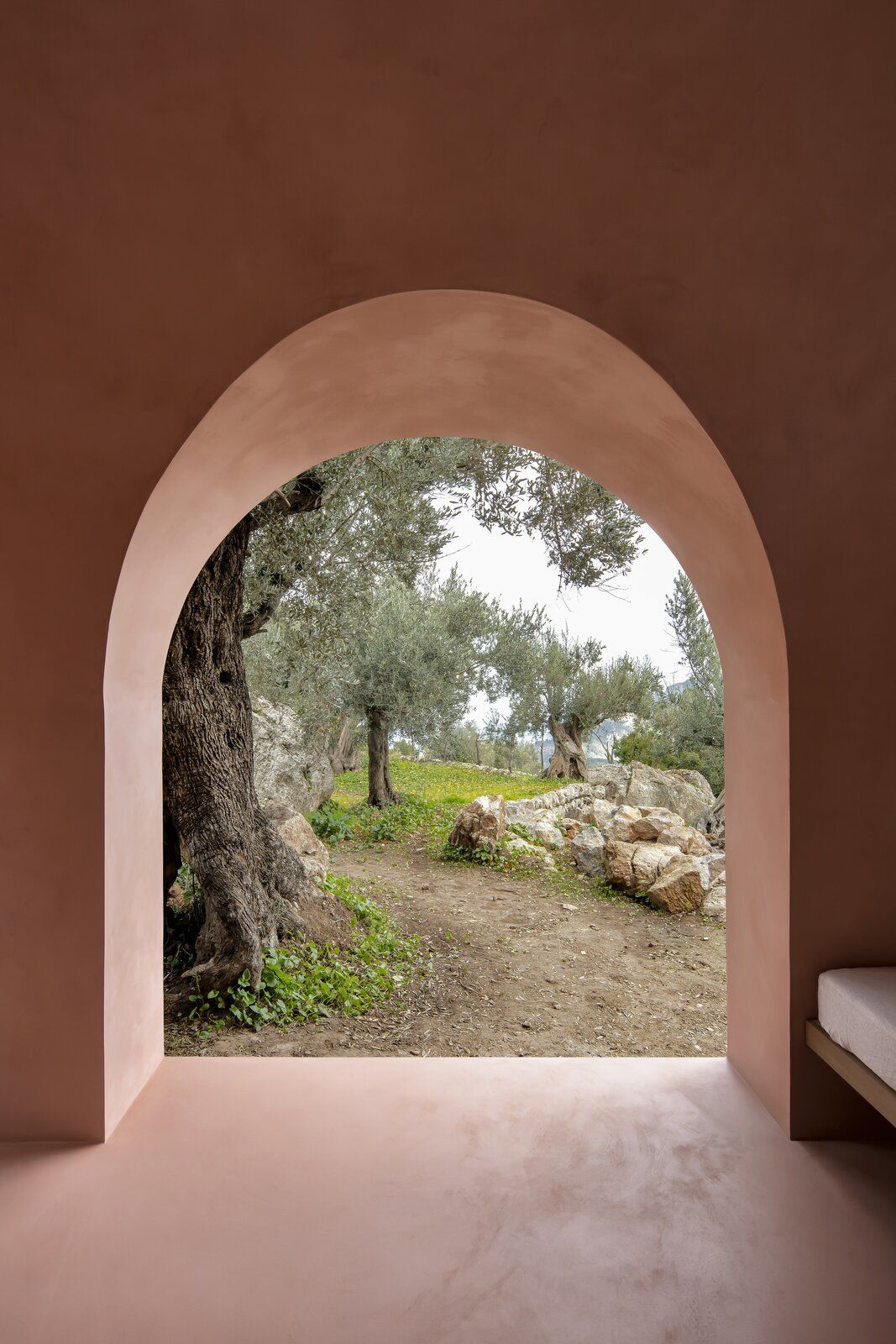 The walls, floor, and ceiling of one of the Olive Houses is enveloped in a pale pink tone-the color found on the leaves of the olive trees that dot the landscape. 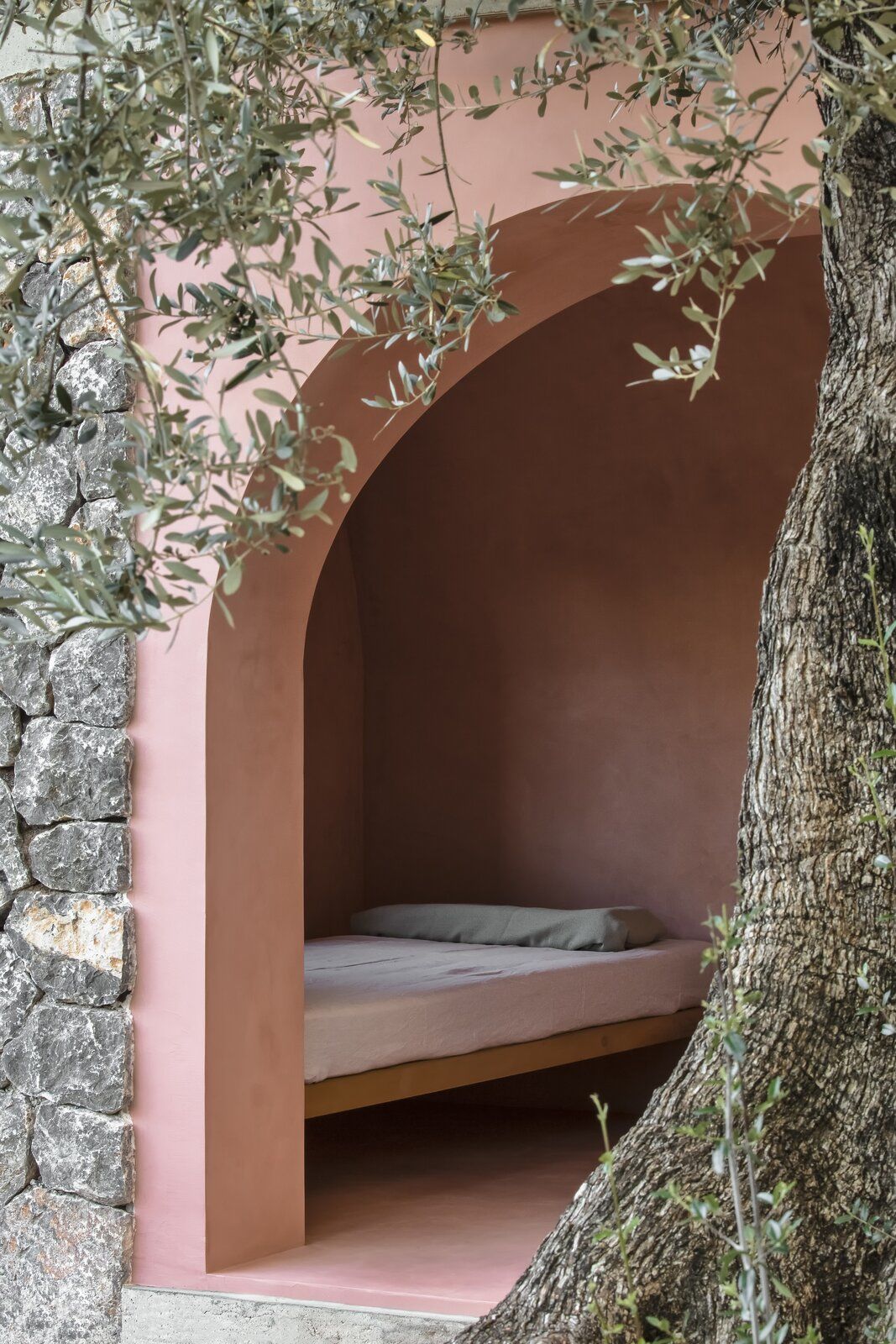 The bedroom area in the pink house is framed by an arch opening.

Mar Plus Ask’s Olive Houses-a set of micro homes that function as a year-round retreat for architects, artists, and writers in Mallorca, Spain-are no exception. The tiny, 260-square-foot homes aren’t just tied to the natural landscape-they look like they’re part of it.

"High up in the Tramuntana Mountains with views overlooking the Mediterranean Sea, the off-grid houses are surrounded in all directions by thousand-year-old olive trees that stand on man-made terraces of dry stacked stone, where only the wind and bells tied to grazing sheep can be heard," Aistrup says. 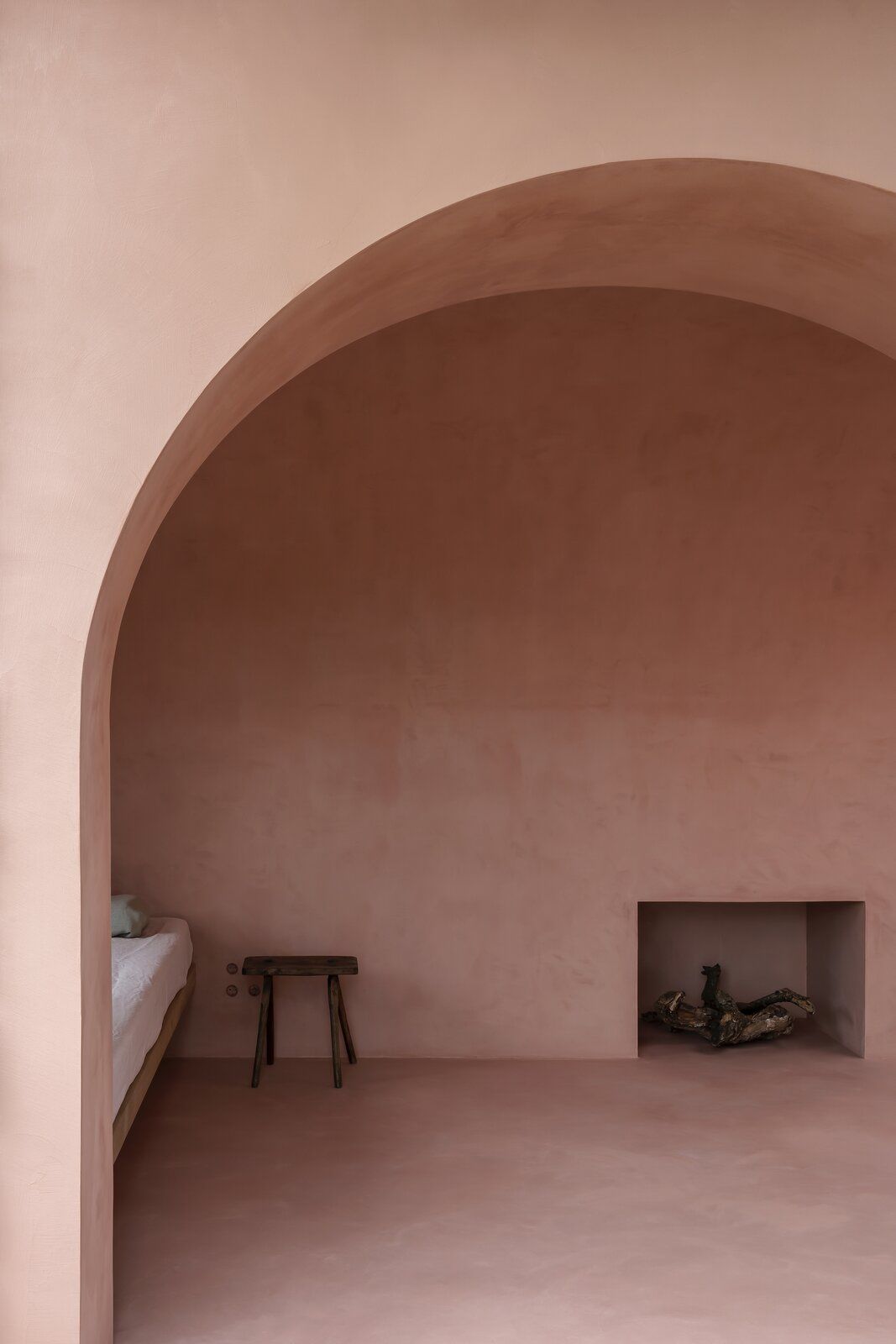 A fireplace near the bedroom area provides warmth during the winter months. 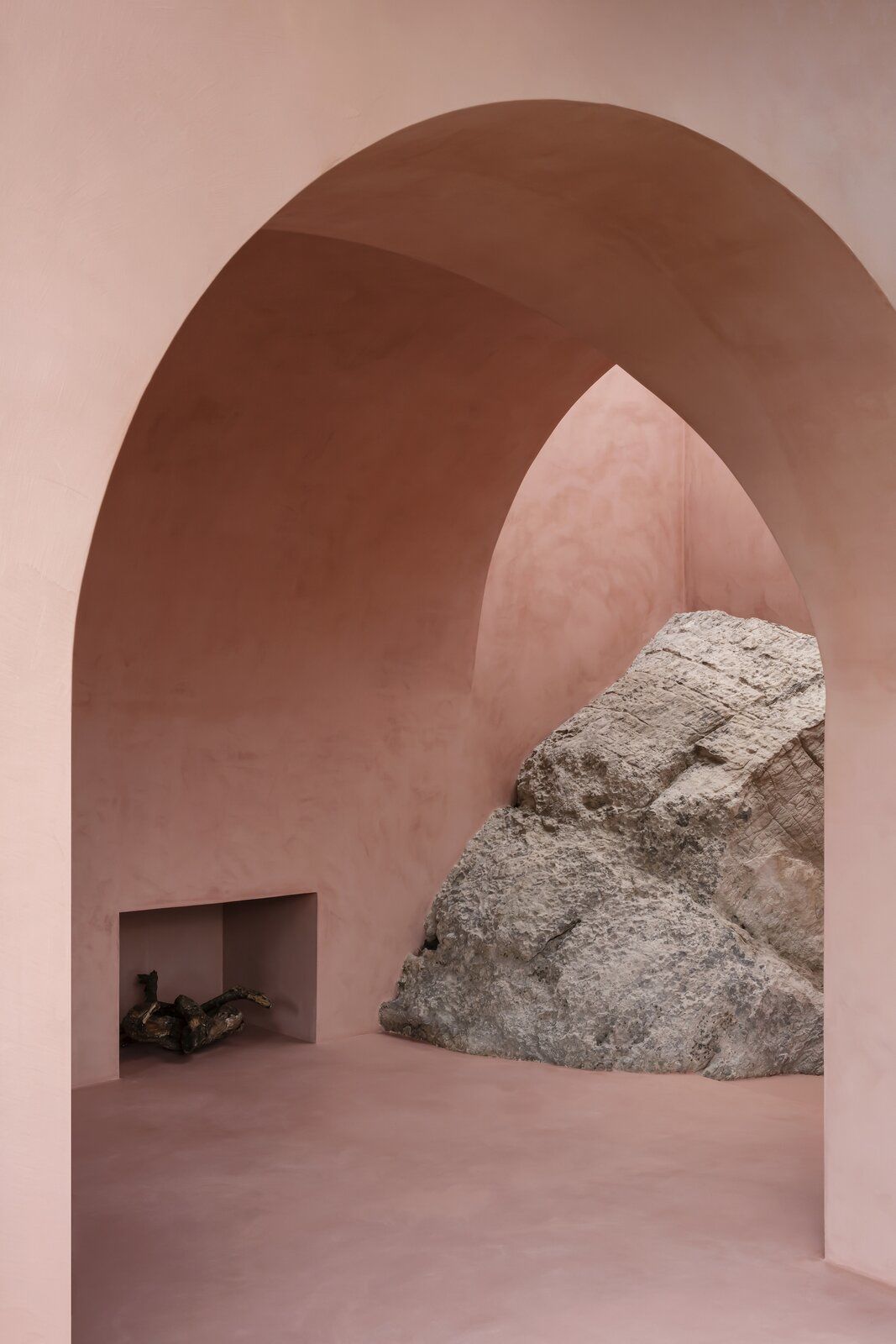 A massive existing rock formation is embedded into the design, anchoring one corner of the tiny home and tying it to nature. 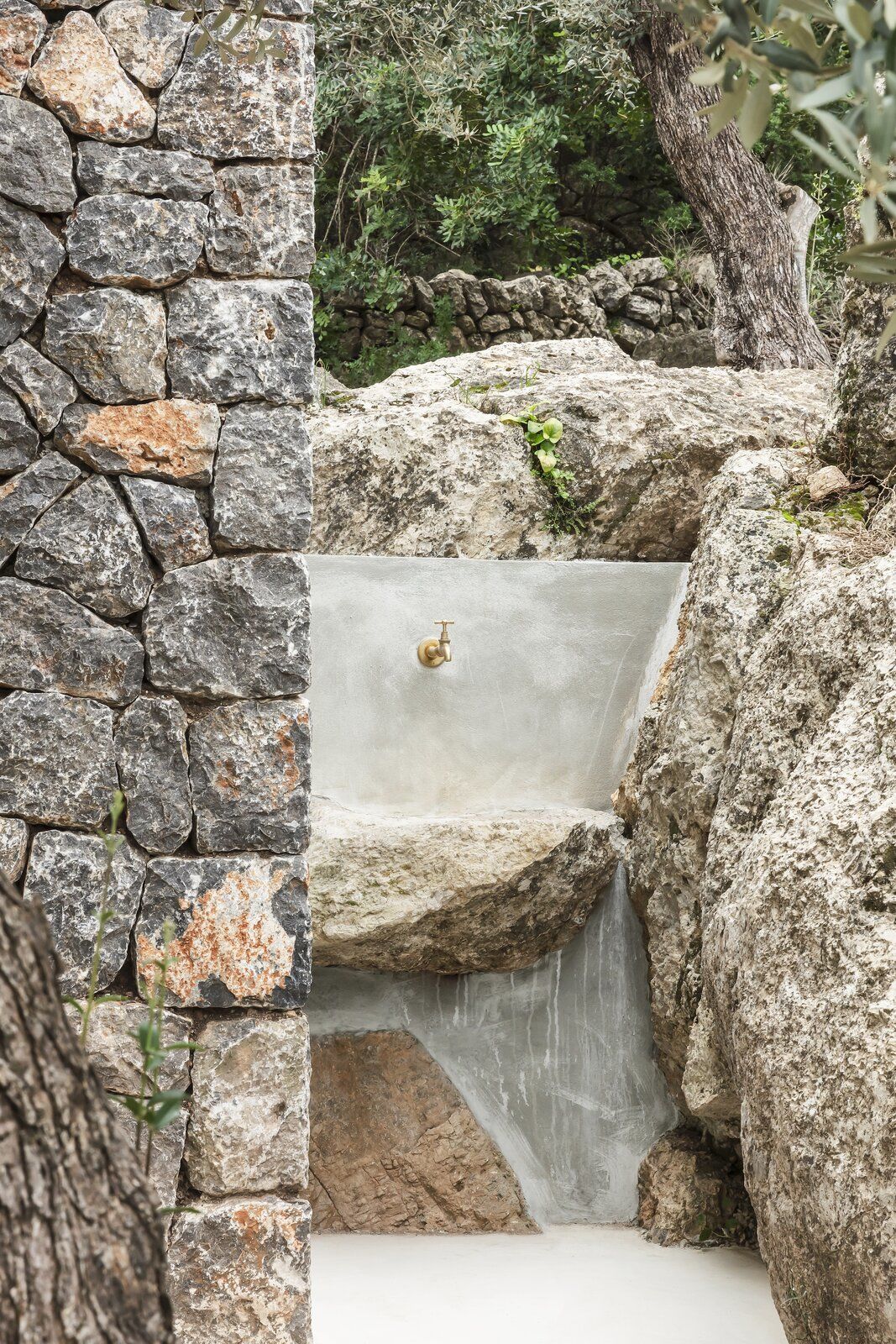 An outdoor shower built into the stone is located at the rear of the tiny house.

The purple house is wrapped in stucco and equipped with a bathroom, a kitchen with two gas burners, a sink, a wood-fired oven, a table with stools, and a refrigerator powered by solar panels. The pink house, also sided with stucco, features a bed, a shower, and a fireplace.

"We reused an old stone structure for the purple house, which is the complimentary color to the dark side of an olive tree leaf," Fuster says. "Using the existing structure meant that only one new structure was needed."

They built the new pink house into existing terraces, so that it’s practically invisible and partially underground. "Some of the terraces, and most of the olive trees here are over a thousand years old," Fuster says. "The terraces are cut into the hillsides in straight lines with mathematical precision, seemingly unaffected by sharp corners and gorges. Even with today’s machinery, it seems impossible." 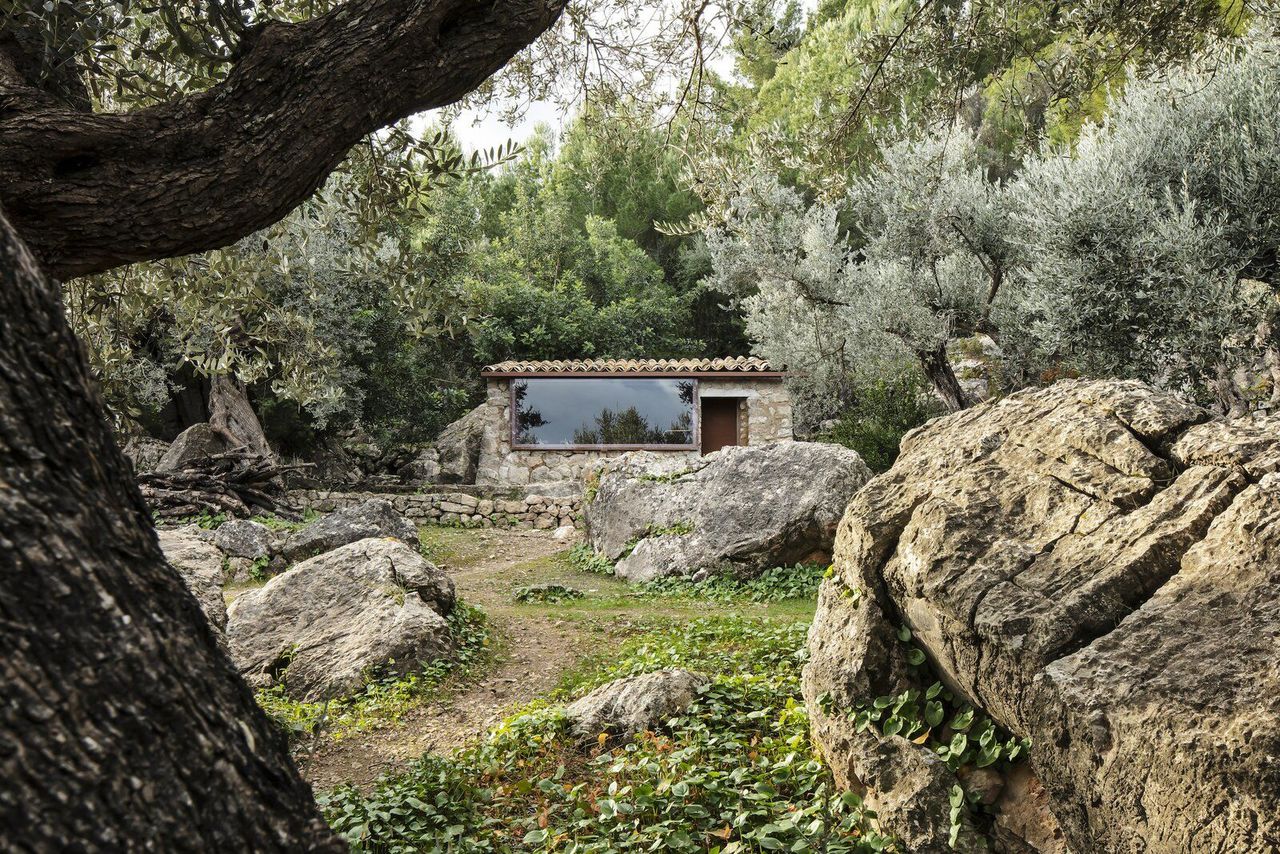 A second tiny house is set within an existing structure and contains a kitchen, dining area, and bathroom. 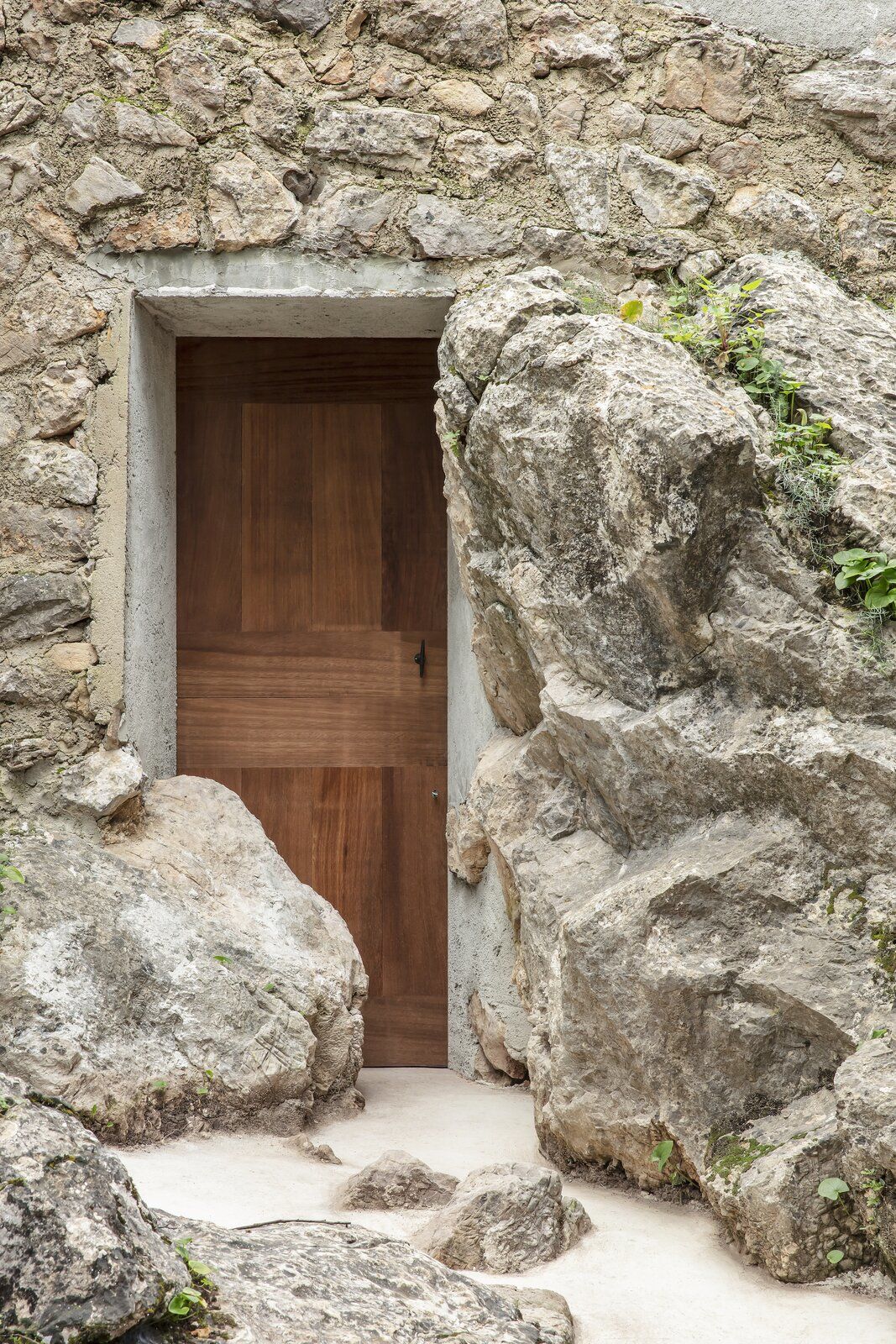 The teak front door of the existing house offsets the stone walls, lending warmth and texture.

At one end of the pink house, a vaulted ceiling dissolves into a large skylight. Beneath the skylight is a shower beside an existing rock formation that the architects incorporated as part of the design.

"When looking at nearby houses, we saw that some were built into sloped mountainsides," Fuster says. "This appealed to us as a [way] to keep the house cool in the summer, but also as a spatial idea. A home that’s half underground and has an open fireplace is somewhat reminiscent of the oldest archetype of man’s first home, a cave."

Water for the shower is provided via a natural spring behind the house, and the building’s pink tone represents the lighter shade found on the matte side of an olive-tree leaf. "Pink covers the walls, floors, and ceilings," Fuster says. "When looking into the landscape, the complementary colors of the olive trees provide an optic effect which becomes more defined, vivid and crisp." 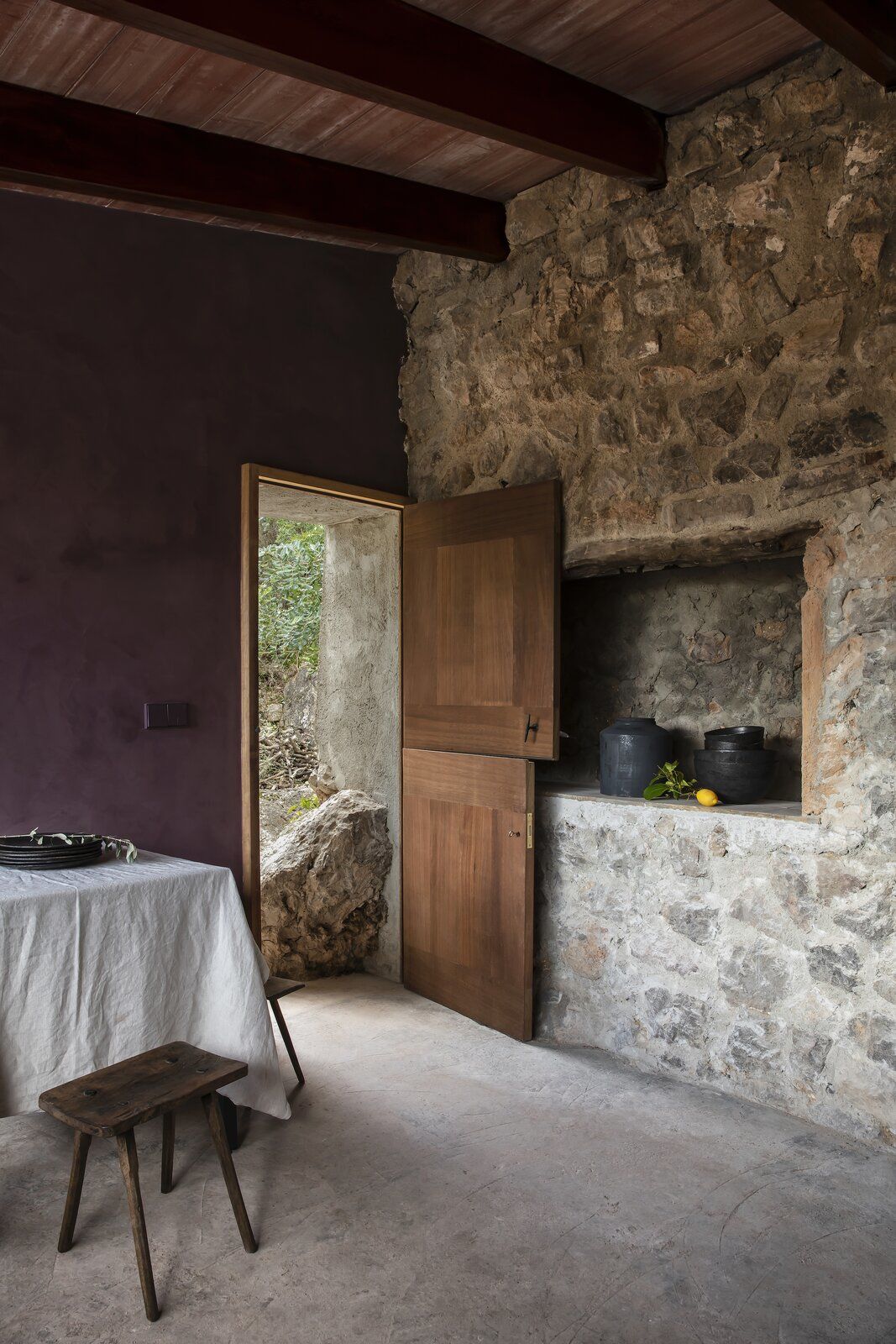 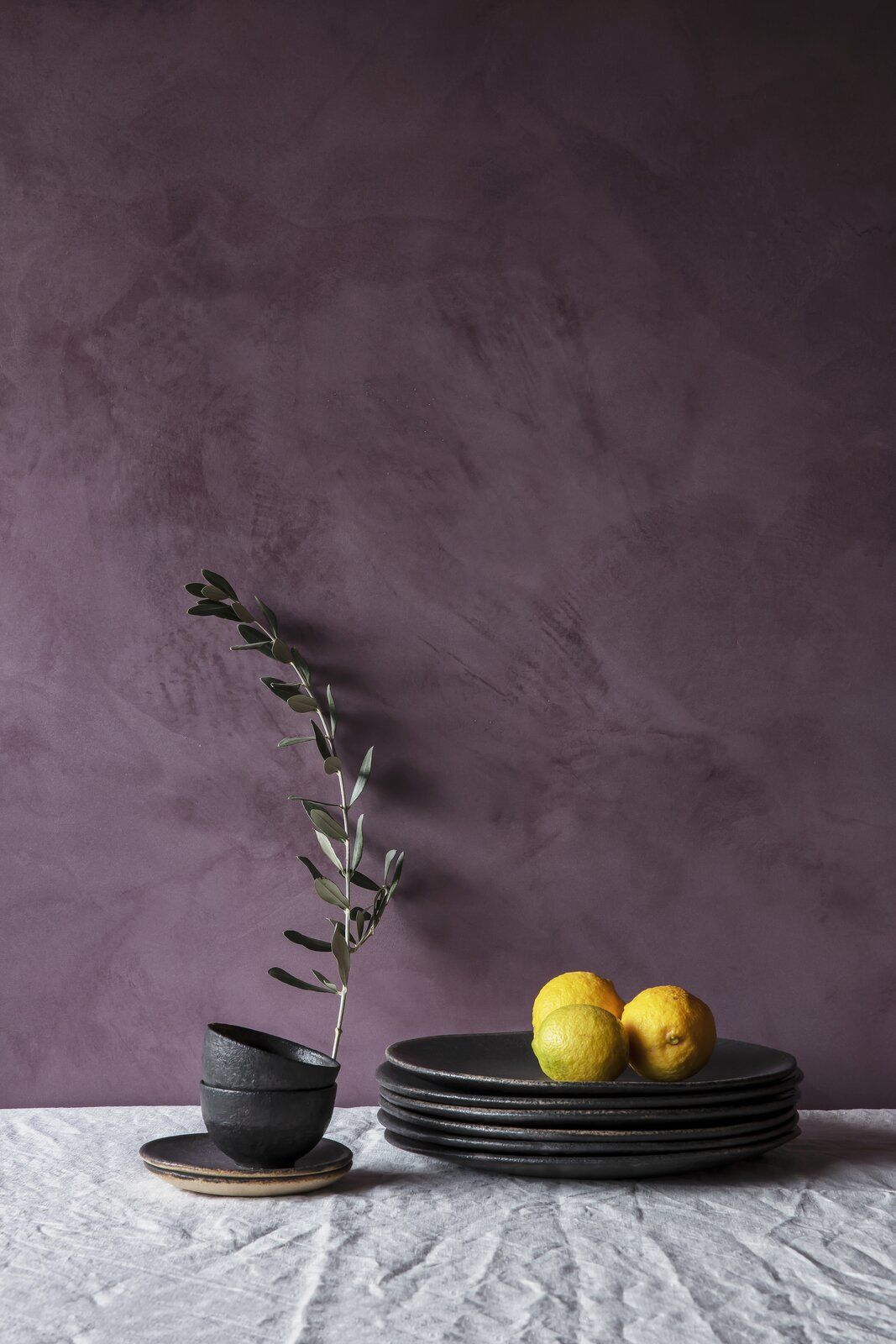 The purple shade on the existing home’s interior walls is another color found on the leaves of the olive trees that grow on the site. 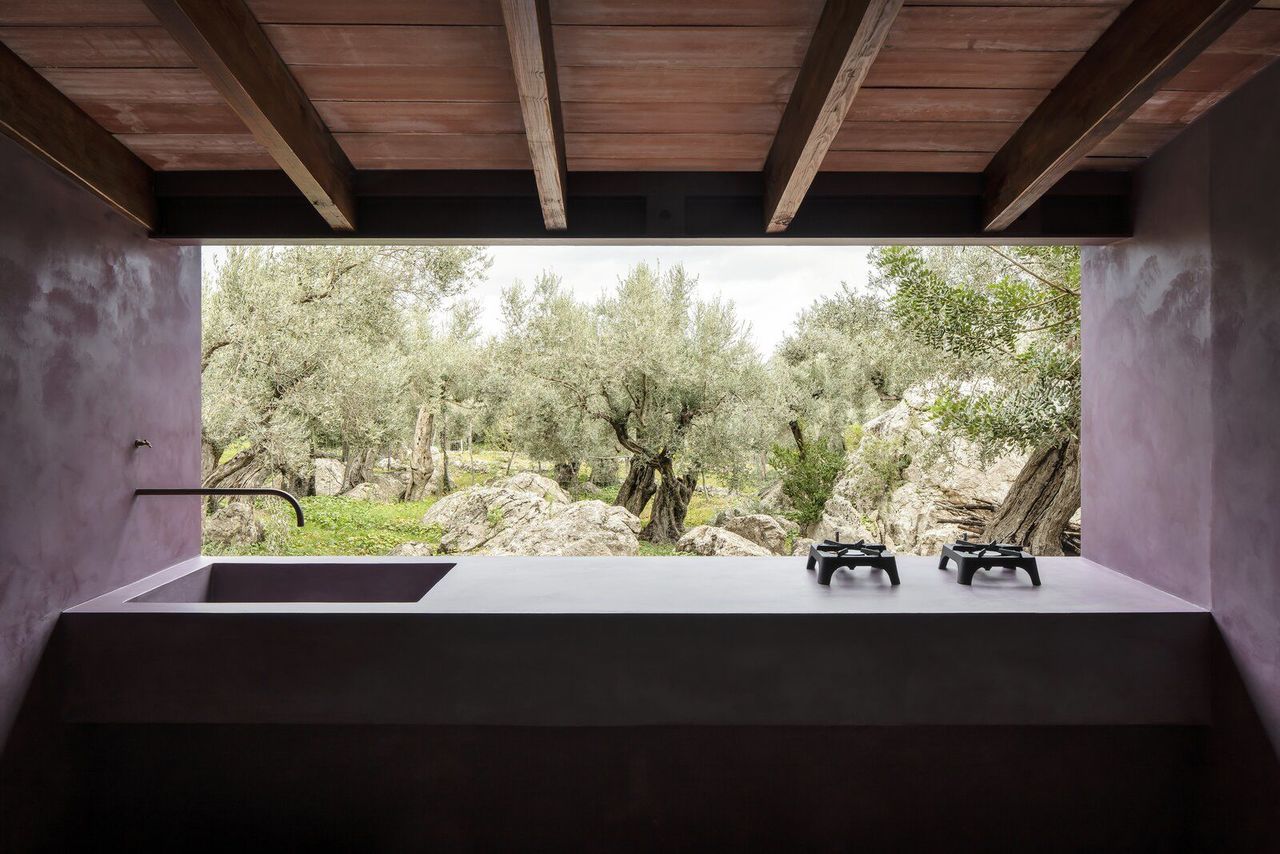 The area, rich with olive trees, massive boulders, and views of the Tramuntana Mountains and Mediterranean Sea, is on the UNESCO World Heritage List.

"It’s a response to scarcity rather than excess," Aistrup says. "We normally lay out some basic dogmas, and in this case, the first was obvious—we would not touch or cut any olive trees or move any rocks. The Olive Houses blend seamlessly and sensitively into this magical setting. A house not only serves its inhabitants, it belongs and contributes to the city, street, or landscape as a whole."