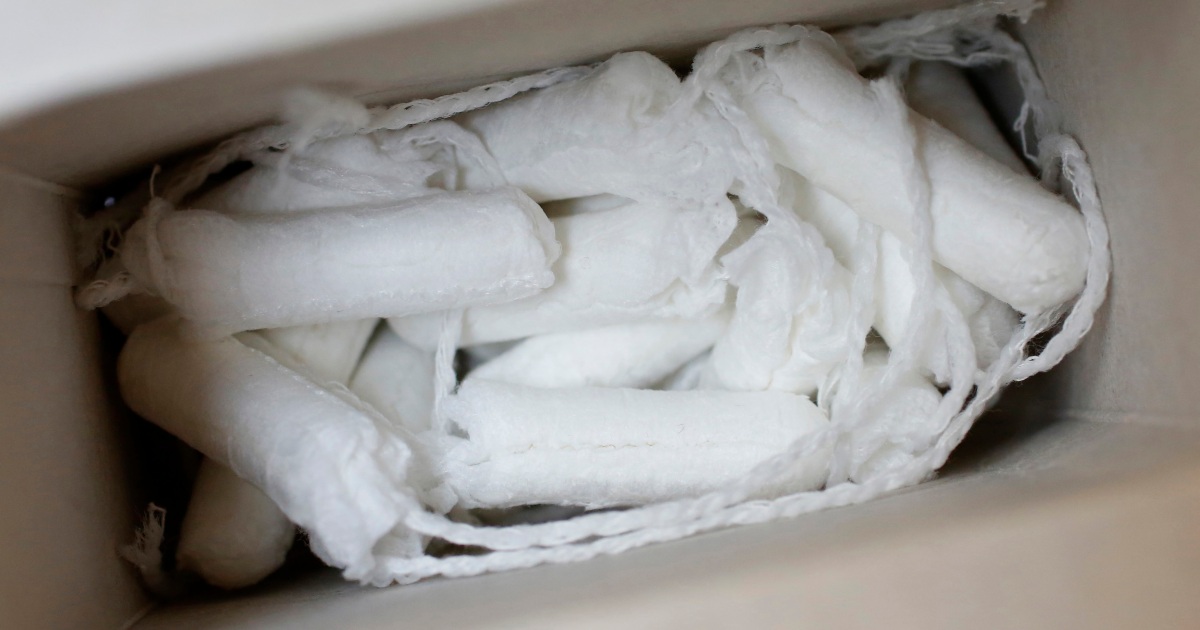 ‘A crisis’: The US tampon shortage, explained

People who need menstrual products are struggling amid a shortage of tampons in the US. What exactly is going on?

People who need menstrual products in the United States have raised alarm in recent months, after noticing fewer tampon packages on store shelves, or being told their preferred brand of tampons was suddenly unavailable.

The issue really came to the public’s attention when TIME Magazine published an article earlier this month titled, The Great Tampon Shortage of 2022: The Supply Chain Problem No One’s Talking About.

“In the last few months, I’ve visited stores in New York, Massachusetts, and California—no tampons. And it’s not just me,” author Alana Semuels wrote on June 7.

Manufacturers and retailers have acknowledged the problem, saying they are working to build back inventories and restock stores, but rights advocates say that, in the meantime, people who need tampons but cannot get them – especially lower-income Americans – are suffering.

“Not having access to menstrual products when you need them is indeed a crisis,” Jennifer Weiss-Wolf, Women and Democracy Fellow at the Brennan Center for Justice at New York University School of Law, told Al Jazeera.

“It might sound like I’m being hyperbolic, but I would ask anyone … What would you do if you didn’t have a tampon or pad when you needed one?” she said.

Here, Al Jazeera looks at what exactly is going on:

What is causing the shortage?

The shortage has been caused by at least half a dozen combined factors, explained Pricie Hanna, managing partner at Price Hanna Consultants, a consulting firm specialising in nonwoven product markets and technology.

First among them are the supply-chain disruptions linked to COVID-19.

Even before the pandemic hit, US manufacturers imported much of the main raw materials needed to make tampons – namely, cotton and rayon (also known as viscose) – from Asia and Europe because domestic production was insufficient, Hanna told Al Jazeera.

“Since the pandemic, the flow and timing of global supply chains both shipping to the US, and trucking within the US, has been very volatile and unpredictable,” she said.

Meanwhile, the US is experiencing a labour and truck shortage that has disrupted the normal restocking of tampons at US stores. Tampon manufacturers also have been forced to raise their prices for consumers as the cost of cotton and rayon increased significantly during the last year, Hanna said.

News of the shortage also likely pushed consumers to begin to stockpile tampons, Hanna continued, while the final contributing factor, she said, is that with the warmer summer months arriving in the US, “We’re at the start of the seasonal increase of tampon usage in the US for swimming.”

How bad is the shortage?

That is a bit unclear. US manufacturers contacted by Al Jazeera did not quantify the problem when asked to provide figures or data.

The Wall Street Journal, citing data analytics firm IRI, reported this week that “an average of 7 percent of tampons were out of stock in US stores the week ended Sunday.” Arkansas and West Virginia were among the hardest-hit US states, the newspaper said.

“Elsewhere, several parts of Indiana, and the Jackson, Mississippi, and Wheeling, West Virginia, regions are experiencing short supply, according to IRI.”

What are tampon manufacturers saying?

Procter & Gamble, which produces Tampax tampons, told Al Jazeera in an emailed statement that this is “a temporary situation”.

“The Tampax team is producing tampons 24/7 to meet the increased demand for our products,” the company said. “We are working with our US retail partners to maximize availability, which has significantly increased over the last several months.”

A spokesperson for Edgewell, which produces Playtex and o.b. tampons and Carefree and Stayfree liners and sanitary pads, told Al Jazeera that “extensive workforce shortages caused by two separate Omicron surges” affected production – and therefore inventory – of its products at its US manufacturing facility in late 2021 and with a supplier in Canada in early 2022.

“We have been operating our manufacturing facilities around the clock to build back inventory and anticipate returning to normal levels in the coming weeks,” the spokesperson said in an email.

What are US retailers saying?

A spokesperson for Walgreens, a major chain of pharmacies across the US, told Al Jazeera in an emailed statement that the company “works diligently with our suppliers to ensure we have supply available”.

“However, similar to other retailers, we are experiencing some temporary brand-specific tampon shortages in certain geographies. While we will continue to have products at shelf and online, it may only be in specific brands while we navigate the supply disruption.”

A spokesperson for CVS, another popular pharmacy chain, told Al Jazeera the company was also working with its suppliers to ensure “an ample supply” of tampons in its stores.

“In recent weeks, there have been instances when suppliers haven’t been able to fulfil the full quantities of orders placed. If a local store is temporarily out of specific products, we work to replenish those items as quickly as possible,” the spokesperson said. 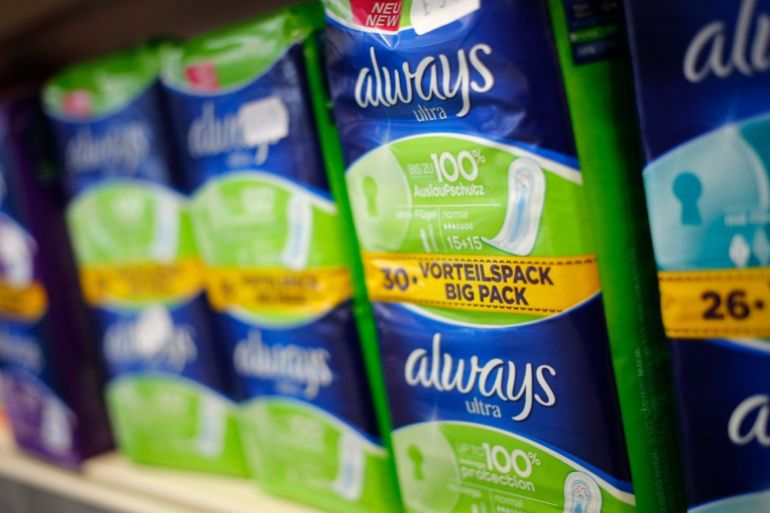 Feminine hygiene products are seen in a pharmacy in London, UK, March 18, 2016

This is not the first US supply-chain crisis during the pandemic, right?

Toilet paper was in short supply in the early days of the pandemic, as many consumers panic-bought large supplies. A continuing baby formula shortage has recently caused panic in the US, as children were hospitalised and desperate families frantically searched for supplies.

President Joe Biden instructed the Department of Defense to contract commercial planes to fly in baby formula from abroad, among other efforts to alleviate that latter crisis, but the shortage persists in many parts of the country.

Is the US government doing anything about the tampon shortage?

White House press secretary Karine Jean-Pierre was asked on Thursday whether the tampon shortage was on the Biden administration’s radar, and whether it was tracking any other potential shortfalls of other products. “I would have to check in with the team on what they’re tracking. I don’t have a list for you right now,” she replied, without addressing the tampon issue.

US Senator Margaret Wood Hassan wrote a letter to Procter & Gamble CEO Jon Moeller this week, urging the company to “take quick action” on the shortage. She also condemned “price gouging” and asked Moeller to provide “justifications for the price increases that we have seen over the past year”.

“Access to menstrual products should be treated like every other essential good. At the beginning of the pandemic, price gouging of essentials like toilet paper, cleaning supplies, and hand sanitizer was rightly criticized as an exploitation of an emergency for financial gain. Menstrual products should receive that same consideration,” Hassan wrote.

What does this leave people to do in the meantime?

Hanna said people are likely seeking out alternatives to their preferred products for the time being.

“They may be recalibrating exactly how to provide that protection based on what they were able to buy this week,” she told Al Jazeera. “I think we may already see this week some improvement in the shelf availability in retail stores, but it honestly depends very much on what store you look at and what time of day you check it.”

Already, many in the US struggled to afford tampons, however, even before the recent price increases or the shortage.

A 2019 survey of low-income women in St Louis, Missouri, found that 64 percent said they were unable to afford menstrual products in the previous year, while 21 percent said they faced that problem every month. “Nearly half of women (46%) could not afford to buy both food and menstrual hygiene products during the past year,” it said.

For years, rights advocates, healthcare professionals and other experts have lobbied legislators to provide free menstrual products for all who need them, and to stock free tampons, pads and other products in public schools, prisons and other facilities.

“One of the slogans that a lot of folks who have been doing this organising … over the past couple of years is that ‘periods don’t stop for pandemics.’ And periods also don’t stop for supply shortages,” said Weiss-Wolf at the Brennan Center for Justice.

“So if we’re having some sort of supply-chain issue, and it’s harder to obtain products, it is up to our elected officials to ensure that the cost of that shortage doesn’t fall on the backs of the people who need these products the most, and for whom not having them will cause the most hardship.”

Blah blah 217 days ago
Insanely blocking cotton from Xinjiang can only lead to more price rise and supply chains blockage. But hey, why should that matter? People affected are only poorer women who have no right to control their body anyway. Sanctioning cotton makes us feel powerful and morally righteous - and that is what matters.

Oh ya 223 days ago
Not a problem. You can go to any university in a blue state and get some out of the mens bathroom. They started stocked mens bathrooms a year ago because the retards believe men have menstrual cycles also.so you how easy it is to stop a shortage. Liberalism is a mental health problem
View all comments (2)Add comment