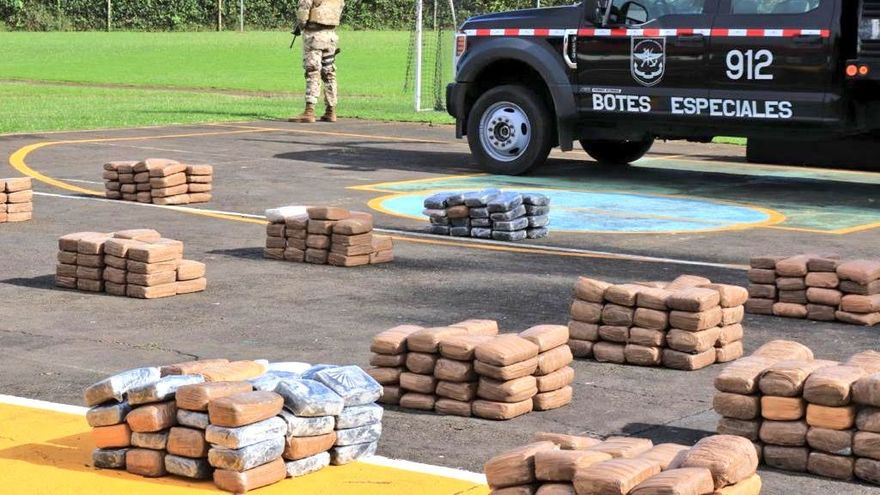 Units of the Panamanian Air Force, with the support of the Colombian Navy, seized 945 drug packages after the location of an unmanned speedboat in the waters of the Panamanian Pacific, official sources reported this Thursday.
The drug, not determined by its weight or type, was found within 30 packages that were hidden in the brush in the vicinity of where the boat was located.

This operation was carried out on San José Island in the Las Perlas Archipelago, in the Eastern Pacific, with the support of a patrol boat from the National Aeronaval Service of Panama ( Senan) and a maritime patrol plane from the Colombian Navy.

The Chief of Operations of the Aeronaval Service, Edison Castillo, explained that this operation was carried out in coordination with the National Police of Panama (PN), and also thanks to the joint effort with the Colombian Navy.

Castillo said that the seizure of the narcotics was achieved after the interception of the boat which did not have any type of crew, and that later on a tour of the Island of San José it came across the 30 packages of drugs.

He explained that the drug, which when counted, threw 945 packages, was transferred to one of the Senan bases, after coordination with personnel from the anti-drug prosecutor's office of the Public Ministry.

The Senan Chief of Operations added that with these actions against illicit maritime traffic, the security forces send a message to the public that they can trust their security forces, which are there to safeguard the lives, property and honor of all citizens in the national territory.

In turn, the director of the PN, Jorge Miranda, affirmed that within the Public Force there is a certainty that teamwork has been our strength, and the collaboration we receive from our counterparts abroad is which allows us to have this type of results.

During this 2020 the National Aeronaval Service has developed 72 operations against illicit maritime traffic, achieving the total confiscation of 39,789 packages of illicit substances.

In 2019, the security forces of Panama seized 90.99 tons of drugs, the vast majority cocaine, a record for this country, and arrested 1,013 people linked to drug trafficking, 10% of them foreigners.

Panama is used by transnational drug trafficking groups as a bridge to transfer the drug produced in the south of the continent and its main destination is the United States, the world's largest cocaine consumer.
Add Comment