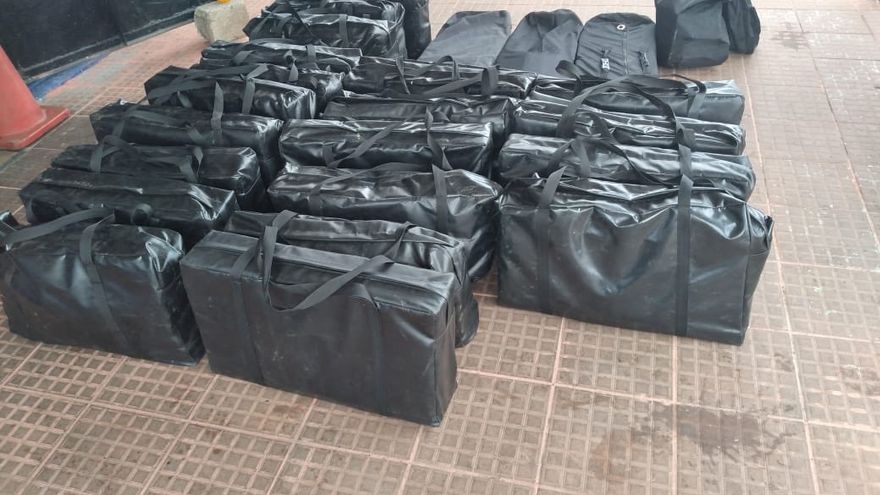 9 tons of cocaine seized in Colombia, Panama and the Dominican Republic

Colombian authorities, in collaboration with those of the United States, seized more than nine tons of cocaine in operations carried out between October 23 and 28 in the Andean country, in Panama and the Dominican Republic.
This was reported this Thursday by the attorney general of Colombia, Francisco Barbosa , who assured in a statement to the press that several operations were carried out "that made it possible to impact the transnational crime that plagues Colombia and the United States."

"This week we managed to capture 21 people, alleged members of a transnational organization at the service of the. Some of them had arrest warrants for extradition purposes," said Barbosa.

The prosecutor pointed out that they destroyed two clandestine airstrips in a rural area of ​​the municipality of Uribia, in the Caribbean department of La Guajira, which "had been used for the takeoff and landing of aircraft dedicated to drug trafficking."

"In the fight against national and transnational crime (...) they seized more than nine tons of cocaine in various operations carried out in seven (of the 32) departments of the country," said the prosecutor.

In one of the operations, the Police, the Prosecutor's Office and the Navy stopped a boat carrying 2.6 tons of cocaine in the municipality of Necoclí, in the department of Antioquia (northwest), and four people were detained.

Meanwhile, the authorities managed, in international waters of Panama, to intercept a boat that was transporting 142 kilos of cocaine hydrochloride, as well as captured a Colombian and a Honduran.

In that country, 600 tons of cocaine were also seized in the port of Panama City, which were hidden in a container that had been brought there from the Colombian region of Urabá.

"On October 24, the Prosecutor's Office and the Police achieved the seizure, in the Santa Marta Port Society, of 17.34 kilograms of cocaine hydrochloride that they intended to be concealed in a container bound for Antwerp," added the Prosecutor it's a statement.

Meanwhile, the authorities seized 760 kilos of drugs in a search carried out in a parking lot in the municipality of Chinchiná, in the tourist region of Eje Cafetero, as well as 2.1 tons in Antioquia.

Two tons of cocaine were also seized in Tumaco, in the department of Nariño (southwest), and three Ecuadorian citizens, one Mexican and one Colombian, were arrested, while 678 kilos were seized in Cartagena de Indias.

The last two operations occurred in the municipality of La Plata, in the southern department of Huila, where 64 kilos were seized, and in international waters of the Dominican Republic, where 280 kilos of cocaine were seized.

"With these concrete, demonstrable facts, our commitment against crime is evident, and the strength of our binational ties with the United States and international ties with different countries in this frontal, indeclinable and definitive fight against drug trafficking in Colombia," said Barbosa.
Add Comment